It's rare to see a fourth-round pick make the kind of impact that Eddie Jackson has made for the Chicago Bears. In his two seasons with the team, the former Alabama safety has scored almost as many defensive touchdowns (5) as he's allowed while in coverage, he ranks second among safeties in that span with 12 pass breakups, and he's tied for third with eight interceptions. While his two-year coverage resume is good enough to make even the most confident of offensive coordinators think twice, it's his stellar play this year that has separated him further from the pack, pushed his name among the league's best at the position and, quite rightly, made him a candidate for Defensive Player of The Year. 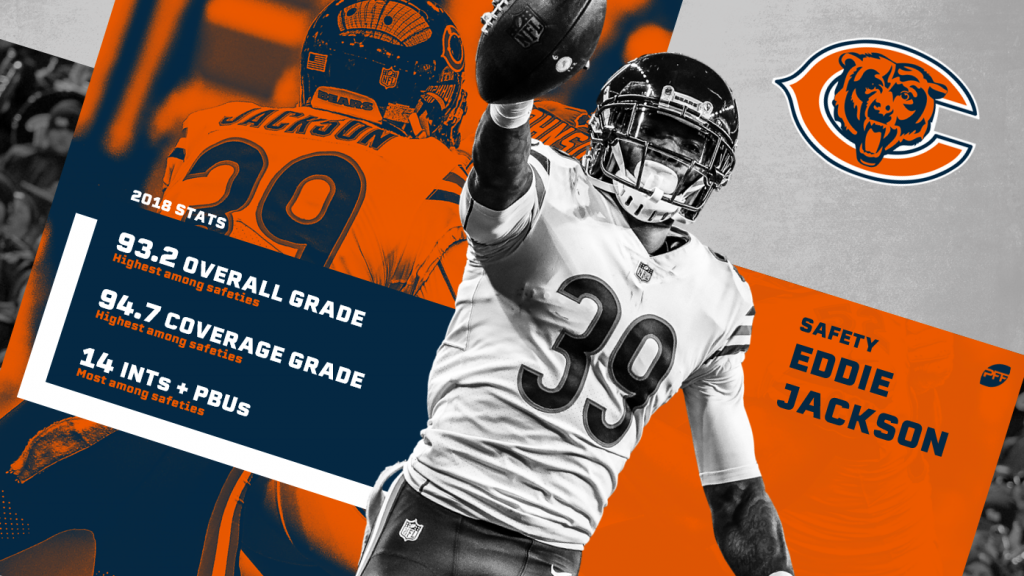 Simply put, Jackson's body of work across his 589 coverage snaps this year has been some of the best that we've ever seen from a safety. In his 14 games this year, the sophomore standout's performance in coverage has earned a coverage grade of 94.7, which not only leads all defensive players in the NFL this year, but it's tied for the best mark ever recorded by a safety in the PFF era (2006-present), narrowly beating out Ravens legend Ed Reed (92.7, 2009) and the current holder of PFF's Dwight Stephenson Award, Harrison Smith (92.2, 2017).

Jackson has been targeted 44 times this year — which is the 13th-most among players at the position — but he's allowed just 24 receptions for 256 yards, three touchdowns and six interceptions. His 54.5% catch rate allowed is the fourth-best rate among 64 safeties with at least 20 targets this year, his 54.7 passer rating allowed ranks fifth, and his average of 0.43 yards allowed per coverage snaps puts him 12th.

Never straying too far from his regular spot as the center-fielder of the Bears' defense, Jackson has spent 464 of his 589 coverage snaps (80.5%) lined up at free safety, and it's a position that suits him well, as his speed and athleticism allows him to quickly diagnose and pounce on the passes that are thrown his way.

The above play, a signature pick-six in Week 11 against the Vikings, is a perfect example. Here, Jackson identifies the route concept and the target and breaks on the route before the receiver does. That next-level sense of anticipation has been the trademark of his 2018 season.

Again, this time from more of a strong safety look, he reads the play perfectly, times his jump perfectly, and turns what would have been a short gain for the Lions into a touchdown for the Bears.

Like all the great free safeties that have come before him, Jackson often starts from the back of the defensive formation and is the last line of defense against the deep pass. And like all the great safeties that have come before him, Jackson has the speed, ability and ball-hawking instincts required to quickly move quickly from the center of the field to either sideline. Throughout the year, Jackson has put these skills on full display and has been as stingy as they come in coverage against the deep pass. Through 16 weeks, Jackson has been the primary coverage defender on five deep passes, and he's intercepted more passes (2) than passes he's allowed to be completed.

In the above play, Jackson shows all the traits that make him one of the best free safeties in the league. Coming out of his spot at the top of the defense, he quickly recognizes the target and knows where the ball is going to go. He quickly crosses half the length of the field to secure the interception for his team.

It's playmaking ability like this that has made him so invaluable to the Bears' defense this year, and it's not just because of the interceptions that he's coming down with. Through 16 weeks, Jackson has racked up eight pass breakups while in coverage — which leads the league's safeties this year — and his combined 14 pass-breakups and interceptions are tied for the third-most ever recorded by a safety in a single season. All told, he's got his hands on 31.8% of the passes that have been thrown into his primary coverage, which ranks third among safeties in the PFF era, falling just shy of Kevin Byard‘s 2017 mark of 31.9% and the Legendary Troy Polamalu's 2008 mark of 34.0%.

The above play is just one example of the very many breakups that Jackson has produced this year, but it's his recovery here that makes the play all the more impressive. Here, he lined up a little closer to the line of scrimmage than he usually does, and he originally bites on Eli Manning‘s fake handoff to Saquon Barkley. When he recognizes the play-action, Jackson quickly gets himself back into the play, latches on to Odell Beckham Jr. on the deep over and makes a play on the ball. The recovery is a shining example of the freakish athleticism that Jackson possesses, and without him, this play and likely many others would have been completed.

Instincts like this, the ability to read the game and break on plays before they've even developed is a key feature of Jackson's game, and it's not just coming to fruition in the form of highlight-reel pick-sixes and impressive pass breakups. Jackson has already forced two fumbles this year, both against the pass. The most notable, which he returned 75 yards for a defensive touchdown, was a product of another lightning-quick break on tight end Jason Croom in the flat.

Jackson’s breakout campaign has been one of the most impressive we’ve ever seen from the safety position – and his performance this year has both put him amongst the very best ever to play the position and amongst the list of names that should be considered for Defensive Player of The Year honors. Whether he will take home the awards will remain to be seen, but one thing is for sure, the sophomore free safety, a part of a Bears stellar defense, is a bonafide star in the making and is a huge reason why the Bears could very well make some noise in January.