Broncos Stadium at Mile High will have a few new faces in 2019. 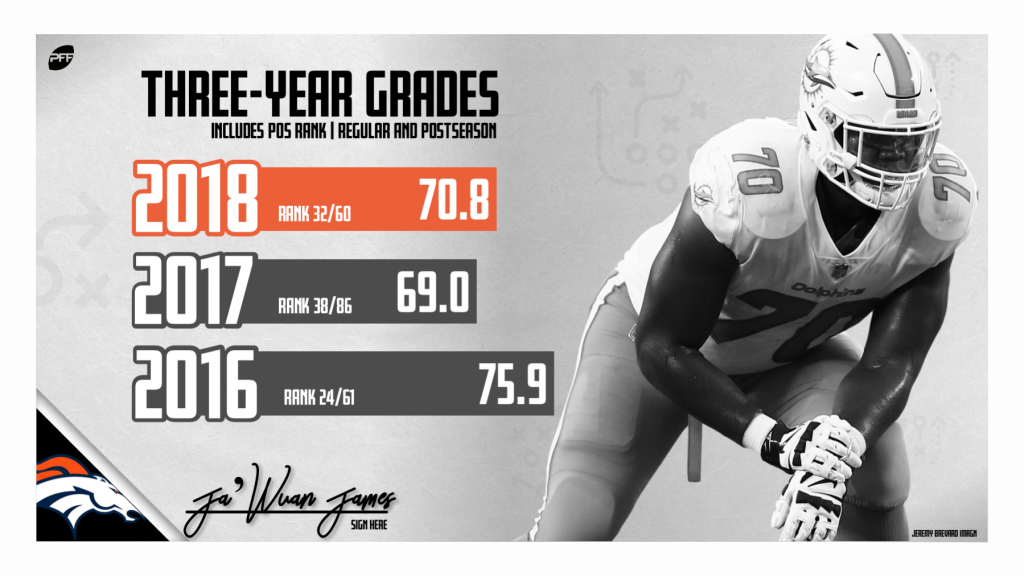 According to SportsTrust Advisors, the sixth-year right tackle signed a four-year contract with the Broncos on Monday night, a deal that's worth $51 million and $32 million in guaranteed money.

It's tough to find average to slightly-above-average offensive tackles in the NFL, so when one does come around in a relatively weak free agent offensive tackle class, it usually results in a team paying them a premium – and that's exactly what's happened here. James, who has never graded below 63.0, yet has never graded above 76.0, hasn't ended a season ranked among the top-25 offensive tackles in the league. His highest-graded season, which came in 2016, earned only a 75.9 overall grade that ranked 28th among 84 qualifying players at the position.

While James' numbers are uninspiring at first glance, he's actually an upgrade over everyone that the Broncos have fielded at right tackle over recent seasons. The Broncos haven't had anyone register a grade of more than 70.0 from the right tackle spot since 2014, when Louis Vasquez recorded an overall grade of 71.8 from his 642 snaps on the right side of the line. In fact, James' career-best single-season grade would tie Orlando Franklin for the third-best single-season mark ever recorded by a Bronco, while his 2018 mark of 70.8 would rank as the 10th-best.

James will now step into the right tackle spot on the Broncos' offensive line, and the team will hope that this move goes a long way to fixing a problem that's been evident for some time. Over the last five seasons, the Broncos' right tackles have combined to allow a staggering 272 quarterback pressures – the sixth-most among teams in that span – while those right tackles have combined to produce a pass-blocking grade of 54.3, which is by far the worst. James, who has allowed just 110 pressures in the same span, now has the chance to live up to his title as the highest paid right tackle in the NFL.