With the exception of the NFL Draft, the first wave of the free agency period is often the most exciting time of the offseason. While we may not get any action on the gridiron, we do get the excitement of seeing star players signing huge new deals with new teams, and we can often see superstar players being traded away in moves that seemed nearly impossible in January.

However, with the dust now settled on both the former and the latter, it's time to look towards the second wave of free agency, where remaining free agents will schedule visits with teams in the hope of signing deals before the start of the 2019 NFL season. Some are proven veterans; others are trying to revive careers that have taken an unexpected turn – here are the best team fits for PFF's highest-graded remaining free agents.

[Editor’s Note: Subscribe to PFF’s ELITE – Annual or ELITE – Monthly subscriptions to access Premium Stats 2.0 to learn the ins and outs of every player your favorite team has signed this offseason.]

Despite a shortened season in which he played just 237 snaps, Mitchell impressed in 2018 and earned an overall grade of 81.1 for his efforts. He recorded 12 defensive stops, which was more than he had in a single season with the Pittsburgh Steelers from 2014-2016 – and he played 1,000-plus snaps in those three seasons. Even at age 31, Mitchell can still patrol the back end at an above-average level.

The Bears have their current starters locked in with Eddie Jackson and Ha Ha Clinton-Dix manning both safety positions. However, behind those two, it is anyone’s guess on how the depth chart will shake out. Mitchell could easily slide in as an immediate depth option at the safety position for one of the NFL’s premier defenses. 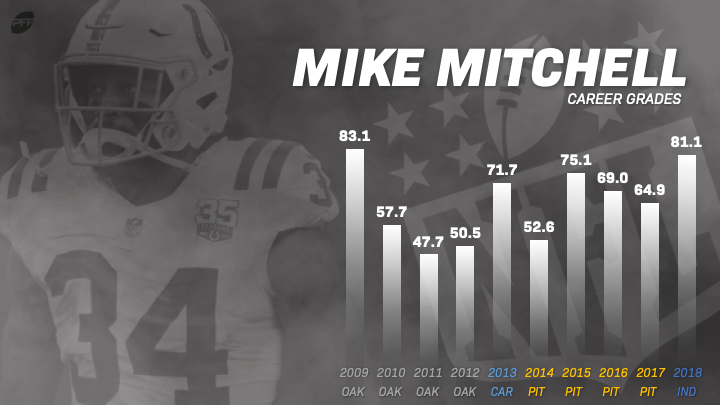 Ansah’s best season — in 2014, where he generated 64 quarterback pressures and earned an 82.5 overall grade — is getting further and further behind him. A team will have to hope Ansah is able to turn back the clock following an injury-riddled year in 2018 where he earned a 74.5 grade.

Now that the NFL Draft has come and gone, a team like the Raiders could be an option for Ansah for a low risk, high reward type of deal. Oakland’s edge unit is suddenly filled with potential with Clelin Ferrell joining second-year pass rusher Arden Key. However, signing a veteran option like Ansah could boost their edge-rushing rotation if he can show he’s worthy of a roster spot.

At only 26 years old, Boston will be more than serviceable to any remaining team that needs a deep coverage safety in 2019 and beyond. He is highly underrated for a guy who earned a coverage grade of 89.0 in 2017 and a 78.2 last season. He has developed a reputation for making plays on the ball, as evidenced by his 10 combined interceptions and pass breakups on 30 targets last season.

The Jaguars would be an ideal landing spot where Boston could battle for a starting safety role. After cutting loose Tashaun Gipson Sr. this offseason, the need for a deep coverage safety is there for a Jaguars’ defense that is looking to regain their elite 2017 performance. 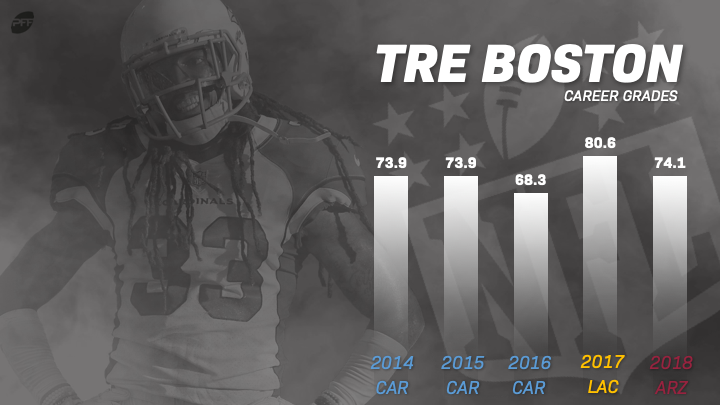 Inman turned in a career performance in the Colts’ Divisional Playoff matchup with the Chiefs this past season, earning a career-high 89.8 single-game grade. Though he is entering the 2019 season at 30 years old, the 6-foot-3, 205-pound Inman offers value as a short-term solution for a team such as Detroit, a team that needs depth at outside wide receiver.

The Lions’ passing attack has the potential to thrive this upcoming season with receivers Kenny Golladay, Marvin Jones Jr., and Danny Amendola penciled in as starters. They also added versatile tight end T.J. Hockenson in the first round of the NFL Draft. However, their depth is lacking on the outside. Inman would provide a secure backup option with enough playmaking ability to contribute in multiple receiver sets.

Question marks surrounding Ajayi’s health have kept his free agency quiet thus far, but the skillset is there for him to take on a lead role for an NFL team willing to take a low-cost bet in hopes of getting the playmaking ability he displayed with the Miami Dolphins in 2016. Ajayi earned a career-high 77.3 overall grade and forced 62 missed tackles that season.

Tampa Bay has quietly assembled a talented group of pass catchers in Mike Evans, Chris Godwin, and tight end O.J. Howard. Adding in a talent like Ajayi could take their offense to the next level. The Bucs also have enough depth at running back with Peyton Barber and Ronald Jones in his second year if Ajayi is forced to sit due to injury.

However, a team needing receiving depth such as the Packers could still provide a soft-landing spot for Garcon. Their current depth chart at receiver behind Devante Adams is filled with unproven talent with the likes of Marquez Valdes-Scantling, Geronimo Allison, and Equanimeous St. Brown. 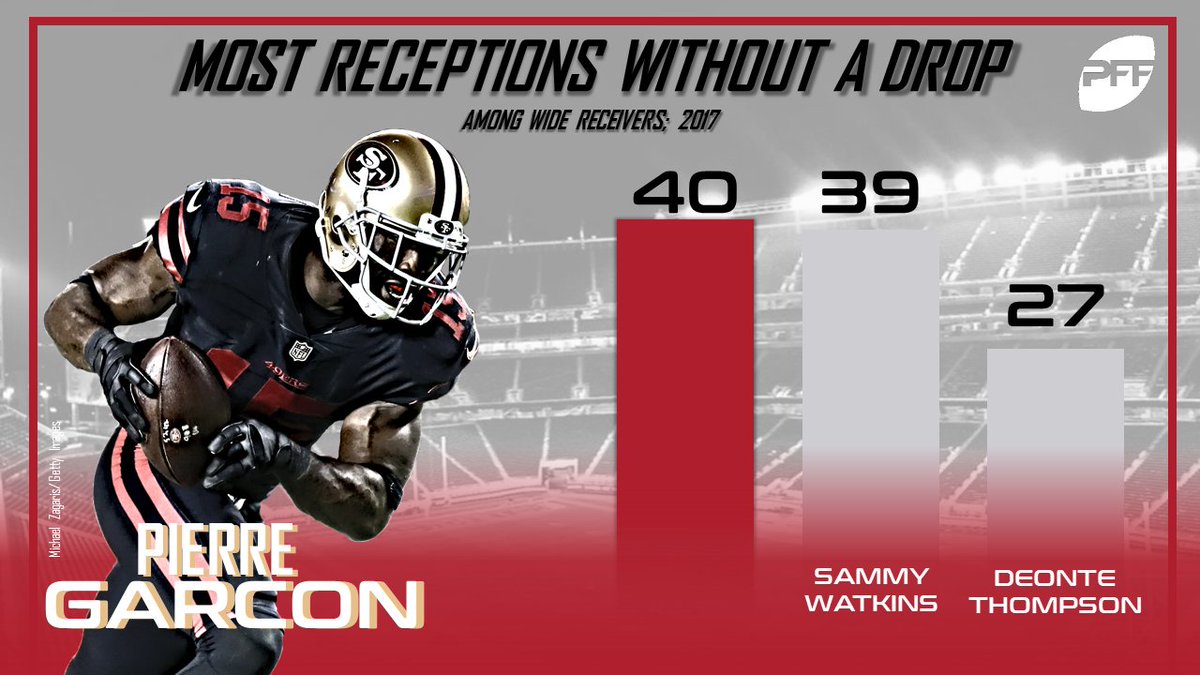 Right tackle Ryan Schraeder never quite looked like himself during the 2018 season with the Falcons. After allowing eight pressures in Week 1, he bumbled through his lowest-graded season as a starter at 63.7 before eventually being benched late in the year.

However, in seasons 2014-2017, his overall grade never dipped below 70.0. He still has starter-level ability If he’s able to put 2018 behind him with a change of scenery. A team like the Chargers would be an ideal free-agent landing spot for Schraeder where the right tackle position is up for grabs. Last season’s starter Sam Tevi finished with a 53.7 overall grade on 1,009 total snaps and allowed 73 total pressures – the most among all offensive tackles. Schraeder would be an immediate upgrade.

Buck Allen’s production has mostly been driven by volume throughout his career. After a career-year in 2017, he dropped off from a 68.7 overall grade to 63.1 this past season. He’s proven that he can be a reliable backup running back with a knack for finding the end zone from in close.

A team like the Dolphins could use Allen’s abilities to the fullest after seeing veteran Frank Gore bolt for division-rival Buffalo this offseason. Running back depth is lacking behind Kenyan Drake and second-year player Kalen Ballage, and Allen would likely carve out of a role with his unique skill set as a depth option at the position.

Kearse’s two-year stint in the Big Apple with the Jets in 2017 and 2018 didn’t go as planned, as he earned sub-70.0 overall grades in each of the two years and caught just six touchdown passes. However, the 29-year-old wideout still offers upside as an option with the ability to move the chains.

If signed by the Giants, Kearse would have the opportunity to earn a significant role behind the newly signed Golden Tate and budding star Sterling Shepard, while providing Eli Manning (or Daniel Jones) steady hands. Kearse has just 23 drops on 469 targets throughout his career.

Injuries have kept him from being the Eric Berry we all know and love, but he’s too talented when healthy to remain unsigned. In 2016, Berry earned an 89.9 overall grade across 1,151 defensive snaps in Kansas City.

The Cowboys have been rumored to be in the mix for a number of safeties throughout the offseason, and they eventually brought in George Iloka to compete for a roster spot. Berry would be an immediate upgrade at the position, and he would provide an influx of veteran leadership among a defensive back unit filled with youthful playmakers.

Edge defender Derrick Morgan has regressed over the last three seasons in Tennessee, and he finished with a 61.9 overall grade in 2018. In his nine-year career, he’s posted an overall grade over 75.0 just once (2014) and, he's generated over 60 total pressures twice (2012 and 2016). Still, his ability on the edge would provide serviceable depth for teams lacking consistency at the position.

The Lions' defensive front has a chance to be special this season with Damon Harrison Sr., A’Shawn Robinson, and Da’Shawn Hand on the interior and Trey Flowers setting the edge. With unproven talent behind this group of starters, adding Morgan would be a key move to provide depth that will likely push this unit to among the best in the NFL in 2019.

After showing out in 2016 with 45 quarterback pressures (including 10 sacks), Shane Ray had an injury-riddled 2017 and hasn’t quite looked the same since. As a result, he saw decreased snaps in 2018 and managed just 10 pressures on 138 pass-rushing snaps for a career-worst 4.0 pass-rushing productivity rating.

If he’s able to regain his 2016 form, he’d be a steal as a late free-agent add for an edge-rushing needy team like the Rams. With the Rams lacking depth along the defensive line rotation, Ray could be an immediate pass-rushing option with the ability to earn significant playing time if he’s able to produce a season similar to his 2016 breakout.