T.J. Hockenson should be the best tight end that Matthew Stafford has ever played with | NFL News, Rankings and Statistics | PFF
All
NFL - current
Fantasy
College
NFL Draft
DFS
Betting

T.J. Hockenson should be the best tight end that Matthew Stafford has ever played with

During his first season in the Motor City, Detroit Lions’ head coach Matt Patricia brought a philosophy that quarterback Matthew Stafford hadn’t seen before — a focus on the run game. As a result, Stafford failed to reach the 4,000-yard passing plateau for the first time in a season in which he played 16 games.

Even with Patricia’s emphasis on the run game, the NFL is still a passing league, and that means teams need as many receiving threats on the field as possible at any given time. One way to affect both phases of the game is by having a tight end who is a mauler as a run-blocker and an imposing threat as a pass-catcher. Enter the eighth overall pick of the 2019 NFL Draft: Iowa tight end T.J. Hockenson, who is one of the best all-around tight ends to enter the NFL in some time. 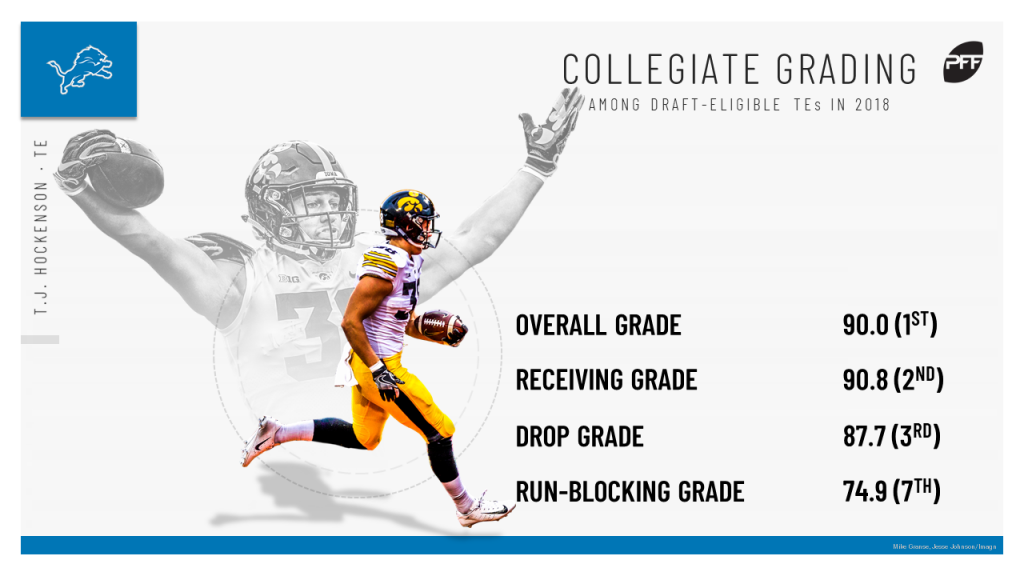 Adding Hockenson isn’t the first time the Lions have tried giving Stafford a reliable weapon at the position early in the draft. Rewind 10 years to 2009 when Stafford entered the league as the first overall pick before being followed by tight end Brandon Pettigrew 19 picks later. Pettigrew, along with wide receiver Calvin Johnson, quickly became the young quarterback’s favorite targets.

The Lions led the league from 2009-13 in targeting the tight end position with 780 targets, and Pettigrew’s 433 targets led the team during that span. During that time though, Pettigrew failed to eclipse a 70.0 overall grade, in large part due to his drop rate of 12.0%.

Prior to the 2014 NFL Draft process, Eric Ebron — a 6-foot-4, 250-pound tight end with a 4.6s 40-yard dash time — burst onto the scene. In hoping to give Stafford another explosive, athletic receiving option at the position, the Lions fell in love with Ebron and selected him with the 10th overall pick of the draft. But it was the recurring theme of heavy targets to little production: Ebron was targeted 277 times in Detroit before his departure in 2018, and like Pettigrew, Ebron failed to reach the 70.0 overall grade threshold. 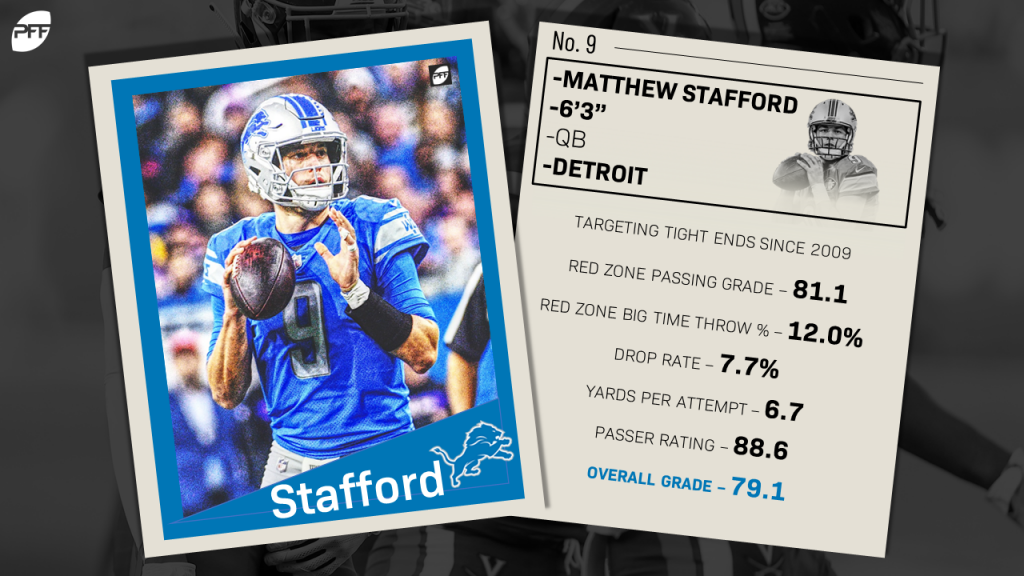 While Stafford’s tight ends have accounted for a drop rate of 7.7% since 2009 — the fifth-worst rate in the NFL — the quarterback hasn’t particularly helped his tight ends throughout his career. Since entering the league, Stafford's grade when targeting the position is just 79.1 — 28th among qualifying quarterbacks in that span.

However, one area that Stafford has excelled in during his time in the NFL is targeting his tight ends is in the red zone. Since 2009, he's earned an 81.1 passing grade when targeting his tight ends inside his opponent's 20-yard line, placing him ninth among qualifying signal-callers in that time. Even with a 6-foot-5 wide receiver that could jump out of the stadium in Calvin Johnson, Stafford’s red-zone passing grade jumped nearly 20.0 points between wide receivers (63.8) and tight ends (81.1).

All of the focus on tight ends in Stafford’s early career was in part due to running multi-tight end sets. The Lions had two or more tight ends on the field 37% of the time from 2009-13, which was even more than the Darrell Bevell-led Seattle Seahawks (35.8%). But from 2013-18, the Lions rarely used multi-tight end sets, as those packages plummeted to just 17.5% of their plays. 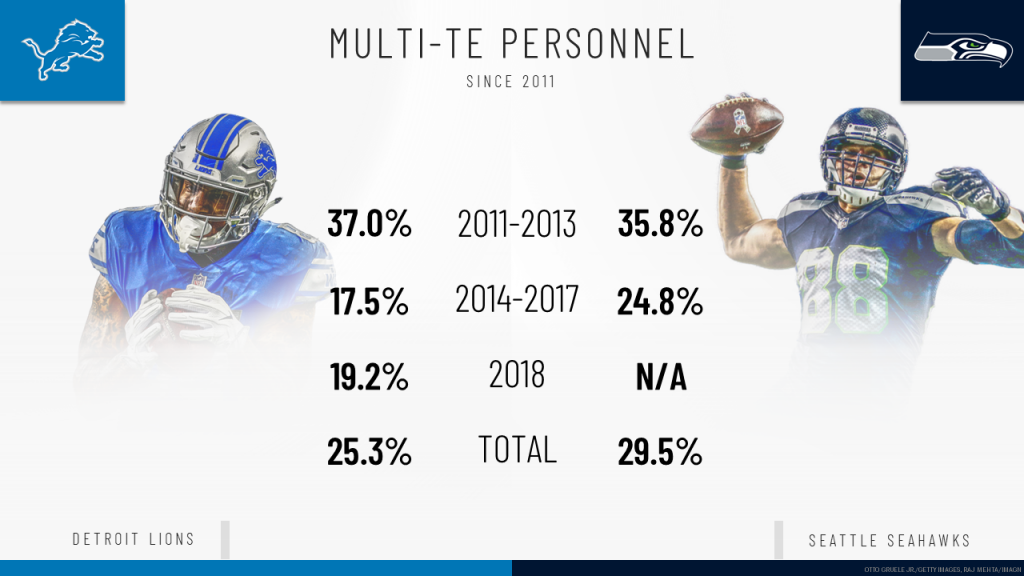 Bevell is now residing in the Motor City as the Lions’ offensive coordinator, which means Stafford and company can expect some more use out of the tight ends in 2019. And the team seems to fully expect that after a complete overhaul at the position, adding two through free agency and two more via the draft.

Stepping up his game significantly, Hockenson is one of just three tight ends since 2014 to earn a 90.0-plus overall grade, a 90.0-plus receiving grade, an 80.0-plus drop grade and a 70.0-plus run-blocking grade in their final college season. Coach Patricia is certainly trying to replicate the New England Patriots mold and Lions’ fans are hoping that Hockenson can be the Rob Gronkowski-esque playmaker for the offense. Hockenson should, at the very least, be the most dependable tight end Stafford has played with in his career, as the former Hawkeye dropped only two of his 75 catchable passes that came throughout his college career.

The Lions will be hoping that the third time is the charm for finding Stafford a tight end that can open the middle of the field and allow Kenny Golladay and Marvin Jones Jr. to continue making plays outside. Hockenson’s ability to affect the game in multiple ways is something that Pettigrew and Ebron failed to do during their tenures in Detroit, and it should help not only Stafford but the Lions’ offense in its entirety. A second straight successful draft by Patricia and company could help the Lions rise from the cellar of the NFC North and build a winning franchise straight from the New England mold.