In lieu of our regular PFFELO Power Rankings piece, we’re going to revisit the remaining playoff odds for the eight teams left in the NFL playoffs. 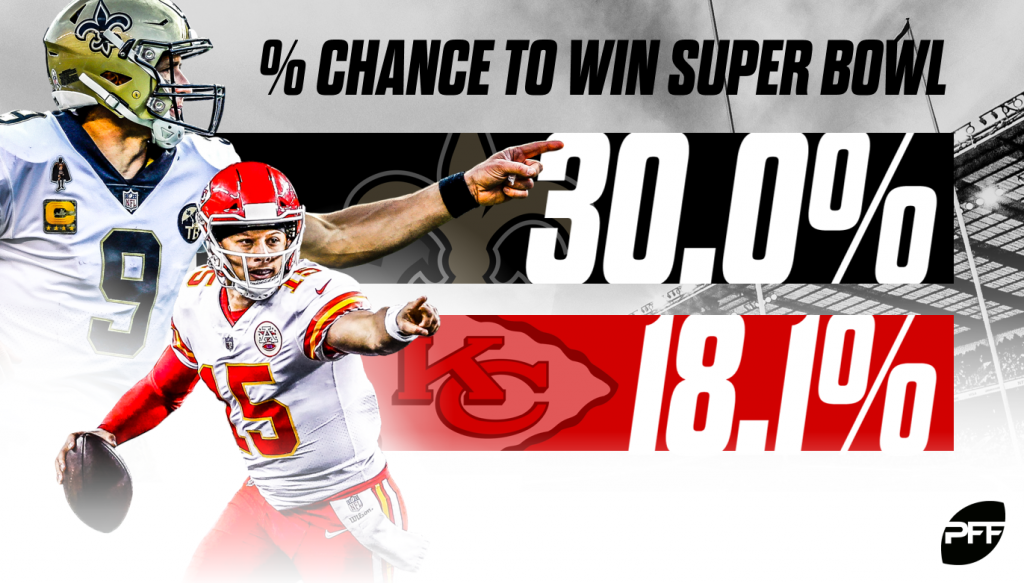 Currently a coin flip favorite to come out of the NFC, the Saints have by far the best chance of hoisting the Lombardi trophy in four weeks. Drew Brees may not be having an MVP season and may not even be having the best season of his career, but splitting 5.3/1.8 big-time throw to turnover-worthy play percentage and an EPA per attempt of 0.27 means he is clearly having the best runner-up season in history. Defensively, they have definitely improved over the latter half of the season, and their ability to get off the field on third down will go a long way towards determining their success against the Eagles on Sunday.

The favorite to come out of the AFC, the Chiefs have what is shaping up to be an extremely challenging stretch of potential games against the best veteran quarterbacks in the NFL. Patrick Mahomes has the opportunity to solidify himself quickly amongst the very best and has the comforts of home in his corner. Most would expect a potential playoff slip-up from a young signal caller, but Mahomes quite simply had the most impressive debut season from any quarterback in NFL history. Only three quarterbacks over five total seasons generated a higher EPA per attempt than Mahomes did in 2018. Tom Brady once, Aaron Rodgers and Peyton Manning twice. It will be a joy to watch the potential track meet against the Colts on Saturday.

Commentators, analysts and betting markets continue to forecast demise for the Patriots off of their super bowl loss due to the age of Brady, Gronkowski, Belichick et al. Still, come January, there are very few coaches you would rather have than Belichick and even fewer quarterbacks you would rather have than Brady. The Patriots haven’t exactly fallen off the wagon yet in 2018, as they are a very close third to the Chiefs and the Chargers in early-down EPA per pass attempt. Rested, off their bye, facing the Chargers – who are on their second straight week of cross-country travel and early-game time –  has most outside indicators leaning Patriots. Hopefully, this game comes down to who has the ball last between Brady and Rivers, which is something we would all gain from in the end.

The Rams identify as the biggest disagreement between our ELO model and consensus betting markets to win the Super Bowl. At an implied market price around 18%, our odds fall closer to 12% with the main difference being where we classify Jared Goff compared to the three quarterbacks directly above him. Yes, potential team MVP Todd Gurley should be well rested, but most know that this team will only go as far as Goff is able to take them. Over the final six regular-season games, Jared Goff has split a 23.9/15.6 positively graded to negatively graded throw per attempt which is adjacent to Dak Prescott’s season splits and doesn’t offer any of Dak’s rushing upside. If Goff cannot get it done through the air on early downs, Gurley will need to generate massive yards after contact to stave off an early exit for the Rams.

The Chargers had their third opportunity to go on the road and avenge a home loss earlier in the season and came out a winner against the Ravens. It’s difficult to glean much from that game because the Ravens operate offensively in a way that’s so different from other teams, especially the Patriots. The oddsmakers, however, give the Chargers the best shot of all of the underdogs this weekend, installing them as four-and-a-half-point underdogs in Foxboro (a number we largely agree with). Eleven years after losing there in the AFC Championship Game on a torn ACL, will Philip Rivers finally get his revenge or will the Patriots make it their eighth-consecutive AFC Title Game appearance?

Aside from one turnover-worthy throw, and another that was turned into an interception via a drop, Nick Foles played admirably against the best defense in the NFL on Sunday on the road in Chicago. He’s not getting much help from his running game (only six yards before contact on 23 carries versus the Bears), but his connection with Alshon Jeffery has been one of the league’s best since he took over. On 26 targets the last four weeks, the former Bear has caught 22 and turned them into 383 yards and two touchdowns. The Saints have improved defensively since the start of the season, but Jeffery, Zach Ertz, Dallas Goedert and company can continue to win at the rim against the likes of Eli Apple this coming weekend, Big Richard Nick might end up starting his second-consecutive NFC Title Game.

The Colts are riding high right now, having won 10 of their last 11 games, with Andrew Luck generating an outrageous five big-time throws to zero turnover-worthy plays against the Texans last week in Houston, chipping in another 11 positively-graded throws that were not big-time throws. As we move forward on this Indy team, it’s important to point out that, aside from the Bears, no team had an opponent PFFELO rating that was lower on average than the Colts (the Texans were not far behind). Thus, a step up in quality of opposing quarterback, coach and venue this week might be a humbling one this weekend, but I have a hard time doubting Andrew Luck anymore in these situations.

After what was the least-impressive win of the Wild Card weekend, Dallas was the only home team to escape with a victory and draws Los Angeles in round two. Dak Prescott and the Dallas offense has improved their lot over the second half of the season by getting the ball to their playmakers in Amari Cooper (106 receiving yards on 37 routes run against the Seahawks) and Ezekiel Elliott (second among running backs in total receiving yards during the Cowboys 8-1 run). The Rams have steadily improved defensively, so Dallas will have to hope that the regression seen in their offense can be exploited enough by their defense to keep this close in Southern Cal.