INDIANAPOLIS, IN - NOVEMBER 20: T.Y. Hilton #13 of the Indianapolis Colts catches a pass while being guarded by Perrish Cox #20 of the Tennessee Titans during the fourth quarter of the game at Lucas Oil Stadium on November 20, 2016 in Indianapolis, Indiana. (Photo by Stacy Revere/Getty Images)

With all but one of Week 5’s games in the books, it’s time to check in on another PFF Elite stat, and this time, we’re going to focus on the league’s wide receivers, and the leaders in terms of yards per route run.

The Pro Football Focus “Yards per Route Run” figure takes into account the number of snaps a player went into a pass pattern, which provides a better indicator of production than yards per reception or even yards per target. 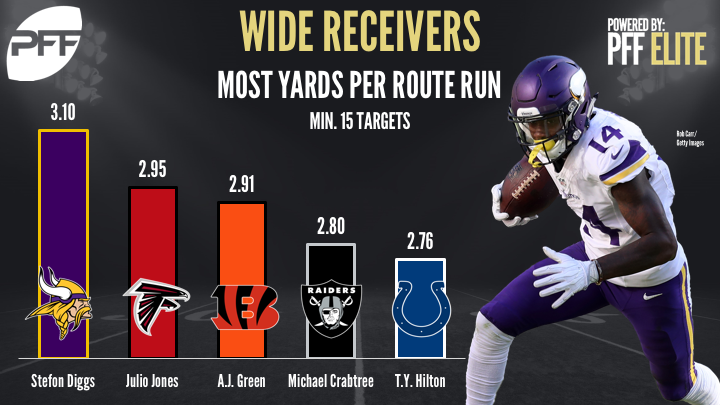 Stefon Diggs has played one less game than the field and still has the fifth most yards among receivers. This is a true testament to how productive he’s been so far this season. Even without his starting quarterback in Sam Bradford, Diggs has tallied 391 receiving yards, including 218 yards on deep passes (passes that travel at last 20 yards in the air) and put up more yards on a per route basis than anyone else. A strong performance against the Chicago Bears on Monday Night Football could see him pull further away from the pack.

Julio Jones is no stranger to this list, having finished with the most yards per route run in three of the last four seasons. With no signs of slowing down under new offensive coordinator Steve Sarkisian, Jones has caught all 19 of his catchable targets and amassed 295 yards from the 100 routes he’s run in 2017.

A.J. Green has been somewhat hindered by the Bengals offensive struggles this year, but his seven catches for 189 yards against the Buffalo Bills in Week 5 showed why he should never be counted out as a big-play threat. Through five weeks, Green has run 173 pass patterns, caught 32-of-33 catchable targets, and ranks second among receivers with 504 receiving yards.

Opposite Amari Cooper, Raiders WR Michael Crabtree has been mightily productive so far this season, so much so that he’d probably be atop this list if he’d held on to the two passes he dropped against the Redskins. Through five games, Crabtree has accounted for four of the team’s eight receiving touchdowns and tallied 252 yards from his 90 pass patterns.

After a sluggish start to the year due in large part to uncertainty at the quarterback position, T.Y. Hilton finally looks to be back to his usual self. Through five games, Hilton has run a total of 169 routes and currently ranks third among receivers with 466 receiving yards. As has become expected of Hilton, 169 of those yards have come on deep passes,, the league’s fourth-highest mark. 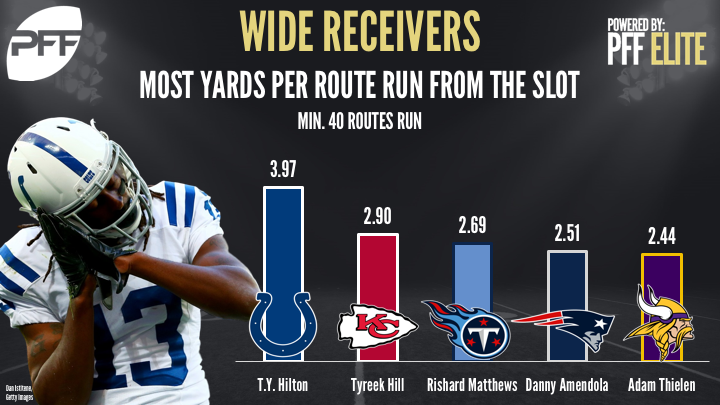 T.Y. Hilton’s overall figures are impressive, but when we take a closer look at Hilton’s numbers when lined up in the slot, it becomes a whole new ball game. One of the league’s premier slot threats, Hilton has amassed 979 yards from the slot since 2016, the most among receivers. This year alone, he has lined up in the slot on 34.9 percent of his snaps and seen 16 targets, hauled in 12 receptions for 234 yards and a touchdown.

As the jack-of-all-trades for the Chiefs offense, Hill has seen snaps all over the field so far this season, but he’s arguably at his most dangerous when lined up in the slot. This year, Hill has run 52 routes from the slot and seen 10 targets for seven receptions, 151 yards and two touchdowns. When targeted out of the slot, he’s generated a ridiculous passer rating of 152.1.

In 2016, Matthews ended the year ranked fifth among 114 qualifying slot receivers with an average of 2.74 yards per route run, so it’s no surprise that he’s among the top players again this year. Through five games, Matthews has run 55 of his 158 total routes from the slot and caught all 10 catchable targets for 148 yards and a score.

With Julian Edelman out for the season with a torn ACL, the Patriots needed someone to step up and emulate his production from the slot. Luckily for New England, Amendola has been that guy so far. Through five games, Amendola has run 86.1 percent of his routes from the slot and accumulated 233 yards, the fifth-most among slot receivers. Since 2016, Amendola has now caught 85.7 percent of the targets thrown his way when lined up in the slot.

One half of arguably one of the most dynamic receiving duos in the NFL, Adam Thielen has got off to a flying start on the inside. 85 of his 138 routes have come from the slot, and he has now caught all 14 of his catchable targets for 233 yards. He has a chance to climb further up the ranking with a strong performance on Monday Night Football.