The Tennessee Titans secured a post-season berth with their 15-10 victory over the Jacksonville Jaguars.

QB Marcus Mariota was 12-of-21 for 134 and a touchdown but had a fumble on a collision with RB Derrick Henry that was returned for a Jaguars touchdown. Henry ran the ball 28 times for 51 yards but his performance was buoyed by a 66-yard screen-pass touchdown.

QB Blake Bortles was 15-of-34 for 158 yards, throwing no touchdowns and two interceptions on the day. RB Leonard Fournette had 69 yards on 19 carries but led the team with 67 receiving yards on four catches.

S Kevin Byard has put together a good season and had a productive day today, catching both of Bortles' interceptions, the second of which sealed the Titans' place in the 2017 post season. With that, we give you our PFF-exclusive takeaways from the contest for each team.

On a rough day overall for the Tennessee offense, Lewan was the one shining star of the group. Lewan was solid run blocking for Derrick Henry, with an 81.3 run-blocking grade, but he was best in pass protection, where he did not allow a pressure in 27 snaps and finished with an 83.4 pass-blocking grade.

Decker was a big part of the Titans offense failing to get much going as he had three drops, two of which that would have gone for big gains. Decker was targeted six times and caught three passes for only 18 yards. Mariota had a passer rating of just 56.3 when targeting Decker. If the Titans are going to make any noise in the playoffs, then they are going to have to get more out of their play-makers on the outside.

Jackson was stingy in coverage, allowing just two catches on six targets into his coverage for a total of 16 yards; his most impressive play on the night was a beautiful strip towards the end of the first half on fellow rookie Keelan Cole that allowed the Titans to tack on three more points before time expired. Jackson has been a bit overshadowed by the play of other rookie cornerbacks this year but he currently sits 29th among all cornerbacks with an 83.6 overall grade, with arguably his best performance of the season helping his team get into the playoffs.

The Jaguars struggled to move the ball on the ground in Week 17 and Williamson may have been the biggest reason why. The Titans linebacker posted an elite 91.2 grade in run defense and his six run stops (a stop is a solo tackle that constitutes as a ‘win' for the defense) are tied for the most among linebackers this week. Williamson has been one of the best linebackers against the run all season, his 90.3 run-defense grade currently ranks sixth among all linebackers.

Bortles was miserable when pressured against the Titans in Week 17. He faced pressure on 12 of 36 dropbacks and did not complete a single pass on ten attempts and threw two interceptions as well. He also struggled to connect on anything past the line of scrimmage, going just 9-of-28 for 98 yards and two interceptions on balls that traveled past the line of scrimmage in the air. This certainly wasn't the tune-up performance the Jaguars were looking for, a similar performance against Buffalo next weekend could be quite costly.

Linder didn't allow a single pressure in Week 17, his eighth completely clean game of the season, however he did have a slightly below-average 68.4 run-blocking grade weighing his overall grade down. The fourth-year pro had a breakout season in 2016, finishing the year with an 86.0 overall grade after being forced to miss much of 2015. Linder hasn't been quite as dominant this season but he still ranks seventh among centers with a 78.9 overall grade for the season.

Gipson was the Jags all around best player on defense against the Titans. Gipson, known for his center-field ability in coverage, was had an extreme impact around the line of scrimmage in run defense. Gipson made five tackles, four of which were stops, and his run-defense grade of 90.0 led the team. Gipson was also solid in coverage, not allowing a catch in 27 snaps in coverage.

Campbell capped off a fantastic first year on the edge for the Jags with another solid performance. Campbell was effective in both run defense and rushing the passer; he made five stops in run defense, which helped earn him a run-defense grade of 83.7. While it was one of his worst games of the year rushing the passer, Campbell still had a positive impact in that arena, finishing with a hurry and a 76.2 pass-rushing grade, which led the team. 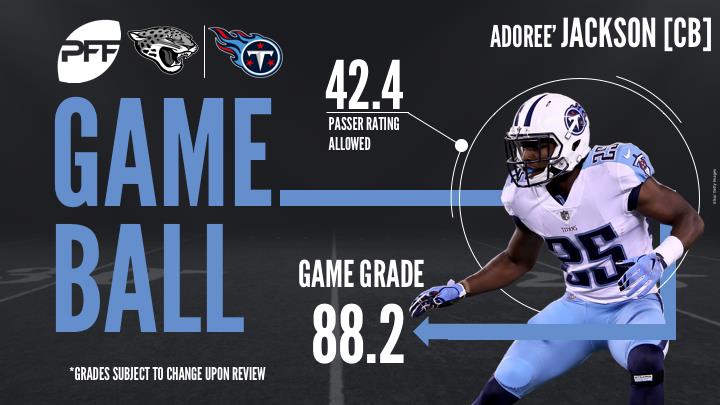