The Cleveland Browns defeated the Baltimore Ravens, 12-9, in Week 5 of NFL action. 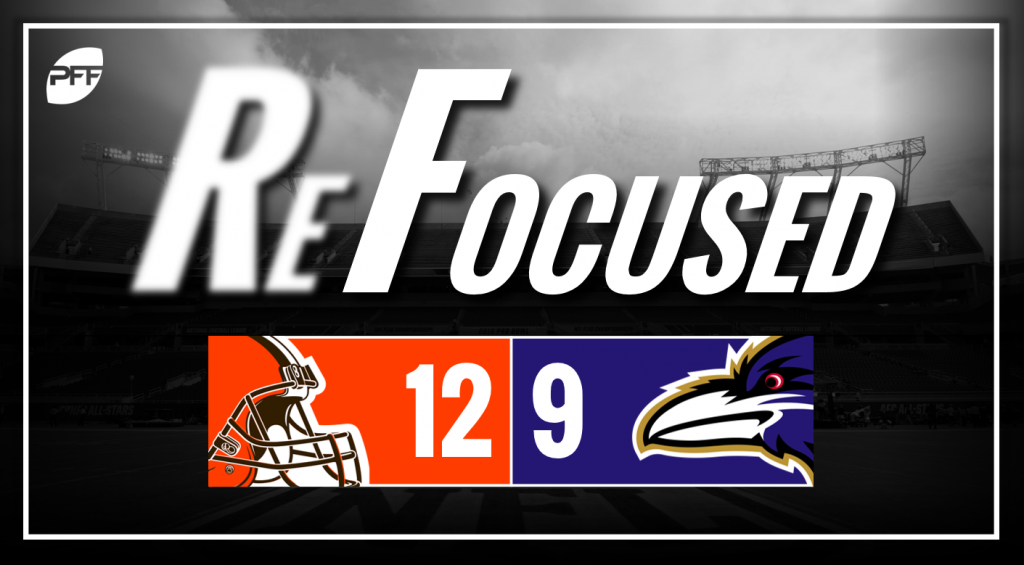 Rookie quarterback Baker Mayfield continued his strong play to start his career, despite another interception that occurred early in the game when there was a miscommunication with receiver Rashard Higgins. Outside of that, Mayfield protected the ball, made timely conversions, and drove the Browns into field goal range multiple times, before the Browns finally won it in overtime.

Much has been made of the improvement of rookie UDFA left tackle Desmond Harrison over the past three games, but he got his first real test against the Ravens Terrell Suggs today. Needless to say, he struggled to block him, as the future Hall of Famer bull-rushed Harrison all game long, which forced Mayfield off his spot for much of the afternoon.

Safety Jabrill Peppers was noticeable on defense, flying around making plays on defense. Peppers was disruptive against the run, blowing up a block on a stretch run to the outside which led to a significant loss on the play. He also forced incompletions downfield and laid a big hit in the end zone on a tipped ball that still had a chance to be caught.

Denzel Ward was a busy man in coverage today. Targeted early and often, Ward made some nice plays on the ball and showed some tight coverage throughout the day. Ward was tasked with covering John Brown quite often and did a nice job of staying with the shifty receiver throughout the game for the most part. It wasn't all perfect, however, as he did miss a couple of tackles after the catch due to poor pursuit angles.

It was a very conservative and inefficient day for the passing game and Joe Flacco. The best throw of the day by Flacco was dropped by receiver Michael Crabtree in the end zone. Crabtree had multiple drops on the day and the offense struggled to move the ball for most of the game.

Center Matt Skura had his struggles and allowed pressure on Flacco multiple times up the middle. Right tackle James Hurst also wore down as the game went on, and got beat quite a bit by Browns edge-rushers.

Safety Anthony Levine Sr. followed up his strong SNF performance vs Pittsburgh with another excellent out against Cleveland. Levine played tight coverage all game long, which resulted in two pass breakups. He's turning into a valuable rotational piece for the Ravens as he played well a year ago on just 263 snaps as he's on pace for a career high in defensive snaps season.

The Ravens pass-rush did all it could to take Mayfield off his game, as they sacked him five times and pressured him over a dozen more times. In the end, it wasn't enough, as the coverage unit for the Ravens failed them at the end allowing a game-winning field goal drive.

Cleveland: Against one of the best defenses in the NFL, it took a total team effort to win and Baker Mayfield did just enough to pull out the overtime victory.

Baltimore: The Ravens defense did their best to try and disrupt Mayfield and the Browns passing attack, but the Ravens offense ultimately struggled to hold up their end of the bargain.