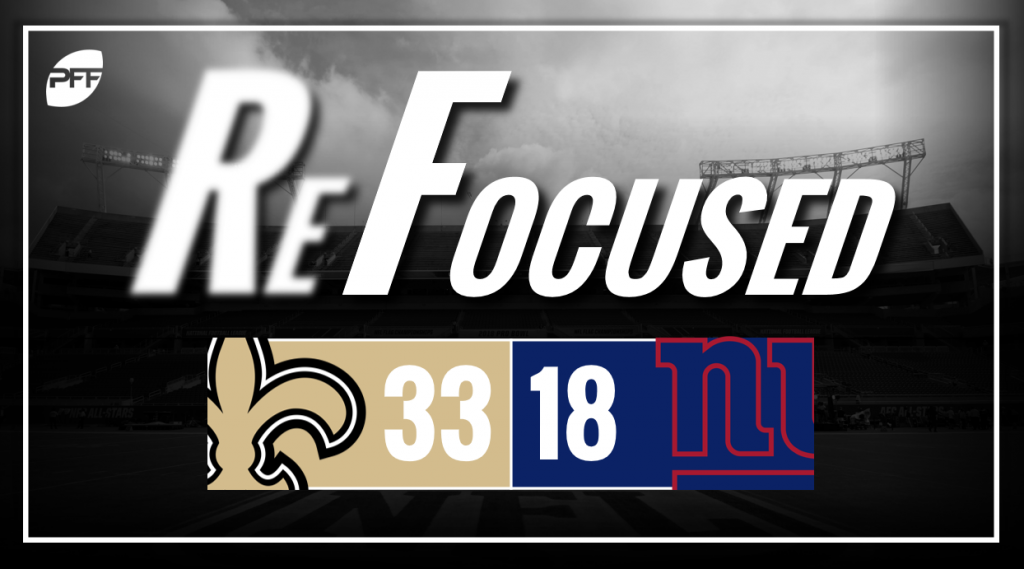 You can only keep Alvin Kamara down for so long. The scary thing is that with over 200 yards from scrimmage and two touchdowns on the day, he still could have been better as he dropped an easy walk in touchdown.

Michael Thomas‘ efficiency remains unbelievable. He caught all four of his targets on the day and has now hauled in 42 of his 44 targets on the season.

Will we ever see the lockdown Marshon Lattimore that we saw last season? He's nearly halfway to his yards allowed total from a season ago already and once again ceded a handful of big plays.

Sheldon Rankins was the only Saints defensive lineman to take advantage of the weak Giants front. He easily had his best game of the season as he continually beat right guard Patrick Omameh.

It was not a banner day for Eli Manning‘s downfield accuracy. He had a number of overthrows in the intermediate range that could have picked up first downs. It didn't help that he was rarely even willing to throw down the field, and he ended the game with an average depth of target of just 6.3 yards.

Facing a defense that has yielded yards at an unbelievable rate through the first few weeks of the season, it looked like a favorable matchup for at least one of the Giants weapons to go off. It never quite materialized though, as Odell Beckham Jr. saw five targets that were 10-plus yards downfield, but only hauled in two of those.

Landon Collins showed up to play Sunday but unfortunately didn't get too much help on the Giants backend. He continually made plays against both run and the pass, and he was a big reason why they kept the Saints offense in check for the first three quarters.

The Giants pass-rush was basically non-existent in this one. The only way it seemed they could get after Drew Brees was by dialing up a blitz. Brees was under pressure on only 8 of his 33 dropbacks.

New Orleans:  The weapons in New Orleans are too deadly to shut down. Alvin Kamara is too dynamic of a player to suppress, and he was fantastic once again.

New York: The Giants' defensive line is going to be an issue all season long. They can hold their own against the run, but it's 2018, and that's only going to get you so far. They need to see what the young draft picks can do with the season all but lost at this point.