The Los Angeles Chargers cruised to a big 30-13 victory over the Washington Redskins in StubHub Stadium.

QB Philip Rivers got most of the fourth quarter off but still finished with 319 yards and two touchdowns on 31 attempts. He was helped out by a strong run game, as the Chargers combined for 174 yards on 35 carries on the day. Both wide receivers Tyrell Williams (132) and Keenan Allen both went over 100 yards on the day.

QB Kirk Cousins and the entire offense had a day to forget. Cousins went 15-of-27 for 151 yards, balancing his lone touchdown with an interception. RB Samaje Perine was held to 45 yards on 17 carries. No Washington receiver had more than 34 yards receiving. With that, we give you our PFF-exclusive takeaways from the contest for each team.

It was another fantastic outing for Rivers, who remains one of the league's hottest quarterbacks. On passes thrown at least 10 yards in the air, Rivers went 11-of-13 for 268 yards, including hitting on all four of his deep (20-plus yard) passes for 180 yards and a touchdown. Rivers leads the NFL in both PFF grade and passer rating (119.2) over the last four weeks.

Allen is the other half of the league's hottest pairing and he caught six of his eight targets for 111 yards. He went up and over CB Quinton Dunbar to make a contested catch in the second quarter and his diving catch on a corner route set up an easy touchdown run early in the third. Allen remains one of the league's most difficult covers in the league and he's currently the No. 4-graded wide receiver in the league at 89.1 overall.

The Chargers defensive line had its way with the Washington offensive line for the most part, with Corey Liuget in particular winning his one-on-one battle with RG Brandon Scherff, beating him decisively at the line on multiple occasions to pressure Cousins. Liuget finished the game with a sack and four hurries from 17 pass-rushing snaps.

There were several Chargers defenders worthy of note in this game, but a player that had several huge plays was Desmond King, who resembled Antoine Winfield for his ability to close quickly on things in front of him and snuff out plays for minimal gains. At one point in the game, King put his helmet on the football to break up a pass, made a run stop on the next play, and then had a sack on the following one to kill all three plays on a Washington three and out, forcing a punt.

The Washington offense was simply overmatched in this game, and the player that seemed to be on the receiving end of every one-on-one loss was Perine. He had some hard yards gained, racking up 35 of his 45 yards on the ground after contact, and making some smart cuts to head to daylight, but the fact that he gained just 45 rushing yards on 17 carries gives you some indication of how little joy there was to be had.

His offensive line wasn't playing well, with RG Brandon Scherff in particular being worked over in pass protection, but Cousins was just a little bit off with a lot of throws in the game that could have made a difference early before the score got out of hand. Cousins had a passer rating of just 56.3 when kept clean in the pocket, passing for just 5.4 yards per attempt.

It was a rough game for Norman, who gave up over 100 yards into his coverage for the first time in his career. He gave up 142 yards on four receptions, including a 75-yard touchdown to WR Tyrell Williams. He was also the culprit on a 51-yarder to WR Keenan Allen, and while he should have received safety help on both plays, Norman simply gave up too much ground down the field in this one and the Chargers made him pay.

Kerrigan's strong outing went overlooked in the blowout loss, but he did manage to pressure the quarterback on six of his 27 rushes (one hit, five hurries), not including another pressure that led to an offensive holding call. He did damage from both sides of the line, beating LT Russell Okung and RT Joe Barksdale, with Okung picking up the hold late in the third quarter. Kerrigan has now notched four or more pressures in eight of 13 games this season. 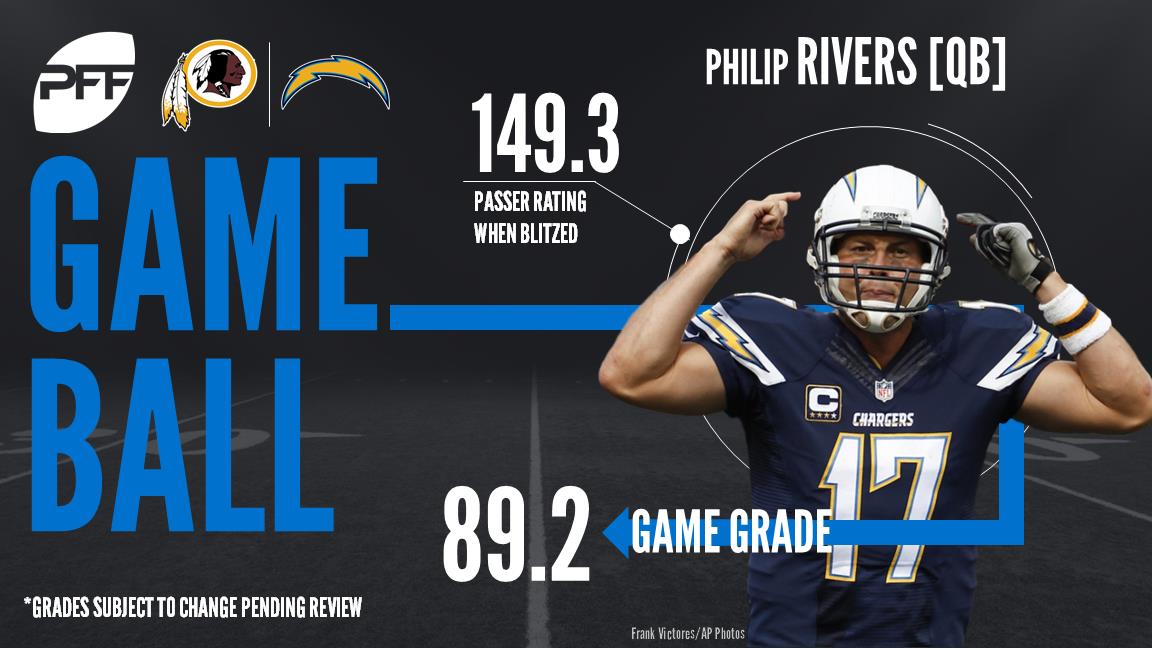