The Los Angeles Rams defeated the Oakland Raiders on Saturday afternoon, 19-15 continuing the second full week of preseason action in the NFL. 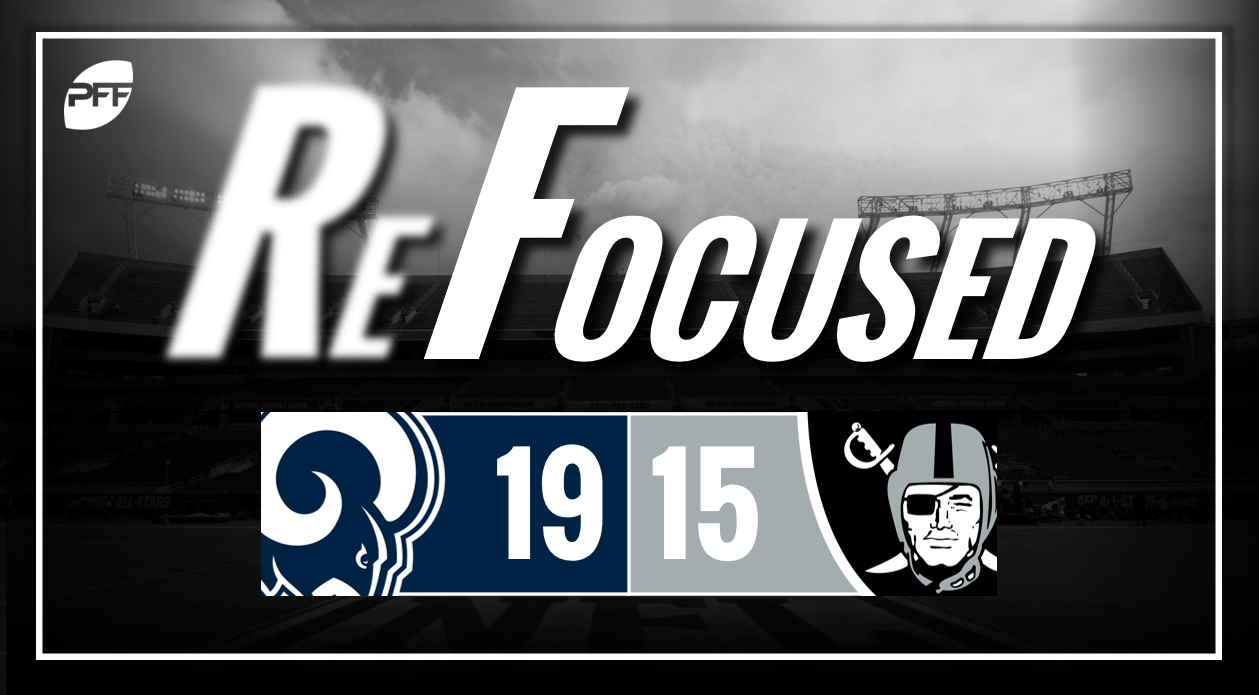 Jon Feliciano didn't bring his A-game to this one, as he struggled to establish himself in the pass game and failed to create much of a push in the run game as well. Much of the Raiders offensive line gave up quick pressures during the game, making it tough for both Connor Cook and E.J. Manuel to get into any sort of rhythm.

While he did lose a fumble, Manuel played decent considering the amount of time he had in the pocket. His best throw may have been a would-be connection on a pretty ‘go' route with Marcus Baugh, but unfortunately, the former Ohio State Buckeye couldn't reel it in.

Fifth-round draft pick Maurice Hurst was easy to notice in this game, and his speed on the defensive interior is already causing problems for offensive linemen. He finished the game having made an impact against the run and adding a sack as a pass-rusher, but did get caught upfield on two occasions as well.

Edge defender Shilique Calhoun had an eventful game, both good and bad. On one hand, he was a force against the run and the pass, generating pressure and blowing up runs in the backfield. On the other, he was charged with two big penalties. One of those could have gone either way, but his facemask penalty late in the fourth quarter allowed the Rams to kneel out the clock. It might only be preseason, but that's still a game-ending poor decision.

Running back John Kelly was praised for his performance in the loss to the Baltimore Ravens last week, but this game wasn't quite as impressive. Averaging just 3.1 yards per carry, and two yards per reception, there was a lot of dancing around and not really getting anywhere for the former Tennessee running back. At times, he would have been better just taking what was available to him as opposed to looking for more. Disaster almost struck for him as he fumbled going into the end zone, but he was able to recover it to preserve the touchdown.

Two plays really changed the perspective for how this performance from quarterback Brandon Allen is viewed. The first was the fourth-quarter interception where he completely missed linebacker James Cowser in coverage, throwing the ball straight to him and setting the Raiders up just outside the red zone. The second was a missed opportunity on the Rams second-to-last drive, where he overthrew Steven Mitchell after he had gotten wide open in the end zone, forcing them to settle for a field goal.

Nate Holley was a ballhawk in this one, jumping routes and defending a few passes. The Rams coverage unit as a whole was quite solid throughout the game. Of course, things are always easier with a consistent pass-rush, but several members of the defense made some nifty plays on the ball.

The Rams pass-rush was dominant throughout the majority of the game, with Samson Ebukam putting on quite the display against the Raiders offensive line. He got home on multiple occasions using both power and finesse moves. He was not the sole contributor though, as the entire Rams' front took turns making life very difficult for Raiders quarterbacks.

Oakland: The Rams pass rush was dangerous and consistent, taking advantage of some weak depth along the Raiders' offensive line. Ultimately, that's where the biggest difference in this one was.

Los Angeles: The Rams didn't get punished for their early mistakes, with Kelly recovering his own fumble in the end zone and a potential Mannion interception being caught out of bounds. Had those two plays gone differently, the end result might have been flipped.