The New York Giants are just a few days away from the start of training camp. Despite having big expectations for the 2017 season, the Giants finished with a 3-13 record – the second-worst record in the NFL. Under new general manager David Gettleman and new head coach Pat Shurmur, New York will have a different look to them in 2018 and will be looking to get back to the playoffs for the second time in three seasons.

Who else would be the top storyline in New York? When healthy, Beckham Jr. is one of, if not the most electrifying wide receiver in the NFL. After a fractured ankle in Week 4 ended his season, it was evident just how valuable Beckham was to the Giants, as the offense collapsed in his absence. From 2014-2016, Beckham has ranked third, third and fifth, respectively, in yards per route run per season. In 2016, Beckham led all wide receivers with 29 forced missed tackles – 20 more than the next closest player.

With an improved offensive line, and the addition of dual-threat running back Saquon Barkley, if Beckham stays healthy, the Giants offense has a chance to be mount a sizeable gain in offensive production from 2017 to this year.

Behind Beckham, Sterling Shepard is locked into the No. 2 receiver spot. Even with Beckham lost for the season, Shepard ran 84 percent of his routes from the slot in 2017 (fifth-highest rate in the NFL) and finished fifth in the league with 639 receiving yards when lined up inside. As a rookie in 2016, Shepard led all NFL receivers in touchdowns from the slot (eight).

Behind Beckham and Shepard, the Giants will have an interesting battle for the third and fourth receiver spots on the roster. It seems as though Cody Latimer may have a step up on the rest of the competition, as he took first-team reps in Beckham’s absence during 7-on-7 and 11-on-11 drills in team minicamp.

In addition to Latimer, Roger Lewis and Hunter Sharp will also compete for the third wide receiver job. Last year, Lewis stepped up with Beckham out for the year and Shepard missing some time as well. Lewis not only finished as the third-most targeted player on the team behind Shephard and tight end Evan Engram, he tied Shepard for the team lead in deep targets (nice) and led the team in yards on deep passes (109).

Engram will enter his sophomore campaign as the Giants starting tight end. With Beckham sidelined last season, Engram emerged as a top target for Manning in the passing game, catching 6-of-8 red-zone targets for five touchdowns. No other Giant caught more than two red-zone touchdowns last season. With a healthy Beckham and Shephard, and an improved offensive line and running attack, Engram is set to cause headaches for opposing defenses once again in 2018.

If the return of Beckham Jr. isn’t the biggest storyline in New York, undoubtedly, the addition of No. 2 overall pick, running back Saquon Barkley is. But before we get to the Giants’ shiny new toy, we need to address the improvements New York has made to the offensive line.

One of the most heavily-criticized units in the entire league, the Giants offensive line once again did not perform well in 2017. Poor play and injuries (nine lineman played at least 250 snaps in last year) hurt the team as they allowed 27 sacks (fourth-most in the league) and finished the season ranked 26th in our offensive line rankings.

After making Nate Solder the highest-paid tackle in football and drafting Will Hernandez in the second round, the left side of the line seems to be solidified: left tackle Solder, left guard Will Hernandez and center Brett Jones seemed poised to start the year on the left side for the Giants although Jon Halapio is making a strong case to be the team's starter at center. The addition of Solder alone was huge for New York, as he checked in as the top available OT in our Free Agency Guide. In 2017, Solder led all offensive tackles with a 93.2 percent run-blocking success rate. 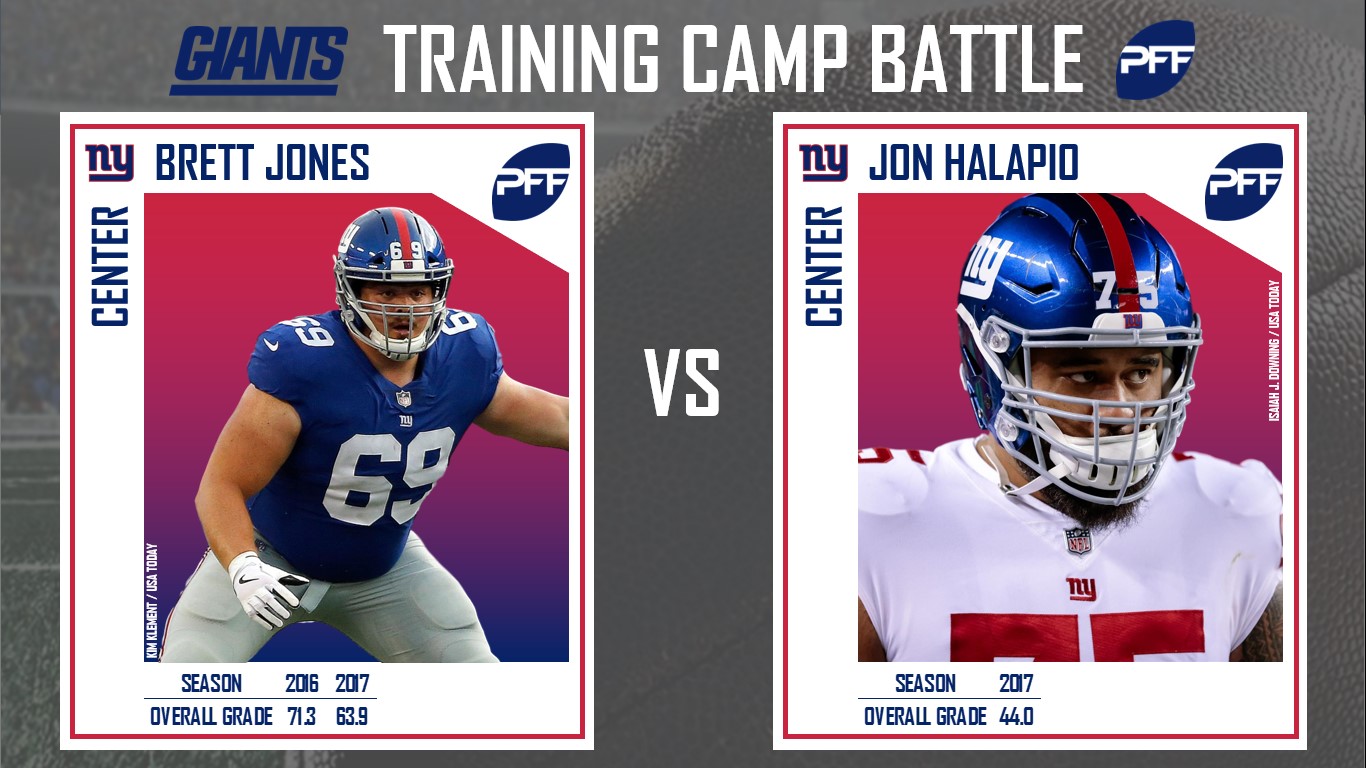 Hernandez, the rookie from UTEP, will be out to prove he’s no slouch either. If his 2017 college numbers are any indication – 94.1 overall grade, third in the nation among guards and 99.6 pass-block efficiency rate, first in the nation at the position – the Giants offensive line could end up ranking much higher next year.

On the right side, John Jerry and John Greco will likely compete for the right guard position, and Ereck Flowers and Nick Becton will compete at right tackle. Even amid the disaster the unit endured as a whole last season, Flowers showed a small improvement and put together the best season of his career. Although, admittedly, expectations for him weren’t exactly high, his performance on the year earned him the 54th-highest grade among offensive tackles.

Seeing as how starting offensive tackles for the Giants have allowed at least 35 pressures in each of the last three seasons, the Giants are hoping their new additions, and the seemingly improving Flowers, can finally prove the critics wrong in 2018.

Getting back to Barkley, it’s no secret that the Giants running game has been a mess over the past couple seasons. As a team, they averaged 3.9 yards per carry last year and 3.5 yards per carry two seasons ago. Barkley was the most gifted back available in the 2018 draft class – hence the Giants spending the second-overall pick on him – and is a threat to take it to the house on any given play (56.6 breakaway percentage in 2017, third in the nation) even if he fought for extra yardage all too often last season.

While the Giants are likely to utilize Barkley as a 20-carry per-game bell cow, they'd be wise to make it a focus to implement him in space and in the passing attack as well. Last year, Barkley finished first in the draft class by averaging 1.90 yards per route run (minimum 165 routes run) and tied for second in the class by forcing 14 missed tackles on receptions. Giants running backs forced just 13 missed tackles on receptions combined last season.

State of the defense

The Giants came in at 29th in our team pass-rush rankings for 2018 and 31st in pressure percentage as a team at a rate of 29.0 percent. On paper, the Giants have a solid defensive line. On the interior, Damon Harrison and Dalvin Tomlinson are stud run defenders, and although Harrison contributed 18 total pressures in 2017, neither should be expected to offer much as pass-rushers in 2018. Robert Thomas, Josh Mauro and rookie B.J. Hill will all compete for playing time on the defensive line as well.

On the edge, Olivier Vernon has yet to reach the heights of his 2015 season, but still has been productive over the last two yaers for the Giants. Last season, he registered nine sacks, five hits and 24 hurries on 378 pass-rushing snaps. On the other edge, newly-acquired Kareem Martin (75.2 grade in 2017) will be pushing for playing time opposite Vernon despite producing just 35 total pressures during his four-year career so far. He seemingly has the edge (no pun intended) over rookie Lorenzo Carter for the time being, but that could be because of his familiarity with defensive coordinator James Bettcher’s defense, having played in it from 2015-2017. It will be interesting to see if Carter can unseat the veteran Martin for a starting role.

The Giants will certainly hope to up their team-pressure percentages in 2018 – as the benefactors of that will be the middle linebackers and the secondary. Alec Ogletree and B.J. Goodson will more than likely be starting in the middle of the defense. Ogletree produced a  pass-rush productivity at a mark of 17.4, and despite being limited to only seven games due to injuries, Goodson ranked third in the league among inside linebackers in combined tackling efficiency at a mark of 26.0. Behind Ogletree and Goodson, Calvin Munson and Ray-Ray Armstrong are among those who will compete for a spot on the roster at the linebacker position.

At cornerback, Janoris Jenkins is the only sure-fire starter. Third-year player Eli Apple is no doubt the favorite to be the other outside corner, but it’s hard to say given his play (73.6 grade, 72nd among corners) and his antics off the field last season. Other corners that will compete for spots include rookie and supplemental draft selection Sam Beal, Teddy Williams, Grant Haley and William Gay.

At safety, the Giants employ one of the best in the business in Landon Collins. Since 2016, Collins leads all safeties in defensive stops (83), and after a 2017 season which saw him grade as our sixth-overall safety (88.5 grade), Collins finished as the 18th-best player in our PFF 50. 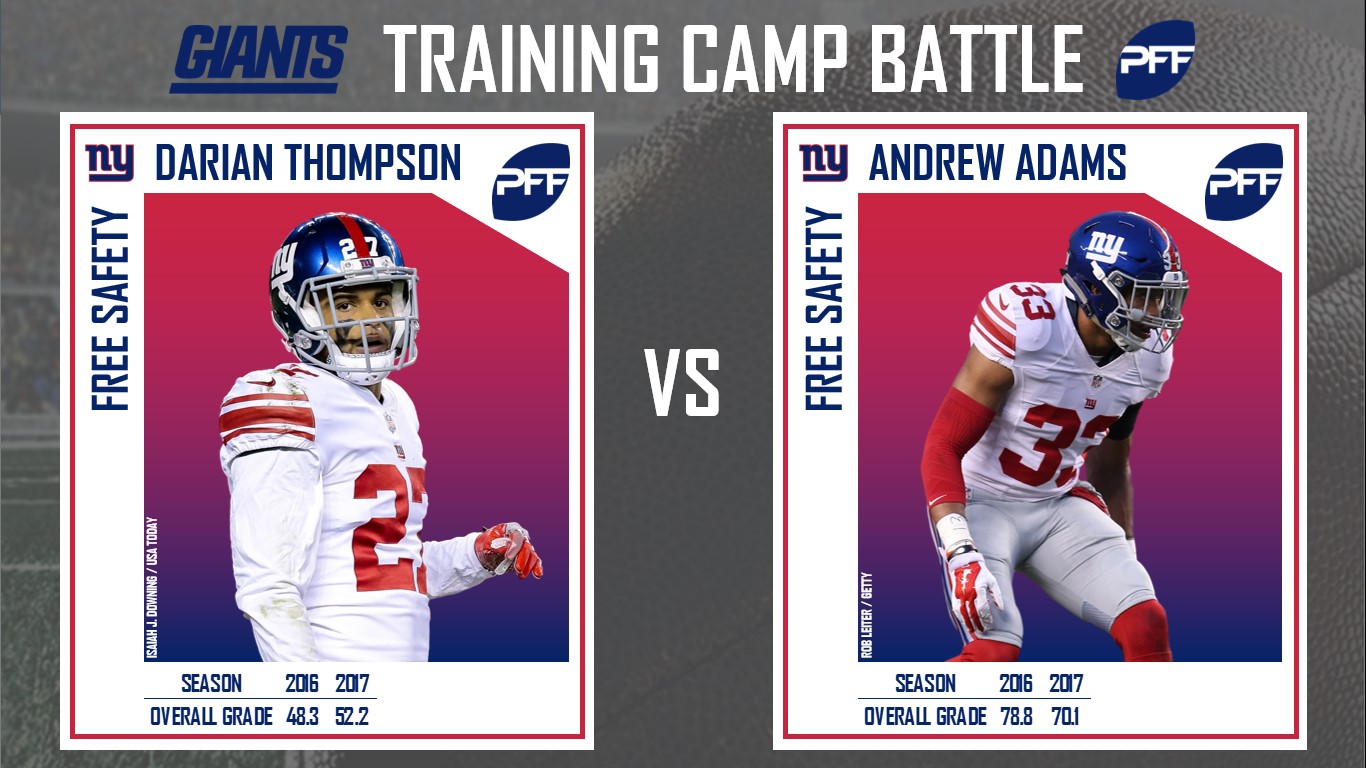 The other safety spot is currently a bit of a mystery. After starting all 16 games last season and finishing third on the team in tackles, it would seem that Darian Thompson is the favorite to win the job. However, in limited snaps (276), Andrew Adams actually graded out better (70.1 grade) than Thompson (53.8 grade). Both players have seen playing time for the Giants – now the question is, who will impress more in training camp and in preseason?