Ronald Jones has bulked up from 208 to 221 pounds after a down season in 2018. The Tampa Bay Buccaneers’ offense overall should be better with Bruce Arians now pulling the strings. Veteran guard pick Ali Marpet is looking like the real deal and already signed to a long-term contract.

There are plenty of reasons to have optimism for the Bucs’ rushing attack in 2019. Heck, if the offseason were any longer, we could see Jones or even Peyton Barber hyped up as breakout candidates. Unfortunately for Tampa Bay, no amount of weight gain or Arians magic will elevate the team’s ground game to a level worth significant optimism. 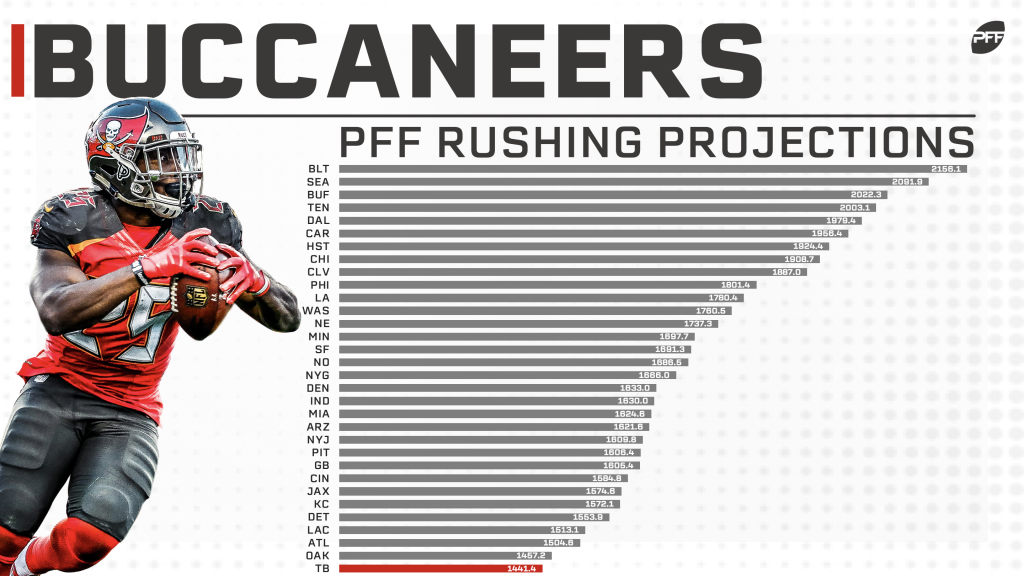 According to PFF’s fantasy projections, which are made possible by the works of Eric Eager and Jeff Ratcliffe, Tampa Bay’s projected rushing total for the 2018 regular season (1,441.4) ranks dead last among all 32 NFL teams. And the team’s current projected yards per carry average (3.65) also ranks 32nd.

Jones, who is expected to share a lead role in the team’s rushing attack with Barber, turned in a career year at USC before entering the NFL. He rushed for 1,550 yards, 63 first downs and 19 touchdowns en route to an elite 93.8 rushing grade in 2017. He also forced a whopping 58 missed tackles and averaged 3.50 yards after contact per attempt in his last year with the Trojans.

However, none of that success carried over to his rookie campaign in Tampa. Jones earned a dismal 48.8 overall grade and a 52.4 rushing grade across 90 offensive snaps this past season.

And Barber, though significantly more productive than Jones in 2018, is nothing to write home about. The 5-foot-11, 225-pound back earned a 67.1 overall grade and 70.2 rushing grade in what was a career year for the former Auburn product this past season, rushing for 871 yards, 36 first downs and five touchdowns across 234 carries (3.7 YPC) in the process. He finished the year ranked 21st in PFF’s elusive rating metric (47.5) and T-34th in yards after contact per attempt (2.68) among qualifying backs.

Barber is currently projected to lead the team in rushing with 557 yards and 2.9 touchdowns across 149.4 carries. Jones’ projected stat line is 109.3 carries, 398.6 rushing yards and 2.5 rushing touchdowns.

Of course, all of the blame for Tampa Bay’s projected rushing woes can’t be placed on Jones and Barber. We at PFF know as well as anybody that rushing production is largely dependent on the blocking ahead, and the Buccaneers’ offensive line isn’t one that should thrive in the run game.

Only Marpet – the NFL’s ninth-ranked run-blocking guard in 2018 – performed at even an average level as a run blocker for the Bucs a year ago; the rest of the team’s projected front-five have underwhelmed in that regard.

Running behind Smith, Jensen & Co., Buccaneers running backs averaged just 1.00 yards before first contact per carry in 2018, a mark that ranked 30th among all NFL backfields. The league average was 1.48.

It’ll be tough sledding for Tampa Bay on the ground in 2019, and the sleds (Barber and Jones) aren’t in great shape, either.