The Tampa Bay Buccaneers are set to enter the 2019 NFL season with their fair share of offensive talent, the kind of talent that has quite rightly caught the spotlight over recent months. After all, the combination of Jameis Winston and newly appointed head coach Bruce Arians has the potential to make for one of the more entertaining passing attacks in the league, while the coalition of Mike Evans, O.J. Howard and Chris Godwin figure to complement that passing attack and make their mark as one of the best pass-catching trios in the NFL.

However, in the shadows of that spotlight stands a player who has quietly been outstanding for the Bucs throughout the last four up-and-down seasons. That player is offensive lineman Ali Marpet, and he deserves to be recognized as one of the league's most underrated players. 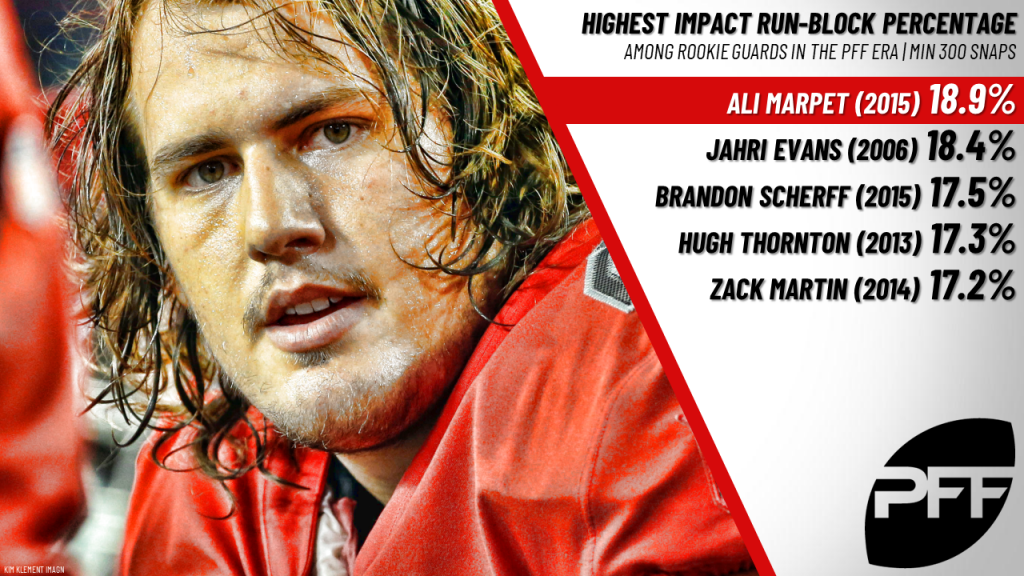 Marpet repaid the faith that was shown in him by hitting the ground running in his rookie season. After becoming the day one starter at the right guard position, he went on to play 822 of his team's 1,091 offensive snaps in his rookie year, and he earned an overall grade of 77.2 for his efforts. That grade not only ranked 31st among 84 qualifying players at the position that year, but it's a mark that still stands as the tenth-highest ever recorded by a rookie offensive guard who played at least 500 offensive snaps in their rookie season — that list spans 72 players from 2006-2018, and Marpet's grade betters the likes Quenton Nelson (76.7, 2018), Kevin Zeitler (75.4, 2012), Ben Grubbs (69.0, 2007) and Shaq Mason (66.5, 2015).

The Tampa Bay guard owed that promising first-year grade to a solid performance in both facets of the game. He showed promise in pass protection by allowing just two sacks, three hits and 17 hurries from his 447 pass-blocking snaps throughout the season, and his resulting 4.9% pressure rate still ranks tied for 23rd among the 71 rookie guards who logged at least 300 pass-blocking snaps in their rookie seasons.

As adequate as he was in pass protection though, Marpet was on another level when it came to run blocking. In 13 games, the Hobart standout recorded an impact run-block percentage of 18.9% and a run-blocking grade of 81.4 which both ranked 18th among the 88 offensive guards who played at least 300 run-blocking snaps in 2015, while the latter mark still stands as the best impact run-block percentage ever recorded by a first-year player at the position.

Not bad for a small-school guy in his first year in the NFL.