In our recent ranking of every secondary in the NFL, we named the Baltimore Ravens as the best in the league, and while they’ll face fierce competition to prove that they are the best not just on paper, but on the field too, they have more than enough talent to do just that. So what makes the Ravens the NFL’s best secondary in the NFL heading into the 2019 season?

If the Cleveland Browns trade to acquire Odell Beckham Jr. was the top move of the offseason, Baltimore’s signing of free safety Earl Thomas III in free agency was 1b. Thomas will go down in history as one of the best cover safeties of all time. He has the range, instincts and reactions that very few to ever play the position have, and he gives the Ravens a truly dominant center fielder for the first time since soon-to-be Hall of Famer Ed Reed stalked opposing quarterbacks from the defensive backfield in the Charm City. 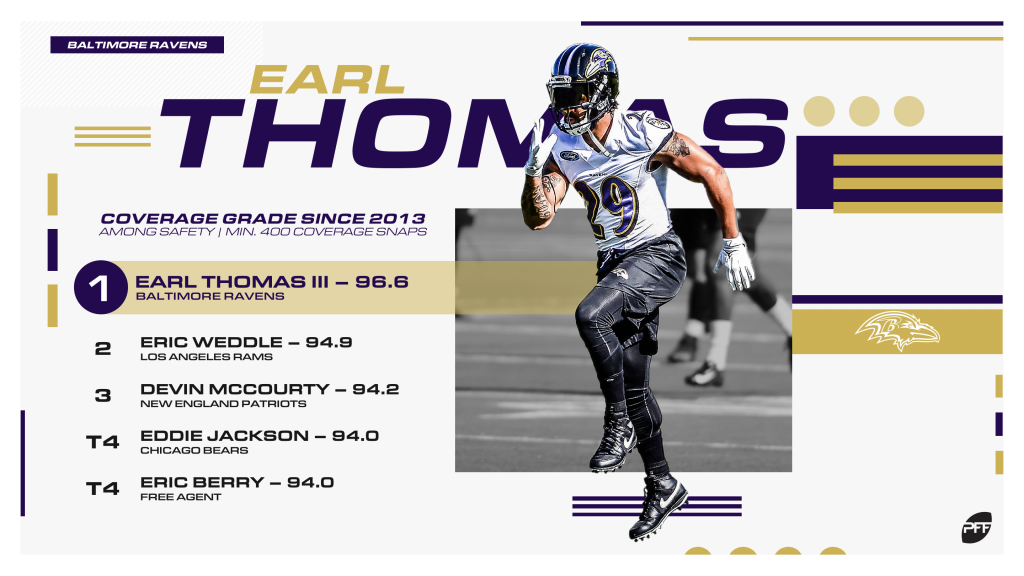 While the addition of Thomas is the big story for the Ravens this offseason, cornerback Marlon Humphrey’s development has been just as important to the strength of this unit. Earlier this month I wrote about how Humphrey has been one of the NFL’s top outside cornerbacks over the past two seasons, posting the fifth-highest PFF coverage grade among players lined up at the position in that span. 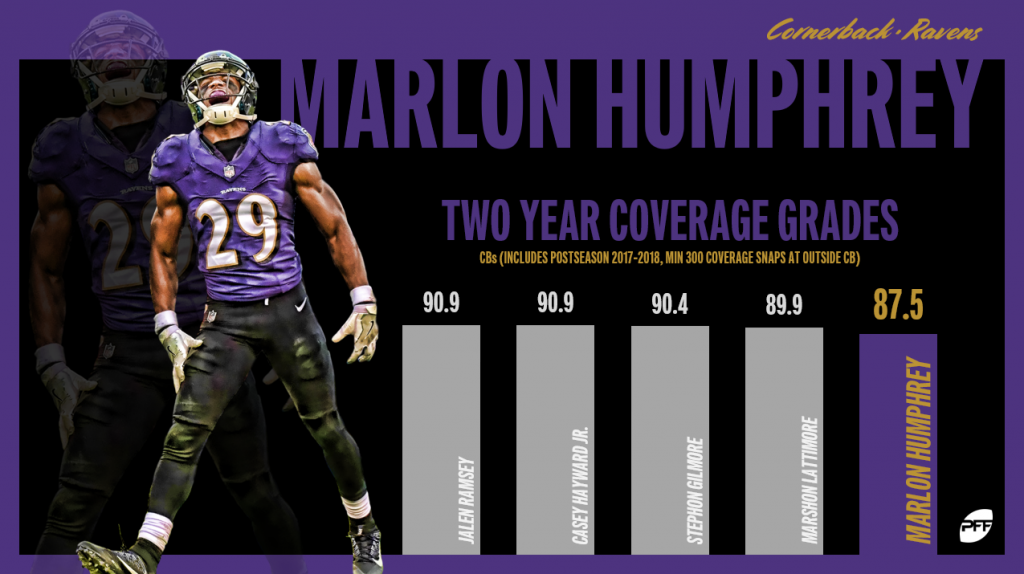 Where Humphrey is really showing his worth is in his ability to break passes up. During the 2018 season, he forced an incompletion on 24% of the throws into his coverage, ranking second in the NFL behind New England’s Stephon Gilmore among cornerbacks who saw at least 50 targets last year. Through two seasons in the NFL, he has forced 19 pass breakups and was tied for eighth among cornerbacks with 11 in his second season in the league.

It’s not just about Humphrey and Thomas though, and while the Ravens will be confident with them in the lineup, the prowess of the rest of the starting unit and the depth behind them is what sets them up well for 2019. Tony Jefferson mans the other safety spot, and with Thomas in town, he will likely spend more time closer to the line of scrimmage where he can really excel. A former undrafted free agent, he has produced PFF grades of 70.0 or higher in each of the past three seasons.

Jimmy Smith will likely start opposite Humphrey on the outside and, while his career has had its ups and downs, he has shown the ability to impress, producing three seasons with a PFF grade of 77.0 or higher throughout his career while forcing 40 pass breakups and pulling in 14 interceptions since 2011. Brandon Carr is another outside cornerback who will see a lot of time, and may even continue to start, coming off a season where he didn’t allow a touchdown on 83 throws into his coverage while coming away with a pair of interceptions to go along with nine pass breakups.

In the slot, the side recently paid Tavon Young to stick around long term. The former fourth-round draft pick out of Temple had his ups and downs on return from injury in 2018 but was impressive as a rookie in 2016, where he produced a PFF coverage grade of 75.6 on 560 snaps in pass defense. Former Alabama standout Anthony Averett played sparingly as a rookie, but looked solid when he did, finishing the year with just two receptions allowed from 47 snaps in coverage. Safety Anthony Levine has seen at least 180 coverage snaps in each of the past two seasons, producing PFF coverage grades of 74.0 or higher in both. He fits the mold as an extreme version of Jefferson and has seen a lot of work in the box as essentially a dime linebacker in recent years.

With high-end talent at the top and strength throughout the lineup, it’s easy to see why we have such high expectations for the Ravens defensive backfield in 2019. Much of the focus has been on their offense but while the Ravens are a team that looks set up to try and win on the ground — very much going against the grain in today’s NFL — adding Thomas proves that they understand that their defense needs to be set up to stop the pass.