As the NFL regular season is a mere weeks away, we at the PFF Forecast have been previewing 2018 outlooks for each of the NFL’s divisions as a part of our weekly podcast, after spending the majority of the offseason reviewing teams’ 2017 season from the analytical perspective.

The AFC South was once considered one of the weaker divisions in the NFL, but after a surge by the Jacksonville Jaguars and some late-game wild-card round magic from the Tennessee Titans, it became a division that produced three playoff victories and was a half away from representing the AFC in the Super Bowl. The Jaguars and the Titans’ postseason success, along with the prospects Deshaun Watson and Andrew Luck returning to health, means that the AFC South will be a compelling division to watch in 2018.

Our projections make use of our PFF ELO rating system, which is an iterative, backward-looking algorithm that leverages PFF grades to yield a schedule-adjusted power ranking that can predict roughly three-fourths of the variance in the Vegas spread on a weekly basis. Added to PFF ELO are variables that take into account time zone, rest, opponent-adjusted quarterback grades, and coaching metrics, among others.

Below are our full projections, as well as some other interesting discussion points for the (other) dirty south. These projections are updated from Episode 29 of the PFF Forecast. We’re lower on the Jaguars and Texans than the markets are, while our grade data on Luck has us high on the Colts, should he return to health for the start of the season. Odds are in parentheses and are sourced from BetOnline. 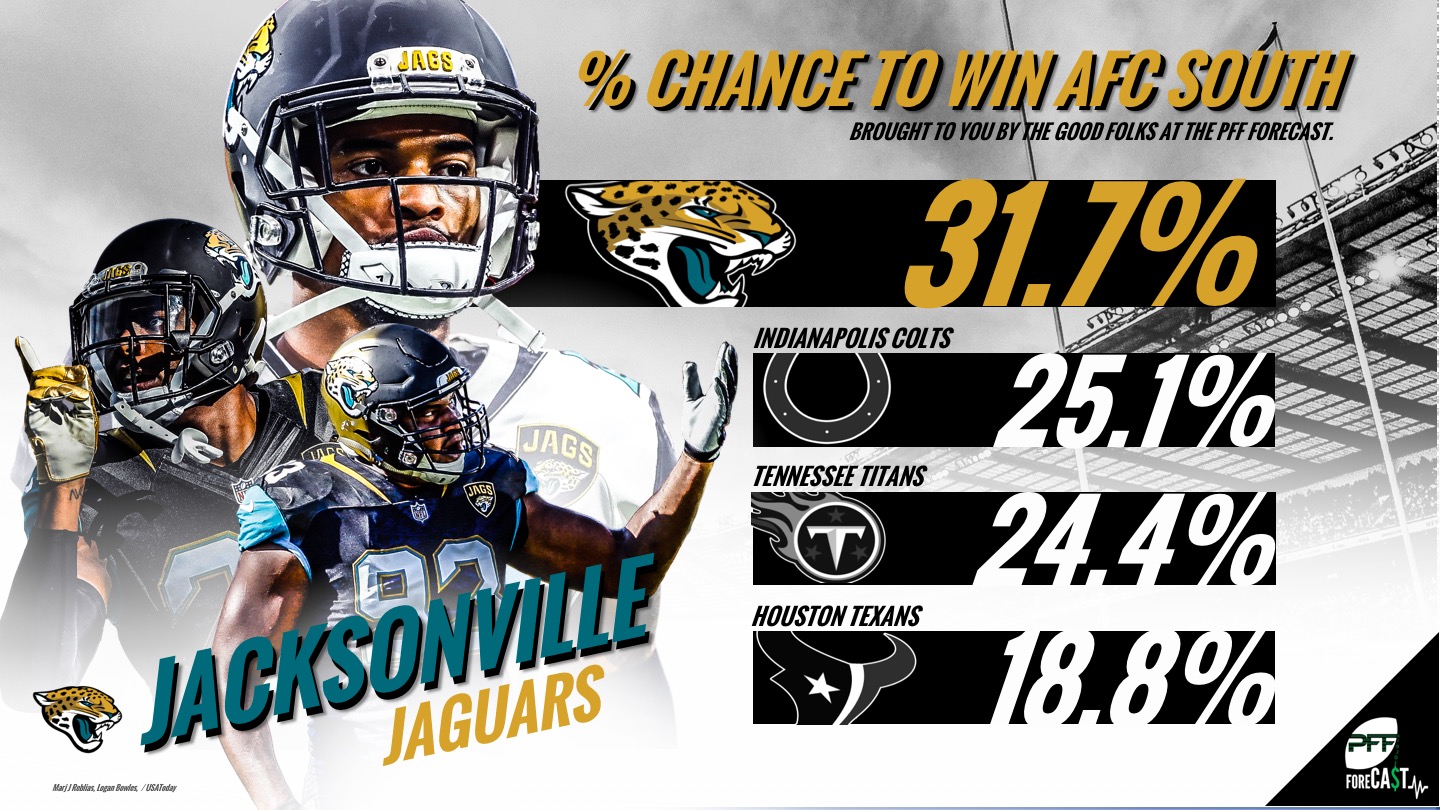 With almost a one-in-three chance, we have the Jaguars repeating as division champions for the first time since the turn of the century (when they played in the AFC Central). Indianapolis is buoyed by the return of a quarterback who, when kept clean in 2016, generated the fifth-best passer rating in the NFL (112.0) and earned the second-highest grade behind only Tom Brady, while Tennessee is hoping that a reversion from “exotic smashmouth” allows the skills of Marcus Mariota to shine in his fourth year. Houston’s hoping that the return of Watson and J.J. Watt build on the promise of the young quarterback’s first six starts. We’re a little less optimistic on each front, especially when considering the question marks in the secondary (ranked 25th in our preseason unit rankings).