Passing the football and scoring points through the air is a common theme among the best teams in the NFL these days. But passing the ball isn’t that simple, and in order to pass well, you usually have to block well. Just ask the Super Bowl participants over the last two seasons, who all were great at fending off pressure and all finished their respective seasons in the top 10 in pass-blocking grade.

In order to create pressure against the great pass-blocking teams, you either need to have great pass-rushers or be able to scheme pressure (or both). One way that teams scheme pressure is by using stunts, which can be very effective in creating pressure, especially against offensive lines that aren’t prepared for it or don’t communicate well. On the other hand, well-disciplined offensive lines that have great pass-blockers can thwart off even the trickiest of stunts. 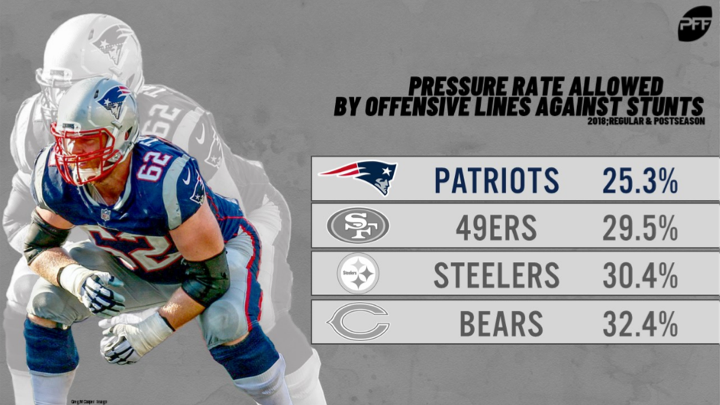 One of the things that make that offensive line so great is that they can handle stunts better than anyone else — and it’s not even close. This past season, the Patriots allowed pressure on only 25.3% of stunts, which was by far the best mark in the league. The second-place team was the San Francisco 49ers, who allowed pressure on 29.5% of their stunts. The worst team protecting against stunts was the Dolphins, who surrendered pressure on such plays at a whopping rate of 59.7%, while the NFL average was 41.1%.

As we showed in an article earlier this year, the Patriots' offensive line stepped it up a notch when the playoffs came, and part of that postseason improvement was because they were doing even better against stunts. New England saw 20 stunts against them this past postseason, but they allowed a measly three total pressures on such plays; that equals a pressure percentage of just 15% which was by far the best mark among the 12 playoff teams. Two of the Patriots’ biggest challengers, the Chargers and Chiefs, both allowed a pressure rate of 50% against stunts in the postseason.

From the 2015 season to present, only one other team has allowed pressure on stunts below 30% of the time – the New Orleans Saints back in 2016 (28.7%). Going forward, it will be shocking to see a team protect better against stunts than the Patriots did this past season, but if any team does pull it off, it’s most likely to be the Patriots themselves.

The fact that the Patriots rank among the top in pass-blocking performance year in and year out is a testament to their coaches, specifically offensive line guru Dante Scarnecchia, who revived New England’s pass-blocking when he returned to the team as the offensive line coach in 2016 after a three-year break.

In 2014 and 2015, with Dave DeGuglielmo as the offensive line coach, the Patriots ranked 30th and 31st in pass-blocking grade, respectively, which led to him leaving the team after the 2015 season. The Patriots then brought back Scarnecchia and the move paid off immediately, as the Patriots finished 2016 with the 11th-best pass-blocking grade, jumping up 20 spots from the previous season and going on to win the Super Bowl against the Falcons, and then going to two more Super Bowls and winning one against the Rams. And make no mistake, one part of Scarnecchia’s massive success in New England is being able to thwart defensive stunts so efficiently.

The Patriots are so well-coached on both sides of the trenches, and as we showed in an earlier article, they are also one of the best stunting teams on defense. As we head into the 2019 season, Tom Brady, Bill Belichick and Dante Scarnecchia may not be getting any younger, but the more time they spend in the game, the better they seem to get, so it wouldn’t be surprising to see them march to another Lombardi trophy next February, one stunt at a time.