After Week 17 came to an end, the New England Patriots offensive line found themselves at fourth in our PFF rankings that ranked the units across the NFL. They don’t have any household names, perennial Pro Bowlers, or a single Pro Bowl appearance between them for that matter – though starting guard Shaq Mason did finish as PFF’s All-Pro right guard and was deserving of a Pro Bowl nod. They do have consistency across the front, though, with no real weak spots. All five starters were among the top-75 graded offensive linemen in the league regardless of position. 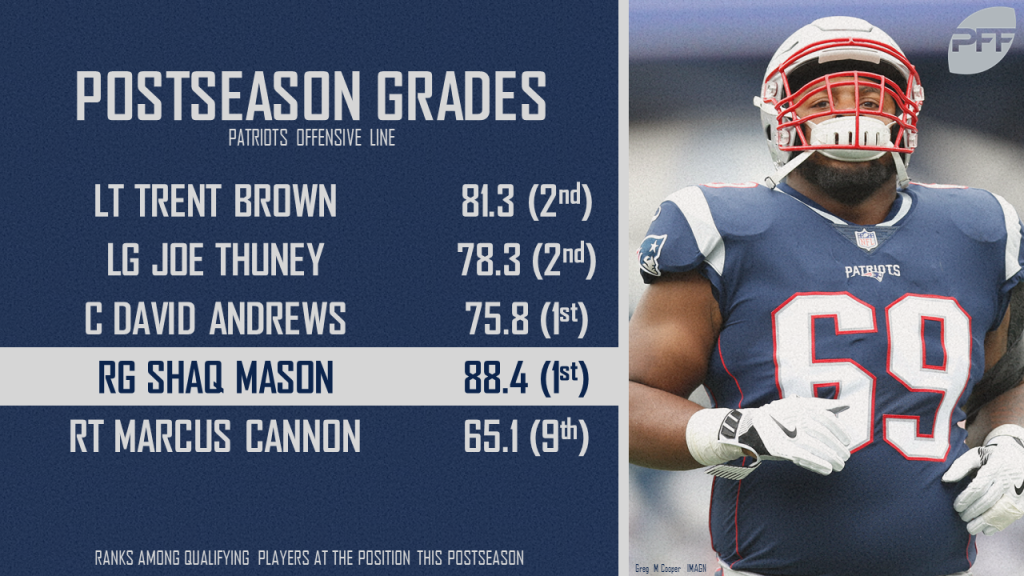 With the calendar turning to January, that top-five offensive line has gotten even better. Across the Patriots' two playoff games, they have been as large a reason as any that they are preparing for another Super Bowl this week. Four of their five starters on the offensive line have graded at 75.0 or above this postseason – a mark that only 27 offensive linemen in total hit during the regular season. The group is headed by an impressive 88.4 overall grade from Mason and is filled out by Trent Brown (81.3), Joe Thuney (78.3), and David Andrews (75.8). Marcus Cannon is the lone starter below that threshold with a 65.1 overall grade across the two playoff games.

Tom Brady has certainly taken advantage of the clean pocket that those five have provided him in their two playoff victories. Brady has been pressured on just 15.6% of his dropbacks in the playoffs; to put that into perspective, the lowest pressured rate in the regular season among quarterbacks was Ben Roethlisberger at 24.1%. The Patriots offensive line is keeping him clean at an absurdly high rate.

Clearly, a lot of that has to do with Brady’s blistering 2.18 second time to throw. That makes life a whole lot easier on the offensive line in pass protection, but they’ve also responded when asked to hold their blocks for longer. On the 24 plays in which Brady has had a time to throw of 2.6 seconds or longer this postseason, he has been pressured on just eight of those plays. The NFL average pressure rate allowed for the postseason in that time frame is 46 percent. That goes to show that the offensive line is playing a role in the lack of pressure to go along with Brady’s quick draw.

Their impact on the run game has been just as apparent. The Patriots are averaging 1.8 yards before contact per running back handoff, ranking third-best among all playoff teams. Opening up lanes for the running backs is nothing new for their line though; the Patriots ranked fourth-best among offensives in yards before contact per rush during the regular season. Success in the run game usually comes on the backs of the big guys up front, and that has certainly been the case in the playoffs.

Though they don’t get the same kind of press as others, Brown, Thuney, Andrews, Mason, and Cannon have been just as instrumental as anyone in the Patriots postseason success. Those five along with offensive line coach Dante Scarnecchia deserve a lot of credit for the team’s offensive success. With Aaron Donald and Ndamukong Suh staring them down on Sunday, they’ll have one more big test in order to bring home another Lombardi Trophy.