Beyond providing data for all 32 NFL teams, PFF also supports network broadcasters with game-preview packets that are used to enhance the in-game experience for fans and viewers. This Packers-Patriots preview features the same information our broadcast partners use for team research and in-game production.

Aaron Rodgers is putting together another elite season for the Packers. He’s been particularly great, as usual, on third and fourth downs. Rodgers has produced the most yards at 753, and his 111.6 passer rating on these downs ranks fourth at the position. 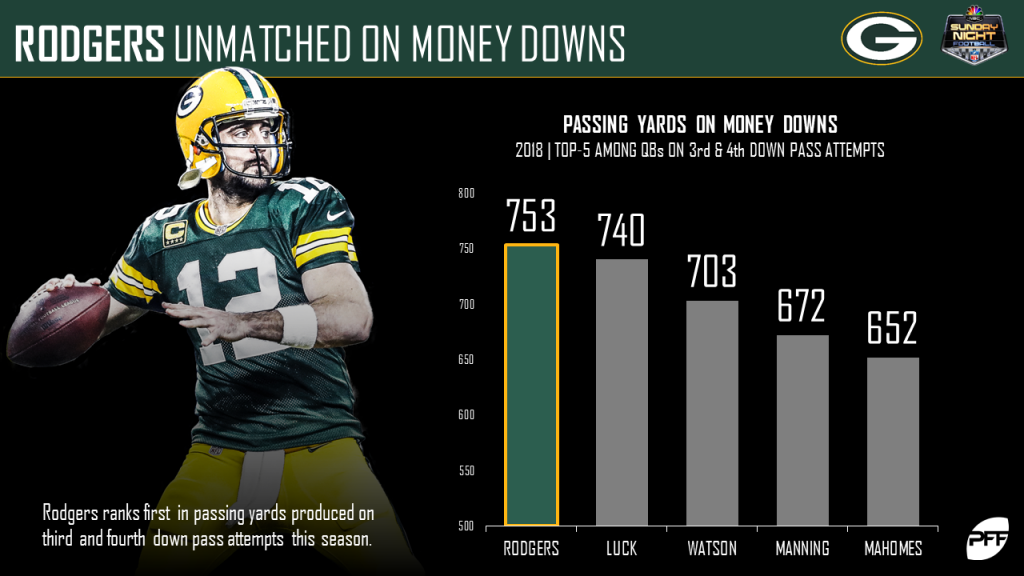 Packers’ running back Aaron Jones has performed the best out of the backfield for Green Bay this season, and it isn’t close. Jones is averaging 3.39 yards after contact per attempt, sixth-best among running backs, and he has forced 11 missed tackles on rushing attempts. In contrast, Jamaal Williams is averaging 2.44 yards after contact and has only forced two missed tackles on 63 rush attempts.

Last season, the Packers’ defense ranked 23rd in pressure rate at 33.2%. However, Green Bay has dramatically improved this season ranking third overall with a pressure rate of 40.7% going into Week 9. 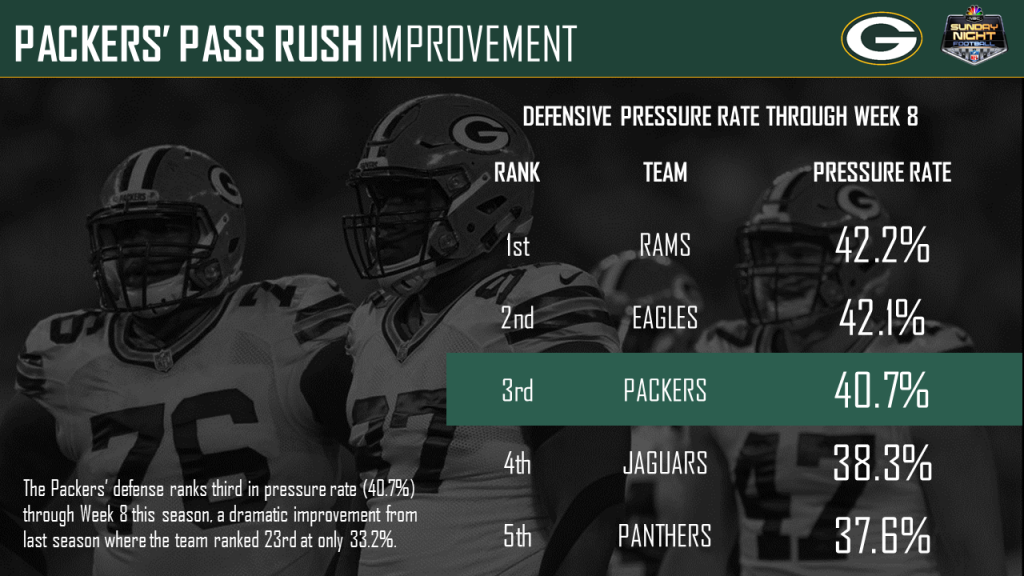 The trade leaves a void at safety

The trade of safety Ha Ha Clinton-Dix leaves a major void in the Packers’ secondary. His overall grade of 83.5 ranks fourth at the position, and he’s been a standout in coverage with four combined interceptions and pass breakups. Kentrell Brice (55.1 overall grade) and Jermaine Whitehead (57.8 overall grade) are left at safety for the Packers, and the move could open up playing time for 2017 second-round pick Josh Jones.

Brady big-time on third down

Tom Brady is beating father time by continuing his elite play for the Patriots in 2018. He’s been clutch this season, leading all quarterbacks with 11 big-time throws on third down. 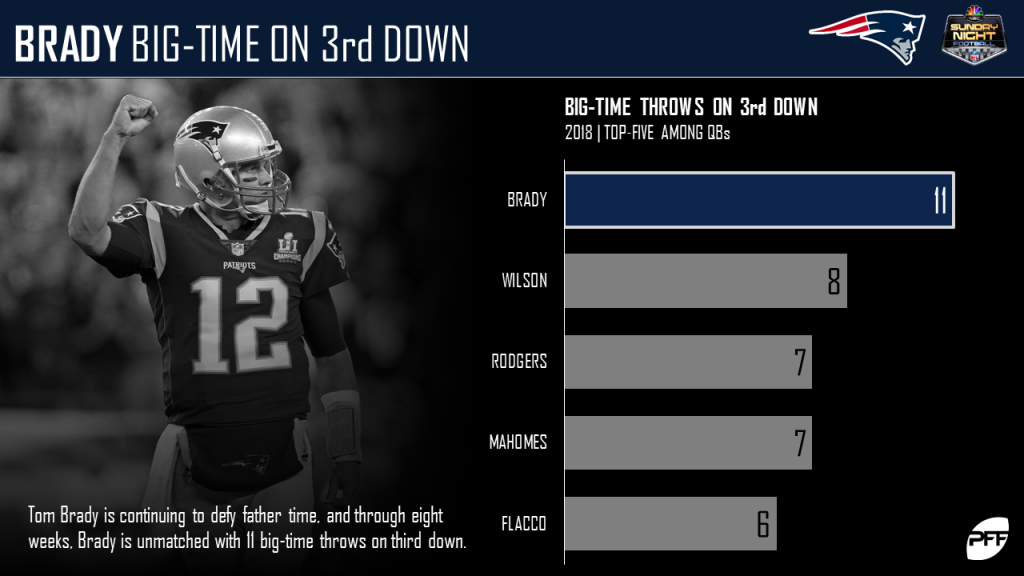 White is NFL’s leading receiver at running back

Through Week 8, James White has been the best pass-catcher out of the backfield in the NFL. James’ 70 targets lead all players at the position, his 55 receptions rank second, and his 90.3 receiving grade ranks first among running backs with at least 15 targets.

Trey Flowers has emerged as an elite edge defender this season. Flowers’ overall grade of 90.8 ranks first at the position with his 90.1 grade in run defense also coming out on top through Week 8. Flowers has generated a combined 45 pressures and defensive stops thus far. 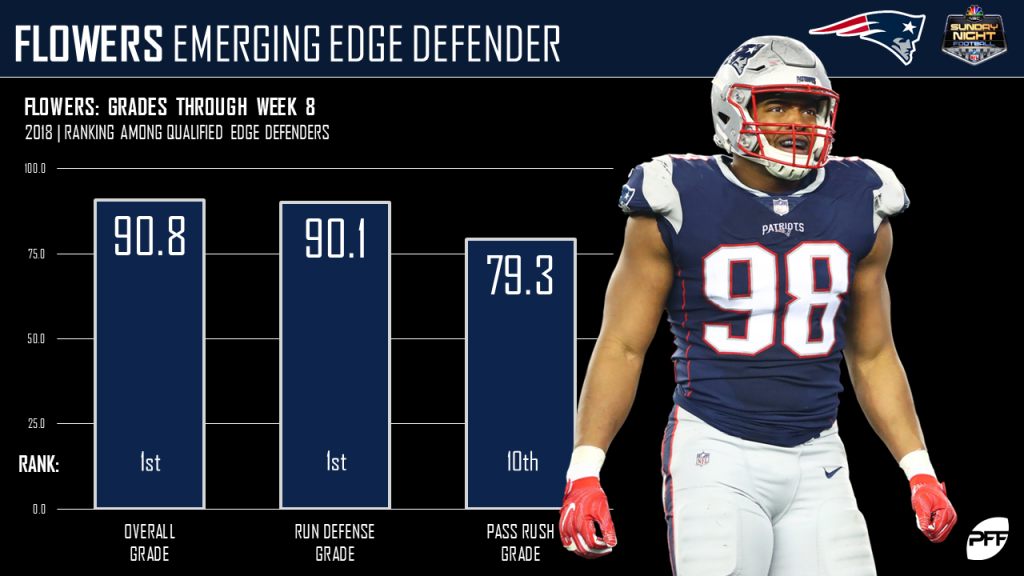 Gilmore shutting down receivers in 2018

Cornerback Stephon Gilmore is among the best at his position this season, allowing only 0.62 yards per coverage snap, fifth-best among corners. Gilmore has allowed just 18 receptions on 44 targets and has allowed a 70.1 passer rating when targeted in coverage through Week 8.

PFF Greenline has projections for the spread, moneyline and over/under of the Packers' matchup with the Patriots. Get its picks here.