Beyond providing data for all 32 NFL teams, PFF also supports network broadcasters with game-preview packets that are used to enhance the in-game experience for fans and viewers. This Rams-Broncos preview features the same information our broadcast partners use for team research and in-game production.

Goff: Dominant in all facets

Its been a long three-year-wait for fans of the Rams, but the 2016 first overall selection is finally starting to look like he was worthy of such a pick. When opposing defenses are not able to generate pressure on Jared Goff, his passer rating of 126.6 ranks third in the league. 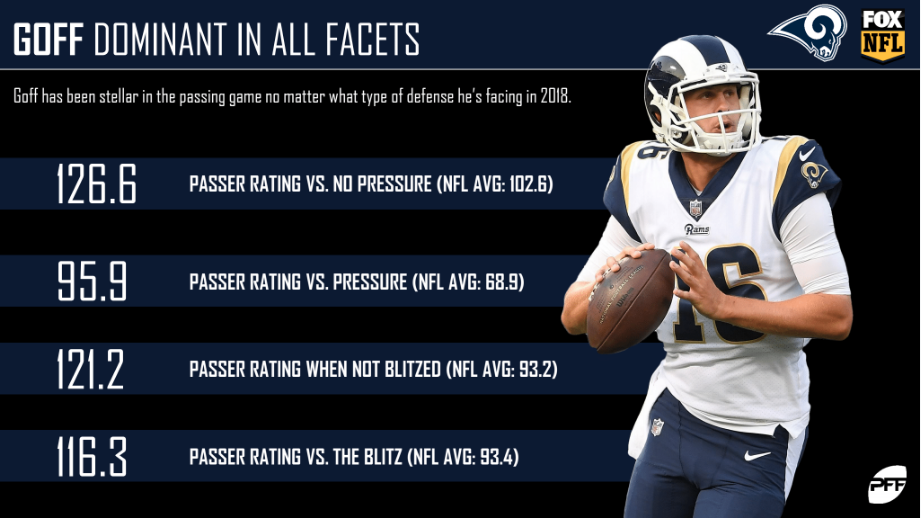 The big guys doing their job

The Rams' offensive line has managed to keep pressure away from Goff all season long, and have allowed just 27 total pressures in 2018. With Jared Goff's ability to pick apart defenses, the Broncos must find a way to generate pressure against the Rams this Sunday. 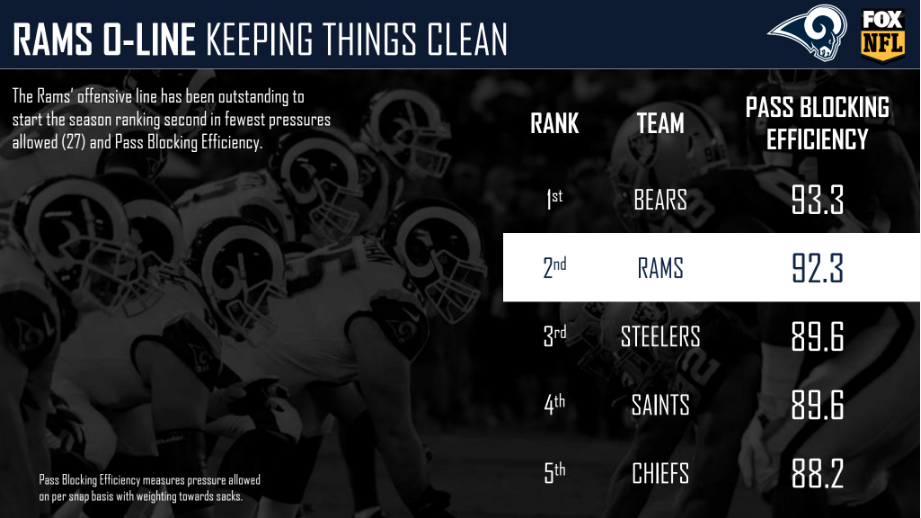 Through 5 weeks, Aaron Donald and Ndamukong Suh have combined for a whopping 48 pressures so far this year. The Broncos interior linemen better be ready for them on Sunday. 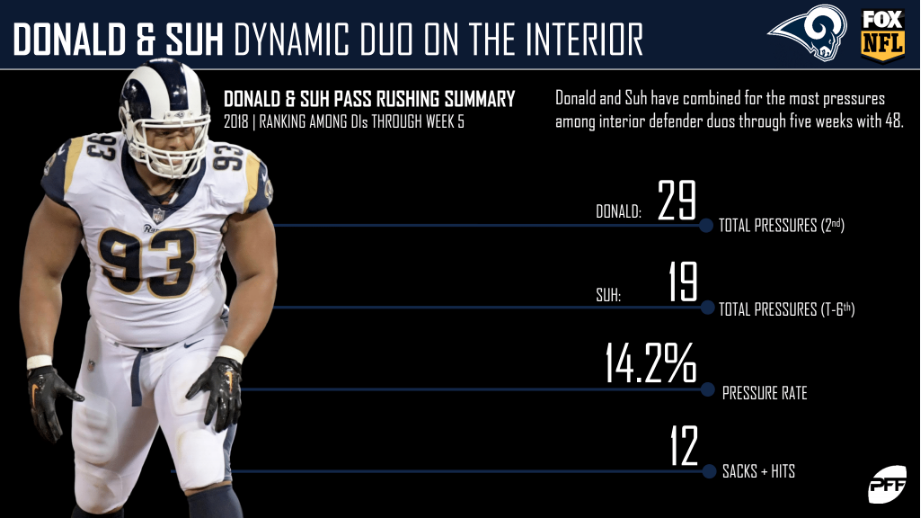 Injuries are taking their toll

After two shutdown weeks by their secondary, the Rams have struggled to stop opposing passers over the past three games. Marcus Peters, who has allowed 255 yards, 5 TD, and 2.00 yards per coverage snap over the past three weeks (all highest in the NFL in that period), in particular, has been struggling and could be a liability this week. 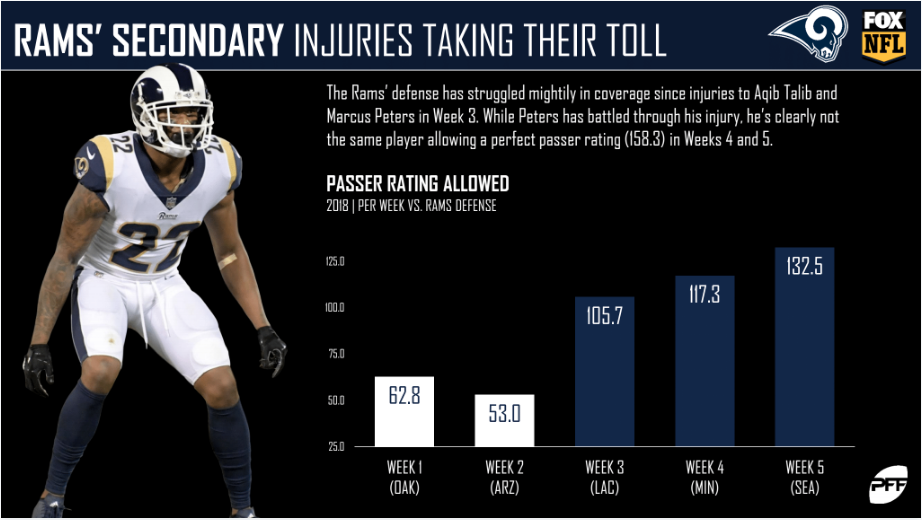 Demaryius Thomas has been Case Keenum‘s favorite target when he's faced pressure so far this year. When under pressure, Keenum has a passer rating of 128.8 when targeting Thomas. 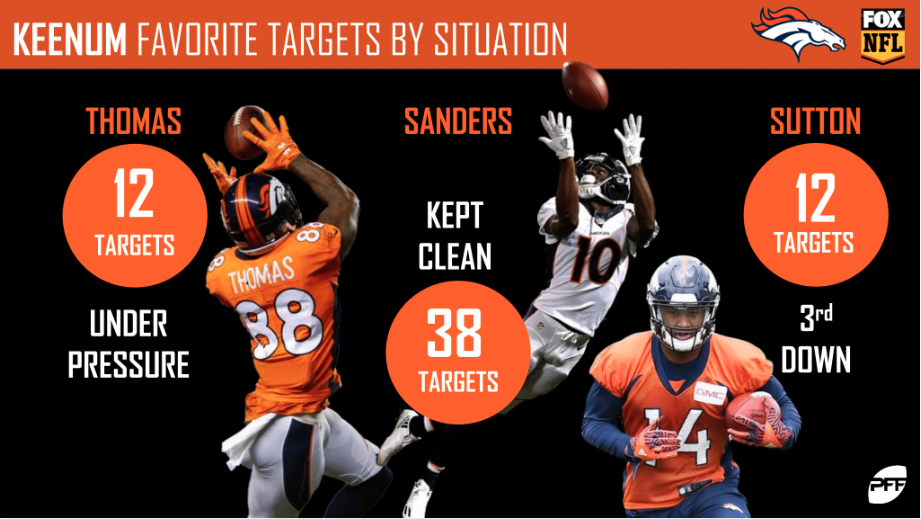 The Broncos seem to have struck gold with rookies Phillip Lindsay and Royce Freeman, who are both among the top 20 running backs in terms of yards after contact per carry. 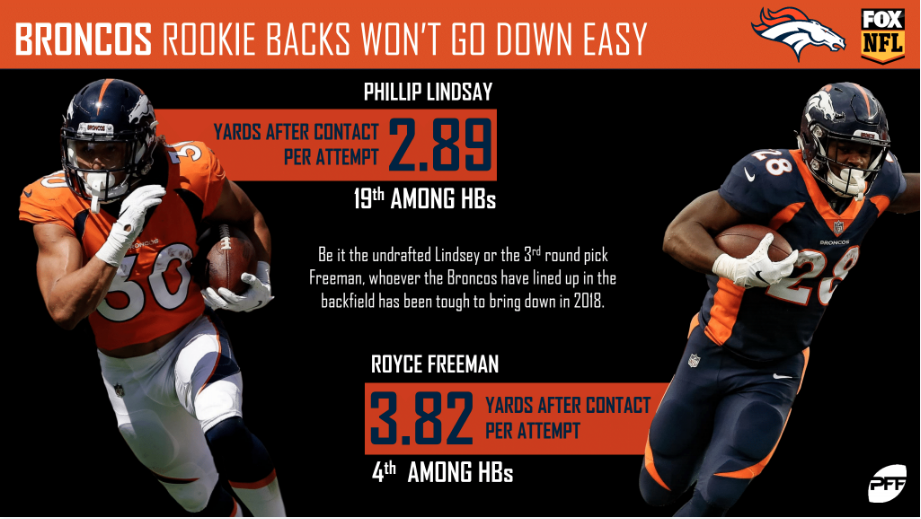 Miller going through a dry spell

After notching eight pressures through his first two weeks, Von Miller has generated just six over the past three weeks. With a run stop percentage of 5.7%, Miller's 2018 season has left a lot to be desired. 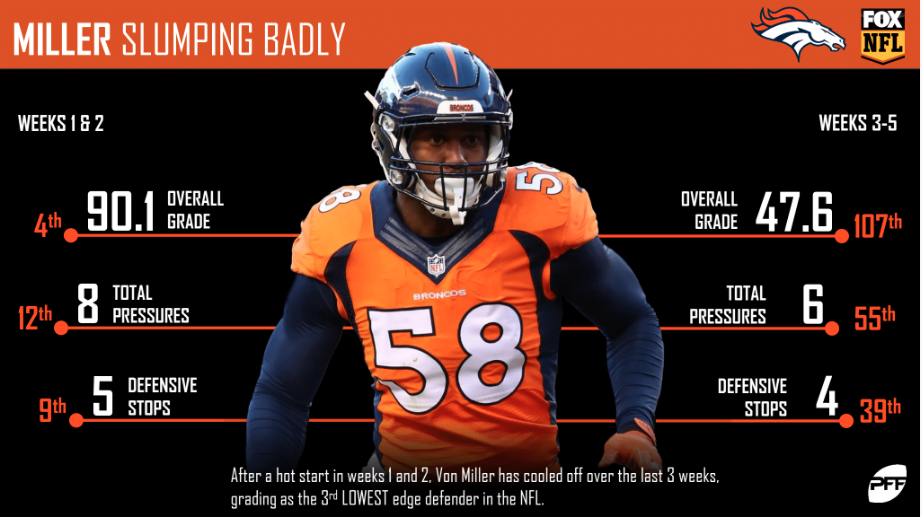 No fly, no more

With the exception of Chris Harris Jr., who has allowed a passer rating of just 65.4 this season, the “No Fly Zone” has looked like a shell of what they once were. The team has particularly struggled to stop plays of 20+ yards and will have their plate full against Jared Goff and the explosive Rams' offense. 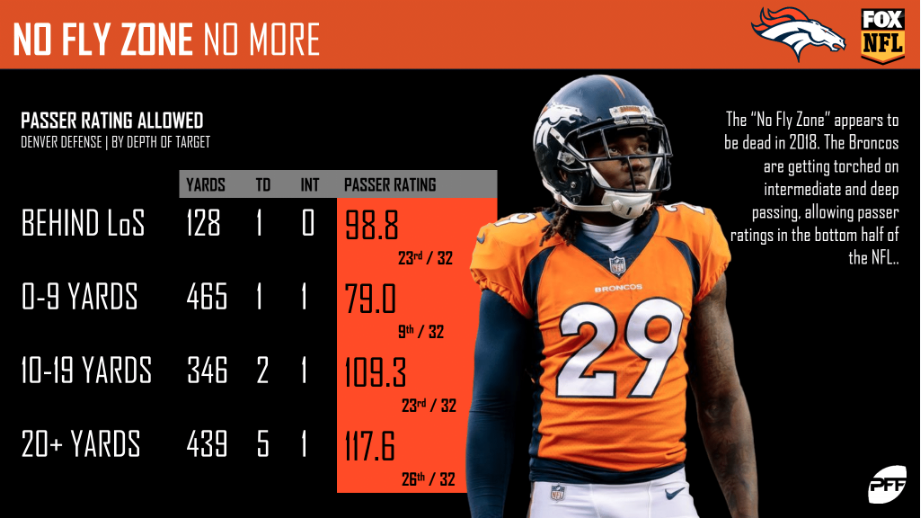 PFF Greenline has projections for the spread, moneyline and over/under of the Rams' matchup with the Broncos. Get its picks here.