NFL Week 16 Plays of the Week

Welcome to the Plays of the Week for Week 16 of the 2018 season. Like every week, our team of over 500 analysts has dissected and graded every snap of every game to bring you the most detailed and valid analysis you can find anywhere. Below are the plays that earned our highest grades this week – who do you think produced the best play of Week 16?

If you want to see how these players graded in their Week 16 games, check out all of our regular season advanced statistics and information with PFF Elite and Premium Stats 2.0. 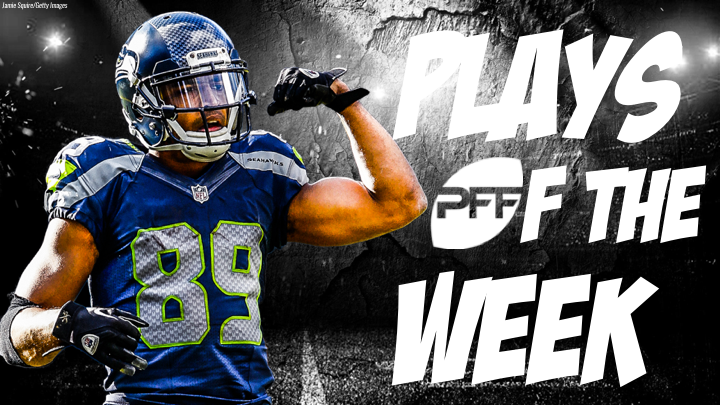 In hindsight, leaving Jadeveon Clowney one-on-one with a tight end in pass protection might not have been the best call. Here he not only got the sack, but he forced a fumble too.

It was a fantastic throw on the move by Russell Wilson, but an even better grab by Doug Baldwin. Sunday Night Football featured a lot of great throws and catches, and this was one of the best.

Speaking of big throws and catches, this one from Nick Foles to Nelson Agholor is up there. The ball traveled more than 50 yards in the air, and Agholor casually fell into the end zone after the slip by Tyrann Mathieu.

Deshaun Watson had himself a game on Sunday, and this play was something special. He should have been sacked three times on the play, but he managed to shrug off Eagles defenders before he picked up the first down with the throw.

Aaron Donald continues to dominate! The fact that he makes generating quick pressure like this look so easy is an indication of just how good he is. Another big performance means he has an outside shot at the single-season sack record next week.

Marlon Humphrey has really taken a step forward in his second season in the league, so it was fitting that it was he who sealed the win over the Chargers. Here he almost ran the route for the wide receiver before winning the contested catch for the turnover.

The Chargers had just taken the lead, and Lamar Jackson needed to make a play for the Ravens. He did just that, with arguably the best pass of his young career so far. Fellow rookie Mark Andrews was the beneficiary, shrugging off the defensive back on his way to the end zone.

We've seen Josh Allen make some huge throws in recent weeks, but this wasn't one of them. He looked to add some touch here, but J.C. Jackson read it and pounced on the floating ball.

This was as bad by Ryan Tannehill as it was good by Telvin Smith. Smith read where the ball was going and pounced perfectly to catch it in stride before taking it back for the touchdown.

At the midway point of the first quarter, this big-time catch by Allen Robinson II sets the Bears up in the red zone. Working against Tarvarius Moore and a slightly overthrown pass by Mitchell Trubisky, Robinson dives forward and secures the catch.