NFL Week 14 Plays of the Week

Welcome to the Plays of the Week for Week 14 of the 2018 season. Like every week, our team of over 500 analysts has dissected and graded every snap of every game to bring you the most detailed and valid analysis you can find anywhere. Below are the plays that earned our highest grades this week – who do you think produced the best play of Week 14?

If you want to see how these players graded in their Week 14 games, check out all of our regular season advanced statistics and information with PFF Elite and Premium Stats 2.0. 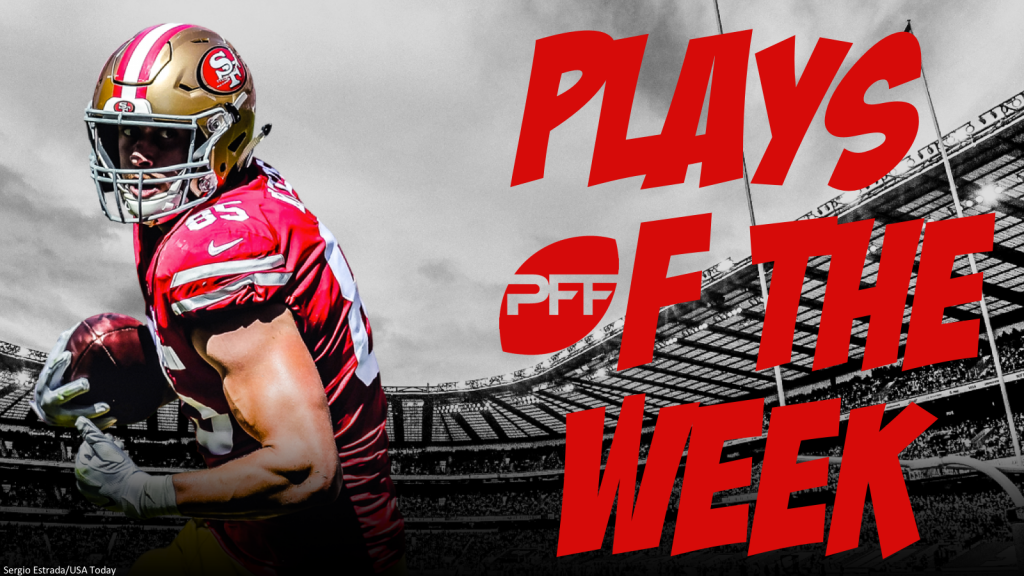 We’ve seen this happen a few times this season, and Budda Baker was the latest player to show off with a forced fumble and fumble recovery wrapped in one, stealing the ball for himself.

In a day filled with special throws, this was one of the best. Moving to his left, Baker Mayfield drops the ball in perfectly for Jarvis Landry for the touchdown.

One a rope. A dime. Whatever you want to call it, this was just a ridiculous throw by Tom Brady.

It was a rough day for the Atlanta offense, and cornerback Bashaud Breeland made Matt Ryan pay for the poor throw here, pouncing on the pass and taking it back the other way.

Amari Cooper has been a big-play threat since arriving in Dallas and delivered a big performance in their win over the Eagles. Once he gets by his man, it’s over.

A play that will live in Dolphins folklore forever, Kenyan Drake was actually looking to pitch this ball before he decided to take it himself. A bad angle from tight end/free safety Rob Gronkowski later and it was all over.

The Titans defense made life miserable for the Jaguars, with no play showcasing that more than this sack-fumble by Sherif Finch.

The Bears defense has been outstanding in 2018, and this play by Kyle Fuller helped shut down the Rams offense on Sunday Night Football. He reads where Goff wants to go with the ball and makes him pay.

Run of the year? You’ll be hard pressed to find a better one. Derrick Henry took this 99-yards, and he made the Jaguars defense look sheepish with some big stiff arms on his way to the end zone.

With the Ravens trying to drive late in the game, Justin Houston got the unblocked sack and forced a fumble from Lamar Jackson to kill the drive. Were it not for a missed field goal; this would have been the key play in deciding the game in regulation.

George Kittle is a monster in the open field. Here, he powered through the Denver defense with some strong running and nifty footwork for the big play after the catch.

The number of people on the planet who can make this throw is extremely limited. With the game on the line, Patrick Mahomes sprints to his right before throwing across his body to keep the Chiefs in the game.

Cornerback Darius Slay turned in perhaps his best game of the season in Week 14, highlighted by a pick-six that proved to be the go-ahead score.