Top 10 defensive players to improve their PFF grade in 2017

The 2017 NFL season saw a variety of spectacular defensive performances across the league, some from surprising, budding stars, some from those players we've come to expect. While some rookies stole the show and a veteran defensive tackle capped another tremendous year, what about those players who most improved their PFF grades last season? How did they improve their grades and where did they do it? We outline the top 10 most improved PFF grades among defensive players from 2016 to 2017: 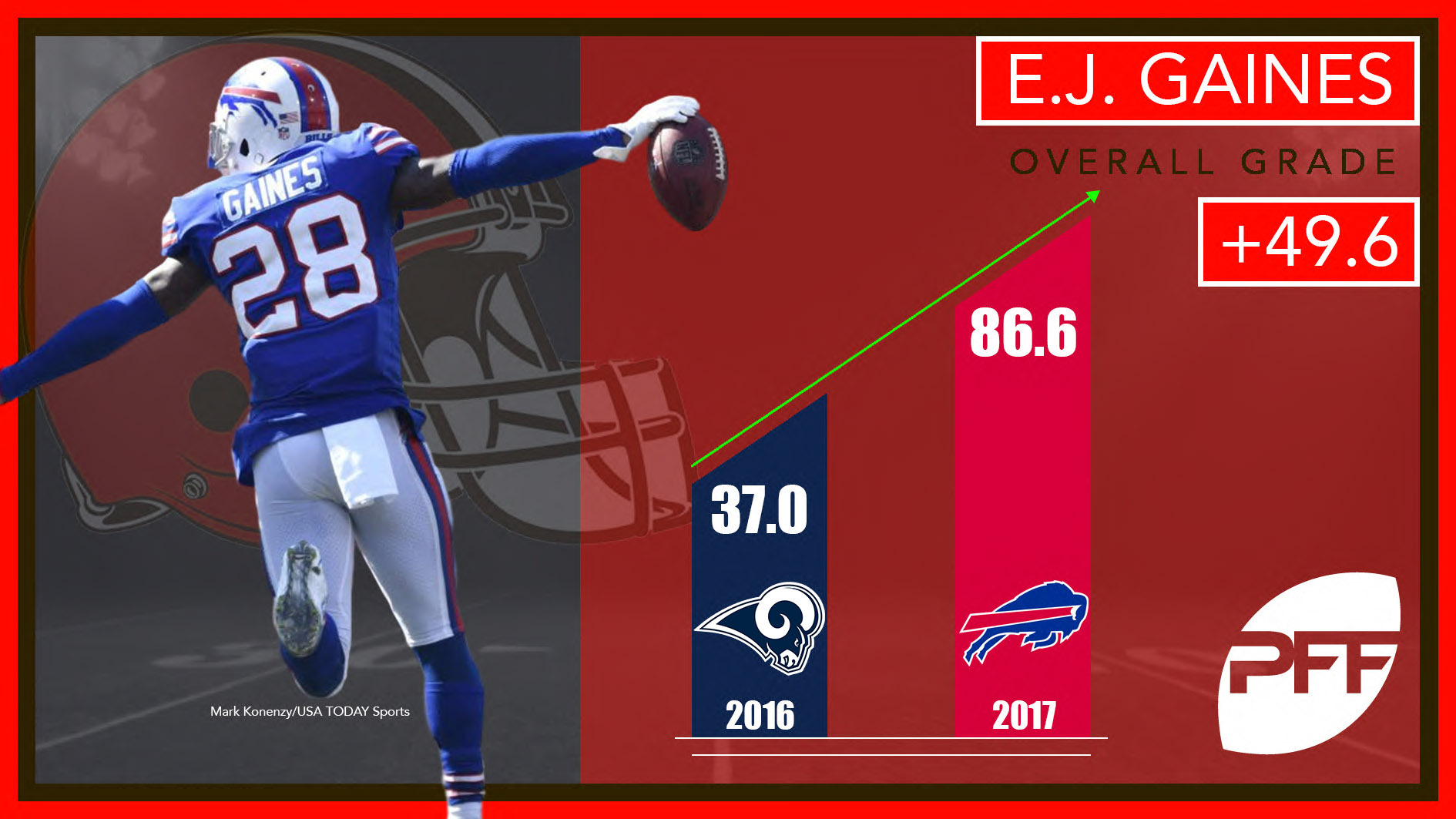 Gaines spent the 2016 season with the Los Angeles Rams, but he was limited to just 614 snaps as he dealt with lingering soft tissue injuries. When he was on the field, 40.8 percent of his targets came after the defense lined up in a man-coverage shell. All told, he allowed a passer rating of 139.1 and an average of 1.77 yards per coverage snap, which ranked 117th and 110th of 118 cornerbacks with at least 175 coverage snaps, respectively.

Gaines was traded to the Buffalo Bills as part of the blockbuster trade that sent star wide receiver Sammy Watkins in the opposite direction. As a part Sean McDermott’s zone-heavy defense, Gaines saw a much larger proportion of his targets (63.9 percent) after lining up in a zone coverage shell and he thrived. He ended the season allowing a passer rating of just 74.8 and an average of 0.82 yards per coverage snap, ranking him 28th and 14th among 124 cornerbacks with at least 165 coverage snaps, respectively.

Williams played sparingly throughout his rookie season in 2016, playing just 389 snaps in a backup role, but he struggled for the most part and allowed a passer rating of 109.6 which ranked 97th of 118 qualifying cornerbacks. He ended his rookie year with a coverage grade of just 41.3, ranking him 101st among the 111 qualifying players at the position.

With the arrival of Gus Bradley as the team’s new defensive coordinator for 2017, Bradley brought with him the infamous Seattle cover-3 defense that allows the cornerbacks to get physical at the line of scrimmage, which is something that Williams is very good at, and with veteran Jason Verrett out for the season through injury, Williams thrived as the starter. A whopping 73.5 percent of his targets came after Williams lined up in press coverage (compared to just 41.5 percent the year before) and he ended the year allowing a passer rating of 70.5, which was good for 22nd among 124 cornerbacks, while his coverage grade of 88.5 was good for 10th. 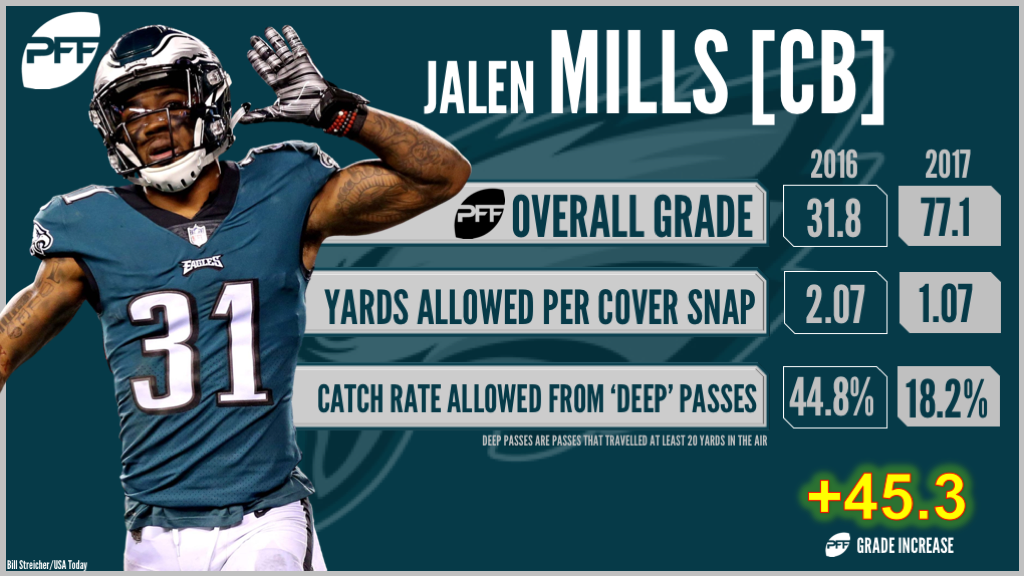 The seventh-round corner had a rookie year to forget in 2016 as he ended his first year in the league ranked dead last among cornerbacks with a PFF overall grade of just 31.8. Throughout the year, he was the league’s most frequently targeted cornerback, with opposing signal-callers opting to throw into his coverage once every 4.5 coverage snaps. All told, he allowed 58 of the 91 passes into his coverage to be caught while giving up a monstrous 848 receiving yards, the second-most among all cornerbacks.

However, Mills showed significant improvement in Year 2 and he was a reliable presence during his team’s Super Bowl run. He ended the year allowing 1.07 yards per coverage snap, a dramatic improvement from his 2016 mark of 2.07, which put him 116th of 118 qualifying cornerbacks. In particular, he performed much better against the deep ball in 2017, where he allowed just 18.2 percent on his targets of 20 or more yards downfield to be caught, bettering his 2016 mark of 44.8 percent. 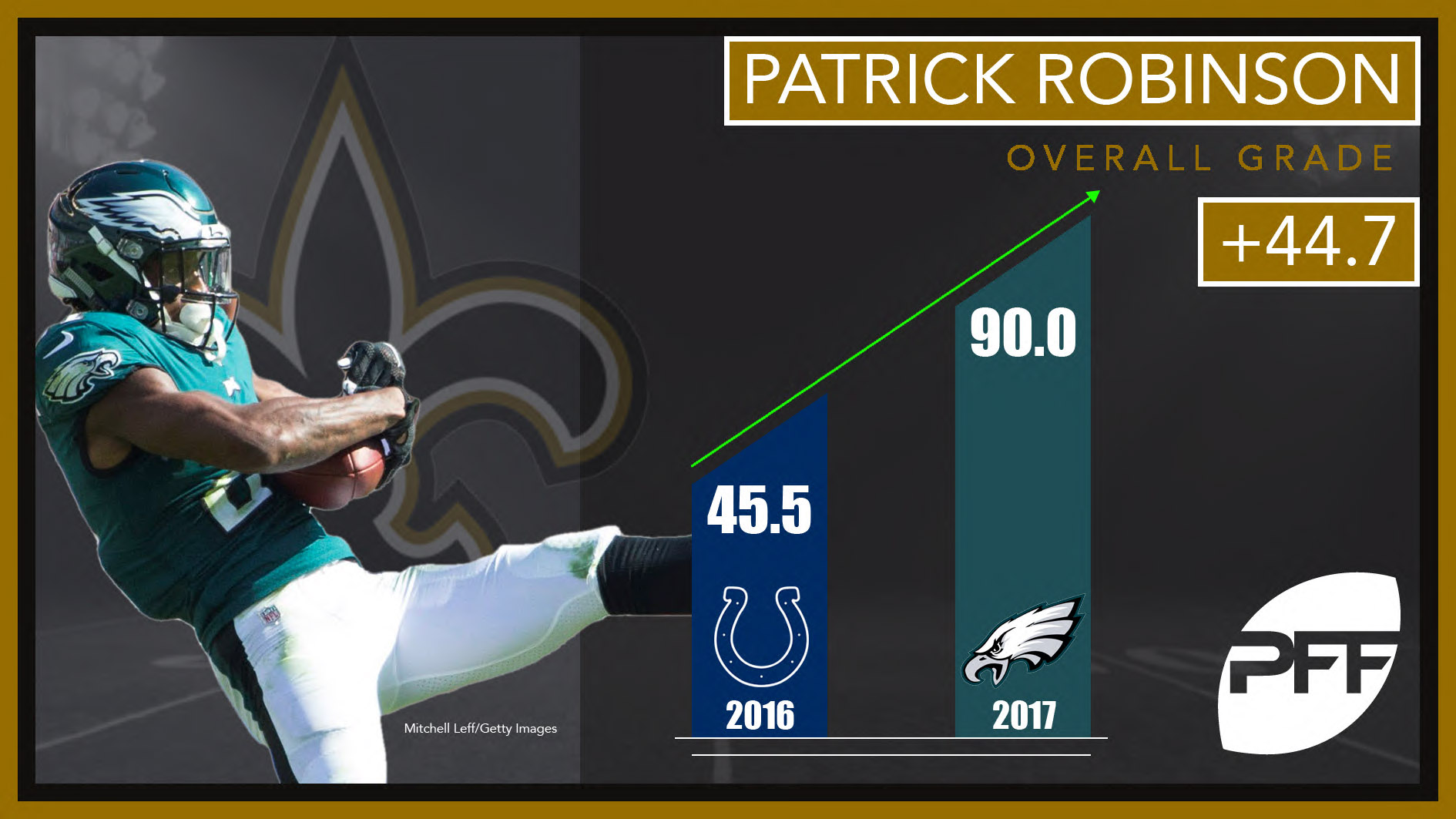 The veteran cornerback has bounced around the league since he entered the NFL as a first-round draft pick in 2010, and he spent time with the Saints and the then-San Diego Chargers before he landed with the Indianapolis Colts for the 2016 season. Playing sparingly throughout the 2016 campaign, he struggled in coverage for the most part and allowed an average of 1.46 yards per coverage snap and a career-high passer rating of 111.7, which ranked 89th and 101st of 118 cornerbacks, respectively.

Robinson then signed a one-year deal with the Philadelphia Eagles prior to the 2017 season, a deal would turn out to be one of the best offseason moves of the year. For the first time in his career, Robinson was utilized as the team’s primary slot corner and he thrived on the inside. He played the most snaps in slot among all NFL cornerbacks and all told, he allowed a passer rating of just 70.1 on throws into his primary coverage, the 16th-best mark among cornerbacks last year. 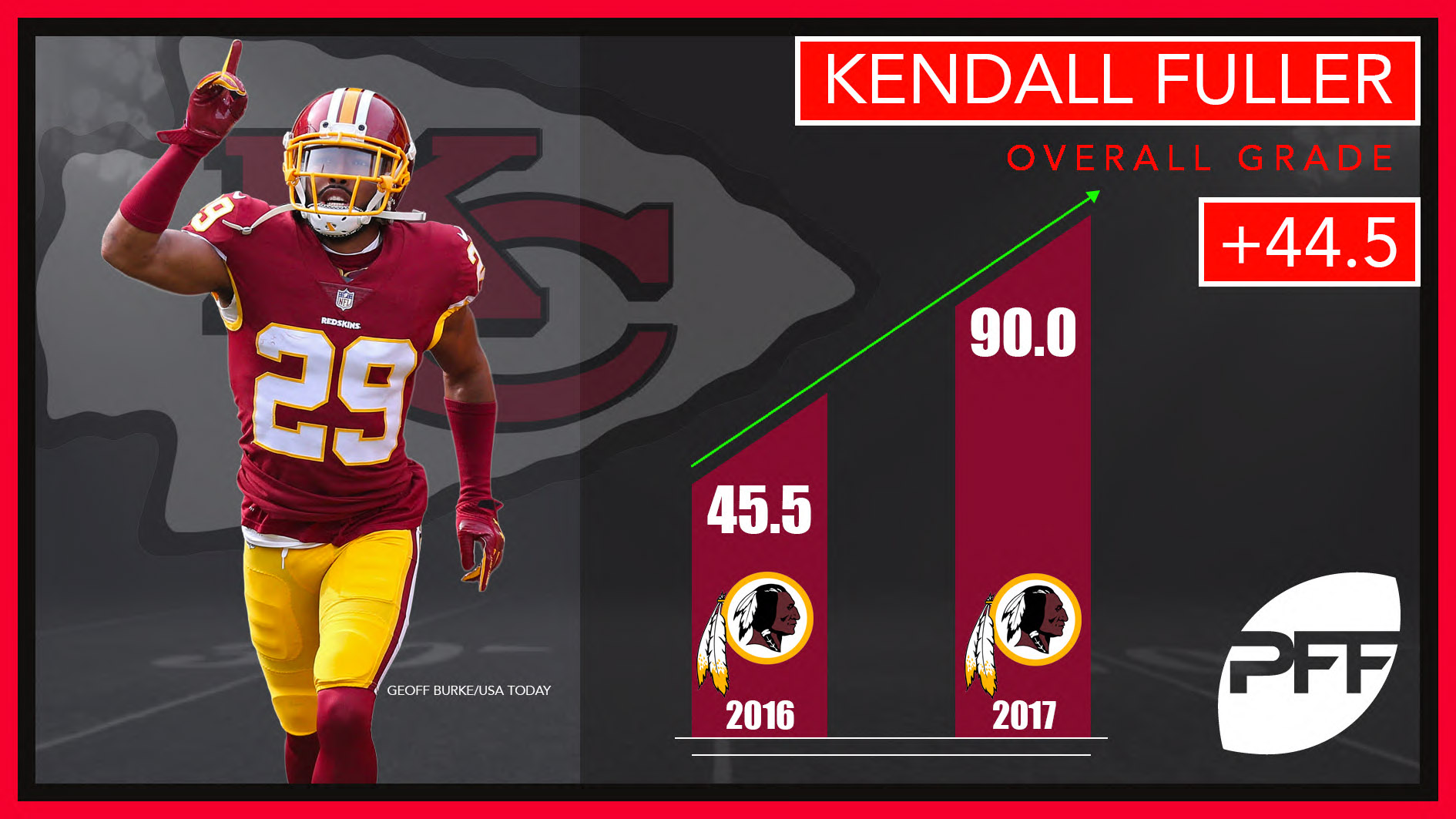 Fuller notably played through a nagging knee injury throughout his rookie season of 2016, but despite not being at 100 percent, he still logged 475 snaps for the Redskins and he really struggled in coverage. Working predominantly in the slot, Fuller allowed a passer rating of 122.7 and an average 1.99 yards per slot coverage snap, which put him 48th and 52nd among the 52 cornerbacks with at least 130 slot coverage snaps, respectively.

A year removed from his injury, Fuller was almost a different player on the field in 2017. In what only can be described as a reverse sophomore slump, Fuller enjoyed a spectacular breakout season where he allowed a passer rating of just 55.0 and an average of just 0.74 yards per cover snap when covering the slot, which ranked second and sixth among slot cornerbacks with at least 110 slot coverage snaps.

Prior to the start of the 2016 campaign, Whitehead was asked to move from his outside linebacker position in Detroit’s 4-3 defense to the middle linebacker position and he saw his production dip as a result, especially against the run. Whitehead ended the 2016 season with a career low run-defense grade of 42.6, after he managed just 25 stops on his 350 run-defense snaps, all while he missed a career high nine missed tackles against the run.

The following year, the coaching staff decided to move Whitehead back over to his outside linebacker position, where he’s undoubtedly more comfortable, and he saw his grade increase from 36.5 to 79.6 after he showed tremendous improvement against the run. Throughout the year, he produced 35 run stops, the second-most among 4-3 outside linebackers and a whopping 10 more than he managed playing in the middle during the 2016 campaign. 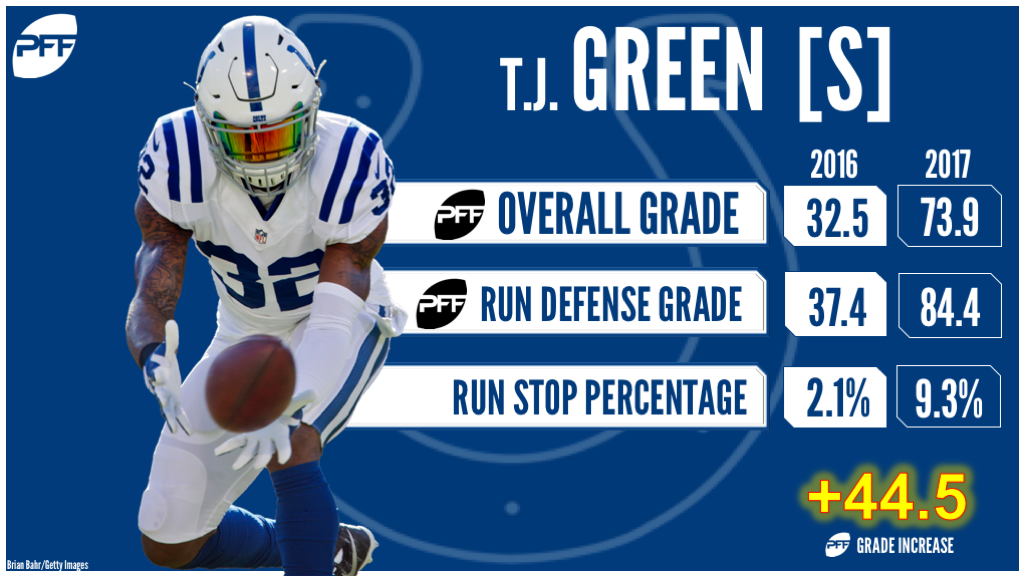 In the second round of the 2016 NFL draft, the Colts opted to take former Clemson safety T.J. Green and the pick was met with almost immediate criticism, as Green didn’t particularly seem to possess the necessary coverage skills to be successful at the NFL level. This prediction held true throughout his rookie year, as he ended the campaign ranked dead last among safeties in both overall grade (32.5) and coverage grade (32.7) after he allowed three touchdowns and an average of 1.30 yards per coverage snap, the worst mark among all safeties last year.

Prior to the 2017 campaign, Green received reps at cornerback and strong safety, and it became clear that the offseason work had made a dramatic improvement to Green’s game. He performed much better in coverage, allowing just 0.52 yards per coverage snap, but he most noticeably showed improvement against the run. In 2017, he played much closer to the line of scrimmage than he did in 2016 and he produced 12 stops with zero missed tackles, a far cry from the lowly three stops he managed a season ago.

Ngakoue ended his 2016 season with eight sacks to his name, so by basic numbers it looked like he had a reasonable season. However, in truth, his production in 2016 was far from stellar. His 47 total pressures took him 474 pass-rushing snaps and much of that pressure was late and not quite as impactful as it would seem. He ended the year with a pass-rush productivity of 8.4 – which put him right in the middle of the pack in terms of production, good for 26th among 53 4-3 defensive ends.

Last season, however, we saw a different kind of player. He finished with 70 total pressures from just 437 pass-rushing snaps and his pass-rush productivity of 12.8 put him third among the 69 players at the position. His overall PFF grade saw an increase of over 40.0 points, not only thanks to his added explosion in the pass-rush, but by a major improvement in his run-defense, which hasn’t become a strength but at least stopped being a liability for the Jaguars’ defense.

The undrafted cornerback out of Colorado had an up-and-down rookie season in 2016. The good: he showed the ability of finding and making a play on the football, evidenced by his six pass breakups. The bad: he gave up for too many big plays, evidenced by the fact that he allowed 65.5 percent of the passes into his coverage to be caught and he allowed a passer rating of 101.2 – the 68th-ranked mark among cornerbacks.

A year later, Crawley took a huge step forward and cemented his place as a solid, starting-caliber cornerback. He elevated his playmaking ability, breaking up 13 passes throughout the year and he more than cut down on the amount of plays given up, as he allowed just 50.0 percent of the passes thrown into his primary coverage to be caught, which was tied for the seventh-best mark among cornerbacks with at least 50 targets. He ended the year allowing a passer rating of just 80.7 – a dramatic improvement from the year before. 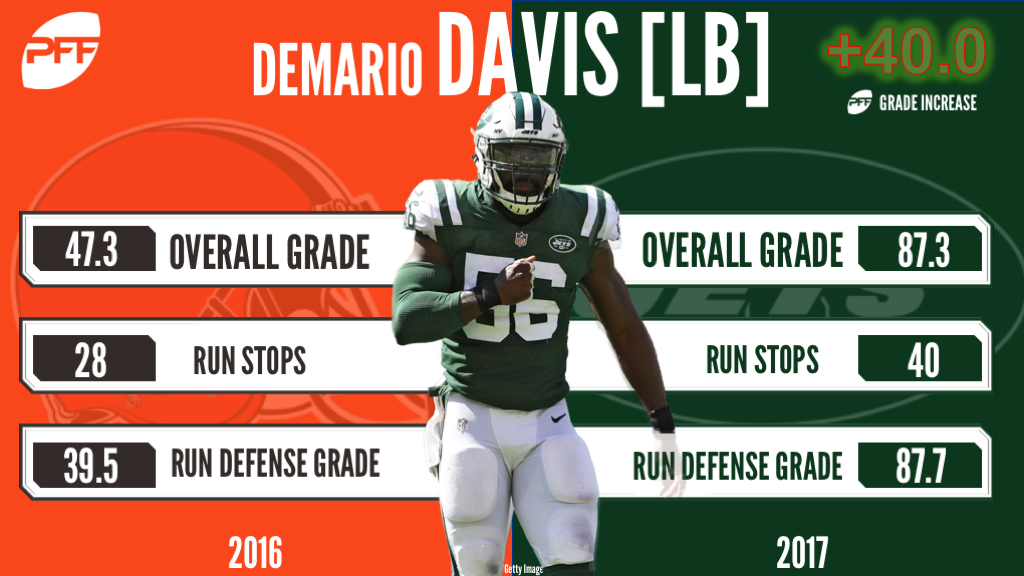 The veteran linebacker had a disappointing 2016 season with the Cleveland Browns and he ended the campaign with a 47.3 overall grade which ranked 62nd of 86 qualifiers. While he held his own in coverage, Davis’ performance against the run hindered his grading, as he managed just 28 stops on his 380 run-defense snaps, resulting in a run-stop percentage of 7.4 percent, which put him 40th of 60 qualifying inside linebackers.

Davis was then traded to the New York Jets prior to the 2017 season, which reunited him with the team that drafted him in the third round of the 2012 NFL Draft. Back in familiar territory, Davis had a bounce-back year against the run and produced a whopping 40 stops, the second-most among inside linebackers. As a result, he saw his run-defense grade increase from the poor 2016 grade of 39.5 to a near-elite 2017 grade of 87.7 – the 10th-best mark among linebackers.

[Editor's note: The above images of Gaines, Robinson and Fuller showcase that each of those three players have signed or been traded elsewhere this offseason by their new team logo in the background.]