Size, strength and athleticism: Detroit Lions WR Kenny Golladay checks all the boxes for the wide receiver position, but the question marks tied to his injury-plagued rookie campaign split by two-week highs and overlooked lows still need answers before the speeding hype train runs off the rails.

A 6-foot-4, 213-pound Northern Illinois product, Golladay surprised Lions and fans with his performance early in his NFL career, as he caught 3-of-4 targets for 53 yards and two touchdowns en route to a 91.8 game grade in Detroit’s second preseason game. Combine his two-touchdown preseason performance with an abundance of positive reports coming out of training camp and an eye-catching debut in the Lions’ home opener, and out came a rising star no amount of ensuing lows could pull down.

Golladay hauled in 4-of-7 targets for 69 yards and two touchdowns against the Arizona Cardinals in Week 1 of the 2017 season, giving Lions' fans backing into their preseason hype of the then-rookie. Golladay’s touchdowns were indeed spectacular, the first of which a contested catch in the end zone from 10 yards out and the latter a 45-yard diving touchdown reception. Of course, his two drops and one false start penalty were lost in the excitement, as were the next nine underwhelming performances.

After his strong start, Golladay ran 56 routes in Weeks 2 and 3 before going down with a hamstring injury that would cost him the following six games. He returned to the field in Week 10 but failed to even draw close to his Week 1 production until the team’s final game of the season. Considering Weeks 2-3 and Weeks 10-16 (nine games total), Golladay caught 22-of-38 targets for 328 yards and zero touchdowns across 229 total routes. Among receivers with at least 20 targets in said span, Golladay 70th in passer rating when targeted at 75.3. 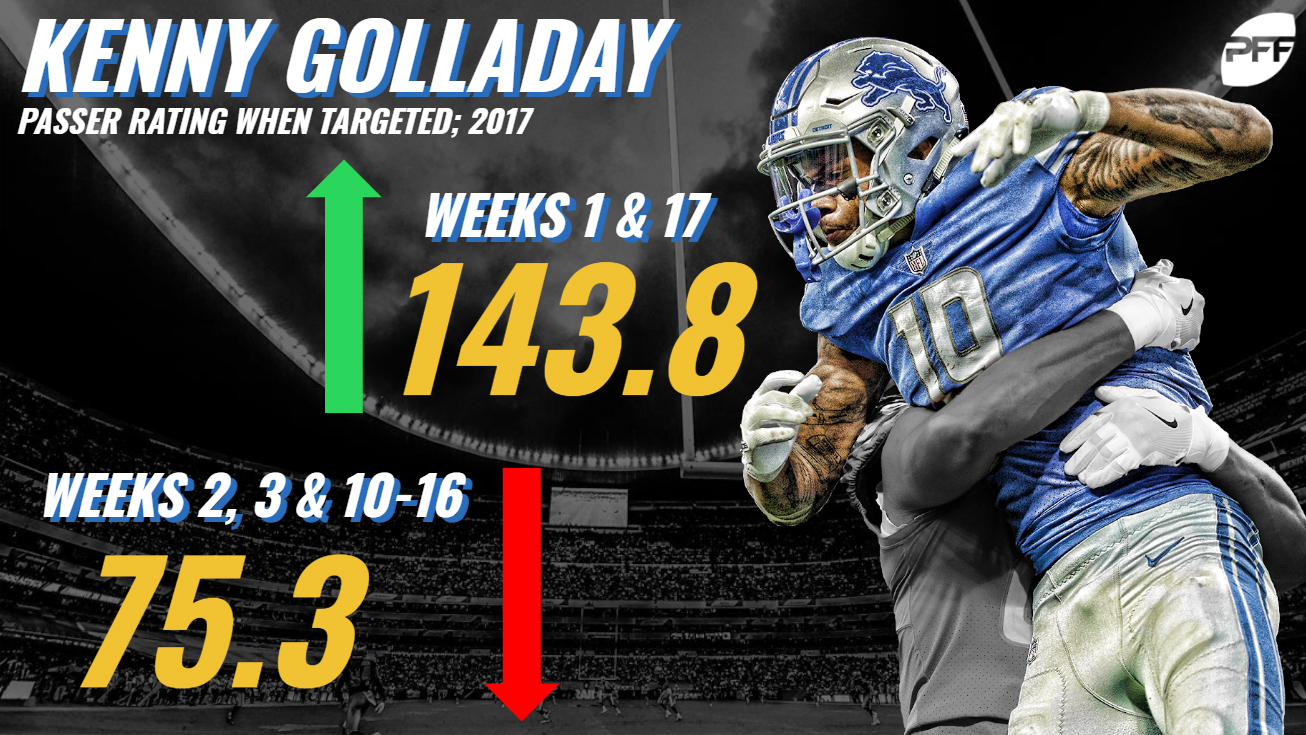 Golladay’s high-performing teammates (i.e. Marvin Jones, Golden Tate), in addition to his injury, obviously played a role in his nine-game lull in production, but his place in the target share doesn’t explain his lackluster efficiency. Golladay averaged 1.43 yards per route run (328 yards on 229 routes) in the same nine-game span, ranking outside 49th among qualifying receivers.

As previously mentioned, Golladay picked up steam with his 80-yard, one-touchdown performance in the Lions’ season finale. One of his two catches in the game, Golladay was the beneficiary of what seemed to be a blown coverage in the Green Bay Packers’ zone and pulled off well-timed stiff arm for a 54-yard touchdown in the second quarter. He then made a toe-tapping, highlight-reel catch along the sideline for a 26-yard gain later in the contest.

It’s easy to fall blindly in love with Golladay as his size and play-making ability all combine for quite the love affair. However, sample size is still a major concern and will continue to be until Golladay’s highlight reel isn’t just four regular season catches and a strong preseason performance.

Regardless, despite the inconsistency during the season, factoring in all 17 weeks last year, Golladay still finished with the league's fifth-highest receiving grade among rookie receivers. 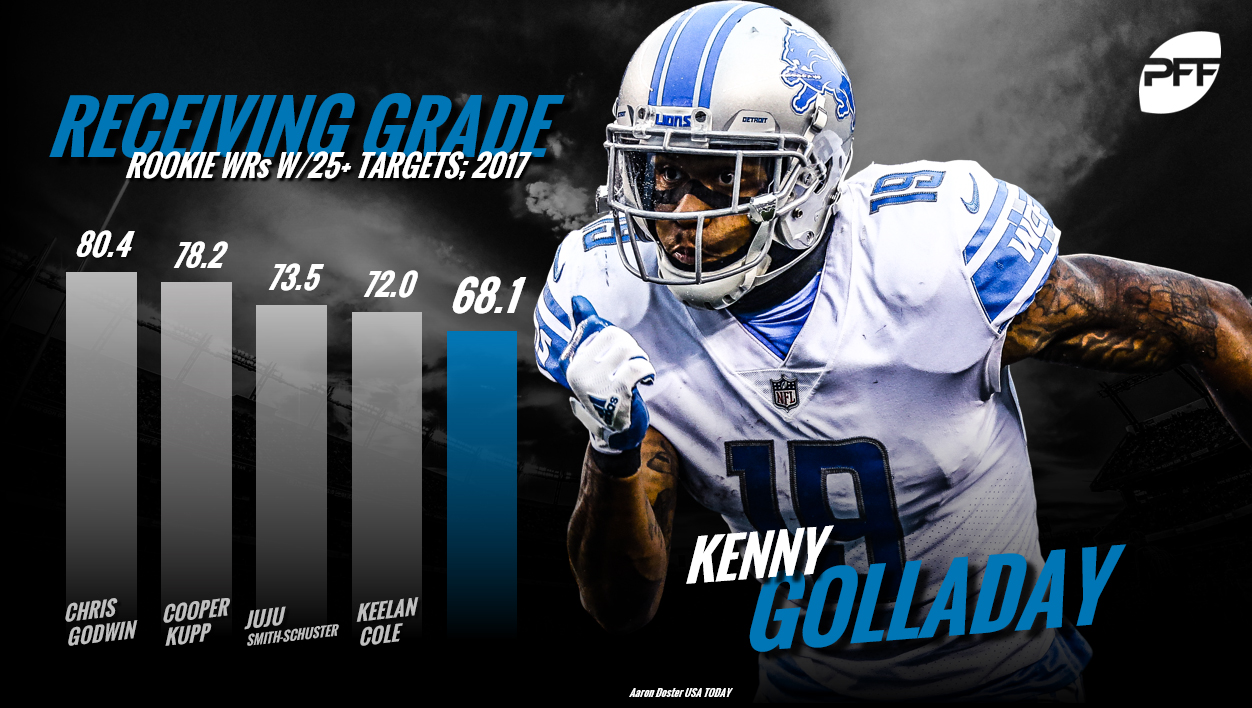 If healthy, Golladay will see an increase in snaps played and total targets in 2018, which will likely lead to more spectacular sideline grabs and diving touchdowns. However, he'll have to prove to be more of a consistent threat if he wants to push the aforementioned Tate and Jones for targets in the Lions offense.