At PFF, we pride ourselves in the fact that we can provide data that isn't available anywhere else, and now for the first time, we can take a deep dive into the last 13 seasons of the PFF era to evaluate quarterbacks by ground type to see if they perform best in either an open-air stadium, like Lambeau Field, or an enclosed stadium, like the Mercedes-Benz Superdome.

So whether you're curious to see whether your franchise quarterback makes the cut or an avid fantasy owner looking to gain an edge in your upcoming fantasy leagues, here are the PFF era's best passers in domes.

[Editor’s note: For this article, we have classified all enclosed stadiums and stadiums with retractable roofs as domes.] 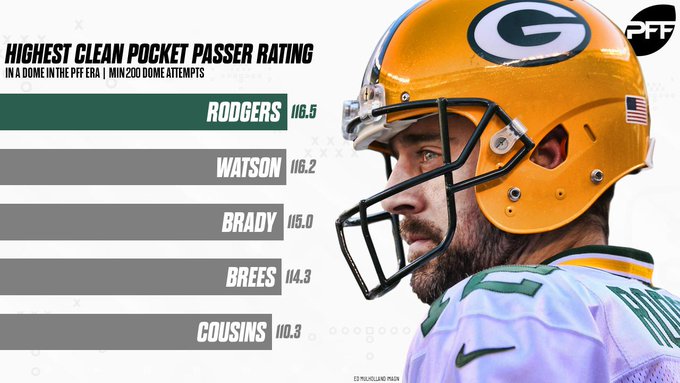 Passer rating from a clean pocket

There is arguably no greater passer in the league today than Rodgers, so it's no surprise to see him at the top of this particular ranking. In domes, the Packers quarterback has completed 608-of-841 clean-pocket attempts for 7,440 yards, 55 touchdowns and nine interceptions. Rodgers' 8.85 yards per attempt also ranks first among the 61 qualifying quarterbacks on this list.

The now third-year quarterback has completed 191 of his 260 clean-pocket attempts in a dome setting, tallying 18 touchdowns, three interceptions and 2,158 yards in the process. Watson's clean-pocket completion percentage of 73.5% also ranks third among this list of 61 qualifying signal-callers.

The King of the Mercedes Benz Superdome has attempted over 1,300 more passes than the next closest quarterback on this particular list — making his passer rating here all the more impressive. All told, Brees has completed 3,043 of his 4,114 clean-pocket attempts in a dome, and he's racked up 35,057 yards, 271 touchdowns and only 68 interceptions in the process. Among the 61 qualifying quarterbacks on this list, Brees' negatively graded play rate of 8.6% ranks second, and his big-time throw percentage ranks seventh.

After starting his career at FedEx Field, Cousins has now found a home in U.S. Bank Stadium in Minnesota — where his clean-pocket presence will come in handy. On his clean-pocket pass attempts in a dome, Cousins has completed 73.8% of his 454 passes for 3,655 yards, 28 touchdowns and eight interceptions. More impressively, his negatively graded throw rate of 9.0% ranks third among the qualifying quarterbacks on this list.

Passer rating on deep throws (throws of 20-plus yards downfield)

Taking out the “expected” throws from the data set, here, we look at the pass attempts of 20 or more yards downfield to see which signal-callers have performed best on deep shots while under the safety of a closed roof. To make this list, the player must have attempted at least 100 deep pass attempts in enclosed stadiums since 2006 (regular season only).

From his career dome games, Rodgers has completed 50-of-133 deep pass attempts for 1,984 yards, 15 scores and four interceptions. Among the 20 qualifying players on this list, Rodgers' deep passer rating, his deep-ball turnover-worthy play rate (2.3%) and his deep-ball big-time throw rate (33.8%) all rank first.

One of the most underrated players of his generation, Romo was lights out when he was asked to uncork the deep ball in a dome. During his time in the PFF era, he completed 92-of-230 deep pass attempts for 3,232 yards, 37 scores and 11 interceptions.

Luck has connected with his receiver on 39.8% of his deep passing attempts in a dome, and he has racked up 3,891 yards and 32 scores in the process. Over 40% (44.8%) of those deep shots earned a positive grade in our system, and his 77 total big-time throws rank fifth among the qualifying quarterbacks on this list.

A sure-fire first-ballot Hall of Famer, Peyton Manning spent the best part of a decade terrorizing his opponents underneath the lights of Lucas Oil Stadium. On deep passes both at home in Indy and at other enclosed stadiums, Manning completed 102-of-265 attempts for 3,346 yards, 33 touchdowns and 14 interceptions. He logged 84 big-time throws to just 16 turnover-worthy plays.

A product of our one-of-a-kind quarterback grading system, we take a player's highest-graded throws (big-time throws) and divide it by the total pass attempts, which effectively measures the rate at which a player pulls out a high-percentage throw. To make this list, the player must have attempted at least 500 total pass attempts in a dome setting since 2006 (regular season only).

Far from a stranger to the occasional high-percentage throw, Big Ben has recorded 84 big-time throws across 593 pass attempts in a dome setting, while 187 of those throws earned some kind of positive grade in our system.

Nipping at the heels of the Steelers quarterback is Rodgers — not surprisingly — who has tallied 86 big-time throws from his 1,086 pass attempts inside a dome. In addition to his big-time throw percentage of 7.9%, he also ranks seventh among the 39 quarterbacks on this list in positively graded throw percentage (29.7%), while his turnover-worthy play rate of just 1.9% ranks first.

The Chargers signal-caller has recorded 46 big-time throws from 622 pass attempts in an enclosed stadium. His corresponding turnover-worthy play rate (2.3%) is tied for fourth among the 39 qualifying quarterbacks.

In the PFF era, only Drew Brees (320), Matt Ryan (199) and Matthew Stafford (192) have recorded more big-time throws inside dome stadiums than Peyton Manning (125), who did so on 2,042 total pass attempts. His 30.9% positively graded throw percentage also ranks third among the 39 qualifying players at the position.

It's not the first, and it certainly won't be the last time we see Brady and Manning neck and neck. The longtime Patriots quarterback has tallied 35 big-time throws from 574 pass attempts in a dome setting, resulting in a big-time throw percentage of 6.1% that ranks tied for fourth among the 39 quarterbacks who've attempted at least 500 total pass attempts in a dome setting since 2006 (regular season only). 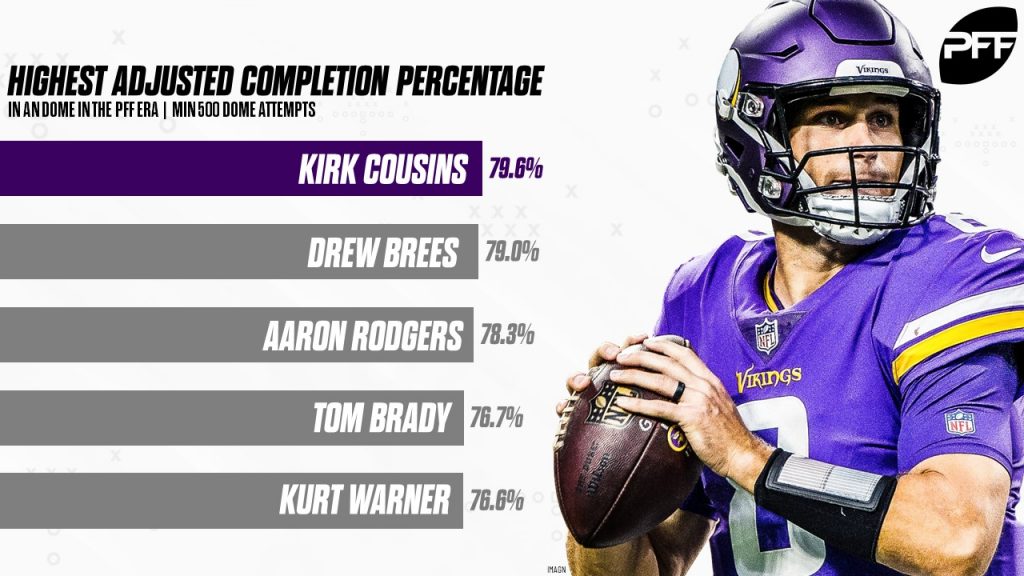 PFF’s adjusted completion percentage credits passers for on-target throws that are dropped by receivers, but it also removes passes that are thrown away (i.e., not targeting any receiver), passes batted at the line of scrimmage, passes that were spiked and passes thrown when the quarterback was hit as he threw. To make this list, the player must have attempted at least 500 total pass attempts in enclosed stadiums since 2006 (regular season only).

Of his 692 career attempts in a dome, Cousins has suffered 29 drops and 13 batted passes, while he's recorded four spikes and 29 throwaways. Add in the five times he's been hit as he threw, and it all equates to an adjusted completion percentage of 79.6% that ranks first among the 39 qualifying quarterbacks in the PFF era.

Simply put, Brees is the gold standard of accuracy in the modern NFL, and no adjusted completion percentage ranking is complete without Brees at the top. In dome-only games, Brees has tallied an adjusted completion percentage of 79.0% off the back of 50 hit-as-throwns, 93 batted passes, 27 spikes, 260 drops and 154 throwaways. Brees' second-place finish here is despite the fact that he's logged 5,425 pass attempts in a dome throughout the last 13 seasons, almost 2,000 more than the next closest quarterback.

So, as it turns out, this Rodgers guy is quite good in a dome setting. On his 1,086 attempts in an enclosed stadium within the PFF era, 13 have been batted at the line of scrimmage, five have been spikes, 71 have been dropped, and 42 have been thrown away, which gives him an adjusted completion percentage of 78.3% – the third-best mark among quarterbacks with at least 500 attempts.

In dome-only games, Brady has tallied an adjusted completion percentage of 76.2% off the back of eight hit-as-throwns, six batted passes, one spike, 32 drops and 13 throwaways.

On his 1,122 pass attempts in an enclosed stadium, Warner recorded 13 spikes and 22 throwaways, while 52 of his passes were dropped and 17 went awry due to being hit as he threw the ball.