Earl Thomas is the safety every team wants and only the Seahawks have, for now

Seattle Seahawks safety Earl Thomas sat out practice last week only to step on the field against the Dallas Cowboys, notch a pair of interceptions and cement his place as the best single-high free safety in the game. He currently has the highest coverage grade of any player, at any position, through three weeks and is at the center of a whirlwind of trade rumors given his dissatisfaction with his current deal in Seattle. 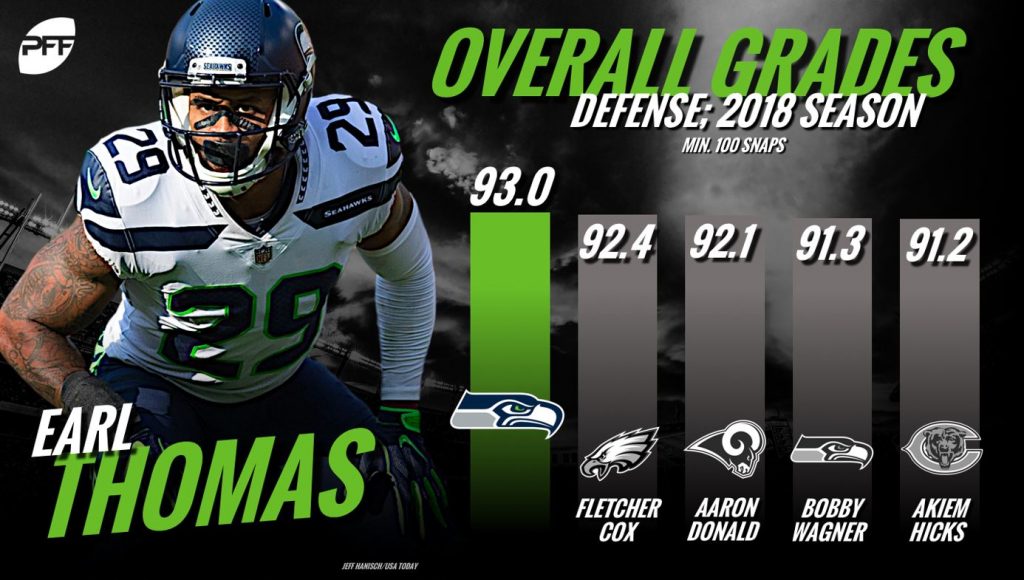 Thomas being the benchmark for quality free safety play isn’t a ground-breaking revelation, but his importance to that single-high safety scheme is impossible to overstate.

Seattle’s Legion of Boom-era dominance on defense caused that scheme to proliferate throughout the NFL. Seahawks coordinators were pursued as new coaching hires by other teams enamored by the scheme’s success, but none have managed to replicate the coverage superiority of that original lineup. At least four other teams now run the same kind of system, and the reason none has managed to port over the same scheme without looking like something is missing, is they are each missing an Earl Thomas.

Without a single-high free safety that has the range to get sideline to sideline in the way Thomas can, the defense doesn’t look the same.

We’ve spent time in the past quantifying how well Thomas plays in that role, but now it’s time to explore why exactly he is that good and why it’s so critical to that defensive scheme.

Thomas has more than enough range to get to the sideline from a single-high look, something most safeties from that alignment struggle with. In fact, he has so much range that he can get to either sideline without being aligned in the middle of the field. The Seahawks can cheat their coverage looks by leaning Thomas in one direction or the other, knowing that he can still make it back to the far side deep ball. This allows them to help specific cornerbacks, react to offensive formations and personnel wrinkles from an alignment standpoint and still be able to be a factor on the deep pass down the sideline.

Clocked at 4.43 seconds at the combine, Thomas has as fast a 40 time as you’re likely to find from a safety, but like all great players, the first yard is in his head. He sets off earlier to the play than any other safety because of how quickly he can read, diagnose and react to the play.

What is often labeled as ‘instincts’ is actually the product of relentless tape study and the understanding of opposing offenses and passing concepts, allowing him to appear in places other safeties never get close to. This speed, quickness, diagnostic ability and reaction time all fold together to create the term ‘range’ that gets applies to Thomas, and it simply means that from any given alignment on the field pre-snap, he can cover a greater area of the field than anyone else. Because of that, he can impact more plays than most safeties, or any safety that is tasked with lining up as a single-high free safety.

Since the start of the 2012 season, Thomas has six more interceptions than any other defensive back when lined up as a deep-lying free safety. He also leads all safeties in forced incompletions from that alignment. Typically, that alignment is designed to protect the defense from the big play over the top. In cover-3, the safety is just supposed to ward off those deep passes down the middle of the field, and if he has the range and skills to make it over to help the outside cornerbacks, then he adds more value to the position. Where Thomas is different is that he can protect the defense from those deep passes and still be a factor on plays underneath those deep zones.

His range extends vertically as well as horizontally across the field.

Over that same time frame, Thomas has six more defensive stops (tackles which constitute an offensive failure on the play) than any other safety, and most of the next-closest players are run-stuffing strong safeties by trade that saw significantly fewer snaps at free safety than he did. And even when they were put in that position, they clearly had eyes for the underneath plays more than a natural free safety would. Thomas had more tackles and assists than any other safety from that free safety alignment too, and even on a per-snap basis, was significantly more ‘active’ when it comes to featuring in the play statistically than most other free safeties.

This characteristic of his play is something that’s been noted anecdotally before, and it’s usually attributed to that range he plays with and moved on from, but there’s an added wrinkle to the data that helps to illustrate the point – how far off the line he typically is at the snap.

While we tend to assume most safeties playing similar positions line up at a uniform depth from the line of scrimmage, the reality is there is a significant variance from team to team, and even player to player depending on scheme, assignment and physical capabilities of the safety in question.

Something that will come as no surprise to anybody familiar with the Cleveland Browns’ defense, Damarious Randall leads all safeties in terms of average depth from the line of scrimmage, if you focus purely on single-high safety looks. He has lined up an average of 18.2 yards off the line within Greg Williams’ defensive scheme. On the few occasions where Jabrill Peppers has been that guy this Season, he has been even further off the line (19.5). That’s around three yards deeper on average than most free safeties line up. Washington’s Montae Nicholson is at 15.8 yards from the line on average, Green Bay’s HaHa Clinton Dix is at 15.6 and Curtis Riley of the Giants is at 15.0. 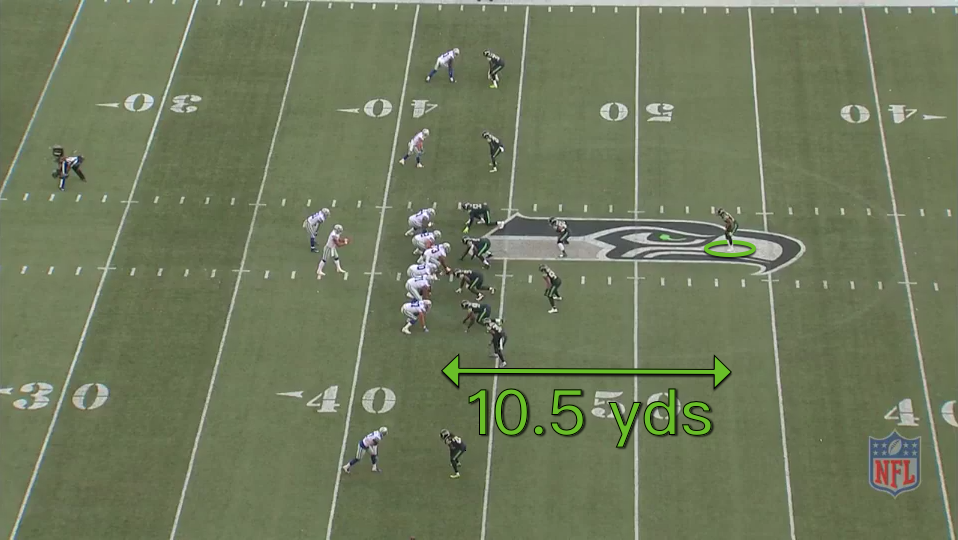 Thomas is at 12.5, the lowest mark among safeties with at least 40 snaps as a deep-lying free safety. That’s at least 2.5 yards closer to the line of scrimmage on average than most safeties in the same role and around six yards closer than the Browns’ free safeties from the same looks. It’s those extra yards of vertical alignment that allow Thomas to impact so many more plays than most players at that spot. That’s the same reason strong safeties are typically more active than free safeties, for the proximity to the line of scrimmage allows them to impact more plays, but Thomas can do this while still maintaining his range on the deep pass and protecting the top of the defense from big plays. 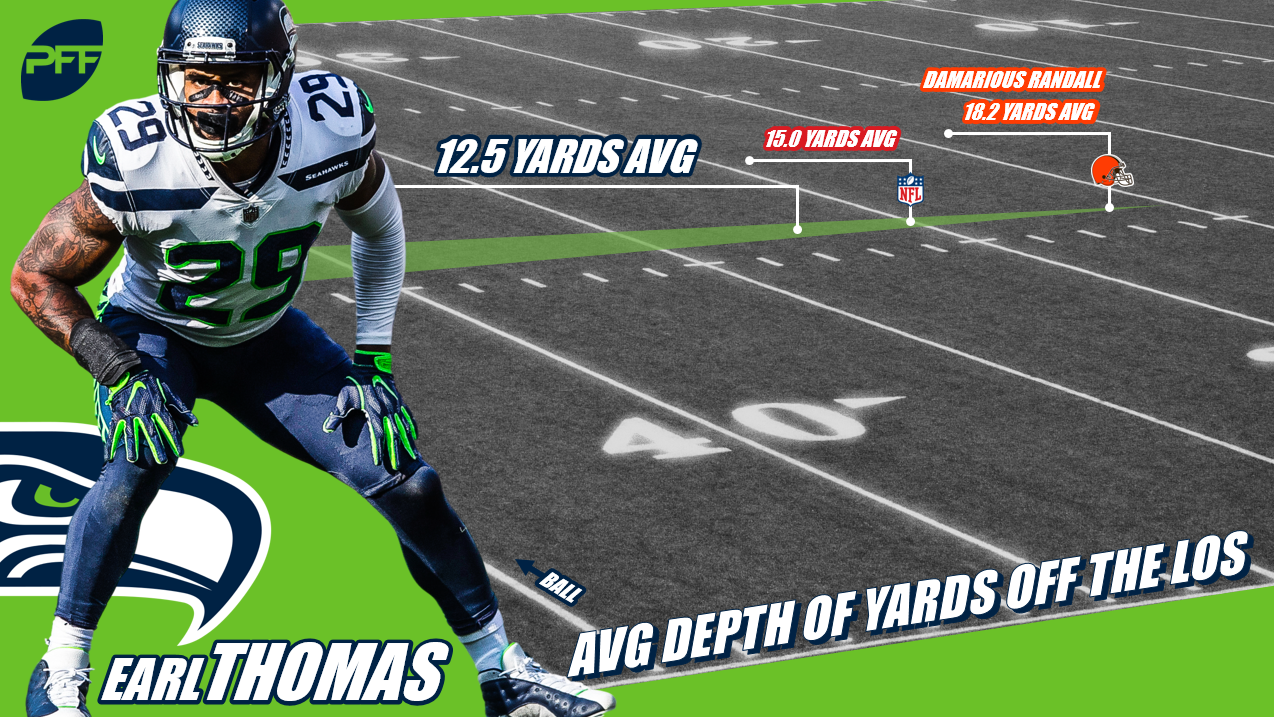 This is what makes Earl Thomas unique. There are fast safeties elsewhere in the NFL, but his all-around skill set gives him a range unparalleled by any other safety, and what that range allows a defense to do with him from a positional standpoint is what makes the difference between an imitation Seahawks defense and the genuine article if the talent levels are otherwise equal.

This comes into sharp focus as the Seahawks decide whether to trade away the player that made their defensive scheme tick, or accede to his desire for a new contract and re-invest in a 29-year-old whose range is his key attribute. The decision isn’t an easy one because there’s no telling when Father Time will come calling and a loss of a yard as age becomes a factor could render Thomas merely a normal safety. Until that point, though, he could be the missing piece for another defense in the NFL and would be the missing piece in Seattle’s should they trade him away and rebuild their own.