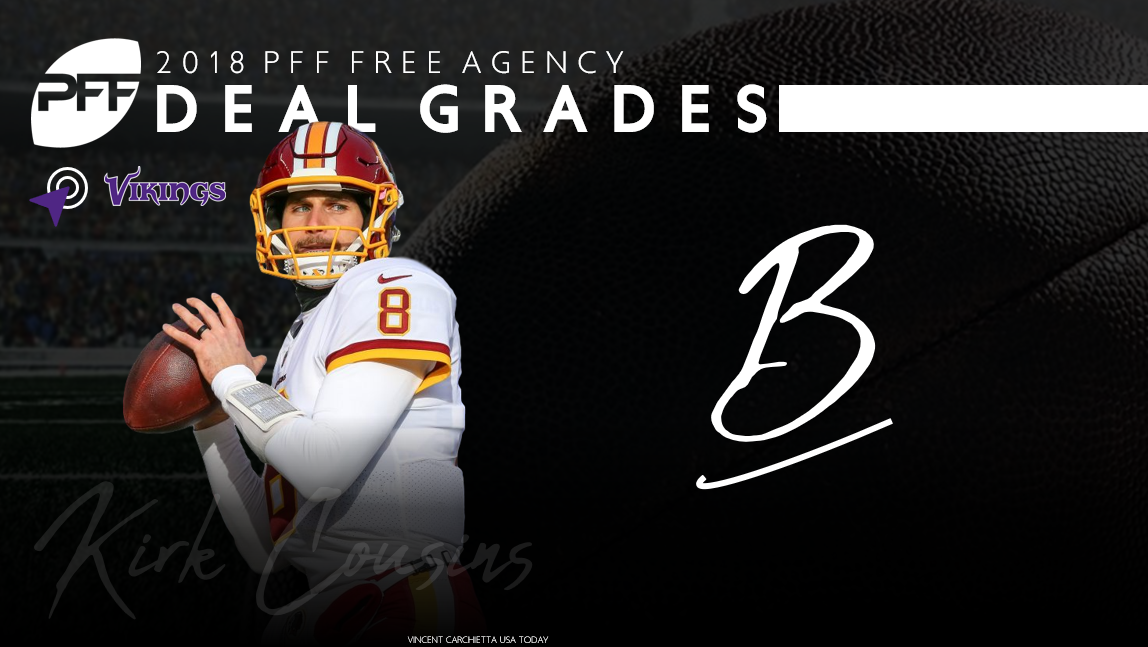 What it means for Cousins:

As the next big name at quarterback to sign a contract, QB Kirk Cousins becomes the highest-paid player in the entire league. While his 2017 play seemingly doesn’t warrant such a contract (78.7 overall grade), his 2015-2016 performance suggests he’s capable of more. Most notable was his level of play in 2016, which had him ranked inside the top-10 among quarterbacks with a grade of 85.4.

Cousins joins a superb supporting cast that features two PFF top-10 graded wide receivers in Stefon Diggs (85.4 overall grade) and Adam Thielen (84.6), a situation that is reminiscent of 2016, when he played with DeSean Jackson and Pierre Garcon. Diggs and Thielen have a habit of making their quarterback look good, with both ranking in the top six last season in contested catch rate. Cousins will also be backed by an effective run game that produced over 1,750 yards from running backs a year ago, as well as an offensive line that ranked in the top-half of the league in pass-blocking efficiency (79.3).

What it means for Minnesota:

Cousins certainly offers more of a gunslinger mentality to what has been a conservative offense from 2015-2017. With an offense that has been centered on efficiency and low-risk taking, the Vikings have got a top-four mark from their quarterback in adjusted completion percentage each of the last three seasons but have also ranked near the bottom in big-time throws. With Cousins comes more big-time-throws, as he ranked in the top 10 of quarterbacks during his highest-graded season, but he will also be willing to put the ball in harms way, as he generally ranks in the middle of the pack in turnover-worthy throw percentage.

While Minnesota has gotten very solid quarterback play over the past three seasons between Teddy Bridgewater in 2015 (82.1), Sam Bradford in 2016 (83.4), and Case Keenum in 2017 (85.3), the Cousins contract could bring an element of stability to the mix in knowing who will be at the helm for the next three seasons.