After taking Heisman-winning signal-caller Kyler Murray with the first overall pick of the 2019 NFL Draft, the Arizona Cardinals have traded quarterback Josh Rosen to the Miami Dolphins in exchange for the 62nd overall pick. Rosen performed poorly as a rookie, earning an unimpressive 49.1 grade that ranked 38th among 39 qualifying quarterbacks, but even so, there are plenty of reasons to believe that he could salvage his career and turn things around with the Dolphins – making this trade more than worth the risk.

First and foremost, the coaching situation surrounding Rosen in Arizona was less than ideal, as evidenced by the midseason firing of Offensive Coordinator Mike McCoy, along with the postseason firing of first-year Head Coach Steve Wilkes. 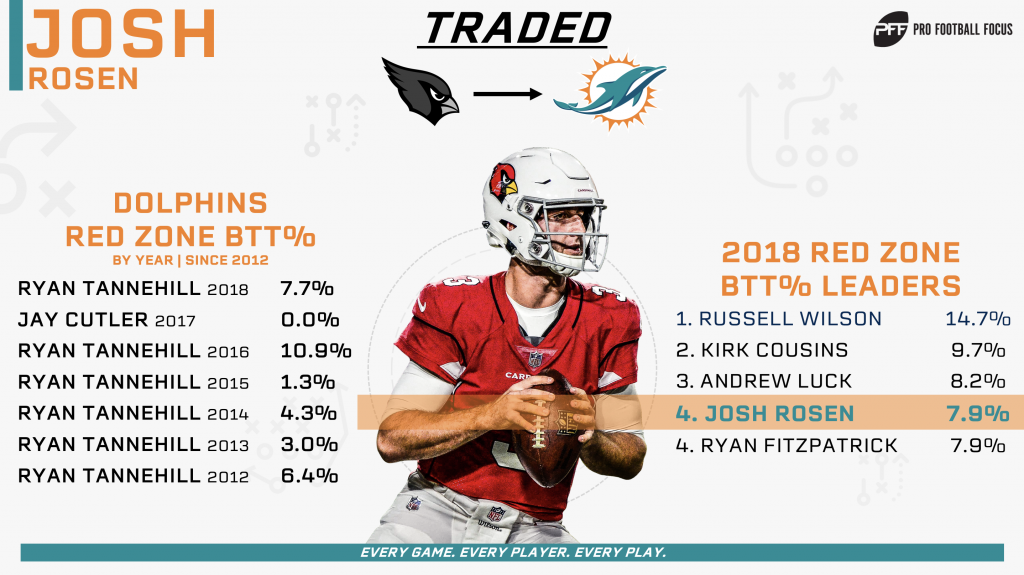 The rest of the offense didn’t do Rosen any favors either, as the entire unit finished with an overall grade of 56.5, the worst in the NFL. During his first (and last) season in Arizona, the offensive line was nearly non-existent; they produced a pass-blocking grade of 55.8 and a pass-blocking efficiency of 77.6, both of which ranked dead last among teams. All told, Rosen was under pressure on 40.4% of his dropbacks, which was the fifth-highest rate among quarterbacks, and his 2.88 second average time to sack tied for the fourth-fastest rate.

Throughout his rookie season, Rosen was under constant fire behind a porous offensive line, and that frail pass protection resulted in him being sacked in under 2.5 seconds 17 times – the most in the NFL last season. He also struggled mightily when that pressure moved him off his spot, as he generated just a 34.6 passing grade on such plays, throwing one touchdown to six interceptions. When he was kept clean, he threw for 10 touchdowns and eight interceptions — good for a 60.5 grade — suggesting he could see significant improvement with better offensive line play.

As Senior Analyst Steve Palazzolo’s noted in his synopsis of Rosen last year, Rosen was excellent throwing to the intermediate parts of the field with touch and anticipation, and during his time at UCLA, he displayed the impressive ability to throw the ball downfield accurately. Rosen backed this up in his debut season: his 7.5% big-time throw rate throwing to the intermediate parts of the field when kept clean was the ninth-highest mark among quarterbacks in 2018. On the same targets, Tannehill ranked dead last with a 0.0% big-time throw rate.

When examining Rosen’s rookie season, one can easily see all the traits that made him such an exciting prospect coming out of college. In his first start, the former Bruin produced a career-high 87.1 grade against the Seattle Seahawks, and he made a number of impressive throws, including this beautiful pass he floated to tight end Ricky Seals-Jones over Bobby Wagner – who was PFF’s highest-graded linebacker in coverage last season.

Rosen displayed his tendency for the big play and ability to accurately place the deep ball as well, turning in a big-time throw percentage that ranked 15th among 35 quarterbacks last season. He generated an adjusted completion percentage of 42.0% on his deep passes, which also ranked 15th, and he threw four deep touchdowns to two interceptions. In the play below against the San Francisco 49ers, Rosen showed his ability to uncork the deep ball with the help of solid protection by hitting fellow rookie Christian Kirk perfectly for the long touchdown.

The rookie didn’t see much action in the red zone last year, executing just 38 red-zone dropbacks, but the returns were somewhat promising. Rosen threw for seven touchdowns and zero turnover-worthy plays, producing a big-time throw percentage of 7.9% that ranked tied for fourth among qualifying quarterbacks.

An underrated part of Rosen’s game is his maneuverability, which helps him to evade pressure and use his legs to move the sticks if the opportunity presents itself. He is deceptively athletic, and while he won’t break any land speed records, he has shown that he is more than capable of punishing the defense if they fail to account for him.

The quarterback room in Miami has been inconsistent for quite some time now. Throughout the course of the PFF era (2006 – present), Miami’s three highest-graded quarterbacks have been Ryan Tannehill at 76.3, Chad Pennington at 75.7, and Chad Henne at 72.9. Now, Josh Rosen had a historically bad first year, but it’s important to examine the situation closely to understand why it’s too early to dismiss Rosen as a top quarterback prospect. His underrated athleticism, and clean-pocket and red-zone numbers suggest that Rosen is capable of being a viable starter. With the help of a fresh start, he could find himself living up to his first-round pedigree in Miami.