The Minnesota Vikings aspire to do all they can to preserve the weapons they have surrounding quarterback Kirk Cousins. As a result of that effort, they have signed tight end Kyle Rudolph to a four-year, $36 million extension, per ESPN's Adam Schefter. This deal arrives nearly two months after the 2019 NFL Draft and the acquisition of Irv Smith Jr., a former Alabama tight end.

Rudolph enjoyed arguably his best season with the Vikings in 2016 when he turned 120 targets into 83 receptions, 840 yards and seven touchdowns en route to a career-high receiving grade of 75.3. However, despite those impressive box-score stats, he still only ranked 15th among 47 qualified tight ends in overall grade (73.2). In fact, over his eight-year career, Rudolph has never finished a season inside the top 10 among tight ends; he has only earned a single-game grade of 80.0 or higher in 12 of 116 career contests, and he only has three 100-yard games in his career. 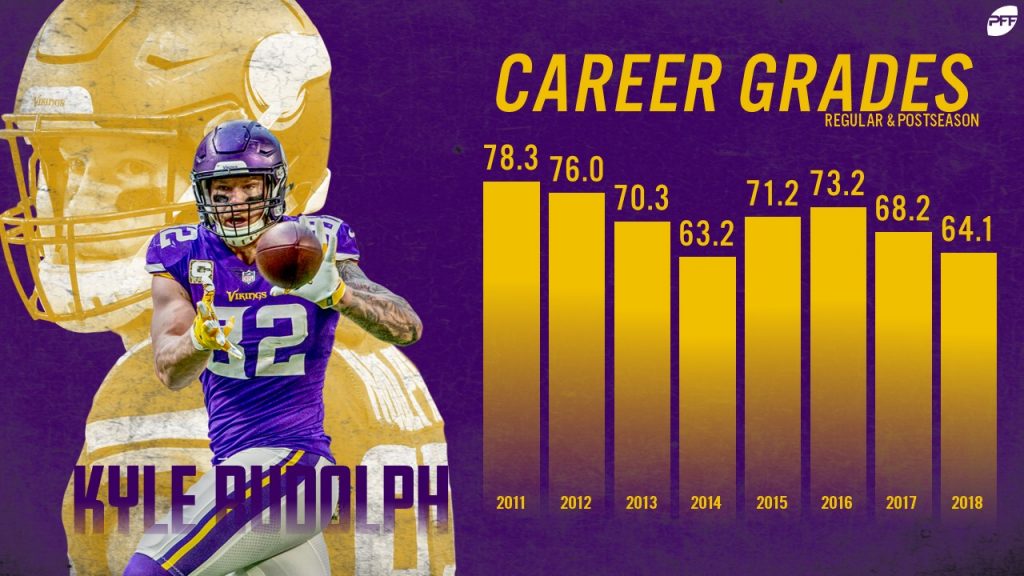 Second-round draft pick Irv Smith Jr. — the fourth tight end on PFF’s draft board — was tied for first among tight ends in this year’s draft class with 2.56 yards per route run, and he racked up 44 receptions for 707 yards and seven touchdowns on the year. He led the draft class with a 157.7 passer rating when targeted and was second in the SEC last season with 27 combined first downs and touchdowns.

Given the fact that Rudolph is closing in on the ever-alarming age of 30, Smith certainly has the potential to dip into Rudolph's snap count while Rudolph continues to make an impact in high-leverage situations — where he has thrived for the majority of his career. 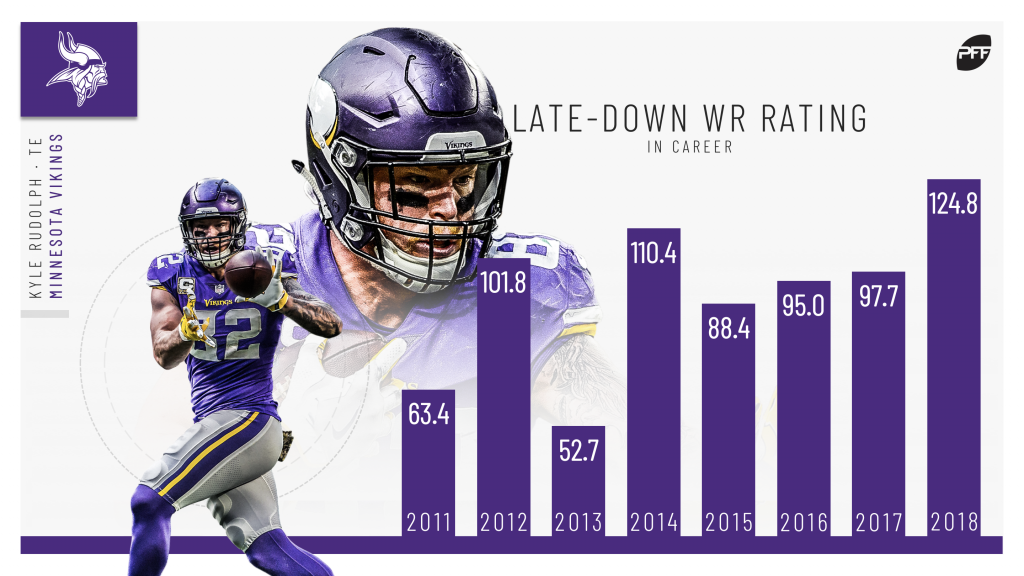 With two relatively productive tight ends now on the books, it opens up a world of possibility for the Vikings' offense and allows them to run plenty of 12 and 22 personnel — which just so happens to suit quarterback Kirk Cousins down to the ground. Since 2015, Cousins leads all quarterbacks in adjusted completion percentage (83.3%), passer rating (112.8) and yards per attempt (9.39) in those personnel packages, and his 2018 passing grade from such (90.8) ranked third among quarterbacks with at least 50 attempts last year.

Some media outlets have claimed that this move may have been prematurely executed or that various other Vikings players merited an extension first, but opposing NFL defenses should have nightmares about a Minnesota offense that can put Rudolph, Smith, Adam Thielen, Stephon Diggs, and Dalvin Cook on the field at the same time.