Cleveland Browns fans at the 2018 NFL Draft booed as they heard cornerback Denzel Ward named as the fourth overall pick, as a large majority of the fanbase was hoping to hear Bradley Chubb‘s name instead. Although Ward has been making huge strides this season and was undoubtedly the right decision for the Browns, that's not because Chubb has been a disappointment.

In fact, Chubb been quite the opposite over the first eight weeks of the season. 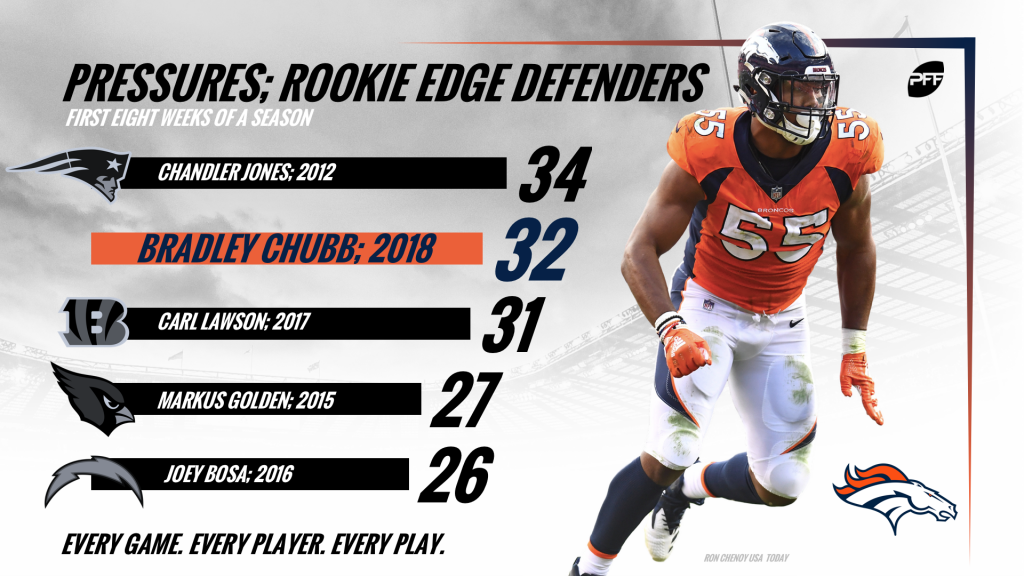 The Denver Broncos’ first-rounder currently has the second-most quarterback pressures ever recorded by a rookie edge defender over the first eight weeks of a season. He also ranks third in win rate and sixth in pressure rate among rookie edge defenders in the PFF era (2006-2018).

Chubb’s 32 QB pressures tie him for ninth among all NFL edge defenders this season, just behind Myles Garrett’s 33 and J.J. Watt’s 35. Through eight weeks, Chubb has even produced more quarterback pressures than his Denver counterpart and former Super Bowl MVP Von Miller.

The duo of Chubb and Miller are the key reason why Denver maintains a top-10 pass-rush unit in the NFL (72.0).

Among the 64 edge defenders with 150-plus pass-rush snaps through Week 8, Chubb's win rate of 17.2% ranks 13th, which puts him in the company of some of the best players in the league. His pressure rate of 15.3% ranks eighth among the same group and is ahead of notable players such as Michael Benett, Demarcus Lawrence and Watt.

The NC State alumnus has also earned a 9.6 pass-rush productivity rating, which ranks sixth among all edge defenders this year.  Although sacks aren’t the be-all-and-end-all when it comes to evaluating pass-rushing performance, Chubb is on pace to get a lot of them. His average of one sack per game in his 2018 campaign puts him on pace for 16 this season. This total would break the all-time rookie sack record set by the Titans' Jevon Kearse in 1999, as well as tower over Miller’s rookie sack total.

Chubb is no stranger to tremendous improvement year to year. He went from earning a 63.5 overall grade his freshman year at NC State to being the highest-graded edge defender in the FBS with a 90.6 grade.

If there is one area that has hurt Chubb’s overall grade of 66.0, it is his coverage and tackling ability. Although it’s a tremendously small sample size, he has surrendered a 116.7 passer rating on four targets. He has also missed four tackles compared to his 14 successful attempts. There is room for improvement in some categories, but Denver drafted him to rush the passer, and he is doing exactly that.

Although Chubb’s grade (66.0) ranks 25th among all rookie defenders in the league, he is a 22-year-old edge defender who, even though he leads all rookies in sacks, still has some of the most potential to grow. Denver’s first overall pick paired with Miller will be a force in this league for years to come.