52 observations ahead of Super Bowl LII

PFF Analyst Mark Chichester brings you observations about the two teams facing off in Super Bowl LII, the New England Patriots and the Philadelphia Eagles.

If you would like to make some observations of your own, you can do so with PFF Elite, where you can find several signature statistics for every offensive and defensive position in football.

52. The Eagles' offense has used run/pass options on 207 plays this year (including playoffs), which is more than any other team in the league.

51. New England Patriots edge defender Trey Flowers has recorded 12 quarterback pressures so far this postseason, which is second to only Cameron Jordan and Malik Jackson (13).

50. Including playoff games, Philadelphia Eagles linebacker Nigel Bradham has allowed just 0.62 yards per coverage snap this year, which is the second-best mark among linebackers. His seven pass breakups are tied with Deion Jones for the most among players at the position.

49. Since joining the Patriots prior to the 2015 season, running back Dion Lewis has forced a missed tackle on 23.5 percent of his rushing attempts, which is the highest rate among the 96 running backs with at least 100 carries in that span.

48. Through his two playoff games, Eagles running back Jay Ajayi is averaging 3.27 yards after contact per attempt, the best mark playoff among running backs with at least 15 attempts.

47. Since entering the league in 2014, Patriots cornerback Malcolm Butler has ended all three of his regular seasons with at least 10 pass breakups and at least two interceptions. Butler joins Joe Haden (2012-2014) and Tramon Williams (2010-2012) as the only cornerbacks in the PFF era (2006-present) to achieve this in three consecutive seasons.

44. During the regular season, when cornerback Ronald Darby lined up in off coverage, he allowed a passer rating of just 34.5. That was third-best behind A.J. Bouye (12.8) and Marshon Lattimore (32.8) for cornerbacks thrown at 20 or more times outside of press coverage.

43. In Super Bowl LI, Patriots running back James White saw 15 targets and racked up 110 receiving yards, both of which were the highest marks ever recorded by a running back in a Super Bowl game within the PFF era.

41. During the regular season, Patriots cornerback Stephon Gilmore was targeted 11 times in the red zone. He allowed just four catches for 28 yards and also tallied three pass breakups and one interception, giving him a playmaker index of 36.4 percent, the best mark among all players with at least 10 targets in the red zone.

40. Including playoff games, Eagles cornerback Patrick Robinson has allowed a passer rating of just 59.1 when covering the slot this year, which is the third-best mark among all cornerbacks with at least 20 targets in slot coverage.

39. Since joining the Patriots in 2013, Danny Amendola has generated a passer rating of 117.8 on his 69 postseason targets, which is the fifth-best mark among the 24 receivers with at least 50 postseason targets since 2006.

38. In his two playoff games, Eagles quarterback Nick Foles has attempted 16 pass attempts while under pressure and on those throws, he’s logged a passer rating of 147.9 and an adjusted completion percentage of 84.6 percent, both of which currently rank first among all quarterbacks with at least 10 pressured attempts in the postseason.

37. Through 17 weeks of the regular season, Patriots linebacker Kyle Van Noy produced 18 total pressures, which tied him for the fifth-most among all linebackers and the most among linebackers from the AFC.

36. At the close of the regular season, edge defender Brandon Graham’s pass-rush productivity of 11.0 was good for ninth among 68 qualified 4-3 defensive ends with at least 135 pass-rushing snaps. In the PFF era, only seven edge defenders have recorded a PRP above 10.5 in six-or-more consecutive regular seasons, and Graham is now one of them.

35. Patriots wide receiver Brandin Cooks put up 608 yards from deep passes (passes that traveled at least 20 yards in the air) this year, the second-best mark among receivers. Since he entered the league in 2014, Cooks has racked up a staggering 1,794 receiving yards from deep passes, which is second to only Julio Jones (1,796) in that span.

33. Over the last four regular seasons, no player in the NFL has a better first down conversion percentage on third and short (third and four or less) rushing attempts than quarterback Tom Brady, who has converted on 76.7 percent of his attempts. 16 of his 23 conversions have come via the quarterback sneak.

32. In this year’s playoff appearances, Eagles linebacker Mychal Kendricks has produced four stops on his 61 run-defense snaps, resulting in a run-stop percentage of 12.5 percent, which is the third-best mark among linebackers with at least 21 run-defense snaps in the postseason.

30. In his team’s conference championship victory over the Minnesota Vikings, quarterback Foles earned an ‘elite’ PFF overall grade of 92.9, which is currently the second-best grade ever recorded by an Eagles quarterback. Foles now owns three of the of top-10 Eagles quarterbacks game grades since PFF started grading games back in 2006.

29. Since joining the Patriots to start the 2016 season (including playoff games), wide receiver Chris Hogan has seen 42 of Brady’s 300 aimed late down (third and fourth down) targets, which is the fifth-most among all of Brady’s weapons, despite missing seven games this season through injury. Hogan has found the end zone on five of those targets and generated a passer rating of 138.0, both of which rank first among Patriots' skill position players over the last two seasons.

28. Throughout the regular season, the Eagles' defense combined to hit the opposing running back in the backfield on a whopping 38.6 percent of their run-defense snaps, which was the best mark among teams this season.

27. Including playoff appearances, Patriots safety Duron Harmon has only been thrown at nine times while in primary coverage, but staggeringly, he’s got his hands on seven of those passes (four interceptions and three pass breakups).

26. In the postseason so far, Eagles tight end Zach Ertz has 11 catches without dropping a pass, racked up 125 receiving yards and averaged 2.66 yards per route run, all of which are the best mark among playoff tight ends with at least five targets.

24. During the playoffs this year, Eagles cornerback Jalen Mills has allowed an average of just 0.21 yards per coverage snap. If he keeps up the pace, it will be the third-best mark ever recorded by a postseason cornerback with at least five targets. 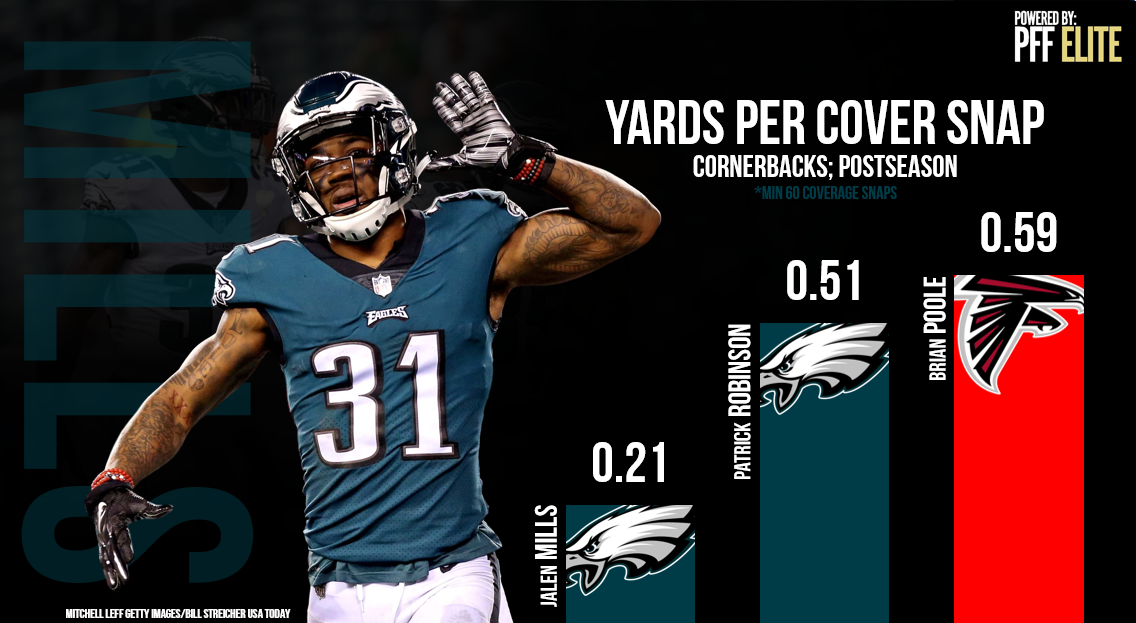 23. Including the playoffs, Patriots defensive tackle Malcom Brown has tallied a run-stop percentage of 10.8 percent this year, which ranks sixth among defensive tackles with at least 85 run-defense snaps.

21. Patriots quarterback Brady has overcome fourth quarter ties or deficits in four of his last nine playoff wins. Compared to his numbers in quarters 1:3, Brady’s fourth quarter passer rating jumps from 83.3 to 138.0, his average yards per attempt jumps from 9.9 to 11.5 and his adjusted completion percentage jumps from 74.6 percent to 80.7 percent. When tied or trailing in the fourth quarter, Brady’s offensive weapons have caught 46 targets without dropping a single pass.

20. Including playoff games, the Eagles defense has produced 311 pressures on 753 passing plays (41.3 percent), which is the best rate in the NFL.

19. Since joining the Patriots prior to Week 17, veteran edge rusher James Harrison has racked up three sacks, one hit and one hurry on his 33 pass-rushing snaps, resulting in a pass-rushing productivity of 13.6, the fifth-best mark among edge defenders in that span.

18. Eagles wide receiver Alshon Jeffery has generated a perfect passer rating of 158.3 when targeted in the postseason this year, which is the best mark among receivers with at least five targets.

17. Tight end Rob Gronkowski ended the 2017 campaign with an average of 2.40 yards per route run. Gronkowski has led all tight ends in this statistic in five of his eight professional seasons.

15. Including the playoffs, the Patriots defense has converted 21.6 percent of their pressures into sacks this year, which is the fourth-best rate among teams.

14. Including the playoffs, Eagles running back LeGarrette Blount has been charged with carrying the ball on 98 of his team’s 261 first down carries (37.5 percent), which is the highest rate among his teammates. On those carries, Blount has averaged 3.96 yards after contact per attempt and forced 25 missed tackles, the second and fifth best marks among qualifying backs on first down, respectively.

13. Since he entered the league in 2010, 58.4 percent Gronkowki’s late down targets have resulted in either a first down or a touchdown, which is the league best rate among all players with at least 200 targets in that span.

12. This postseason, edge rusher Vinny Curry has racked up 11 total pressures from 54 pass-rushing snaps, resulting in a pass-rush productivity of 15.3, which is currently the second-best mark among playoff edge-defenders. Long, his teammate, currently tops the list (16.9).

11. This year, including his playoff games, Patriots safety Patrick Chung has tallied six pass breakups, the third-most among safeties.

10. In his two playoff games so far, the Eagles’ starting left guard Stefen Wisniewski has logged a total of 64 pass-blocking snaps and is still yet to allow a pressure. Over the last 12 postseasons, 48 offensive guards have logged perfect games in pass protection (min. 30 pass-blocking snaps), while only 23 guards have logged two or more perfect games in one postseason. However, Wisniewski now belongs to a select group of just eight guards who remained perfect in pass-protection in two consecutive playoff contests, and if he continues his streak in the Super Bowl, he’ll be one of just two players at the position who have remained perfect in three consecutive playoff games, Reggie Wells (2008) being the other.

9. Through 17 weeks of the regular season, Brady led the league with a total of 2,731 passing yards in the air, which beat the next closest quarterback by a whopping 271 yards.

8. This year (including playoffs), Eagles safety Malcolm Jenkins has produced 32 total stops, which is the sixth-highest mark among safeties, and the second-best mark of his nine-year career to date.

7. So far this season, Patriots defensive tackle Lawrence Guy has accumulated 31 run stops, which ties him with teammate Malcom Brown for the fourth-most among players at the position.

6. Through 17 weeks of the regular season, Eagles tight end Ertz generated a passer rating of 120.3 when targeted in the red zone, which was the third-best rating among tight ends with at least 10 targets. His 2017 rating is also 43.4 points greater than his rating last year (76.9).

4. This season (playoffs included), edge defender Graham has produced a run-stop percentage of 12.7 percent, which good for first among edge defenders with at least 120 run-defense snaps.

3. So far this season, Gilmore has allowed a passer rating of just 36.0 on deep passes (passes of 20-plus yards downfield), which is the seventh-best mark among cornerbacks with at least 15 deep targets.

2. When kept clean from pressure this year, quarterback Foles has produced a passer rating of 107.8, which is just 2.5 points fewer than the mark Carson Wentz put up prior to tearing his ACL. 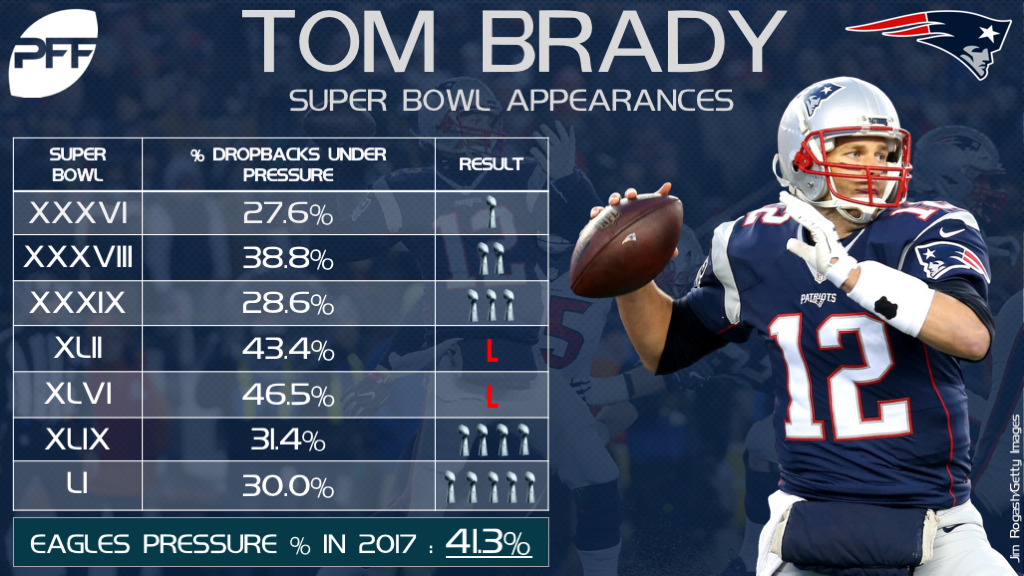