The 32 Observations series continues with Nathan Jahnke, PFF's Director of Analytics, finding an interesting piece of information about all 32 teams after 11 weeks of football. If you would like to make some observations of your own, you can do so with PFF Elite, where you can find several signature statistics for every offensive and defensive position in football, thanks to Premium Stats 2.0.

Buffalo Bills: Since Chris Ivory joined the league in 2010, he’s forced one or more missed tackles on 15.7% of his carries. That is the second-best rate among backs with 500 or more carries this decade.

Miami Dolphins: Over the last two seasons combined, Kenny Stills has the most touchdowns on crossing routes, with three.

New England Patriots: Left guard Joe Thuney has gone 641 pass blocks without allowing a sack, dating back to Week 15 of the 2017 season. That is the longest active streak for left guards.

Baltimore Ravens: Over the last two seasons, cornerback Jimmy Smith has played 56 snaps in the red zone. On those, he’s been targeted six times, allowed just one catch and tallied one interception.

Cincinnati Bengals: Dre Kirkpatrick has allowed a 42.6% catch rate this season, which is the lowest among cornerbacks. This is in part due to 11 pass breakups, which is tied for the most for cornerbacks.

Cleveland Browns: Emmanuel Ogbah has seven batted passes this season, which is the most by any defensive player.

Pittsburgh Steelers: Mike Hilton has allowed 20 or fewer receiving yards in each of his last six games. That is the longest active streak for cornerbacks this season.

Houston Texans: This past week, J.J. Watt tallied three run stops – bringing him to 247 run stops in his career. If he repeats that performance this week, he will be the 10th defensive lineman in the past 13 years to top 250 run stops. The nine other players on that list all have 2800-plus run defense snaps, while J.J. Watt has just 2132.

Indianapolis Colts: Cornerback Pierre Desir has made 51 straight tackles and assists without missing a tackle. That is the longest active streak for cornerbacks this year.

Jacksonville Jaguars: Kicker Josh Lambo has made 27 consecutive field goals of 50 yards or less. That is the longest active streak for kickers. 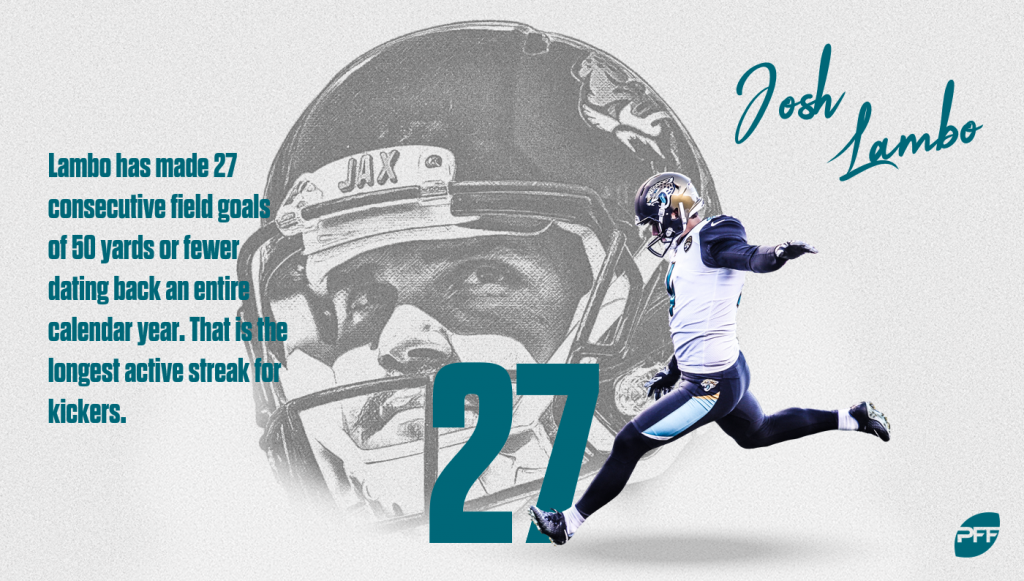 Tennessee Titans: Since being drafted in 2016, Kevin Byard leads all safeties in both interceptions (12) and pass breakups (13).

Denver Broncos: When Brandon McManus kicks off, the average starting field position for their opponents is the 22.7-yard line, which is tied for the best mark among kickers with at least 30 kickoffs. 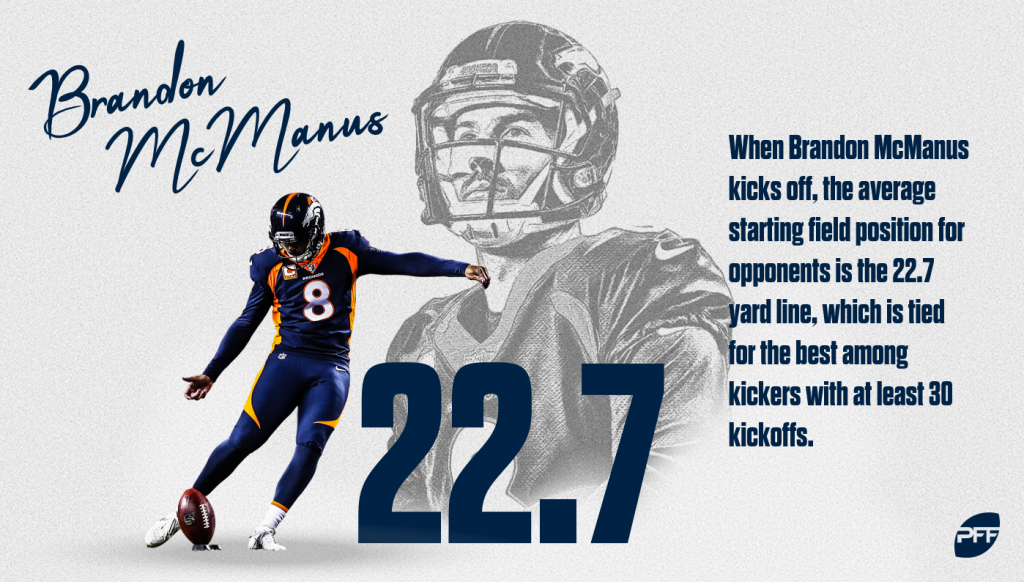 Kansas City Chiefs: Since Week 6, Dee Ford has 29 pressures, which is tied for the most for all edge defenders in that span.

Los Angeles Chargers: Rookie edge defender Uchenna Nwosu has produced pressure on 20.8% of his pass rushes, which is the highest rate for all edge defenders with at least 100 pass-rushing snaps.

Oakland Raiders: Tahir Whitehead has 16 run stops since Week 6, which is tied for the most for off the ball linebackers.

Dallas Cowboys: Demarcus Lawrence is the only player with three or more pressures in each of his team’s games this season.

New York Giants: When Odell Beckham Jr. lines up out wide rather than the slot, he’s forced 15 missed tackles on his catches. That is the most for any wide receiver this year and tied for the fifth-most for any receiver in a regular season this decade. He only needs eight more to tie the most, a record that was set by Odell Beckham Jr. in 2016.

Philadelphia Eagles: Over the last three regular seasons, Brandon Graham has 188 pressures, which is third-most for all edge defenders.

Washington: When Chase Roullier lines up at center – which he’s done the last five games – he’s allowed pressure on 1.45% of his pass-block snaps, which is second-best for all centers.

Chicago Bears: Eddie Goldman has a run stop percentage of 13.6% which is second-best for all interior defenders.

Detroit Lions: Over the last two seasons combined, Marvin Jones Jr. has 333 yards on ‘go' routes, which is the third-most for all wide receivers.

Green Bay Packers: When Kenny Clark lines up at nose tackle, he has 16 pressures, which is tied for the most for all players at the position.

Minnesota Vikings: Since Harrison Smith was drafted in 2012, he is one of two safeties with 20 or more interceptions and 60 or more defensive stops. Earl Thomas is the only other safety to achieve this.

Atlanta Falcons: Wes Schweitzer has gone 157 pass blocks without allowing a pressure, which is the longest active streak among guards. He hasn’t allowed a pressure in each of the last three games.

Carolina Panthers: Over the last five seasons, Kawann Short has 172 pressures when lined up on the defense's right side. That is the second-most for interior defenders in that time.

New Orleans Saints: Over the last two seasons combined, Demario Davis has 42 stops in coverage, which is the most for all linebackers in that time.

Tampa Bay Buccaneers: Since Week 6, Adam Humphries has 219 yards after the catch which is the second-most for all wide receivers.

Arizona Cardinals: Over the first five games, Mike Iupati was allowing over three pressures per game. Since then, he has only allowed one pressure in his last three games. His 1.25% pressure allowed rate since Week 6 is the third-lowest for left guards with at least 75 pass blocks.

Los Angeles Rams: Todd Gurley has had 90 carries of five or more yards this season, which is 25 more than any other back. 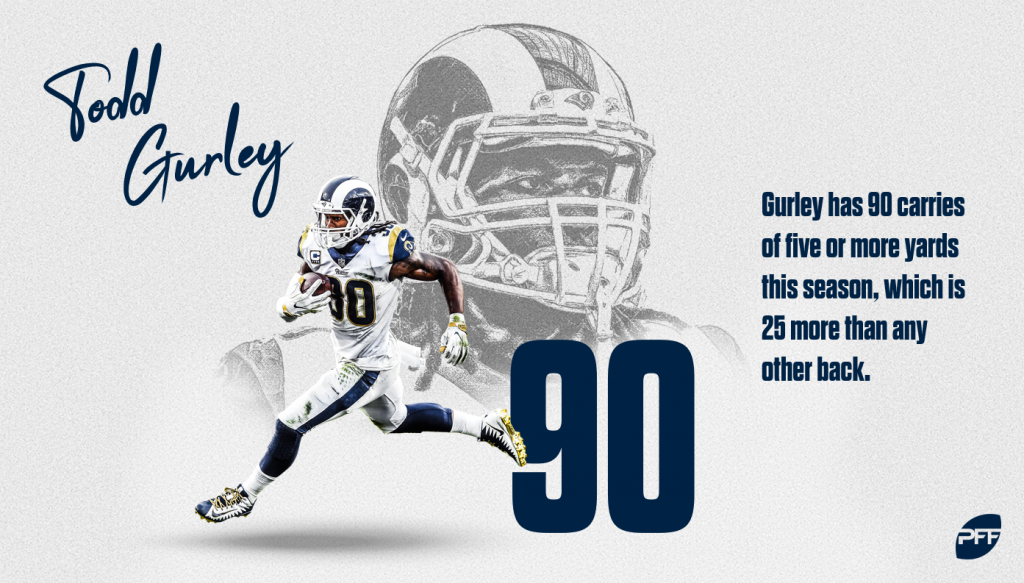 San Francisco 49ers: Over the last two seasons combined, Richard Sherman is the only cornerback to be targeted on less than 10% of his coverage snaps. He has been thrown at 66 times on 691 coverage snaps since the start of the 2017 season. 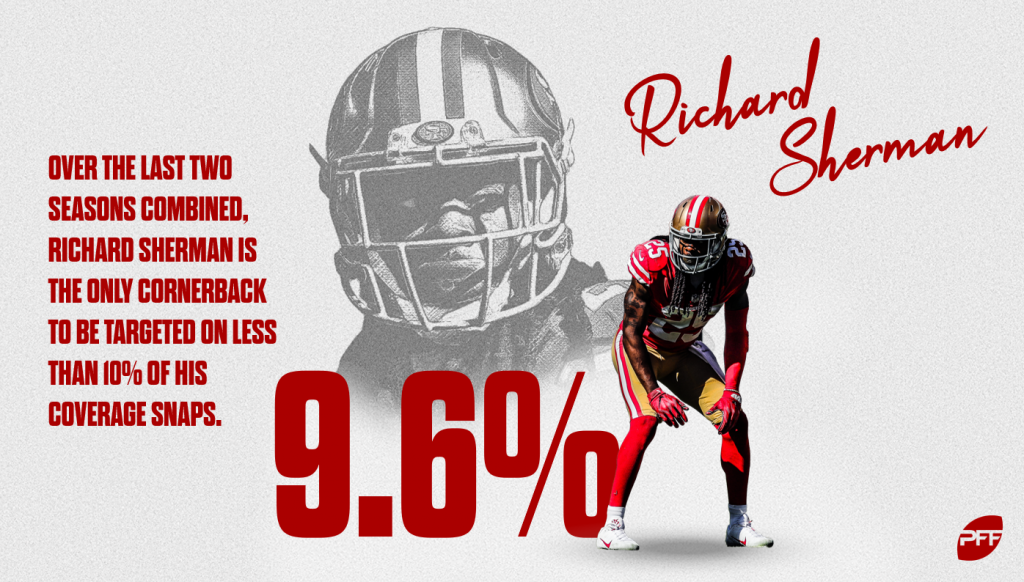 Seattle Seahawks: Since Doug Baldwin was drafted in 2011, he has accumulated 1352 receiving yards from deep passes from the slot. He is the only receiver in that span to record over 1000 deep yards from the slot.