Week 8 of the NFL season has officially closed, and with it, our weekly PFFELO rankings, looking ahead to Week 9. Like all ELO systems, PFFELO is an iterative system that updates each team’s rating after each game based on two things: how well they played against their opponent and how well they were expected to play against their opponent. The PFFELO rating system measures the former using our unique offensive, defensive and special teams grades, while the latter is determined by the PFFELO ratings leading up to the game and where the game is played.

Sometimes in football the best team does not win, and PFFELO accounts for these oddities by using our grades.  Hence there will be teams rated higher or lower in this system than their win-loss record would suggest.

Despite losing Dont’a Hightower (45.9) for the season during the week, New England allowed fewer than 20 points for their fourth-consecutive game. It hasn’t been pretty (they’re 27th, 31st and 26th in run defense, pass rushing and pass coverage grades so far, respectively), but if the Patriots defense can continue to improve each week, it’s going to be hard for other teams to keep up with Tom Brady (92.7) and Co. on the other side of the ball. He faced pressure on 21 of his 50 dropbacks against a stout Chargers defense (and completed just 50 percent of passes on such dropbacks), but was still able to put up 333 yards and a touchdown on 7.1 yards per attempt to give the Pats their fourth-straight win.

The Chiefs got back on track Monday night against the Broncos by playing a game very characteristic of the pre-2017 Andy Reid era. Marcus Peters (84.3) forced two turnovers (one for a touchdown), while the defense allowed only 198 passing yards on 41 Trevor Siemian dropbacks, three of which resulted in interceptions. Travis Kelce generated 133 receiving yards (50 after the catch), while kicker Harrison Butker nailed five field goals in as many tries against Denver as well. Their run defense (30th in PFF grades) is a concern, but their remaining slate is favorable in terms of opposing running games, so look for the Chiefs to glide to a division title relatively quickly here in the second half.

Whew!  The NFC’s best team got better Tuesday by acquiring 2016 PFF All Pro Jay Ajayi. While LeGarrette Blount (72.7) has been pretty good so far this season, Ajayi was running behind one of the worst offensive lines in football (30th in run blocking grades) and still earning 2.8 yards after contact per carry. If Alshon Jeffery (to whom Carson Wentz has an 89.4 passer rating on his throws) can improve his play, the combination of he, Blount, Ayaji and tight end Zach Ertz give Wentz one of the best supporting casts going right now.  Look out for the Eagles.

We received much scorn for having Pittsburgh in our top 10 after they came out of the gate sluggish. After three-consecutive wins (and four wins in five tries), the Steelers would be the top seed in the AFC would the season were to end today. It wasn’t pretty in Detroit, but their defense stiffened in the red zone numerous times, and has allowed only a 74.4 passer rating through the season’s first eight games. With an offense that appears to be finding its stride, and a schedule that is fairly easy moving forward, Pittsburgh (like Kansas City) looks to have a clear path towards a division title and possibly a first-round bye in what is becoming more of a clearer picture in the AFC.

Having yet to play an NFC South team (after having played all of what has been a plucky AFC East), the Falcons are 4-3 with our second-highest graded offense and our ninth-highest graded defense through eight weeks. With the Panthers and Saints playing well so far, it doesn’t get a whole lot easier from here, but they have the horses to compete. Nine of their 11 defensive starters have PFF player grades above 73.4, while Mohamed Sanu (80.5) has played very well recently to go along with Matt Ryan (82.1), Devonta Freeman (90.3), Julio Jones (87.8) and Alex Mack (86.9) on the offensive side of the ball. It wasn’t until they reached a record of 7-5 did the 2016 Atlanta Falcons hit their stride last season, so there’s plenty of time for goals to be realized in 2017.

It appears Ezekiel Elliott is indeed suspended for this week, leaving a void in an offense for which he’s generated over 50 rushing yards after contact and over 80 rushing yards in six consecutive games. His efficiency has been down, averaging 4.2 yards per carry in 2017 (2.6 after contact) compared to 5.1 in 2016 (3.0), despite an offense grading out as fourth in the league in run blocking (they were third last season), so it’s fair to question how big the drop will be. Ultimately (as we’ve said before), Dallas’ fate will be determined by the play of Dak Prescott, who’s the league’s 13th-highest graded quarterback through eight games. He might be asked to do more with his legs in Zeke’s absence, and he’s been even efficient there (7.3 yards per carry, three touchdowns) than he was last season (5.0, six touchdowns).

Leveraging our sixth-highest rated defense, the Bills are getting career seasons from Micah Hyde (88.7), Jordan Poyer (87.7), and Jerry Hughes (87.5), while seeing immediate returns on their top pick, Tre’davious White (88.9). They’re also getting plus play from the kicking game, with Stephen Hauschka third among kickers in field goal/extra point grades. With those in place, the solid play Tyrod Taylor (84.7) has given them the last two-plus seasons is finally being appreciated. Throw in the acquisition of WR Kelvin Benjamin to help Taylor, and offense may see a big jump in production.

Every time you want to want to count the Panthers out, they play a game like they did on the road in Tampa in Week 8. Going into the week with only the 26th-most efficient pass-blocking offensive line, the Panthers surrendered pressure on only six of Cam Newton’s 34 dropbacks against the Bucs. Weirdly, Newton was only able to muster a 64.1 passer rating when kept clean, completing only two passes traveling more than 10 yards all day. If Carolina’s defense (rated only 16th by us despite allowing only 17.8 points per game) regresses in the season’s second half, it’s very questionable as to whether their offense will be able to produce requisite of a contender in the NFC, especially with the trade of Kelvin Benjamin as the trade deadline came.

As we all likely expected going into the season, the Seahawks are again atop the NFC West, with a record of 5-2 through seven games. All those facts were in doubt in the waning moments against an upstart Houston team, however, as their defense surrendered a season-high 509 total yards. Luckily, Russell Wilson was up to the task, throwing for 452 yards himself (with 202 coming on passes traveling more than 20 yards downfield). He gets some help with the trade deadline acquisition of Duane Brown, replacing the league’s lowest-graded tackle with one of the premiere tackles in football. If the trio of Doug Baldwin (85.6), Tyler Lockett (79.2) and Paul Richardson (80.4) continue their strong play on the outside, we may see offensive football from Seattle at a level we haven’t witnessed in the Pete Carroll era – making the Seahawks one of the league’s most dangerous teams.

The Saints make their first appearance in the PFFELO top 10 after five consecutive wins (and covers). Their offense has been great, as usual, earning the fifth-best rating in our system. However, their defense has emerged as a bona fide force, boasting one of the league’s best young (and overall) cornerbacks in Marshon Lattimore. Lattimore (94.1) has the best PFF player grade among cornerbacks, while allowing the fifth-fewest yards per coverage snap (0.56) and the second-best passer rating into his coverage (33.3). If the Saints defense (having risen to 11th in our rating system through eight weeks) can continue their improved play, the Saints are a legitimate Super Bowl contender in the NFC. 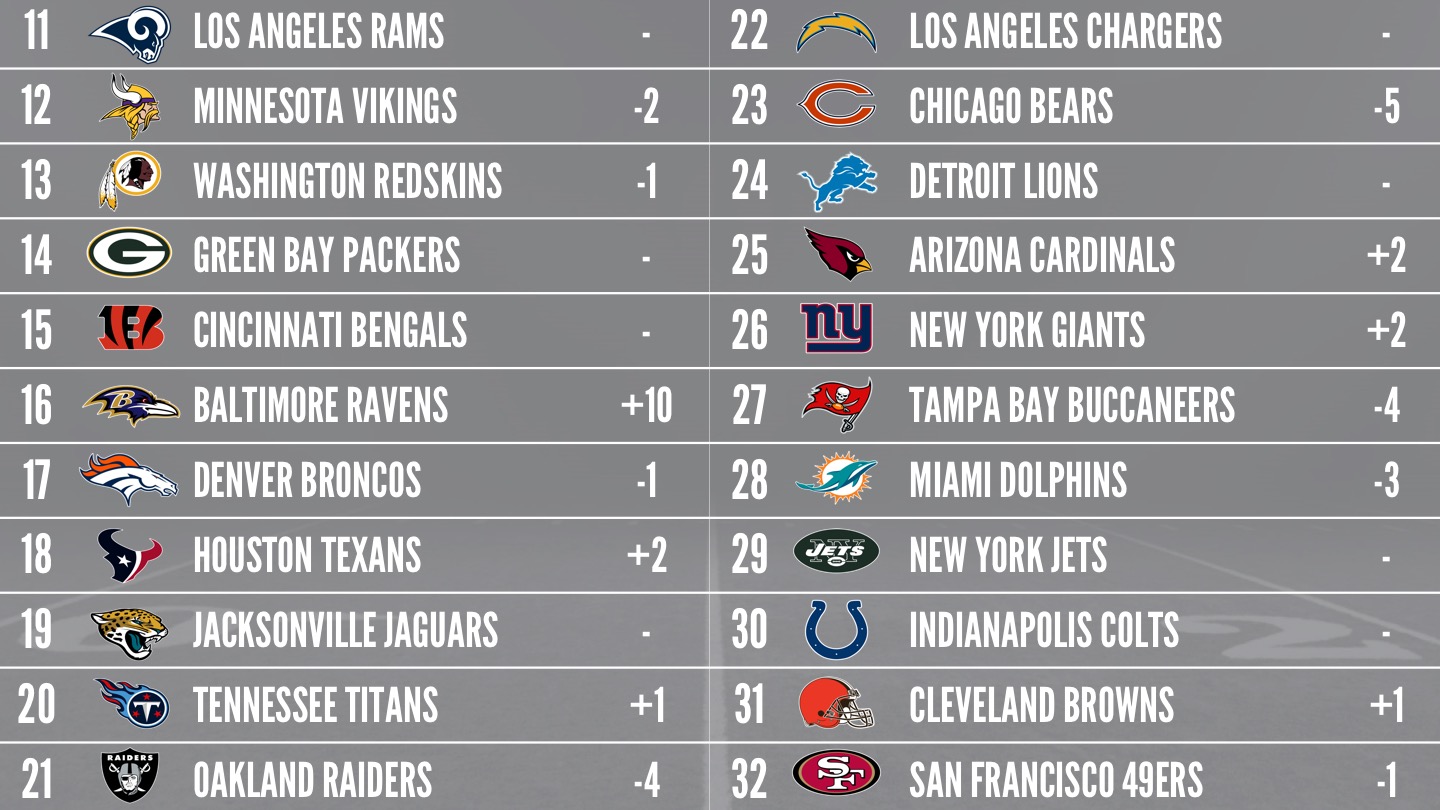