Former Kansas City Chiefs offensive coordinator has now taken the reigns at head coach for the Chicago Bears, and that could shift their path towards the 2018 NFL Draft. Nagy's offensive system will be looking for different personnel in certain areas and building around young, second-year quarterback Mitchell Trubisky. There are spots around Trubisky that Nagy and Co. could decide to build around, including bolstering their offensive line as they addressed pass-catchers in free agency by signing Allen Robinson and move tight end Trey Burton. Another wide receiver is not off the table as NFL teams cannot have enough depth at the position.

The Bears last two drafts have largely tilted towards one side of the ball, including selecting offensive players with four of their five picks last year and six of their nine players on defense in 2016. General manager Ryan Pace showed last season that he's not afraid to move aggressively to trade up for their guys, yet with five draft picks this year, that seems less likely. There is a penchant on small school players in Chicago as well so don't rule out a lesser-known prospect as they've selected players from Ashland, North Carolina A&T, Kutztown, Northern Iowa and William & Mary in the past two drafts. In total, 20 percent of their draft picks since 2013 have come from FCS teams, or lower.

Using our Wins Above Replacement (WAR – roughly the number of wins a team gets from replacing an off-the-street player with the player of interest) metric as a model, Trubisky quietly worked his way to a positive WAR, and actually sported a >1.0 WAR last season. Charles Leno has trended up, after three seasons with less than 0.0 and put forth nearly 0.3 positive WAR last season. 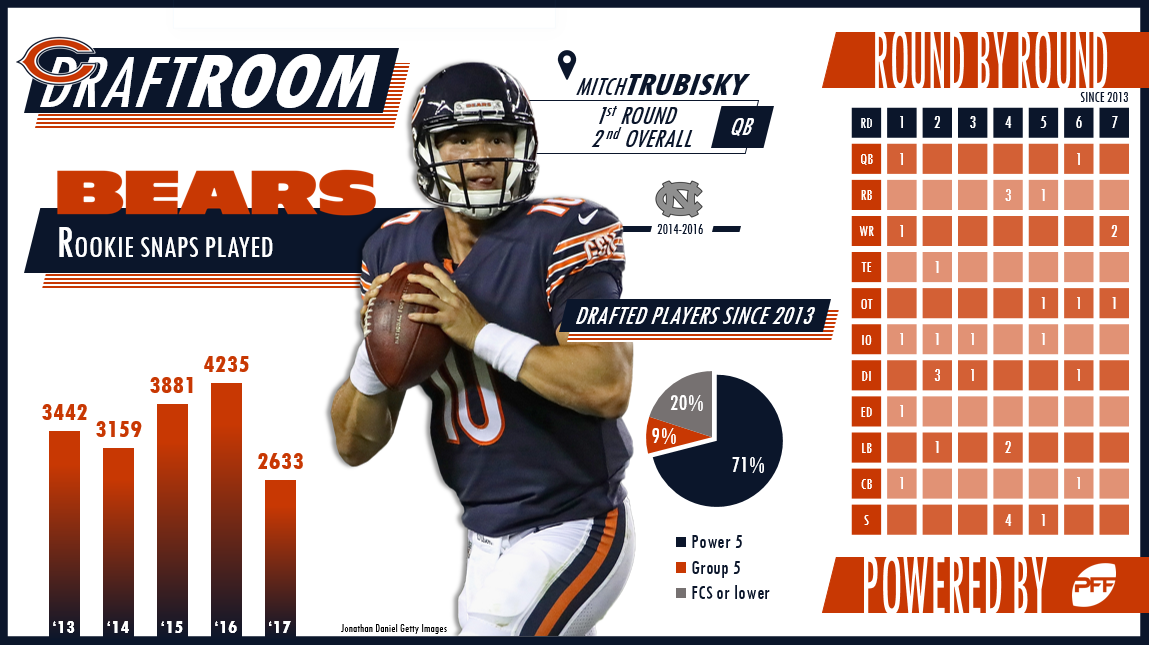 Overall WAR of drafted players for the Bears: 22nd

Played decently as a rookie at the league’s most-important position, earning a 75.7 PFF grade.

Led all running backs in breakaway percentage as a rookie (50.3).

Has started from Day 1 and earned the second-highest PFF grade among safeties in 2017.

Earned a 77.1 PFF grade as a rookie, should team with Amos to make a great duo for years to come.

PFF grade has dropped each of the past four seasons, but he has been a solid player up front for the Bears.

Has graded below a 60.0 in three of his five NFL seasons, including his first two as a Bear.

Has just two pressures and 12 stops in 356 career snaps.

General manager Bob Quinn will have his first draft with new head coach Matt Patricia this season as the latter heads to the Detroit Lions after his stint as defensive coordinator in New England. The Lions, under Quinn, have historically placed an emphasis on awareness and players who were leaders on their respective college teams while also putting value on instinctive players across the board.

Under Patricia at head coach, there will, in all likelihood, be a shift in defensive structure and prowess after he led the Patriots defense since 2012. Quinn has liked previously to mesh the best player available with a team need. There are several needs at this point for the Lions, even after free agency, as they could still used help along the defensive front-seven as well as additional depth behind Darius Slay at cornerback. They have taken an equal amount (12 percent) of draft picks from either Group of 5 FBS teams, or from the FCS level or lower since 2013.

Using our Wins Above Replacement (WAR – roughly the number of wins a team gets from replacing an off-the-street player with the player of interest) metric as a model, Riddick's receiving prowess has pushed him to positive WAR values for the Lions while former TE Eric Ebron, Jarrad Davis and Laken Tomlinson have all put forth negative WAR values (3-of-5 first-rounders for DET). 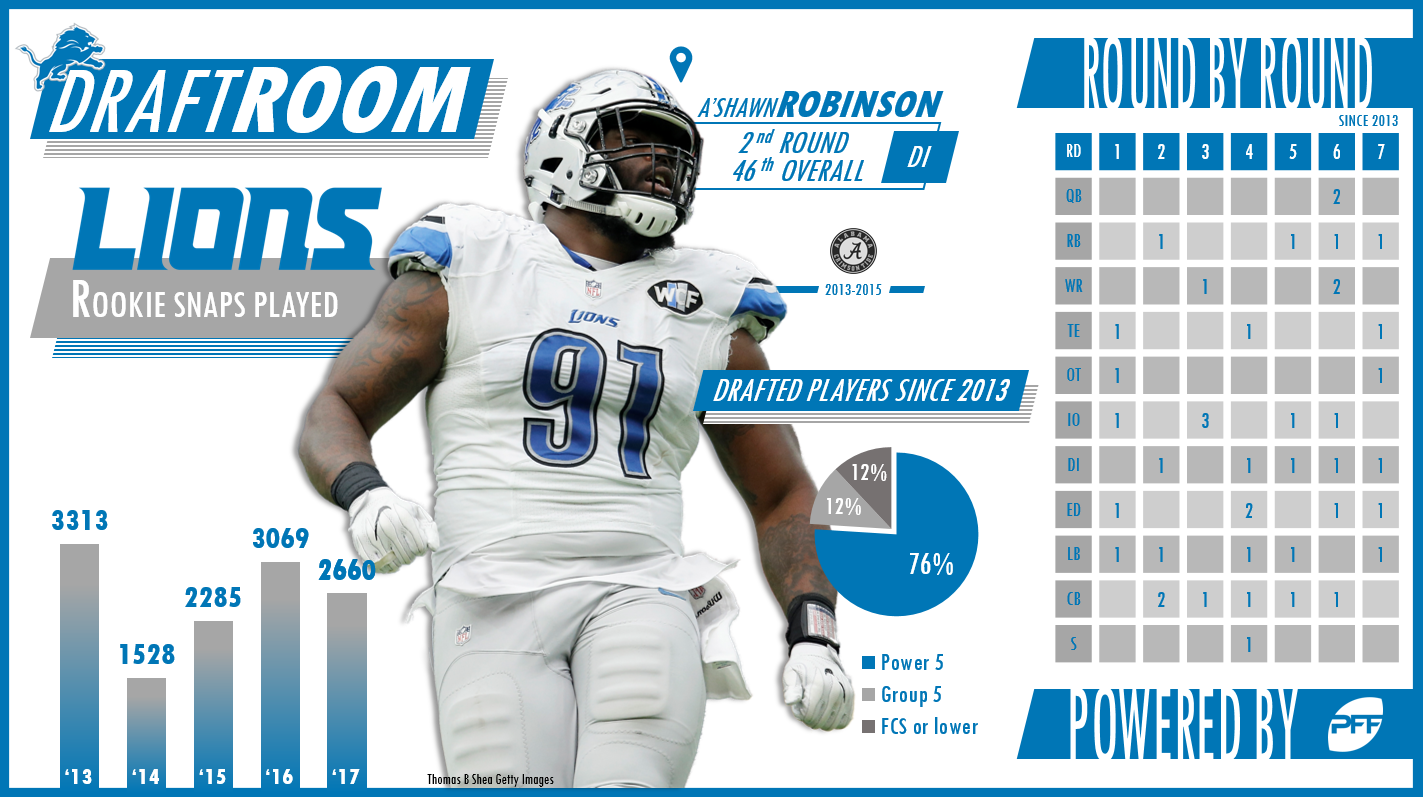 Overall WAR of drafted players for the Lions: 14th

Has forced 73 missed tackles on receptions the last three seasons.

Allowed just a 55.6 passer rating into his coverage in 2017, breaking up 13 passes and intercepting eight balls in the process.

Before leaving for the Saints via free agency, Warford earned a PFF grade above 80.0 in three of his first four seasons.

Has been a consistent performer since being a first-round pick in 2013, generating a PFF grade above 75.0 in each of his five seasons.

Was shown the door after grading below a 50.0 each of his first two seasons.

Was released after the 2017 season, despite improving into the 13th-highest-graded tight end in 2017.

Despite front office turnaround for the Green Bay Packers, they shouldn't see much of a shift in draft strategy as new general manager Brian Gutekunst has been with the franchise for 20 years. The Packers have continually drafted players with the idea of ‘draft and develop' (most famously Aaron Rodgers) at the forefront, but this offseason has seemingly felt different. They've moved in free agency, bringing in veteran players who can perform at high levels, including TE Jimmy Graham.

There are needs across the offensive line for the Packers while they could also use a talent-infusion in the secondary for a unit that ranked 30th by PFF grades a season ago. Using our Wins Above Replacement (WAR – roughly the number of wins a team gets from replacing an off-the-street player with the player of interest) metric as a model, more than half (21-of-40) Green Bay's selections since 2013 have put forth WAR values less than 0.0. However, Ha Ha Clinton-Dix and Kenny Clark have been plus-players as first-round picks. 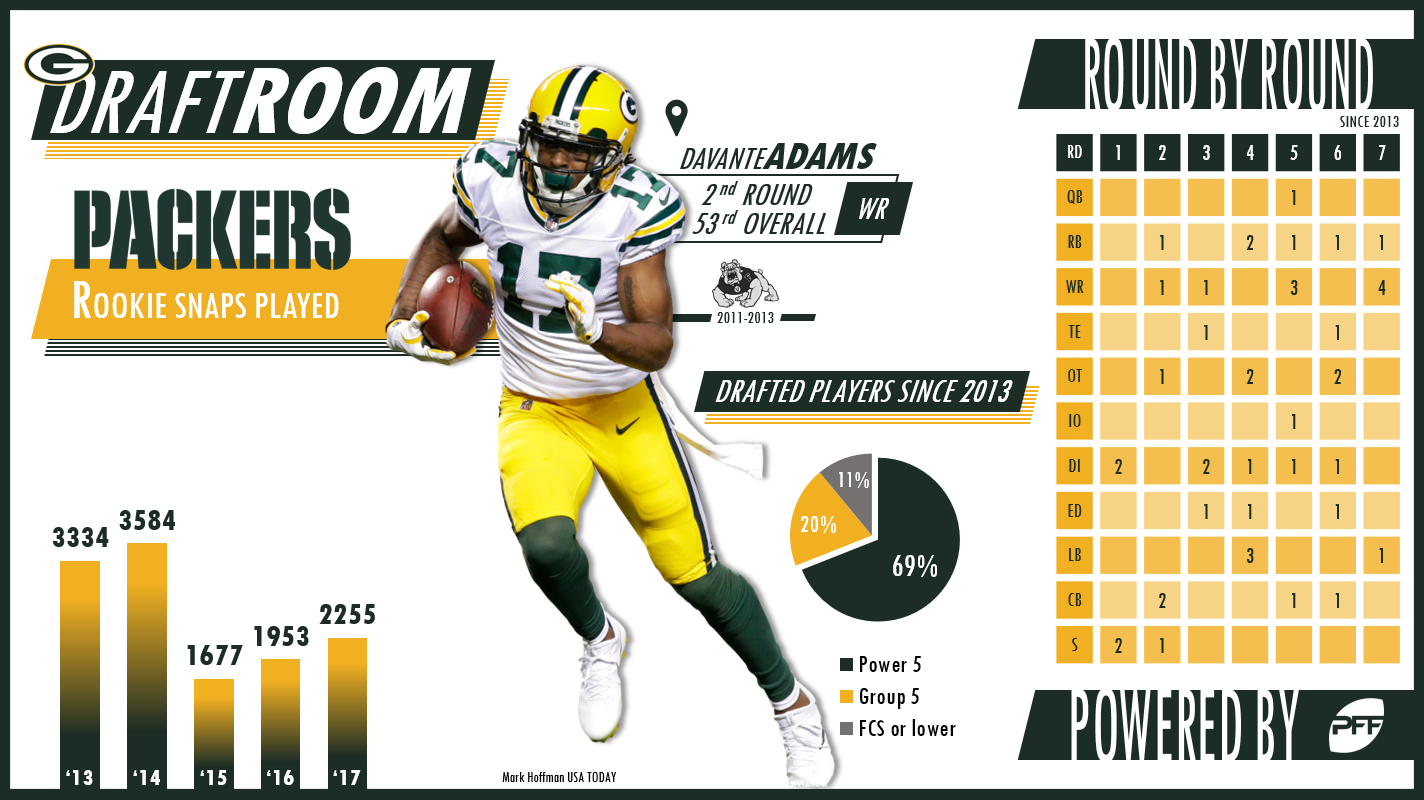 Overall WAR of drafted players for the Packers: 17th

The 2014 first-round pick has intercepted 14 passes and broken up another nine on just 123 passes into his coverage since joining the NFL.

Before leaving for (and thriving in) Buffalo, Hyde was a plus role player for the Packers, generating 64 stops, 20 pressures, 16 pass breakups and nine interceptions.

Montgomery averaged 4.4 yards after contact in 2016, leading all running backs.

Palmer struggled mightily when thrust into action in 2015, earning a 35.3 PFF grade.

Played below-replacement-level in his stint as a starter after Aaron Rodgers’ injury in 2017.

Had just one season with a PFF grade above 50.0. Left for Philly this offseason.

Hasn’t earned a PFF grade above 50.0 through two years.

A season ago, Minnesota Vikings general manager Rick Spielman expressed the team's emphasis on improving their run game, and made it so by drafting RB Dalvin Cook and C Pat Elflein with their first two picks. This season will be much of a wild card after the Vikings came within a game of the Super Bowl, with all three of their signal-callers on roster now gone. QB Kirk Cousins enters the fold at the league's most important position, joining one of the league's best supporting casts.

Adam Thielen (84.6 PFF grade) and Stefon Diggs (85.4) should benefit from a renewed running game with the return of Cook in 2018 and Cousins adding stability at quarterback. The Vikings have a glaring need at tackle this draft, as no player on roster a season ago graded out above a 70.0. Overall, the Vikings look strong to head to another lengthy playoff run as they put forth positive, plus-grades in nearly every facet last year.

Minnesota looks at Power-5 schools heavily, at least in recent drafts, including five ACC selections and four Big-10 selections in last year's draft. Using our Wins Above Replacement (WAR – roughly the number of wins a team gets from replacing an off-the-street player with the player of interest) metric as a model, both Teddy Bridgewater and Sharrif Floyd were both plus-players in terms of WAR, but had their Minnesota careers cut short. On the opposite end of that spectrum, T.J. Clemmings has cost the Vikings a total of 1.5 WAR since his drafting. 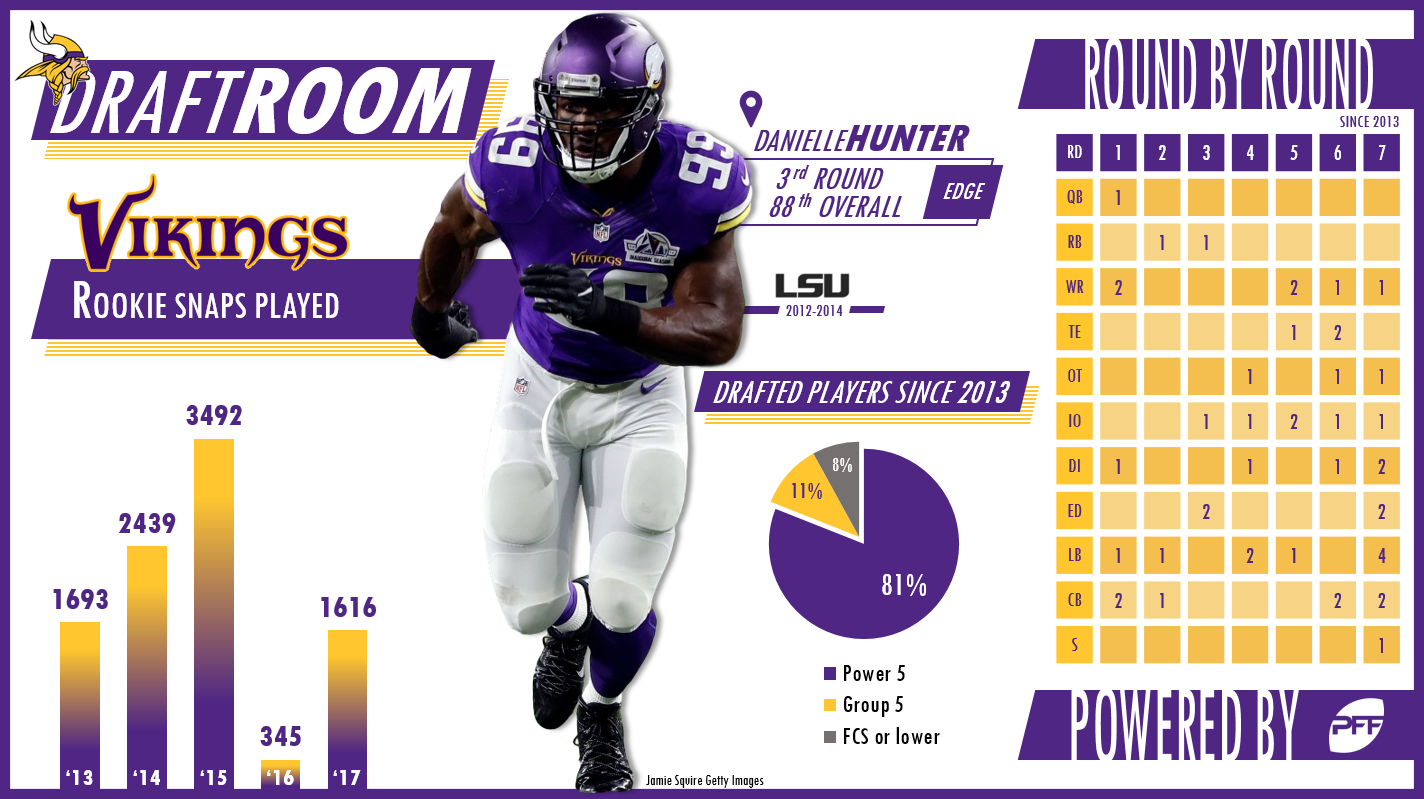 Overall WAR of drafted players for the Vikings: 3rd

Asteal of the 2015 NFL draft.  Diggs has averaged 1.78 yards per route run despite playing with three starting quarterbacks in three seasons.

Struggled at times early in his career, but is now a bona fide star at the position, surrendering a passer rating under 80 in four of his five seasons.

Up-and-down career ended on up in Minnesota, where he finished the 2017 season in the top-ten among running backs in PFF grades.

While he was not a productive pass rusher in college, Hunter has turned a corner in Minnesota, earning 27 sacks, 19 hits and 114 hurries in three seasons.

One of the least-valuable players in the NFL during his two seasons as a starter with the Vikings in terms of WAR.

Struggled a season ago with a schedule featuring some of the best interior players in the league. Finished with a 43.2 PFF grade.

One of the least-productive first-round receivers in recent memory.  Treadwell has averaged a paltry 0.55 yards per route run through two seasons.

Failed to beat out 39-year-old Terence Newman for the starting nickel role in 2017.