• BET Titans RB Derrick Henry U 83.5 rush yards vs. Raiders (-115 BetMGM): Henry is minus-22 Rushing Yards Over Expected so far this season.

Rushing yards can be misleading, as it’s a lot harder to get one yard on 3rd-and-2 than it is to get five yards on 3rd-and-15. This is where rushing yards over expected (RYOE), built using PFF charting data, can come into play. RYOE adjusts for game situation, how well the offensive line blocked and how well the defense is at defending the run. Both expected yards and rushing yards over expected can be useful when looking at RB prop bets, as we can see which running backs are being put in advantageous spots to run and which are getting a majority of the carries on their team due to being the better rusher. 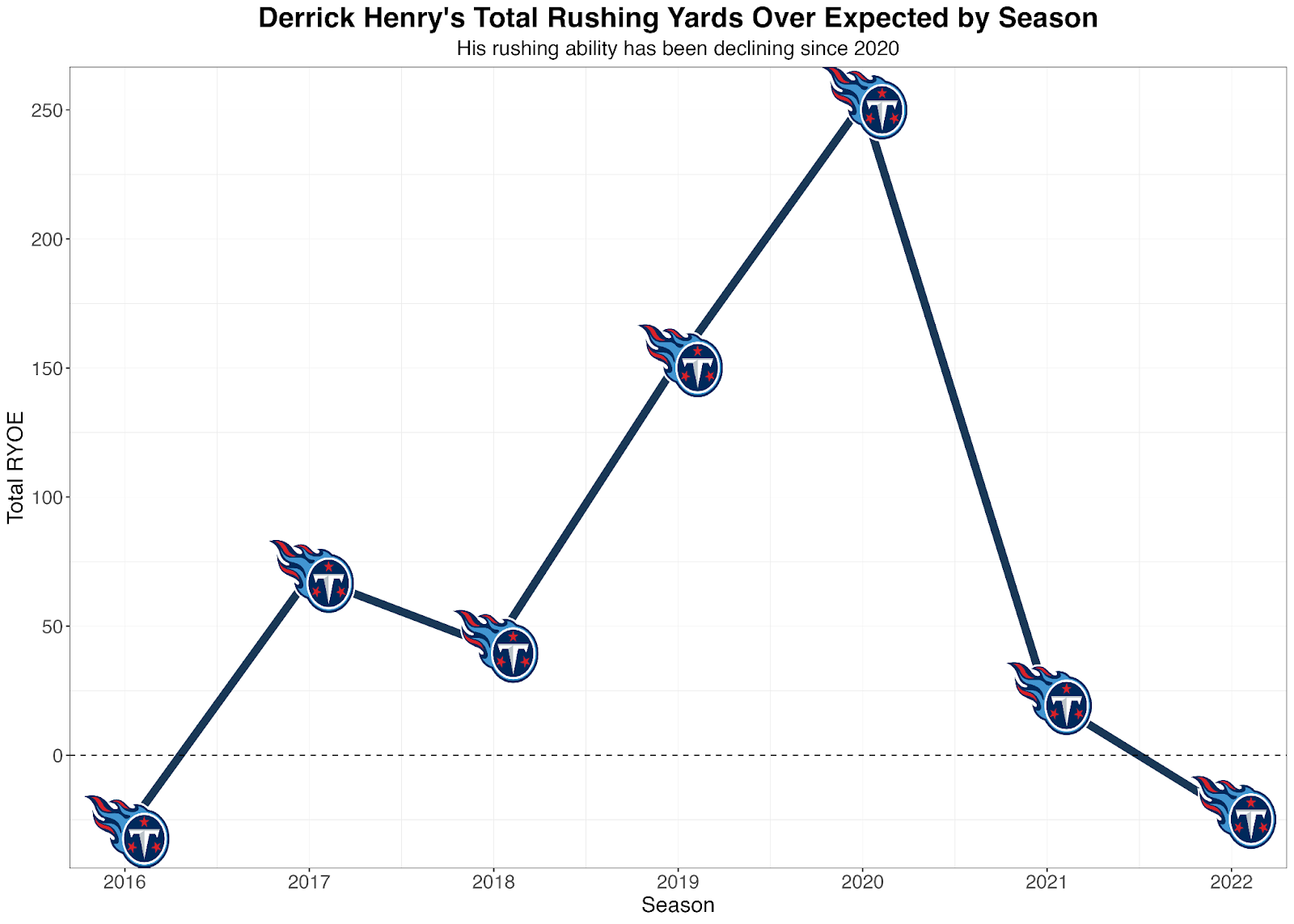 • Recently History not Kind to Henry bettors: In his past five games, Henry has rushed for 86, 68, 62, 82 and 25 yards, respectively, meaning that he has only gone over one time and has a median rushing-yard average of 68 in that span. 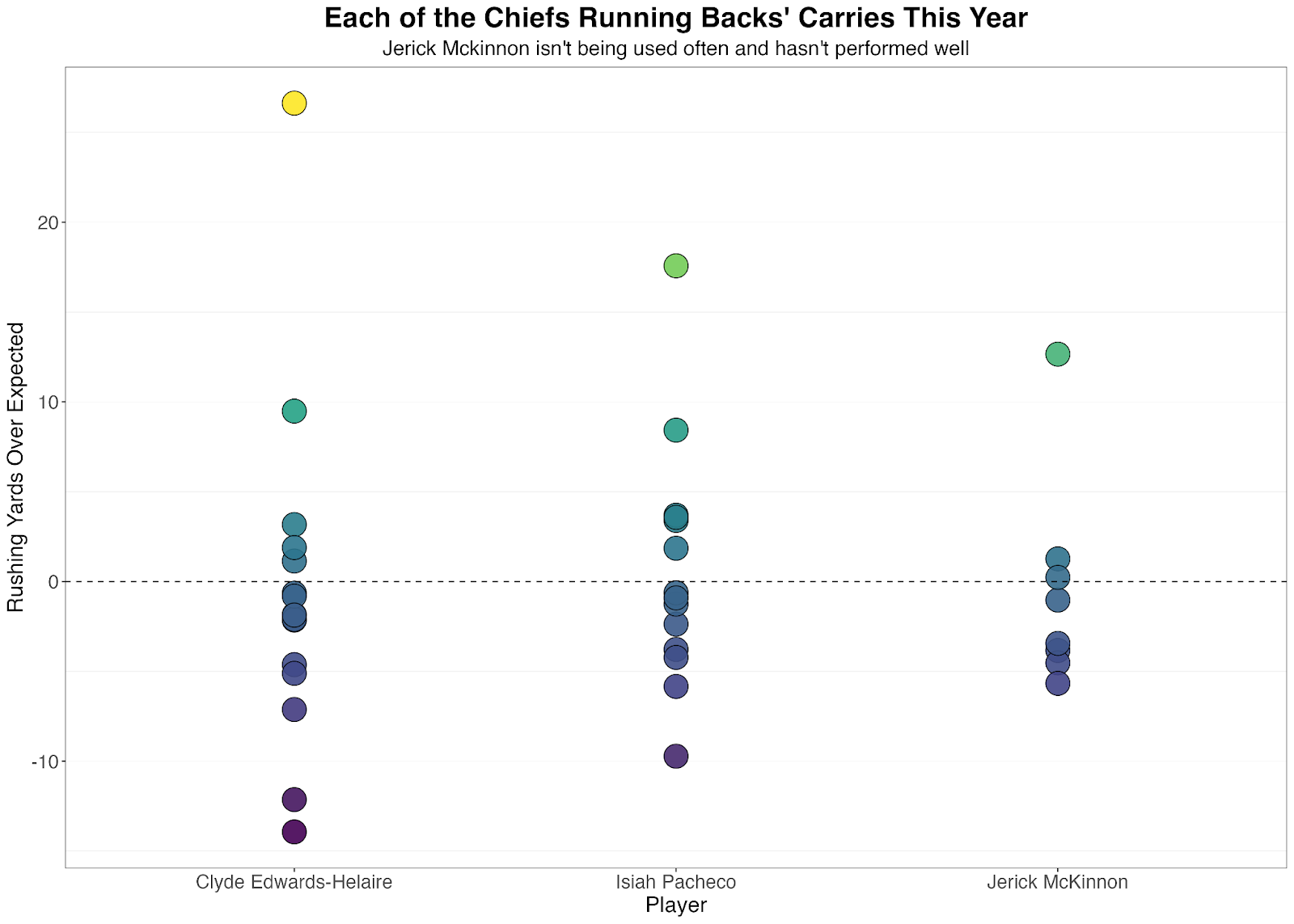 • McKinnon isn’t Used Often: Jerick McKinnon is only used on 17% of the Chiefs rushing attempts. When he has been used, he hasn’t been good — with most of his rushes for negative yards over expected and only one explosive run on the season.

• Chiefs Lead Early and Often: On early downs in game-neutral situations, the Kansas City Chiefs pass the ball 69.4% of the time, second in the league behind the Las Vegas Raiders. This means that they won’t be running that often, so the carries will be low for McKinnon.

• The Colts Play With an Extra Box Defender: So far this season, the Colts defense has the sixth-most defenders in the box in the league. If this trend continues, we can expect the Chiefs to pass more frequently with it being tougher to get work done in the run game. 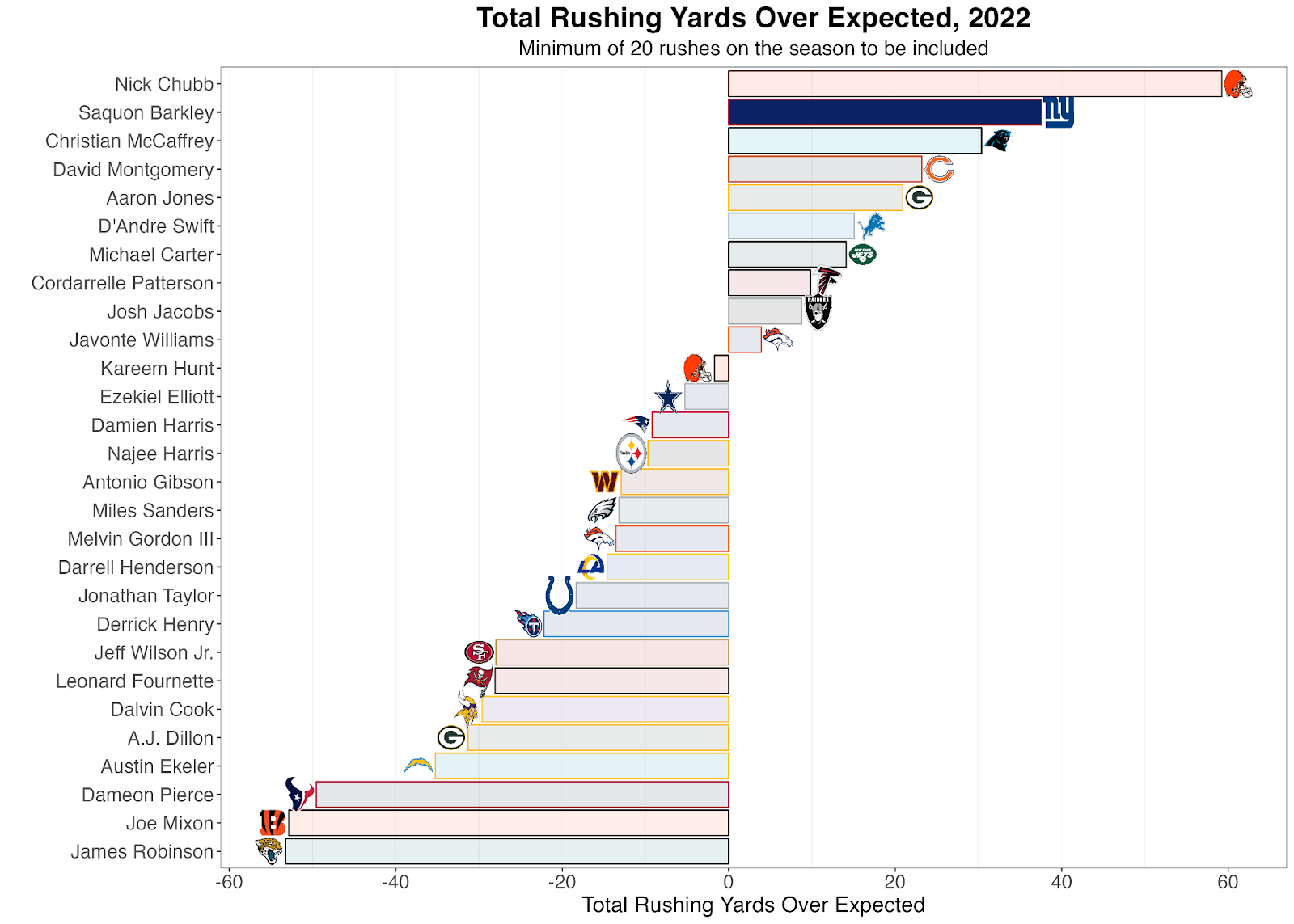 • Saquon Barkley is one of the Best Rushers in the NFL: From a pure rushing perspective, Saquon Barkley is only behind Nick Chubb in total ROE. This bodes well for over 78.5 rushing yards, as even if his offensive line isn’t blocking well or he’s being put in tough situations, Barkley will be able to overcome it because of his top-tier rushing ability.

• The Giants will Lean on the Run: On early downs in neutral-game situations, the Giants have rushed the third-most-often in the NFL (59.1%). Against a Cowboys defense that specializes in stopping the pass, Big Blue should continue that on Monday Night.

• The Cowboys Run Defense Can Give up Big Plays: Since 2021, the Cowboys' run defense has given up the fifth-most explosive runs (rushes that go over 10 yards) in the NFL. Barkley is a home-run hitter as a rusher and could break off a big chunk of his rushing prop in one carry.