NFL Week 15 Power Rankings: The Detroit Lions are on the rise, New York Giants fall out of the top 20

• Restoring the roar: According to PFF Greenline, the Lions have a 17% chance of making the playoffs ahead of Week 15. Dan Campbell's squad ranked second to only the Philadelphia Eagles in expected points added (EPA) per play in Week 14 (0.188).

• You're saying there's a chance? With the Commanders coming off a bye and the Giants losing to the Eagles, Ron Rivera's squad has a chance at a playoff berth. The Commanders beat the Eagles 32-21 in Week 10 and are favored against the Giants in the betting markets at -200.

With their decisive win over the Giants, the Eagles became the first to clinch a spot in the 2022 NFL playoffs. And over the next few weeks, we will see who joins them and who turns up short.

Restoring the roar: According to PFF Greenline, the Lions have a 17% chance of making the playoffs ahead of Week 15. Dan Campbell's squad ranked second to only the Philadelphia Eagles in expected points added (EPA) per play in Week 14 (0.188). Their defense has improved over the past few weeks, too, as they rank 17th in the league in EPA allowed per play over the past two weeks (-0.016). If they can keep this up, things look promising.

Reinforcements for Dallas: Look for the Cowboys to target recently acquired veteran receiver T.Y. Hilton this week against the Jaguars. He was the second-highest-graded Colts wide receiver last season behind Michael Pittman Jr. and ranked top-10 in receiving yards from 10-plus-yard passes from 2015 to 2021 (4,244).

Overall, the Jaguars’ defense ranks 19th in the league in EPA allowed per play this season. The pass rush has done well, however, with the side entering Week 15 with the 10th-best team pass-rush grade (72.5) in the NFL.

The Jaguars have mostly sent five rushers after the quarterback this year. Below is Hilton's route map against Jacksonville's five-man rushes since 2014. 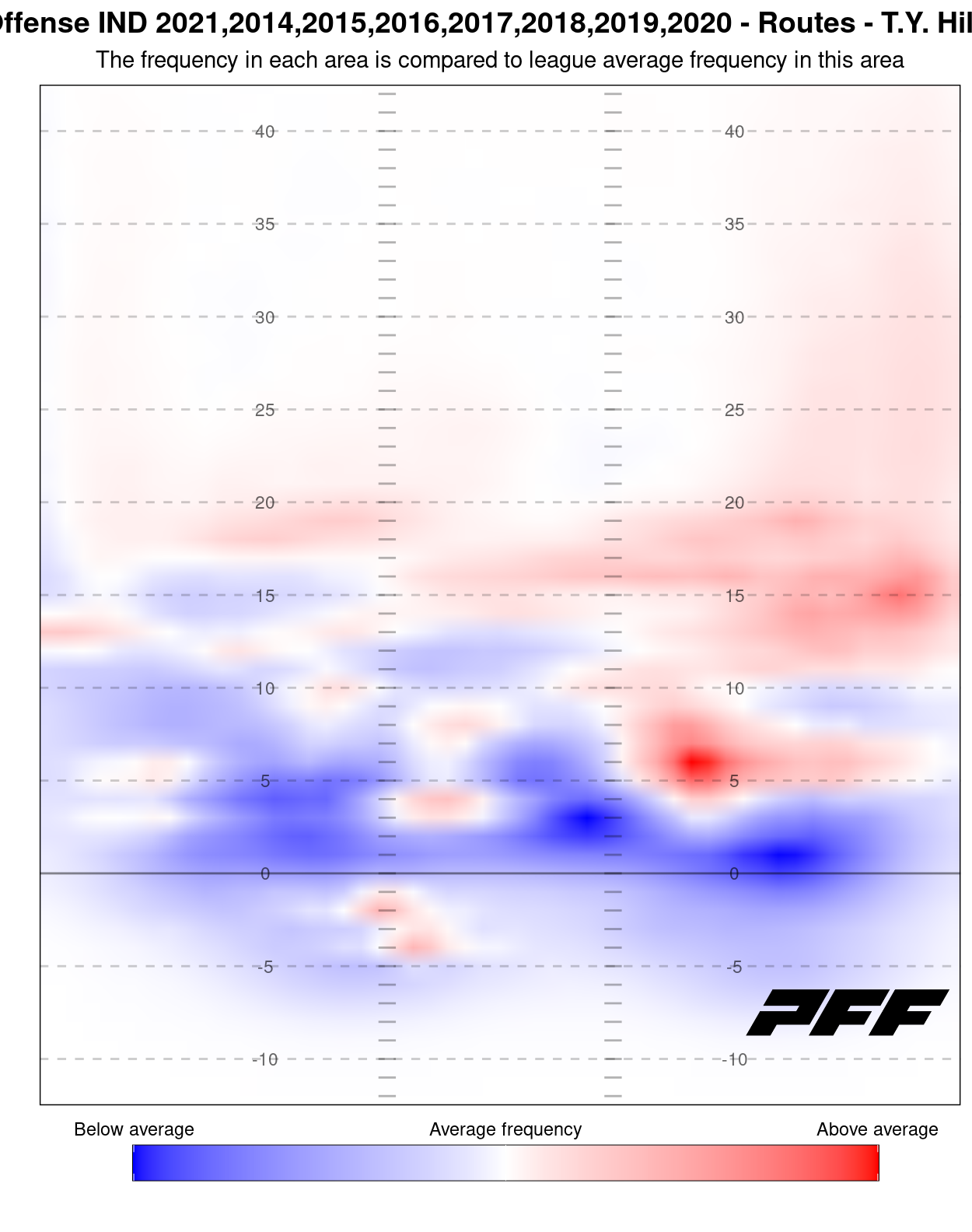 Mayfield's promising start? Baker Mayfield earned the second-best PFF grade of his season (61.9) in his first start for the Rams, even though only 48.5% of his passes were accurate. Mayfield had the highest uncatchable pass percentage of any quarterback this week (36.4%).

Bucking the trend: Per ESPN's Adam Schefter, teams are now 4-551 when trailing by 13 or more points in the final four minutes over the last five seasons, including playoffs. Two of those four wins have come in the last four days, courtesy of Tom Brady and Baker Mayfield.

You're saying there's a chance? With the Commanders coming off a bye and the Giants losing to the Eagles, Ron Rivera's squad has a chance at a playoff berth. The Commanders beat the Eagles 32-21 in Week 10 and are favored against the Giants in the betting markets at -200.

A new era in Atlanta: Rookie QB Desmond Ridder will start at quarterback for the Falcons this week after Marcus Mariota earned his worst PFF grade of the season against the Steelers in Week 13 (41.8). Ridder will look to prove himself in his first start.

Panthers in control? The Panthers are one win away from first place in the NFC South, and they control their own fate. Per PFF Greenline, they have the 22nd-hardest schedule remaining. If they win out, they will lead their division. They’ve impressed over their last four games, too.

The Jaguars dominated the top grades this week, with four players having the highest grade at their respective position groups.

Since Week 8, no offense has generated more EPA per play than the Lions.

Despite a slow start to the season, they’re right in the middle of the playoff race in the NFC and have strung together impressive outings against the Jaguars and Vikings —  games in which QB Jared Goff averaged 0.47 and 0.41 EPA per dropback, respectively.

With first-round pick Jameson Williams in the fold, the Lions have playmakers to attack defenses on all three levels — Williams and D.J. Chark Jr. can do damage in the deep part of the field, while Amon-Ra St. Brown is the go-to guy in the intermediate range.

According to our power rankings tool, the Lions have one of the easiest remaining schedules in the NFL, and if Goff keeps up his level of play, Detroit might be able to make the playoffs as a wild-card team.

Considering they started the season 1-5, it would be a very impressive feat.

Despite clinging to a playoff spot with their 7-5-1 record, the Giants have only one win since Week 7, which came against our 32nd-ranked Texans.

What has gone wrong? This week's game offers a mirror to their issues. As was the story in their loss to the Eagles — when they allowed 8.4 yards per carry — the Giants' run defense continues to sputter during the second half of the season, allowing the third-most EPA per run play at 0.085.

On offense, the team simply can’t generate any explosive pass plays — they had just one on Sunday — as they are last in the NFL with a 5% explosive pass rate.

A loss for Dallas: The Cowboys' offensive line has suffered another injury, as offensive tackle Terence Steele tore his ACL this past week. Steele ranks 21st among qualifying tackles in PFF WAR at 0.142. Thankfully, Tyron Smith will soon be back from a hamstring injury.

A tough week for the quarterbacks: Quarterbacks continue to take a beating this season. Kenny Pickett (0.924 WAR, 22nd among QBs) and Russell Wilson (1.109, 19th) both suffered head injuries this week. Kyler Murray (0.874, 23rd) tore his ACL three plays into Monday Night Football. Lamar Jackson (1.407, 15th) and Marcus Mariota are dealing with knee injuries, and Tyler Huntley is in the concussion protocol. Mike White (0.471, 31st) suffered rib injuries and was taken to the hospital after the game as a precaution.

Niners lose Deebo: Deebo Samuel left the game with a high-ankle sprain in the second quarter of his Week 14 clash against the Bucs. The dynamic receiver ranks 32nd among wide receivers in WAR (0.196) and leads the team in adjusted target percentage (27.2%).

Panthers lose Moore: Wide receiver D.J. Moore, who ranks 34th at the position in WAR (0.195), suffered an ankle injury against the Seahawks. He earned his worst PFF grade of the season (47.2). The fifth-year wideout has commanded an adjusted target percentage of 26.4% this year, so look for Laviska Shenault Jr. or Terrace Marshall Jr. to pick up some slack.

Rest up, Reek: Tyreek Hill was seen icing his ankle on the sideline on Sunday night. His game suffered as a result, and like Moore, he put up his worst PFF grade of the year (66.8). Hill has an adjusted target percentage of 39.6% and ranks second among wide receivers in WAR (0.612). It will be a significant loss if he cannot play next week against the Bills. 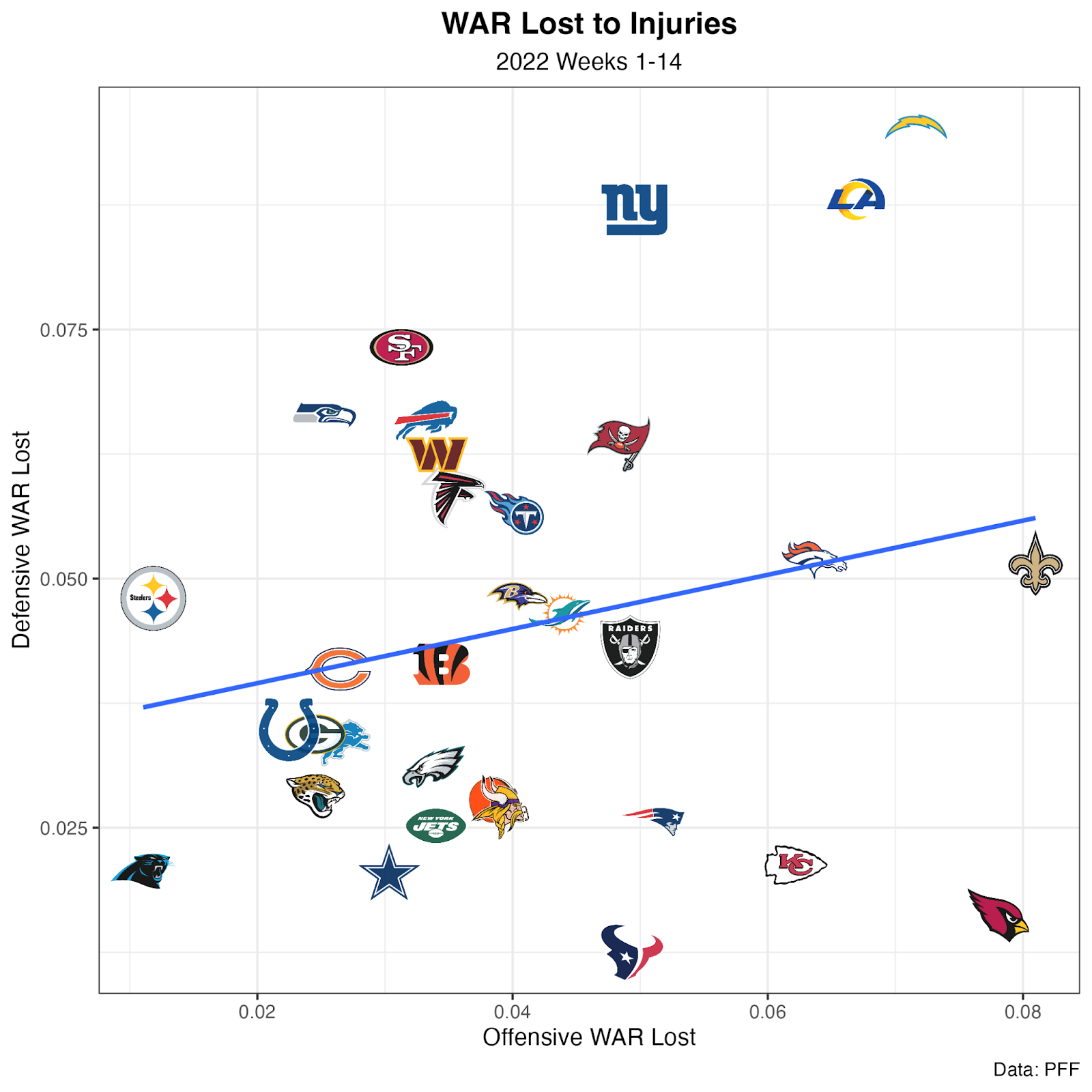 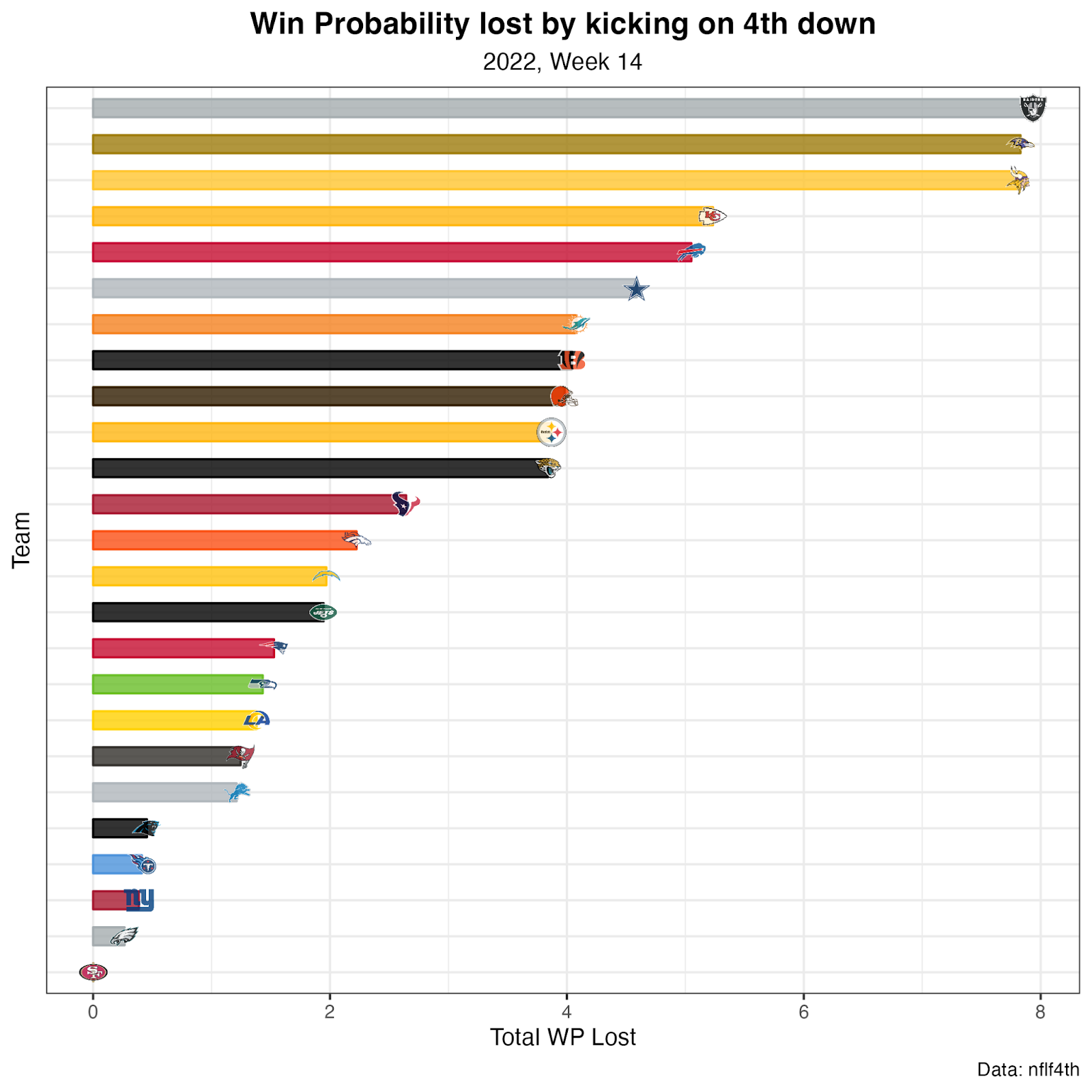 Raiders sticking to their guns: The Raiders' close loss to the Rams on Thursday night was partly due to poor decision-making on fourth down. They punted three times in the second half when they could have gone for it in at least one of those situations. The Raiders also settled for three field goals in this game when they could have been aggressive.

Then again, Carr’s two interceptions did not help their odds of winning.

Ravens in a similar boat: The Ravens found themselves in a similar situation — they also punted three times in the game. They were a little more aggressive, although they turned it over on downs in the second quarter due to a fumble. 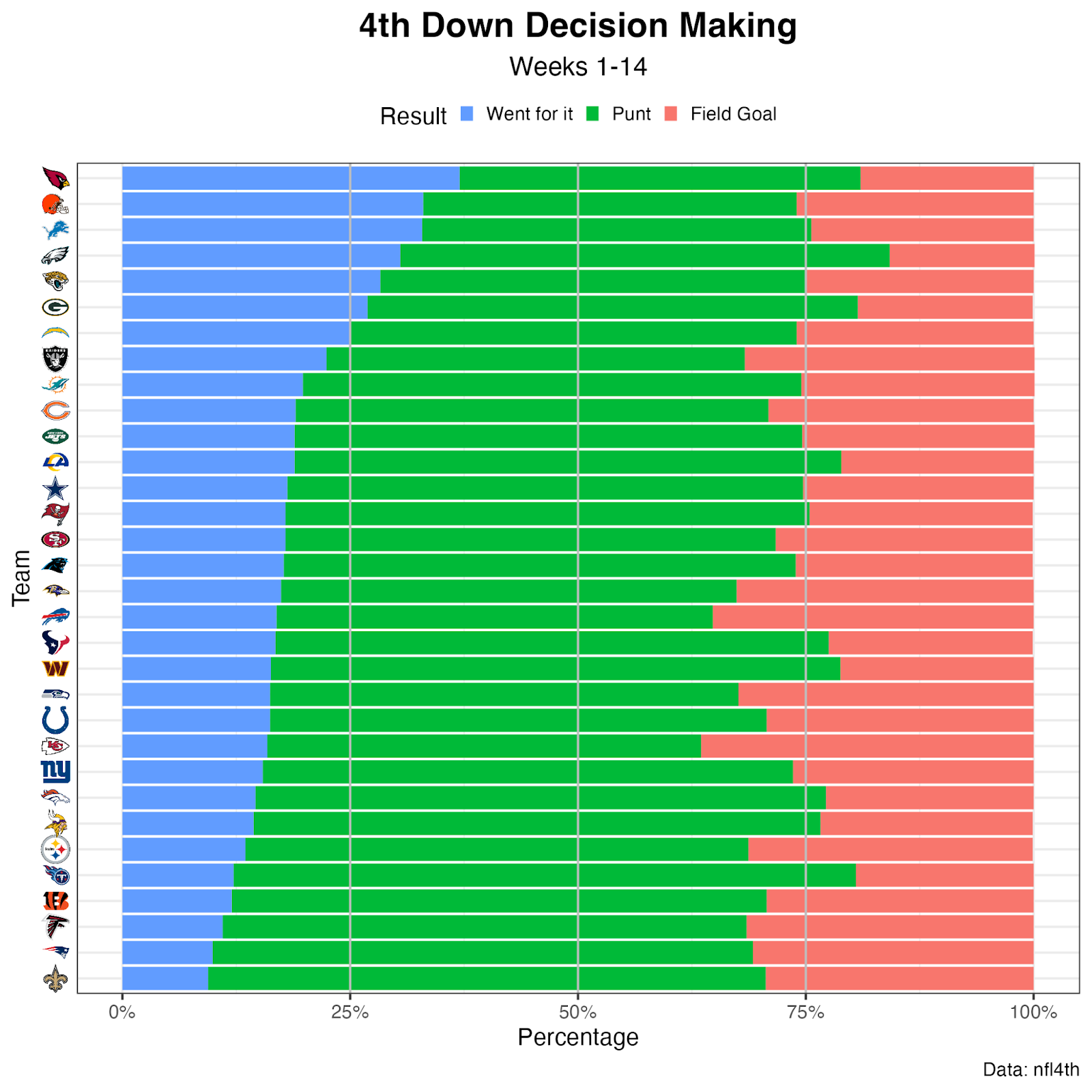 It's go time: The Cardinals and Browns have become more aggressive on fourth downs this season and pass the Lions in go-for-it percentage. However, the two offenses were among the worst teams in terms of offensive grades on fourth down this week.

Despite the win, the 49ers struggled to finish the game this week. They generated the most EPA per play (0.343) in the first half this week but the third-least EPA per play (-0.352) in the second half.

The Vikings led the league in second-half EPA per play this week (0.354). The Eagles and Lions were right behind them, while the Cardinals and Raiders generated the least EPA per play in the second half.

The Eagles lead the NFL in EPA per play (0.219) in the first half, though they haven't been quite as successful in the second half.

Although the Bills have been successful when it comes to completing drives, Josh Allen & Co. have struggled in both halves in terms of EPA per play. 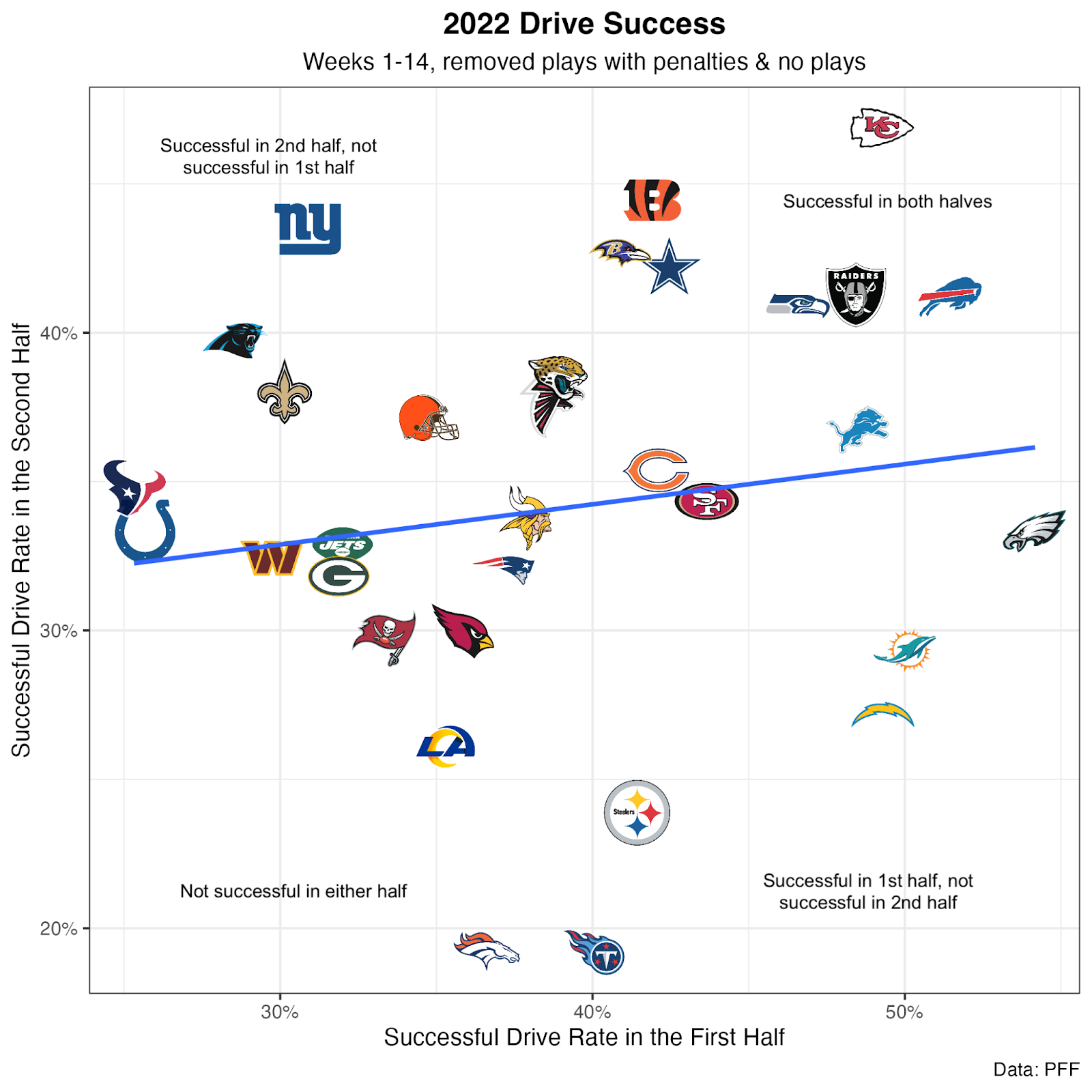