• Salt in the wound: The Packers suffered a boatload of injuries in Sunday’s loss to the Detroit Lions. Their biggest loss will be that of edge defender Rashan Gary (0.078 WAR), who will be out for the rest of the season with a torn ACL.

• Philly Special: The Eagles remain the only undefeated team and continue to field one of the best offenses in the league. They scored touchdowns on all four of their red-zone drives in their Week 9 win over the Houston Texans.

A new team sits atop our NFL power rankings ahead of Week 10: the Philadelphia Eagles. Another Eagles win and the Buffalo Bills’ close loss last weekend warranted a move-up for head coach Nick Sirianni's squad.

Meanwhile, fourth-quarter comebacks, head coach firings and blowouts are shaking up the rest of the NFL landscape. The 3-5 Indianapolis Colts made Frank Reich the second head coach to be fired this season after they posted their worst single-game team offensive grade (45.8) since Reich became the head coach in 2018. Now, it's interim head coach Jeff Saturday at the helm.

The Jets continue to impress, especially on the defensive side of the ball. Cornerbacks Sauce Gardner, D.J. Reed Jr. and Michael Carter II rank among the top 20 at the position in PFF overall grade, with Gardner leading the charge with an 87.8 coverage grade that ranks second league-wide.

Quinnen Williams is also emerging, albeit on the front end, and ranks third among interior defenders in PFF grade heading into Week 10. In all, the team is generating pressure on 35% of plays, the eighth-best rate in the NFL.

With a defense that has slowed some of the NFL’s best offenses, the Jets have just needed QB Zach Wilson to manage games and take care of the football. And that’s exactly the game script that helped the Jets to beat the AFC-leading Buffalo Bills this past Sunday.

This defense deserves respect as one of the league's best, but the Jets still need Wilson to take the next step if they are to rise further up the rankings.

After nearly three decades of dominance, the wheels appear to be coming off quickly for Aaron Rodgers and the Packers. Matt LaFleur's squad lost its fifth straight game and could not muster up any offense against a disastrous Detroit Lions defense in Week 9.

The receiving corps' inability to create separation leads them to face perfect coverage on more than half of passing plays — a figure that would’ve led the NFL in each of the past three years— leading all of Wisconsin to question: why did they fail to get help at receiver again?

Adding insult to the losing streak is the loss of multiple key players to injury: Star edge defender Rashan Gary will miss the remainder of the season with a torn ACL, and promising Romeo Doubs will join fellow wideouts Randall Cobb and Christian Watson on the sidelines. Starting cornerback Eric Stokes is likely done for the season, as well.

Is it finally Jordan Love’s time to shine in Green Bay? 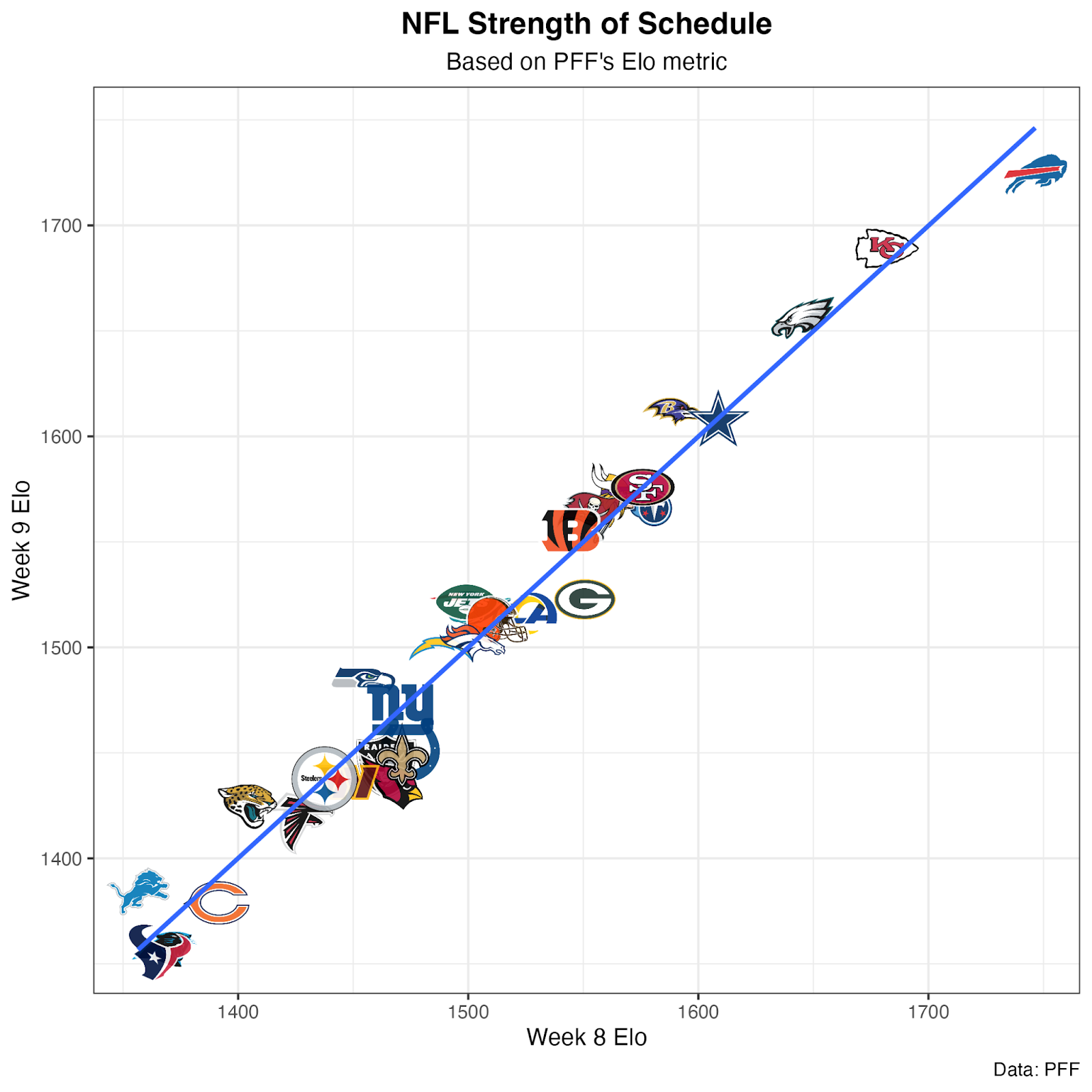 No Russell, no problem: The Seattle Seahawks are one of the biggest risers in our Elo rankings. After an imposing road victory over the Cardinals, they are on the rise after an uncertain start to the season following the Russell Wilson trade.

Robert Saleh's squad taking a stand: The New York Jets also took a slight jump in Elo ranking. Beating the Bills the way they did warrants the move, even if Zach Wilson’s performance wasn’t anything to write home about.

Trouble in Green Bay: The Packers keep falling down the rankings, and putting up just nine points on one of the worst defenses in recent history will do that. Even though they were able to move the ball and get into Lions territory, the drives either stalled or resulted in an Aaron Rodgers red-zone interception, which killed their chances of walking out of Detroit with a win. 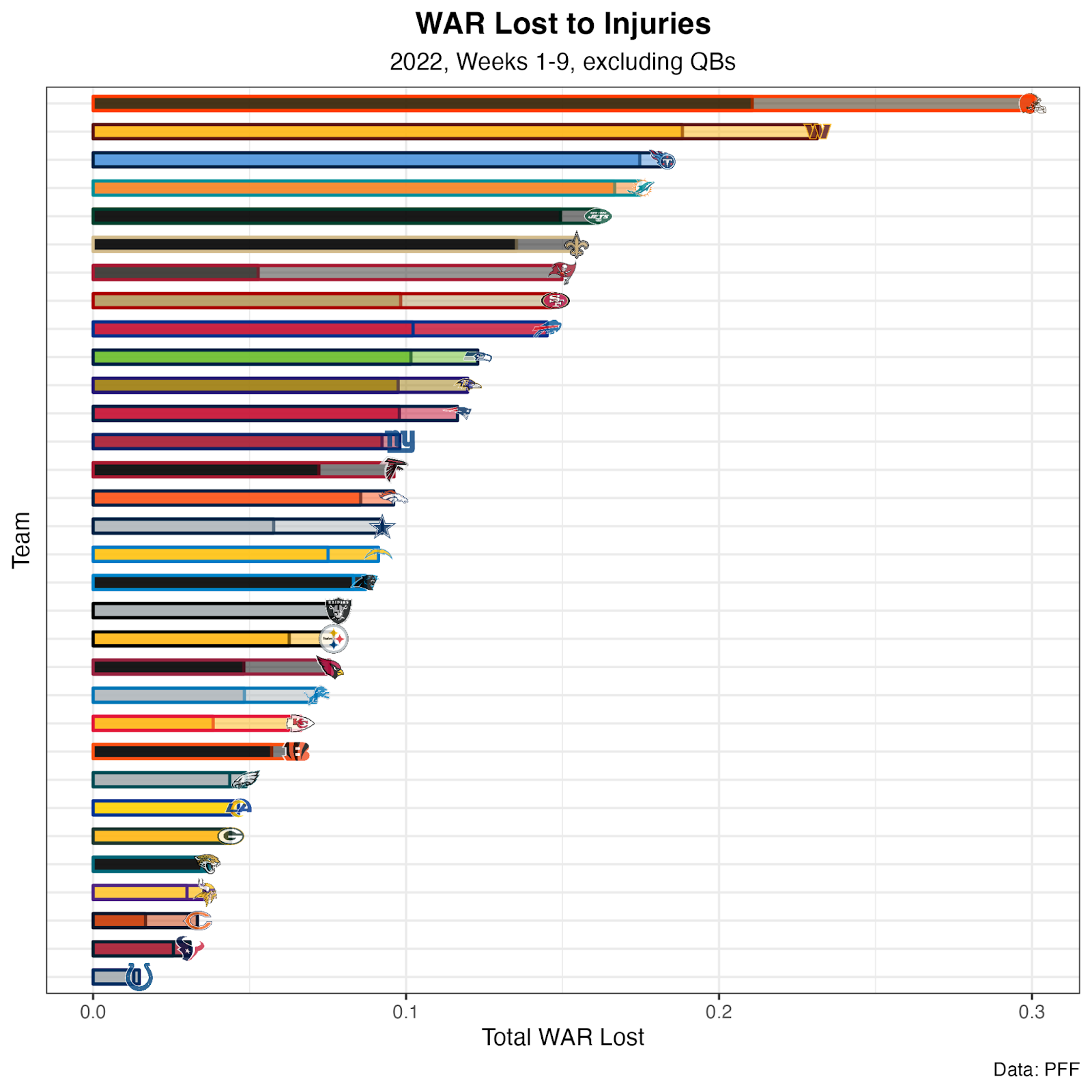 Salt in the wound: The Packers suffered a boatload of injuries in Sunday’s loss to the Detroit Lions. Their biggest loss will be that of edge defender Rashan Gary (0.078 WAR), who will be out for the rest of the season with a torn ACL. Running back Aaron Jones (0.1 WAR) suffered an ankle injury but may be able to play in Week 10, and the Packers also lost other key players in Romeo Doubs (0.025 WAR) and Eric Stokes (0.06 WAR). Note that some of these injuries have not been factored in yet, as Rashan Gary is yet to be placed on IR.

Jonathan Taylor‘s slow start: After taking the league by storm last season, Jonathan Taylor has only generated 0.034 WAR this season as he’s been struggling through an ankle injury. He hasn’t contributed much to the Colts offense, and it’s reflected in the Colts losing the least WAR due to injuries.

Reinforcements incoming for the Browns: Coming off their bye week, the Cleveland Browns have a couple of players listed as questionable in TE David Njoku (0.18 WAR) and OG Wyatt Teller (0.2 WAR). They’ll look to have both of these players contribute in Sunday's game against the Miami Dolphins. 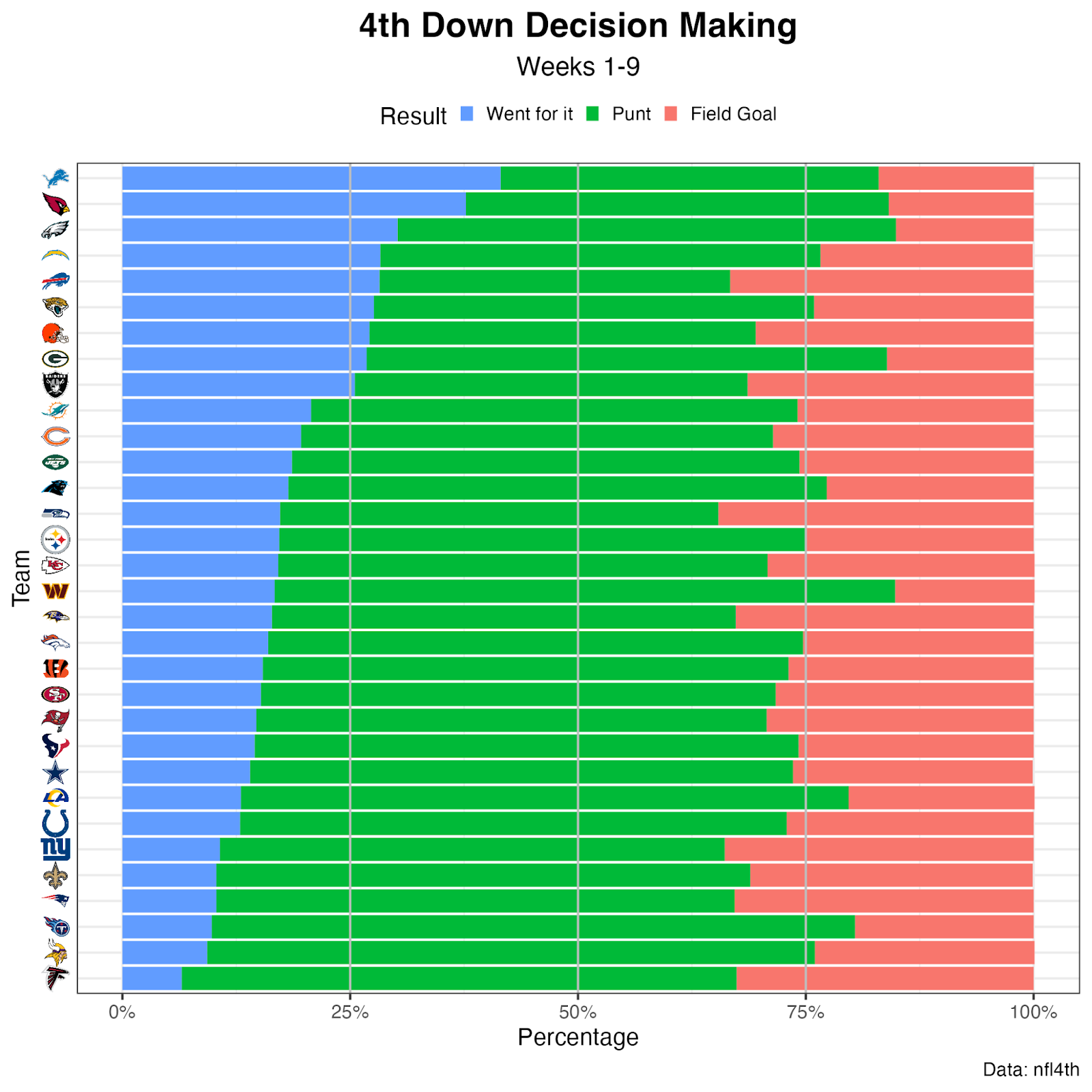 Taking the points: Despite the Tampa Bay Buccaneers‘ win over the reigning Super Bowl champion Los Angeles Rams, Tom Brady & Co. have not been aggressive on fourth downs. Of four red-zone drives last week, they scored two field goals and one touchdown. Their kicker, Ryan Succop, also had a field goal blocked in the second quarter.

In the end, they could have extended their lead had they attempted to score touchdowns instead of settling for field goals. 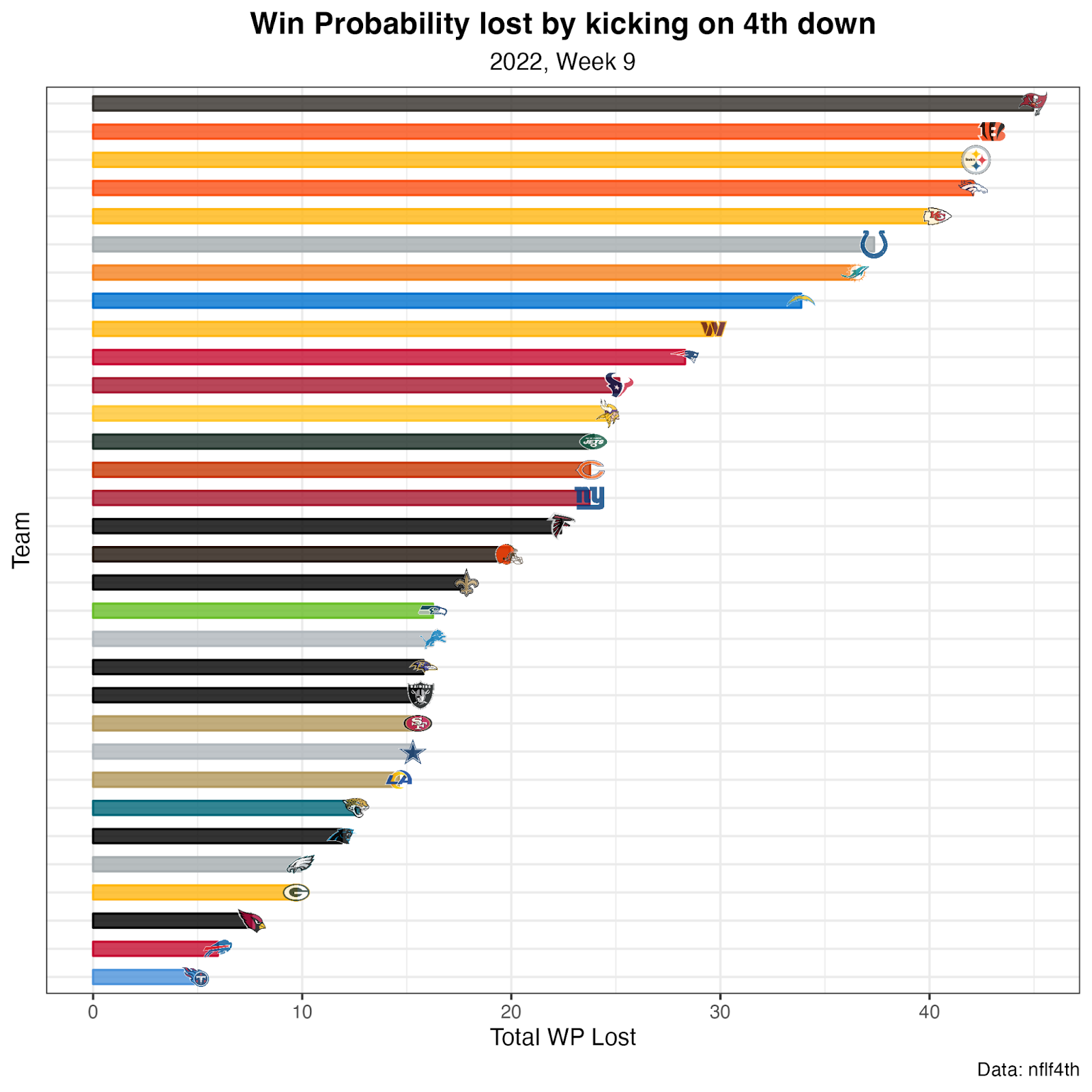 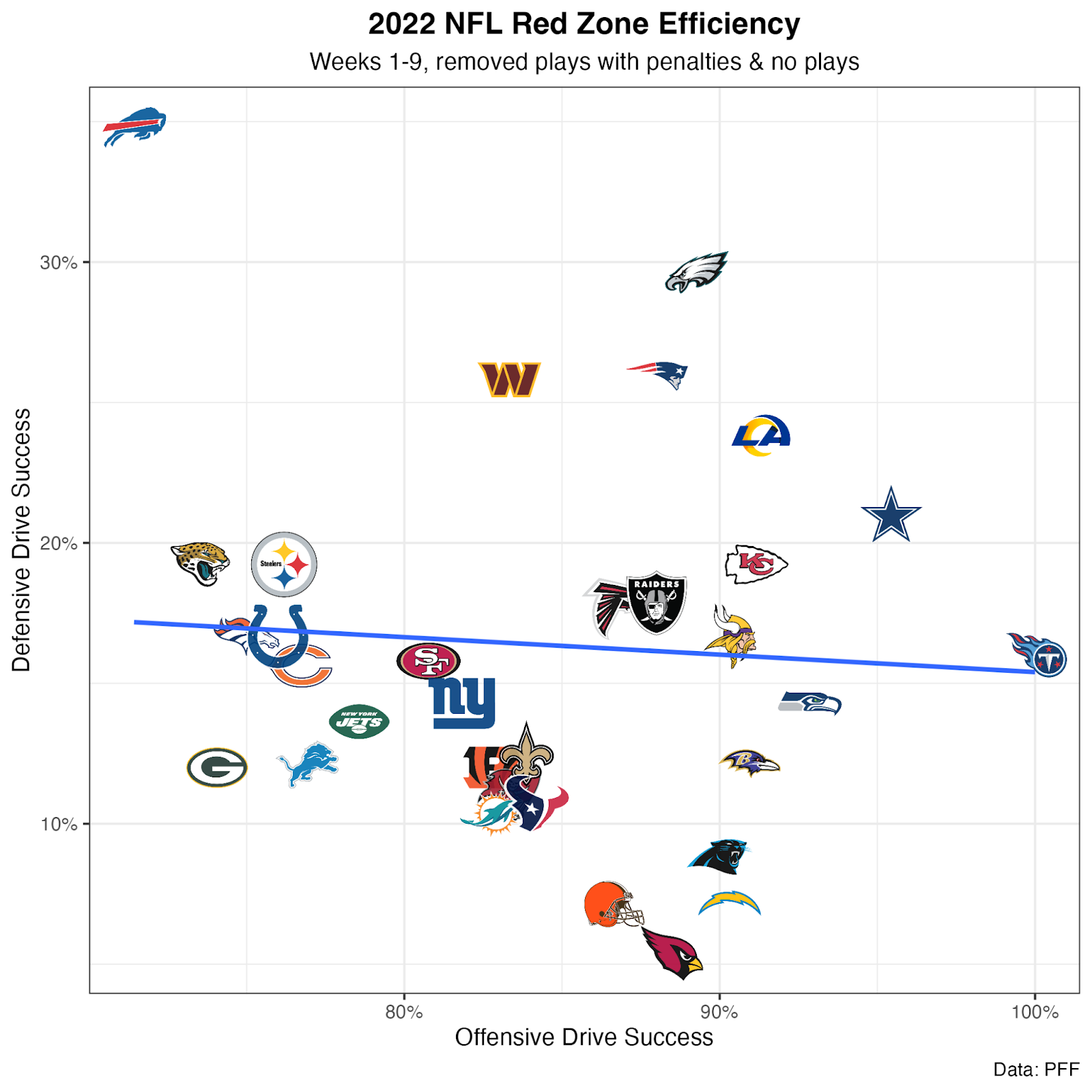 Red-zone efficiency is important to team success on both sides of the ball: Offenses want to score in the red zone as much as possible, while defenses want to prevent scoring or at least keep the opponent to a field goal.

Philly Special: The Eagles remain the only undefeated team and continue to field one of the best offenses in the league. They scored touchdowns on all four of their red-zone drives in their Week 9 win over the Houston Texans.

Room for improvement: Surprisingly, the Buffalo Bills have the lowest offensive drive success rate at a little over 71%. Against the Jets, they allowed two touchdowns and a field goal inside the red zone, while their offense scored only one red-zone touchdown.

Perfect Titans: The Tennessee Titans have scored on all 19 of their red-zone drives, with 15 resulting in a touchdown.

Where it matters most: The Detroit Lions are right behind, with 20 touchdowns on 27 red-zone drives. And despite the Lions fielding one of the NFL's worst-graded defenses, they are not the worst defense in the league at stopping drives in the red zone.

Tough week for Green Bay: The Green Bay Packers have been unable to find their rhythm on offense and defense, struggling to score and stop teams from scoring in the red zone. Their 15-9 loss to the Lions emphasized these struggles, as they scored on 40% of their red-zone drives, the lowest rate in the league this week. 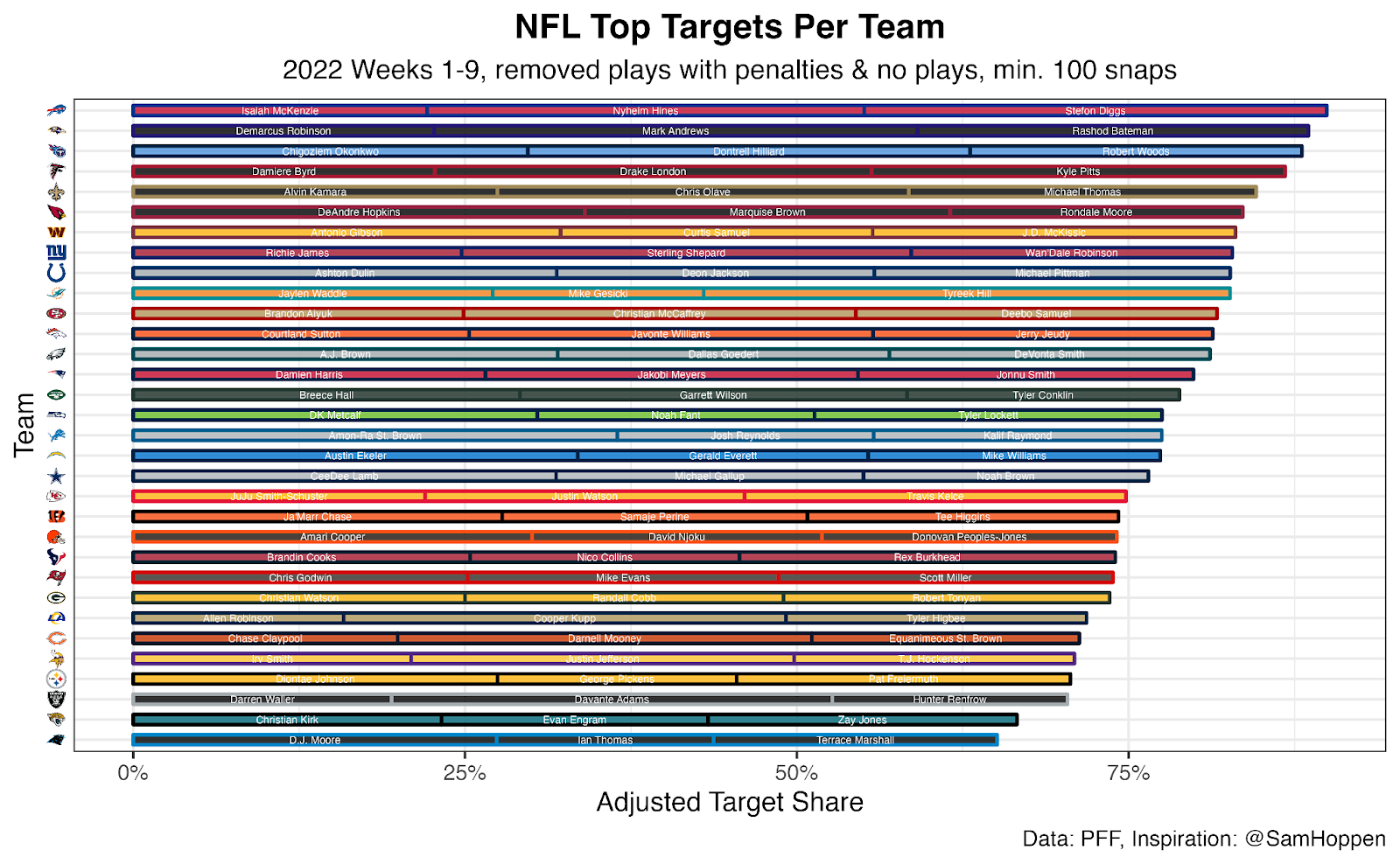 Throw it to Reek: Tyreek Hill has the highest adjusted target share (40%) of any player in the league with at least 100 snaps.

Goedert set for another big day: TE Dallas Goedert was a key fixture in Philadelphia's Week 9 win over the Houston Texans. He earned the team’s highest game grade and his highest grade of the season so far (90.6), putting up 115 yards and seven first-down catches.

Look for the Eagles to continue to target him against the Washington Commanders this week. The Commanders' defense has allowed 63.3% of passes to be completed this season, the fifth-highest mark in the league. However, they’ve allowed the highest average depth of target (10.3 yards) and highest successful play rate (51.6%).

The Eagles will have to earn a win against the Commanders’ coverage because Ron Rivera's defense has allowed an open target on only 46.8% of plays, the lowest in the league. In their Week 3 matchup, QB Jalen Hurts produced his highest big-time throw percentage (8.1%) of the season. Count on him to repeat this and involve Goedert in Week 10.