The talk of the offseason in the nerdiest corners of NFL media centered around defensive evolutions in football — where it was coming from and what’s being left behind. Offensively, since the 2016 Super Bowl run in Atlanta, the Shanahan coaching tree spent the past half-decade as the subject of the same kind of spotlight for how effective it’s been at attacking the last era of defensive dominance pioneered by Pete Carroll and the “Legion of Boom” era.

Football is predictably cyclical — you can’t possibly know which concepts or philosophies will recirculate or when, but everything eventually does come back around to fit within a modern context.

To set a foundation, we can lay out a brief profile of how the Fangio defense is structured based on his current tenure in Denver as the head coach (2019 and 2020 seasons):

We’re only a week in to the 2021 NFL season, so this is less about making any sweeping conclusions about how valuable these coaches are to their respective defenses or drill down on every bit of data. Instead, it's about comparing how each coach went about solving the problems presented by the offenses they faced.

Packers defensive coordinator Joe Barry saw more “regular” (two backs, two tight ends, or in Sunday’s example — an additional lineman) personnel than any of the other coaches on the tree, which gave an opportunity to examine what a defense from this coaching tree looks like in its base package. The 3-4 structure stays intact, but Barry wants to try to fit the run from split safety and single-high shells. Of the 19 run snaps the Packers played out of base, 10 came in a single-high scheme while nine came from two-high.

Base Run Defense Stats based on MOF

Joe Barry stays true to the Fangio approach when the nickel corner comes on the field: You put more defensive backs on the field to play more one-on-one coverage. The middle-of-field closed (MOFC) versus open (MOFO) split was 12-to-3 on run downs and 10-to-4 on passing downs. The man versus zone split in single-high defense was 4-to-6.

Against any 3×1 set, the defense played MOFC concepts exclusively and always rotated the coverage “weak” (away from the trips side). That may ultimately be the base method the Packers decide to play against trips, but it’s possible Barry wanted to make sure he had a defensive back matched up with Alvin Kamara in the flats and on choice routes due to his receiving ability. 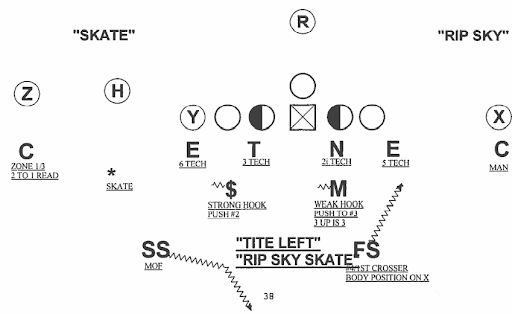 In a departure from the Mike Pettine era, Barry played dime on only four snaps, and all three passing downs were Cover 1.

Barry will probably play the most “vanilla” style of 3-4 of all members of the Fangio tree throughout the season. Mixing soft zones like Cover 4 and Cover 3 out of base makes sense to protect Green Bay's two true outside linebackers and play the edges differently without being predictable. There wasn’t any disguise to this approach in Week 1, either — 25 of the 26 total snaps spent in base came with no safety rotation. As we will cover, that’s not exclusive to Barry and Green Bay — the most carryover between these coaches will come in base packages.

In nickel, I’d expect to see Cover 3, with better coverage players matched up on the edges of the defense (over the tight end and slots). There is more work done in his nickel sets to change the picture for the quarterback with rotating safeties, as nine of the 28 snaps in nickel feature safeties spinning down or back pre-snap.

The Bears' defense ran into a buzzsaw to open the season, so it’s unfair to judge what 2021 will look like for this group without a much larger sample size. However, the number of two-tight end sets, tight splits and all of the empty sets Sean McVay employs may be instructive in how these coaches approach defending the run and the pass, because of the disparate schematic approaches from the Rams.

In base, Bears defensive coordinator Sean Desai takes a similar approach to fitting the run as Joe Barry does: He equally varies the safety shell and run-support system outside of the box. In the six run snaps Chicago defended in its regular personnel, the defense equally distributed the snaps spent in single-high and split-safety looks and a five to four split in total snaps, with no safety rotation at all.

Looking at defending the pass in nickel personnel, Desai employed a more balanced look in terms of safety shell and a bigger investment into two-high coverages, with a 9-to-14 MOFC to MOFO split and 17-to-19 overall. Against trips sets, the Bears played the pass with an even three-to-three split between split-safety and single-high — and six to seven overall.

Table of MOFC vs. MOFO against Trips

In general, what the Bears showed was the same as Green Bay in base: Mix up the looks behind a three-down front to combat the run schemes an offense is leaning on. Out of nickel, though, Desai wants to maintain that same mentality of multiplicity in his defense, though it’s evidently less about the idea of disguise and likely more about finding ways to protect the defensive backs, which looks to be the weakest position group on Chicago's defense again. The Rams torched the split-safety look anyway to the tune of a 151.6 passer rating and three touchdowns, but it may not matter what kind of defense is being played against them if quarterback Matthew Stafford performs as he did.

Kupp had 11.3 yards of separation from the nearest defender when the pass arrived (#4 Eddie Jackson), the most separation on a completion over 40 yards downfield over the last three seasons.#CHIvsLAR | Powered by @awscloud pic.twitter.com/wknSES43KV

Another touchdown in the #RamsHouse.

Stafford airs it out to a wide open @CooperKupp for a 56-yard score!

With the Packers, a more spread-out version of this offense, and the Vikings, playing a more classic version of “Shanny-ball” with offensive coordinator Klint Kubiak, both on the schedule twice, the Sunday night game against the Rams is likely instructive for how Desai wants to defend the multiplicity you’ll see from that tree of offensive minds.

We’ve covered Chargers’ head coach Brandon Staley’s defense schematically and philosophically ad nauseam. Staley’s top challenge in 2021 is showcasing what his defense looks like without arguably the two most valuable defensive players in the NFL playing for him.

In addition, the advantage that Joe Barry and Sean Desai have on him in Year 1 are defensive rosters that were built by prior regimes with a 3-4 structure in mind. Even if all the pieces aren’t in place, the body types and schematic familiarity are higher in those two franchises than it could ever be for a defense fresh off playing in Gus Bradley's scheme,  which is as four-down and single-high as there is.

How does one go about attacking these issues? Staley has to shave the square edges off the pegs to fit them into round holes. Edge player Uchenna Nwosu was on the field for 26 snaps as the second outside linebacker in the Chargers' base package in Week 1, setting the edge in the run game. In the two passes Los Angeles saw when in base, Staley had pressures dialed up: One where Nwosu got to rush and one where he dropped into coverage.

In nickel, Nwosu returns to his best role as a secondary rusher, dropping into coverage only once in the nine passes against nickel (again with a blitz called). This allows star edge rusher Joey Bosa to focus on rushing the quarterback, with no coverage snaps recorded in 39 total reps in Week 1.

To play all of the two-high coverages Staley likes, one of the linebackers will have to flex in and out of the box in nickel depending on the offense’s formation. This year, that player is Kyzir White, who spent 17 snaps in the box and 10 out in the slot. Whether the coverage concept was single-high or split-safety was only a slight tendency for where White lined up, but there certainly was a difference in performance: a 29.9 PFF grade on 12 MOFC snaps compared to a 91.2 mark on 16 MOFO snaps.

Lastly and most excitedly, there’s the matter of the defensive backfield. Having Derwin James back from injury and playing football is a good thing for everyone generally, and having him back to play for Staley is the rare opportunity of the skeleton key landing in the hands of someone who wants to peek behind every door.

It’s not just about using James to cover certain receiving threats, which he’s plenty capable of. What Staley showed Sunday against the Washington Football Team is that James is effectively taking John Johnson III’s old role for the Rams.

Across nine base personnel snaps, James logged four at free safety, two in the box aligned over a tight end, two in the slot and one on the edge as a blitzer. On 33 nickel snaps, 13 came at free safety, 14 in the slot and four in the box. On seven dime snaps, five were in the box and two out in the slot. James still looked to have some of the elite change-of-direction skills and burst needed to fit all the roles Staley has planned for him. If he stays healthy, we can expect the Florida State product to return to the lists of best defensive backs in the NFL.

While plenty has already been made of what Staley’s schematic approach is, it would still serve to look at some of the splits to get a feel for what makes him different from the others on the Fangio tree. Staley played with two-high safeties on seven out of nine snaps in base, 20 out of 33 times in nickel and two out of five in dime. You can see a large divergence in how he approaches stopping the run in these splits, as he’s much more comfortable living in a split-safety world and using certain techniques up front to stop offenses from punishing the lighter boxes he wants to play in — something we will take a more detailed look at later in the season.

Again, it’s only Week 1, and this is a topic that will be revisited at different points in the season, but it’s probably more appropriate at the moment to consider Sean Desai and Joe Barry as coaches who are a little closer to Fangio’s approach defensively and treat what Staley’s doing — while derivative of Fangio — as its own thing. Staley has a commitment to split-safety coverage shells that isn’t just an outlier in the league, but also among the peers who worked closest with the scheme he borrows from.

What ultimately becomes of this cluster of coaches will hinge on how they perform in their respective divisions: Desai sees the Shanahan offense four times between Minnesota and Green Bay, and Barry does so twice. And Fangio and Staley each have to contend with the Kansas City Chiefs, the most explosive offense in the NFL.

In each of these defenses, we will get a clear look at what it means to run a more “modern” 3-4 defense, by scheme and by personnel, and get an answer as to whether this is really the new wave of NFL defense.