Multiple and Aggressive: How Brandon Staley will fit the Los Angeles Chargers' personnel into his scheme

When a new defensive regime takes to a franchise, the conversation often centers around the idea of a change in the front. But now, after a season where 26 of 32 NFL teams played primarily out of nickel personnel, fans and analysts ought to put that conversation point to bed. This will be even more true with new Los Angeles Chargers head coach Brandon Staley, who constructs his defenses from the secondary in.

With that established, don’t be surprised if we hear reports from OTAs and training camp about Chargers players trying to adjust to a new approach to stopping offenses. After all, L.A.'s previous four seasons were spent under the imprint of Gus Bradley, running the single-high safety scheme that defined the last decade in Seattle and the best iteration of Jacksonville Jaguars football.

The Chargers played some variation of Cover 3 on 55.7% of their defensive snaps in 2020, compared to 35.2% for Staley’s Rams defense. And the disparity in approach only grows when looking at split-safety zone coverages, where the Rams (45% of snaps) dwarfed the Chargers (19%) by a 26-percentage-point margin.

Conventional wisdom suggests that teams play single-high defense to stop the run and split-safety defense to cover receiving threats. When defenses play Cover 1 and Cover 3, there will be one more defender in the box than the offense can block. In two-high looks, the defense is short one player in the box for the tradeoff of having a numbers advantage in coverage.

While there is some merit to this philosophy, the idea is incomplete. Despite playing more snaps in two-high looks than any team in the NFL, the Rams ranked third among the league's defenses in yards allowed per carry (3.8) and fourth in explosive run rate allowed (percentage of runs that gained 10 or more yards, 9.7%) in 2020. Bradley’s single-high-heavy defense ranked 16th (4.5) and 21st (14.0%) in those two metrics, respectively.

The conversation around Staley’s base 3-4 front becomes salient in the principles that inform the defense’s handling of its opponents' run schemes. The odd front calls for the down linemen to take on linemen square and force the offense to move laterally. Unlike playing with four-down fronts, this isn’t conducive to generating negative plays in the run game, evidenced by the Rams' 26th-place finish in tackles for loss or no gain (54).

Proficiently fitting the run out of split safeties requires defensive backs to get involved in making up for the light box. While single-high defenses can line up with the knowledge that all gaps are covered no matter what, two-high teams must be precise in getting the unblocked defender involved where the offense is trying to send the ball.

In nickel personnel, Staley gets run fits akin to what you’d expect out of base fronts by having his deep safety come off the roof and into the box. The front and the secondary structure in conjunction become a modern take on “bending without breaking.”

Against the San Francisco 49ers, the Rams gave a 3-3-5 presentation to the offense and fit this outside-zone run like a 3-4 defense, with safety Taylor Rapp adding in late. Not only does this run fit neutralize the run action, but the defense also keeps the three-over-two advantage away from the run, which dissuades RPOs and eliminates difficult single-coverage scenarios on crossing routes via play action. 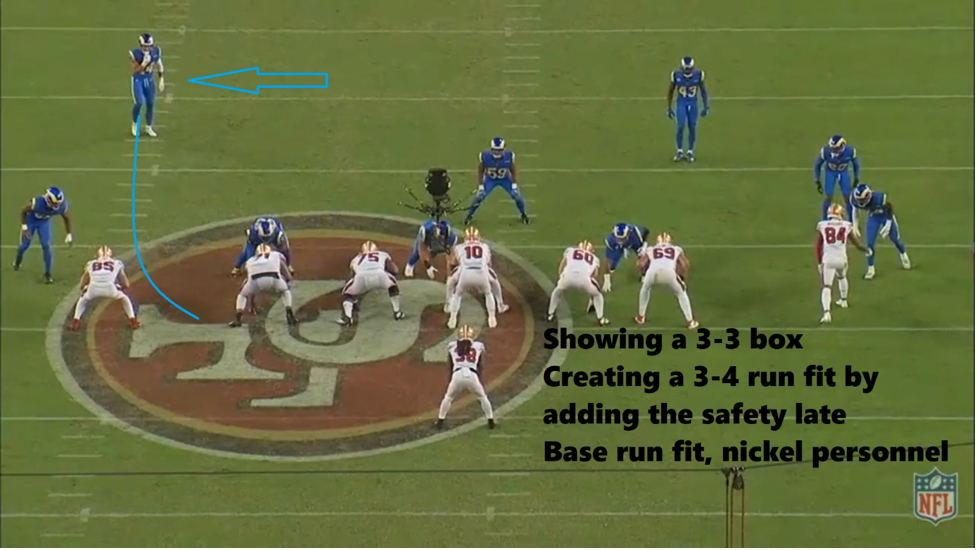 This is not exclusive to 3-4 run fits, but it is instrumental to understanding how Staley wants his defense to fit the run out of four-down fronts, as well.

To open the game against the Philadelphia Eagles, the Rams gave the offense a standard 4-2-5 nickel look pre-snap. Just as it played out against San Francisco, safety Jordan Fuller is the unblocked defender arriving late to the run fit. The base 4-3 run fit is achieved with the safety away from the initial run action to clean up the cutback. 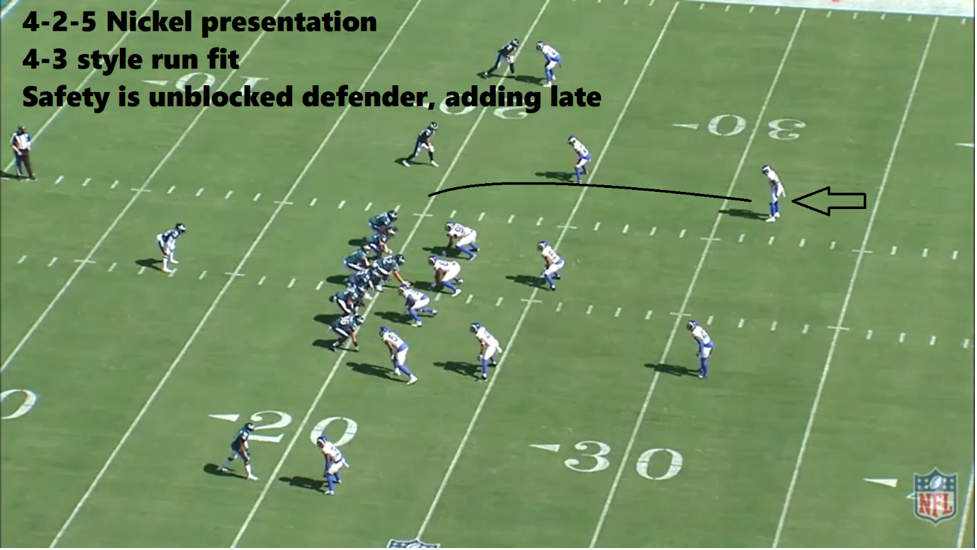 Note right defensive end Michael Brockers’ alignment: inside shade of the tackle. Aligning in that 4i technique and fighting to keep inside leverage allows Brockers to execute what the Rams value most — the opposing team spilling the ball out to the unblocked defender.

When Staley anticipated the pass, he dug deeper into his bag of split-safety coverages and played “quarter-quarter-halves” at a league-leading 18.6% clip.

While every coverage has its holes, the Rams safeties did an excellent job of robbing over routes and deep crossers while the underneath defenders dropped in the windows for other intermediate throws. This drove them to finish first among defenses in yards allowed per pass attempt (6.2) and explosive pass play percentage allowed (10.0%)

In the example below, the Washington Football Team is running a variation of a ubiquitous concept: Y-Cross. The Rams are playing halves to the field and quarters to the boundary, and the distribution of the routes allows their zone-droppers to wall off in-breaking routes. After an underneath release from his immediate threat, Jordan Fuller looks for work coming back across the field and takes the throw that QB Alex Smith wants most. Jalen Ramsey, playing slot corner, zones off when his initial threat runs an over-route and settles underneath the dig route. 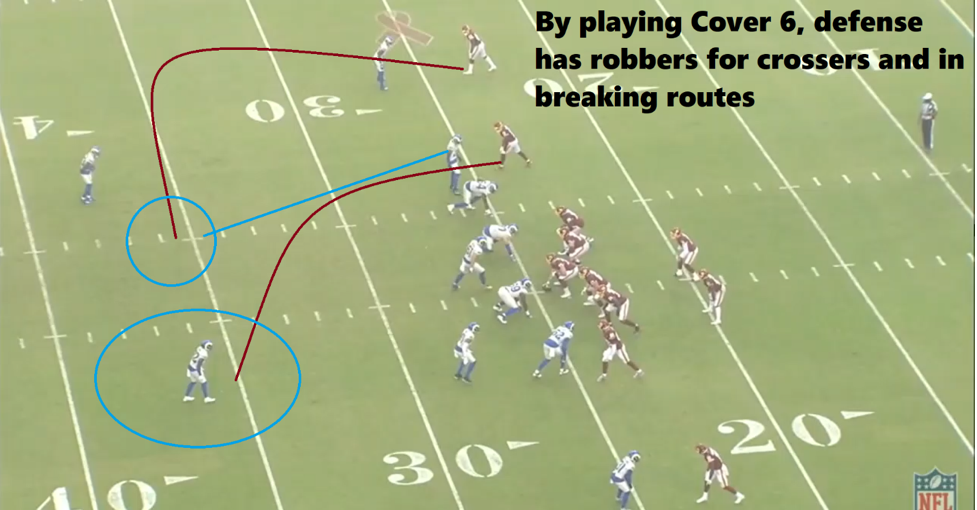 This takes away Smith’s secondary read, and he succumbs to the pass rush shortly after.

Not only does this coverage give the defense an easy answer for covering crossers, but it also simplifies coverage against bunches and stacks. In the clip below from the game against the San Francisco 49ers, not only is the skinny post covered, but the Rams also sorted out the switch releases coming out of the bunch and forced the check-down throw.

In the end, a scheme is only as good as its players, and the Chargers will have to make some important decisions on how to invest their money and draft capital this offseason.

A promising rookie campaign from Justin Herbert warrants addressing holes in the trenches, and picking at 13th overall likely leaves them crossing fingers that a player like Northwestern tackle Rashawn Slater slides. With the skill talent on offense already set, the rest of the focus on personnel should be given to the defensive secondary.

If Slater is off the board by the time the 13th pick comes around, it’s safe to assume that they will address the cornerback position by picking Virginia Tech’s Caleb Farley or Alabama’s Patrick Surtain II. The rest of the defensive lineup is already well in place, with Joey Bosa and Uchenna Nwosu manning the edges, Linval Joseph and Justin Jones inside, Kyzir White and Kenneth Murray at linebacker and Derwin James returning for 2021. Rayshawn Jenkins has shown promise as a partner to James at safety and should be retained, and the front office may have to say a difficult goodbye to Melvin Ingram III so that they can address other team needs.

Some of the issues in defensive production will be helped by Staley’s approach to defense and better injury luck in 2021: expect less one-on-one coverage in the seams and better numbers against the run.

The last time the Chargers had a talented young QB and a defensive mind on the cutting edge of football, the franchise enjoyed a stretch that peaked with a 14-2 season. Heading into 2021, the blue and gold have to be hoping that the typical bad luck and heartbreak that always seems to derail potential success has retired along with Philip Rivers.