Timing and rhythm is a crucial factor in the modern-day passing game, as there is a lot of evidence that suggests that offenses struggle once the quarterback can’t throw the ball exactly where he intended to after reading the defense. While the ideal scenario would be to have an open first-read — and one that can get open quickly — offensive execution in the NFL is far from perfect, and an unfavorable down and distance can force you into plays that take more time to be successful.

Consequently, longer developing plays still frequently happen — sometimes by design and sometimes because the coverage won the matchup with the opposing receivers. And an offensive line that can hold its own on these plays can be the difference between a successful deep throw to a receiver and a throwaway, sack or even an ill-advised throw under duress.

PFF has an abundance of data that can help us evaluate the performance of different NFL offensive lines during longer developing plays, such as time to throw and time to pressure (when pressure occurs) for every play. Naturally, the individual pass-blocking grades are also a factor, but our research has suggested that offensive lines are more (or in the worse case, less) than the sum of their parts. That’s why the basis of our rankings will consist of collective performance in 2019, which we will adjust for roster changes.

The ranking is a composed ranking based on two aspects:

If you follow PFF's analysis closely, it is almost needless to say that play action greatly helps pass protection buy more time. We, of course, adjust the grades for this and other situational factors.

The chart below shows the survival curve for the 2019 Tennessee Titans compared to the league average (black) and the expectation based on playcalling and situational factors. The interesting area for this article is the shaded area: How good has the offensive line been after 3 seconds into the snap compared to the expectation? In the case of last season’s Titans, no team was better. Is this enough to claim the top spot for 2020? 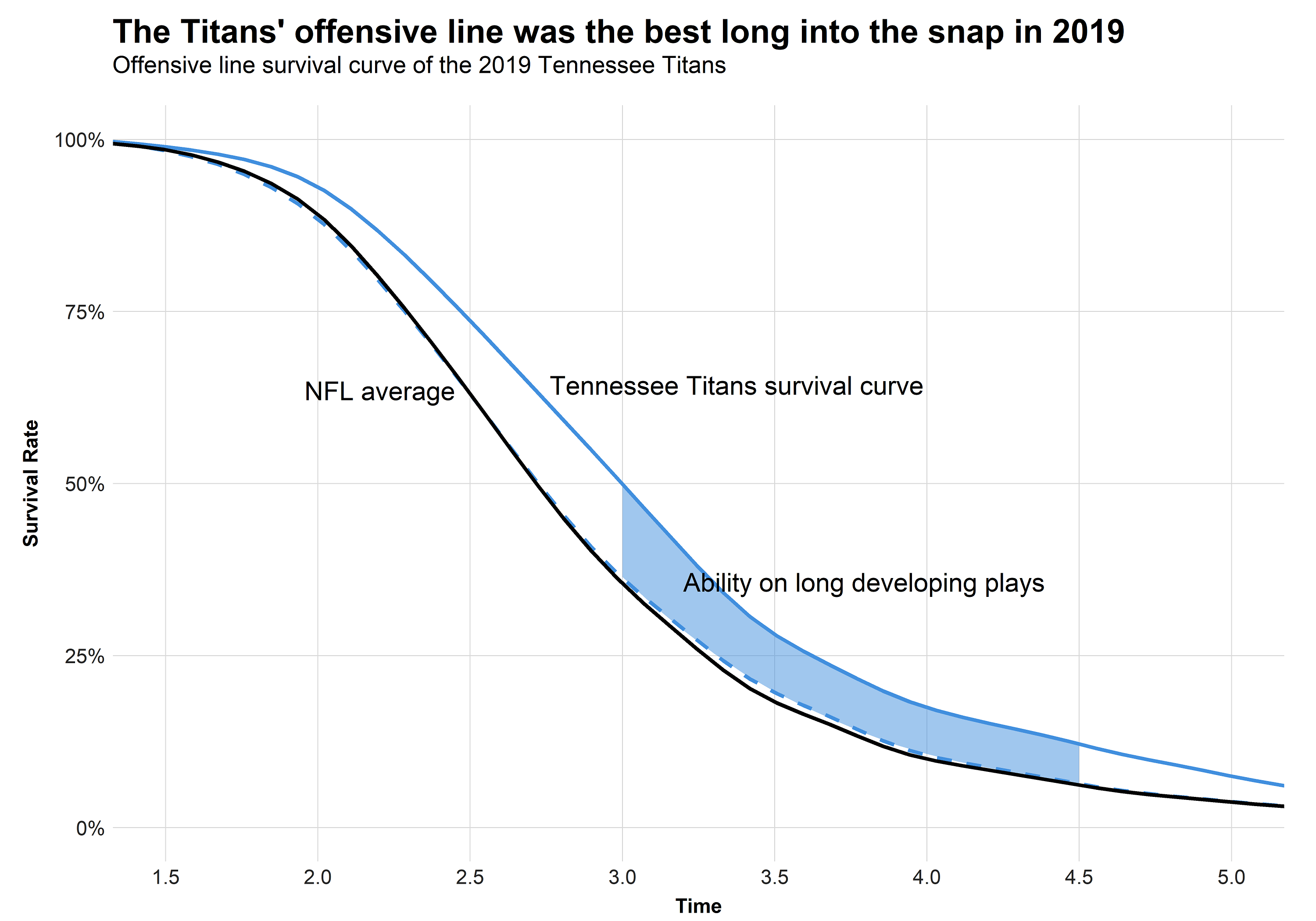 Without further ado, here are this season’s best units on plays where the quarterback holds the ball longer than normal.

Anchored by Rodney Hudson — the best center in the NFL — the Raiders lead our rankings. The team hasn’t lost a starter from their very good 2019 unit, and since continuity matters, that’s enough of a reason for us to put them in the top spot. Their only weak link, left tackle Kolton Miller, improved significantly in 2019 and can be expected to further improve to some extent. If everything goes well, there should be no excuses for Derek Carr in 2020.

Had they been able to keep Jack Conklin, the Titans would have surely been in the No. 1 spot. But losing a solid right tackle and having to replace him with a rookie — who we didn’t consider as pro-ready as some of the offensive tackles selected in the first round of the 2020 NFL Draft — is enough for the Raiders to leapfrog them in these rankings. The Titans offense relied on this strength a lot last year, with Ryan Tannehill holding the ball longer than any other starting quarterback.

We don’t know much about Ben Powers’ future in the NFL, but it’s very unlikely that he can do what Marshal Yanda did for 13 years in Baltimore. However, Ronnie Stanley and Orlando Brown Jr. are one of the best offensive tackle duos in the league, and both have been exceptional at longer developing plays. Given that the tackle position is the most valuable of all the positions on the offensive line, this is enough to mitigate the loss of Yanda and for the team to rank in the top three.

This might surprise some people, but the Texans’ offensive line quietly graded out very well in 2019. Left tackle Laremy Tunsil earned an elite 89.0 grade, while the other four starters all earned grades in the 70s. Having an elite left tackle alongside average-to-good starters elsewhere is — along with continuity — the perfect blueprint for building an offensive line. The Texans feature exactly that, and it could get even better if Tytus Howard can improve upon his solid rookie season. Deshaun Watson likes to hold onto the ball for a long time and make something happen — now he finally has an offensive line that lets him get away with that more often.

The Packers’ offensive line has long been one of the league’s best when it has come to keeping their quarterback clean for an extended period. We expect 2020 to be no different, even though they lost right tackle Bryan Bulaga in free agency. The team’s new addition, Rick Wagner, had an off-year in 2019, but if he can go back to what he showed in the previous five years, he will fit seamlessly into a unit that is anchored by stud left tackle David Bakhtiari.

Nobody loves longer developing plays more than Bruce Arians, and while that might change a little bit with Tom Brady at the helm, we can still expect Arians to run more of them than most playcallers do. Luckily, we can expect his offensive line to hold up, as they are one of only three teams — the Raiders and Steelers being the others — that ranks in the top 10 in both of the categories in question, and they haven’t been dealt the blow of losing a key starter. Due to age and injuries, Dotson was the worst of their two tackles in 2019, so Tristan Wirfs should be an improvement if he is as good as advertised coming out of Iowa. A further reason for hope is that their weak link in 2019, right guard Alex Cappa, is about to enter Year 3 of his career, the year offensive guards tend to reach their full potential.

The Patriots haven’t lost a meaningful starter along the offensive line; they also get back David Andrews and hope to finally get a full season out of Isaiah Wynn (who graded out better than replacement Marshall Newhouse last year). The only reason they don’t rank higher is the loss of longtime offensive line coach Dante Scarnecchia, who is thought by many to be the best offensive line coach in the league. Nevertheless, new quarterback Cam Newton doesn’t have to be worried about his pass protection in 2020.

The Steelers have been one of the best offensive lines in recent memory, and 2019 was no exception, even though Ramon Foster went through a steep decline. Foster retired after the season, so we will not find out whether that was a fluke or a trend. With Wisniewski taking his place, they should at least be able to replace his 2019 production. While Ben Roethlisberger’s weapons have a lot to prove this season, his offensive line can still be safely relied upon.

The New York Giants’ offensive line got some of the blame for Daniel Jones’ fumbling issues, but this wasn’t justified by any means. The Giants’ offensive line kept Jones clean longer than average, and they have a chance to be even better in 2020: Will Hernandez is supposed to improve in Year 3, Kevin Zeitler had his worst season in a long time and is expected to bounce back and rookie Andrew Thomas should be able to replace the non-impressive Mike Remmers. Will Daniel Jones make a sophomore-year jump? If not, don’t blame the offensive line.

The Buffalo Bills have built one of the best offensive supporting casts in the league. While the receiving weapons might get more attention with the signing of Stefon Diggs, the offensive line was already good in 2019 and goes into 2020 with the same starting lineup. Josh Allen shouldn’t worry about his pass protection, even on longer developing plays.