It’s NFL Combine week! As PFF descends on Indianapolis, it’s good to shed light on what we already know about some of the top prospects — it will help us put into context what a great week would do to sharpen our projections of the players moving forward.

Last week, I looked at do-everything Clemson defender Isaiah Simmons and Washington State quarterback Anthony Gordon, using our college-to-pro simulation of performance during a player’s first five seasons in the NFL. Such simulations use our play-by-play college and pro grades, adjust them for context and fold in athletic data like age, size and measurements to be entered at this week’s combine (and in the coming months’ pro days). Athleticism measures are imputed using a k-nearest neighbors approach until they are (if ever) known.

This week, we’re going to look at a player regarded by our draft experts Austin Gayle and Mike Renner as the best offensive tackle prospect: Andrew Thomas of Georgia. While Georgia’s offense struggled quite a bit in 2019, Thomas did not, earning over a fifth of a win above average, the fifth-best mark among tackles in college football. A starter since his true freshman year at Georgia, Thomas allowed only nine total pressures during his third and final season with the Bulldogs.

How Thomas Projects as a Pass Protector

When projecting Thomas to the NFL, the first thing we’ll look at is pass blocking (obviously), where he is a top-three prospect in terms of win rate and pressure rate allowed — in a cluster with fellow first-round prospect Tristan Wirfs and top-100 prospect Jack Driscoll of Auburn. His projected win rate as a pass protector is below the average of current NFL players, and his projected pressure rate allowed is also below average: 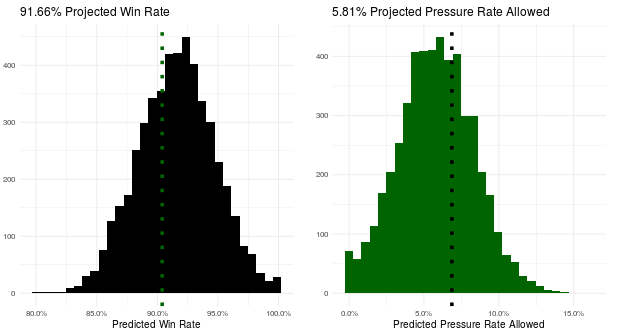 These projections are context-free and don’t include any combine or pro-day data. In that setting, Thomas’ comps are Russell Okung, Dion Dawkins, Morgan Moses and Jawaan Taylor. If Thomas tests as an above-average athlete with respect to pass blocking, his comps become much better (Laremy Tunsil, David Bakhtiari, Cordy Glenn, Kelvin Beachum). 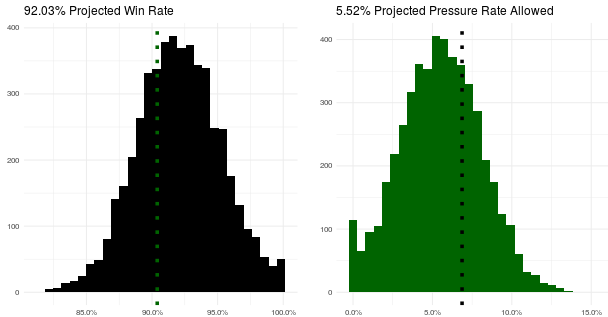 Thus, the team that drafts Thomas is going to, on average, get a good pass-protecting tackle. As my colleague Timo Riski wrote about earlier, it might take time for this to develop. But assuming that needs have been met at quarterback, receiver and coverage positions on the other side of the ball, Thomas projects as a good component to a passing game.

How Thomas Projects as a Run Blocker

While running the football is not as important as passing, being a liability in the run game is certainly worse than not being one. Luckily for his future team, Thomas is not a liability in the run game, projecting with a higher win rate than the average tackle while not losing in the run game much more than the NFL average. Thomas’ projected, context-free win rate is second in his class to Matt Hennessy of Temple, and his projected loss rate the fourth best. Such a projection is pretty stable with respect to scheme used and, of course, gets better if his combine/pro-day performance is better than expectation: 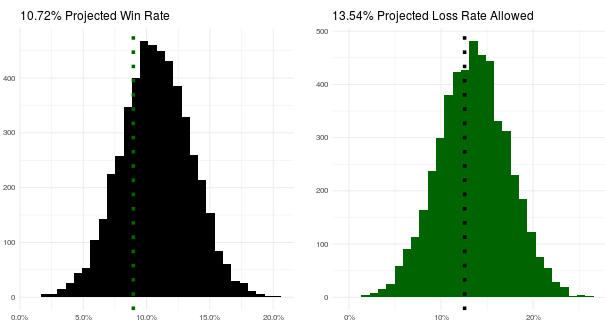 Andrew Thomas is the best all-around tackle prospect in this draft, projecting near the top of the class as a pass protector and a run blocker. While there are other prospects that project (slightly) higher than him in one facet or the other, no one blends the two better than the three-year starter out of Georgia. This is consistent with what our draft analysts believe after poring through the tape, which strengthens the conclusions of this purely data-driven projection.

While NFL teams have viewed tackle as one of the more valuable positions in the NFL, we've found that elite play at the position is less valuable than poor play is detrimental. Thus there is a risk that slow development at the position might hurt a team more than elite play later in a draft pick’s career will help it.

That said, pass protection has been on the downswing league-wide for some time now. If Thomas can buck that trend for an offensive-line-needy team, especially in the middle of the first round (rather than at the top), the pick will be viewed favorably for years to come.