PFF Data Study: Route usage takeaways after a quarter of the season

During the offseason, we presented a method to visualize the passing scheme of a team, more concretely the areas a team likes to attack, via route maps. In this and other articles, we looked at a few teams and players, including the Detroit Lions with Matt Stafford, the Kansas City Chiefs with Patrick Mahomes, the Tampa Bay Buccaneers with Jameis Winston and the Green Bay Packers with Aaron Rodgers. This article will revisit some of our findings and projections.

[Editor's Note: All ELITE subscribers have access to all of PFF's data studies in addition to Premium Stats, PFF Greenline and more. Subscribe today to gain access!]

From 2014 to 2018, Stafford has been a very conservative passer mainly because Golden Tate and Theo Riddick saw a lot of his targets in said span. Both Tate and Riddick combined for seven targets more than we would expect per every 100 routes in that five-year stretch. The Lions traded away Tate during the 2018 season and released Riddick during the 2019 offseason, two moves that led us to believe that Stafford would throw it more downfield this season. Four games into the year, we can safely say he exceeded even our expectations, and this is driven by both Stafford and his new offensive coordinator Darrell Bevell: He leads the league with an average depth of target of 12.6 yards and so does the average depth of target of 10.6 yards that the routes of his receivers would suggest. The difference of two yards is also the highest in the league. 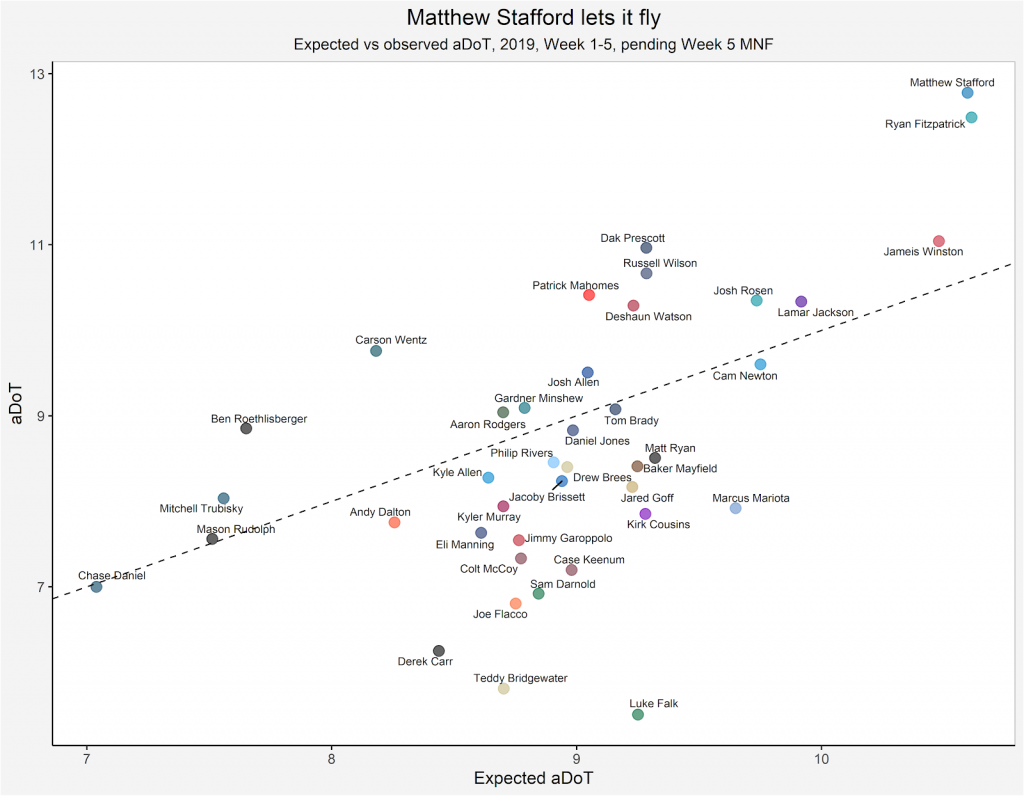 The new style of offense has certainly helped. The Lions’ pass offense has never been more efficient since Stafford joined the NFL in 2009, a large reason why we can imagine them to top the NFC North in the near future.

Who profits from Stafford’s new-found gunslinger mentality? That would be Kenny Golladay, who runs a very similar set of routes to what he used to the last two years with an expected average depth of target 15 yards downfield, but Golladay gains 6.7 more targets per 100 routes than expected in 2019 as opposed to 2.8 in his first two years in the league.

Andy Reid is about to bring Patrick Mahomes’ usage to perfection

Even without Tyreek Hill, a player that regularly alternates between a deep threat or an offensive weapon on screens or trick plays at the line of scrimmage, the Chiefs currently lead the league in a rather exotic statistic: They run 49% of their routes either behind the line of scrimmage or at least 15 yards downfield. 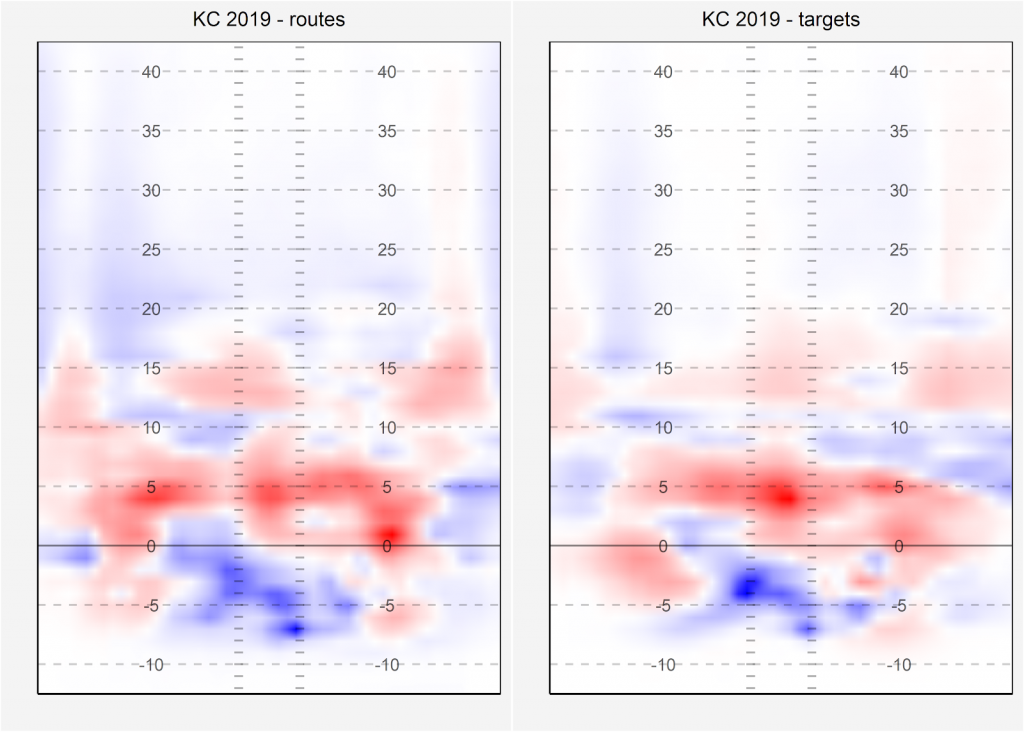 Given their personnel and Andy Reid’s play designs, this has some advantages:

1. Running a lot of routes deep gives Mahomes a ton of opportunities to take advantage of his big-play ability. Mahomes’ strong arm allows him to throw the ball deep from all platforms without risking an interception because he hardly underthrows his receivers. On deep targets, Mahomes has recorded 18 big-time throws and only one turnover-worthy throw in the first five games. When he throws an inaccurate pass on such throws, it’s most of the time an overthrow (14 times) as opposed to only one underthrow. It’s an intuitive result that overthrows are less prone to turnovers than underthrows and our own charting data powered by AWS machine learning capabilities confirms it: Among all deep passes thrown league-wide, 34% of all underthrown passes are a turnover-worthy play, but only 7% end up as turnover-worthy when the ball is overthrown. When you have a quarterback that is less prone to turnovers on the most valuable throws in the game, you should design plays for him to sling it. Andy Reid certainly does.

2. Mixing these deep designs with screens and trick plays off the line of scrimmage gives Mahomes’ arm and brain a well-deserved rest without losing much efficiency. Since the start of 2018, the Chiefs rank first in EPA per pass on passes that don’t travel beyond the line of scrimmage and it’s not close: The Chiefs gain 0.35 EPA/pass and the second-ranked Patriots gain 0.12 EPA/pass on these plays. To get an idea of the significance of this gap: The difference between the Chiefs and Patriots is as large as the difference between the Patriots and the 26th-ranked team.

3. We certainly believe that the first and second point are intertwined because it puts a lot of stress on the defense to account for Mahomes’ big-play ability and Reid’s genius at designing long gains out of short passes. The area in between mostly being occupied by Travis Kelce doesn’t help the defense either.

Mahomes is currently our third-ranked passer, but the Chiefs' passing offense leads the league in EPA per pass play by a considerable margin even after struggling on SNF against the Colts. Andy Reid’s scheme has a lot to do with it.

Bruce Arians’ offense hasn’t changed, but it’s not all good

We pointed out that our data suggests that Bruce Arians’ scheme fits Jameis Winston’s habits better than what Dirk Koetter ran in Tampa. Early responds confirm this, as the Bucs' receivers are apparently flooding the area 10-20 yards down the field. This happens to be both the most valuable area of the field and the area Winston likes to attack the most. No other quarterback has thrown into that area at a higher rate than Winston in the last four years. 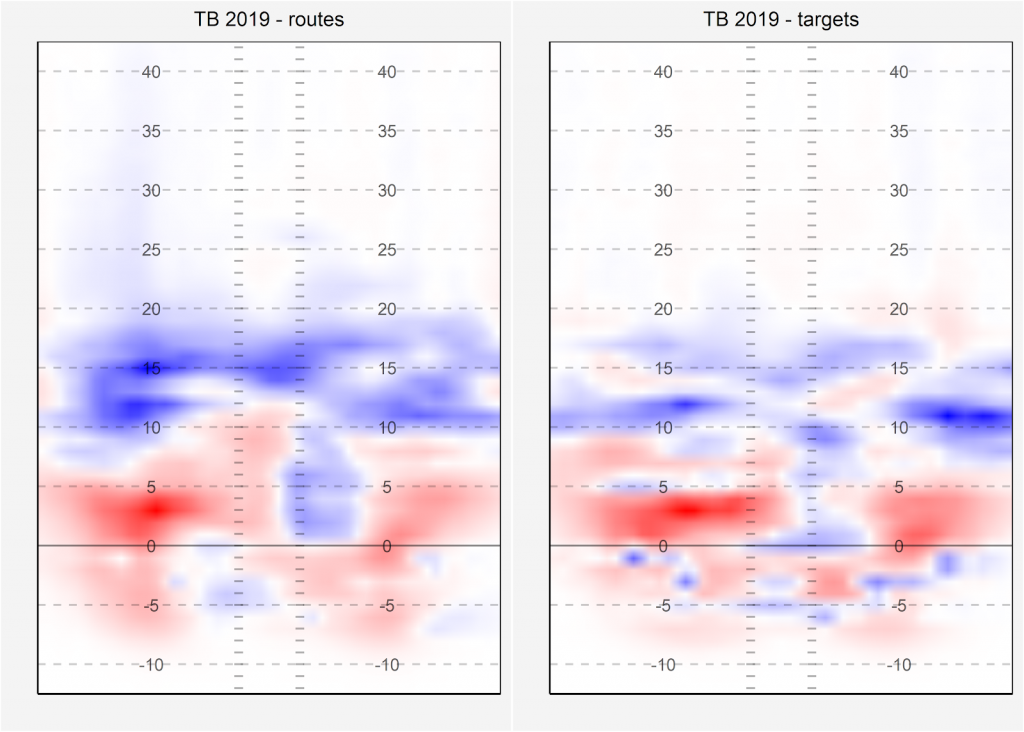 The Buccaneers' route usage over that area leads the league by a fairly wide margin over the first four weeks, as they were expected to throw there 35.5% of the time with the Titans coming in second with an expected rate of 31.4%. Winston still throws in that area at a high rate of 34.1%, only slightly behind the league-leading Rams (34.7%). Thus, Tampa is still attempting these valuable throws at a high rate. However, as opposed to previous years, Winston doesn’t have to force those throws anymore since more players are designed to throw there.

When reading a stat about turnovers, caution is always necessary since they are generally very volatile. It’s still notable that none of his turnover-worthy plays have come on targets 10-20 yards down the field.

The approach is paying early dividends. The Bucs’ 51.2 total EPA when targeting the area 10-20 yards beyond the line of scrimmage leads the league by far, as the Rams rank second with 36.0 total EPA on such throws. Last year, the Buccaneers gained 70.3 total EPA through these throws over the course of the season, so they’ve already matched a large portion of last year’s figure in just five games of play.

That said, there is a clear negative when regularly attacking the offense downfield: Pass protection becomes a more difficult task and this was on display on Sunday in New Orleans, when Winston took six sacks and ran away from pressure in multiple other unsuccessful plays. Using data powered by AWS machine learning capabilities, we see that Leftwich and Arians changed their approach to even deeper throws and might have gone too far against the Saints' pass-rush.

Just like in previous weeks, they attacked the area 10 or more yards down the field at a rate of roughly 60%. Against the Rams, this figure split into attacking the intermediate area (10-20 yards) at a 44% rate and the even deeper area at a 17% rate. In New Orleans, they attacked both areas 30% of the time, clearly their season-high number when it comes to attacking 20 yards or deeper. The long-developing routes rarely came open before the pressure arrived at the quarterback, as only four of the 51 routes that the Bucs ran 20 yards or deeper were targeted. Two of these targets ended up in turnover-worthy passes, and only one of them was completed. In contrast, Winston targeted the intermediate area 10 times and was positively graded on eight of those throws. While a small sample, this confirms what we’ve pointed out before: Winston excels at throwing intermediate passes but struggles to throw it deeper. Given the issues in pass protection that became visible on Sunday, we believe that they should revert back to what they did in previous weeks and attack the intermediate area at a league-high rate.

In another article dating back just after the kickoff, we discussed Aaron Rodgers‘ refusal to pass the ball over the deep middle of the field and subsequently wondered whether Matt LaFleur, a coach coming from a tree that loves to attack that area of the field, would try to change this. He hadn’t done this in the opener against the Bears and the route heatmap suggests that he also hasn’t done this in the three games that followed. 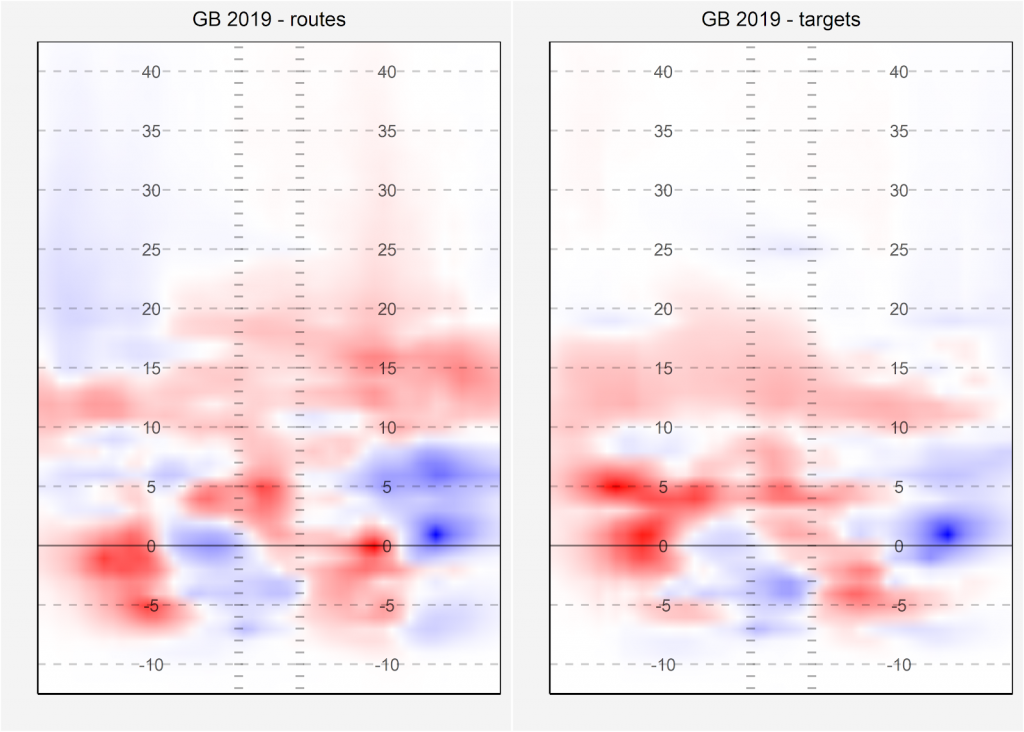 In the first four games, only 19.5% of their routes are supposed to be targeted over the deep middle of the field, a figure much lower than what McCarthy (20.9%) or LaFleur (22.3%) did in 2018, as it would have ranked 29th in the league last year. Rodgers is apparently fine with it. He has been expected to target the deep middle 27 times and did it 23 times, thus being on pace to throw it over the deep middle roughly 75 times this year. This would be his lowest total going back to 2014.

The results have been mixed so far. The Packers' pass offense started with two bad games against the Bears and Vikings, followed up with a good game against the Broncos, a really good game against the Eagles, but reverted back to a mediocre performance on Sunday against the Cowboys. It’s noteworthy that in his best game of the season in terms of EPA per pass play, Rodgers targeted the deep middle of the field eight times against the Eagles; in no other game has he thrown more than five such passes. On throws over the deep middle, Rodgers ranks fourth in passing grade and third in EPA per pass. While we are aware of the possible selection bias that goes into that statistic (our data suggests Rodgers might choose only the most promising throws over the deep middle of the field, leaving out potential risks), we’d still like to see more aggressiveness to turn the Packers into a dangerous team going forward.