One of the many post-Super Bowl debates is the qualification, or lack thereof, for Matthew Stafford to eventually ascend to a position of football royalty in Canton, Ohio. Stafford’s Hall of Fame credentials have been touted in previous years, but without as much as a playoff win, the case was never taken seriously by serious people. Now that Stafford has made the trip to the West Coast and secured not only his first playoff win, but four of them along with the Super Bowl, his Hall-of-Fame case has gotten much stronger.

When Stafford was floated as a potential inductee in the past, the battle lines were drawn between counting stats and efficiency metrics, with Stafford having the former in buckets. He is already a top-12 quarterback in NFL history for passing yards and touchdowns, but at the cost of the 12th-most pass attempts. Prior to 2021, Stafford was more of a stat accumulator than tactician, but that also changed for him along with the scenery in 2021.

Stafford led the NFL in expected points added per play, including all games through the Super Bowl, where his previous best full-season ranking was fourth all the way back in 2011. In an analysis heavy in skepticism that Stafford could ascend to an elite level of play, I documented before he was traded last offseason that he had mostly been a good, though far from great, quarterback during his 12 seasons with the Detroit Lions.

So now the question becomes whether the great statistical season for Stafford and his team’s success on the largest stage flips the entire trajectory of his legacy, putting him in contention for the Hall of Fame. The last thing we want to do is get caught up in the moment and overvalue his recent accomplishments while also tip-toeing around the urge to fight against the tide and unfairly discount what was an outstanding season. In order to avoid those pitfalls, I did what nerds do: I went to the data. I collected a number of metrics relevant to judging a quarterback’s career, including seasonal efficiency rankings, counting stats, playoff success, Super Bowl appearances and wins.

Armed with many rounds of statistical firepower, I ran them through a relatively simple logistic regression model, letting it do the dirty work of identifying the most relevant variables for making the Hall of Fame, and how we should weigh each of them. I found that the most impactful variables are, in order, Super Bowl wins, top-five seasonal efficiency finishes, Super Bowl losses and top-10 seasonal efficiency finishes.

To get a robust sample while making the model training data most similar to the current NFL, I used only the historical results of quarterbacks who played their final season in 1980 or later and had at least one top-five season according to adjusted net passing yards per attempt.

Commonly known as ANY/A, adjusted net yards per attempt incorporates bonuses and discounts for different outcomes, with a formula of:

In this way, you get a number on a per-opportunity basis that gives credit for passing efficiency and touchdown production while taking away for sacks and interceptions. Expected points added is probably a better marker of quarterback efficiency, but the numbers going back beyond the past 20 years are limited.

We can use the model results to predict the probability of making the Hall of Fame for each current and ineligible quarterback. The first table below includes the quarterbacks from the historical data set who are most likely to make the Hall of Fame, according to the model (>95%), with the variables listed above and the number of qualifying seasons (200+-plus passing attempts pre-2000, 300 thereafter).

The Hall of Fame Locks 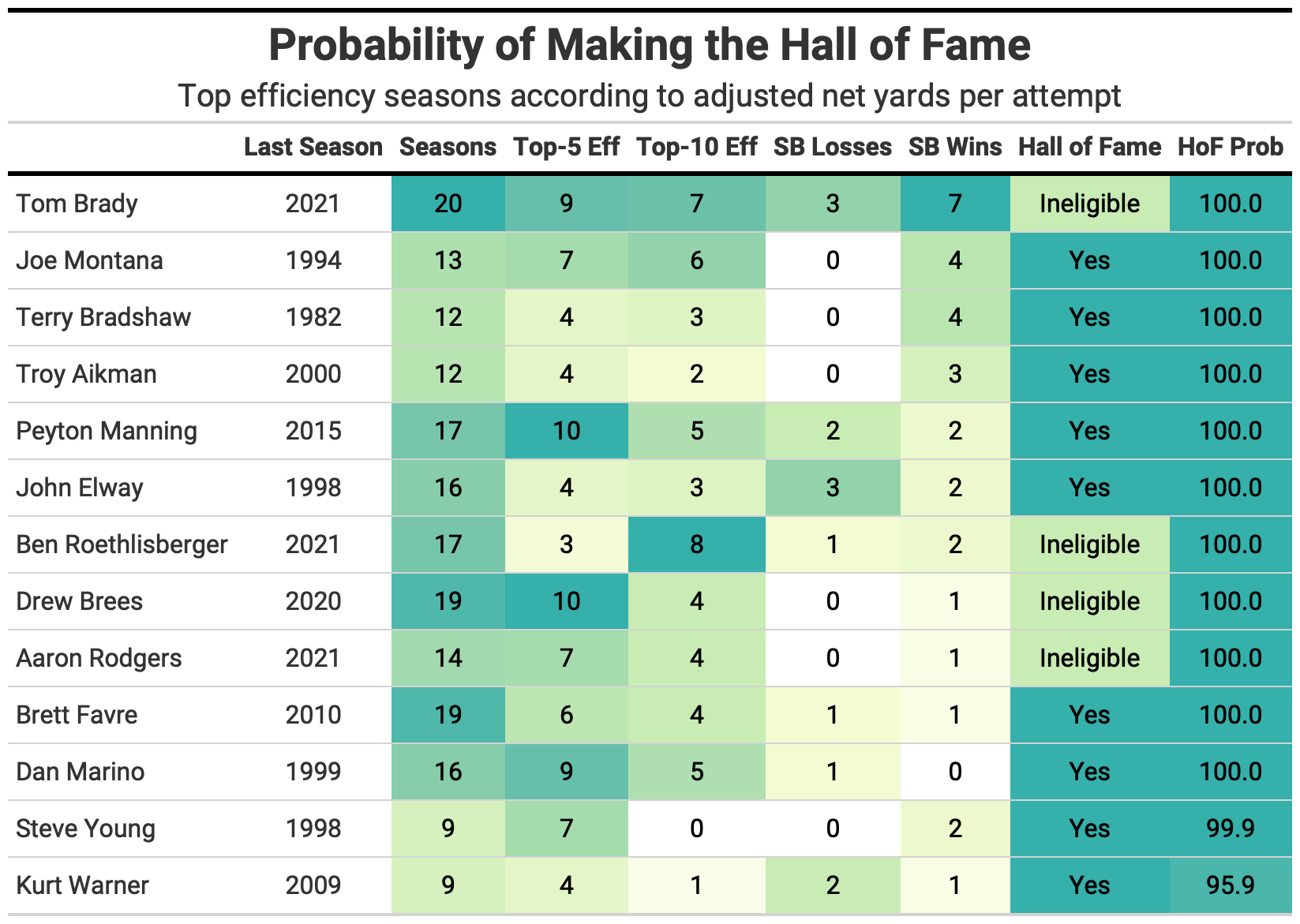 All of the quarterbacks in the table above had a model-based probability of Hall of Fame inclusion at or above 95%, and every eligible signal-caller on the list has indeed been inducted. Super Bowl wins are the most important factor in the model, and every quarterback in the table has at least one outside of Dan Marino, who produced a stellar nine seasons with top-five passing efficiency during his career, tied for the second-most of any quarterback. Marino adds another five seasons with top-10 efficiency, meaning he was at least a top-10 efficiency quarterback in 14 of his 16 qualifying seasons.