Tampa Bay Buccaneers quarterback Tom Brady has aged like a fine wine. He just won a Super Bowl at age 43 and signed a virtually guaranteed contract that will keep him in Tampa for his age-45 season.

Of course, not all players age as gracefully as the G.O.A.T., and this begs a couple of questions: How fast does the average NFL player age, and how does it vary through different positions?

With the first wave of NFL free agency all but over, the offseason needs for all 32 NFL teams set in stone and teams well into 2021 NFL Draft preparation, we want to use this article to investigate these questions.

Beware of the selection bias

Any analysis centered around aging can be deceiving, as there are several biases one can fall for when looking at the data.

If we consider efficiency — let’s use PFF's Wins Above Replacement (PFF WAR) per snap as a unifying efficiency metric across all positions — we can use the following chart to display WAR per snap against age. The result is not only that NFL players become better over time, but there is also a huge spike starting after age 35. 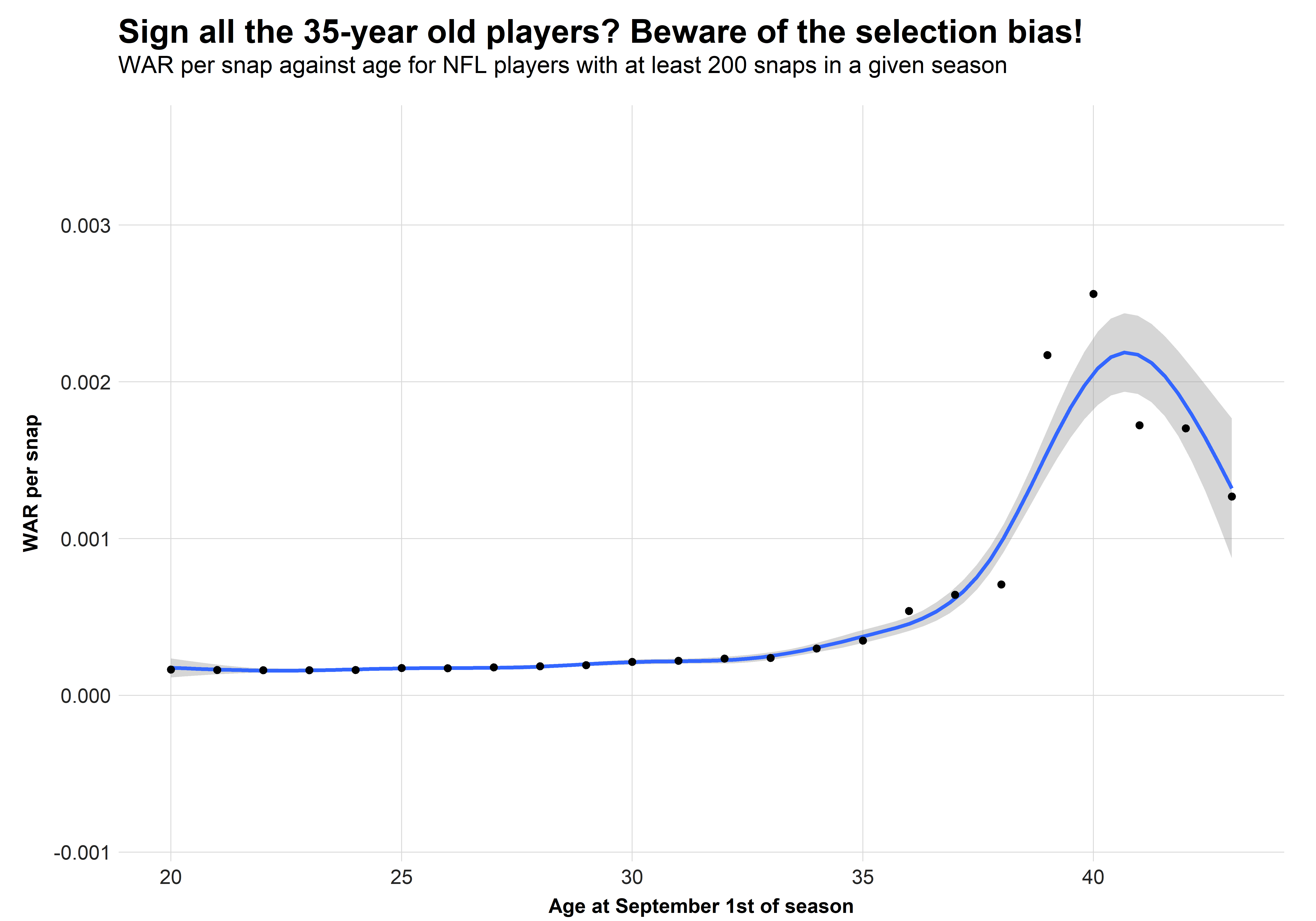 So, what is happening here?

Thus, the data at the right side of the chart is dominated by quarterbacks, and they generate more WAR per snap than other players. That’s especially true for older ones, as it’s very unlikely that a bad quarterback gets to play 200 snaps while being closer to 40 than 30. Most “bad” quarterbacks are already out of the league by then.

Ok, so quarterbacks skew data. What if we look at the same chart with quarterbacks excluded? Did we remove any bias? 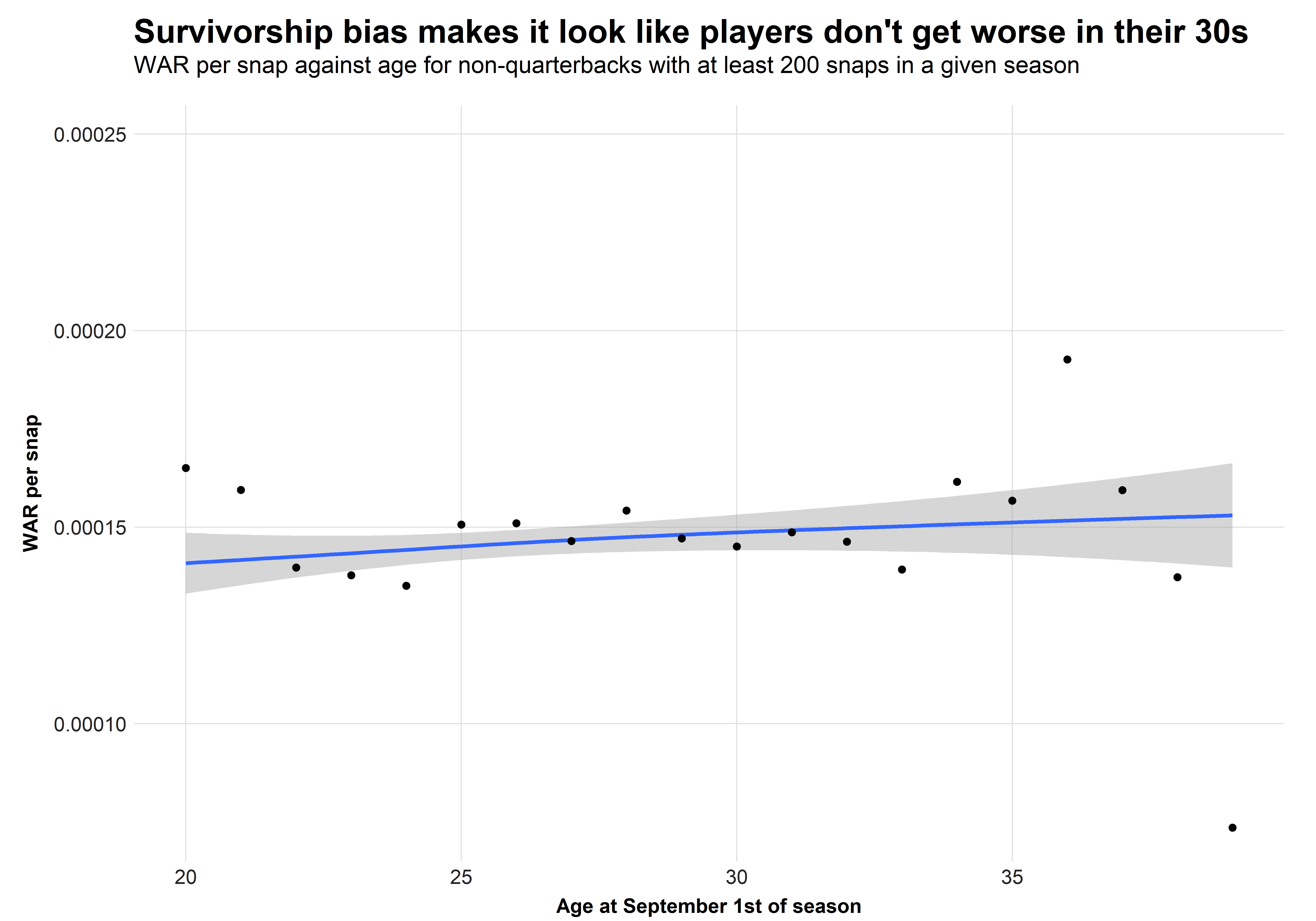 Apparently not, since the aging “curve” shown here still defies everything we know about the human body and NFL players out of their primes.

You might have already guessed it: The problem is survivorship bias. Players who are still playing 200 snaps in a season beyond age 30  are probably really good. Meanwhile, the set of players who play 200 snaps at the age of 25 or younger can contain either bad players living off their early-round draft pedigree or players who aren’t very good but see significant snaps because they are cheaper than their veteran counterparts.

Therefore, we are going back to the drawing board.

How do we solve this problem? After all, we don’t have the kind of data that measures the aging process directly, as we would for something like athleticism.

Hence, our best proxy for the aging process is mixing the quality of play on the field with the number of snaps. The latter lets us incorporate four different effects that come with age:

Luckily, PFF has a metric that can be used across positions and describes both qualities of play but also depends on volume: PFF WAR.

For each position, we will look at the percentage of the total WAR generated by players of a given age. The age when this percentage starts to decrease significantly can be considered the start of a process that will gradually put a player out of his prime. 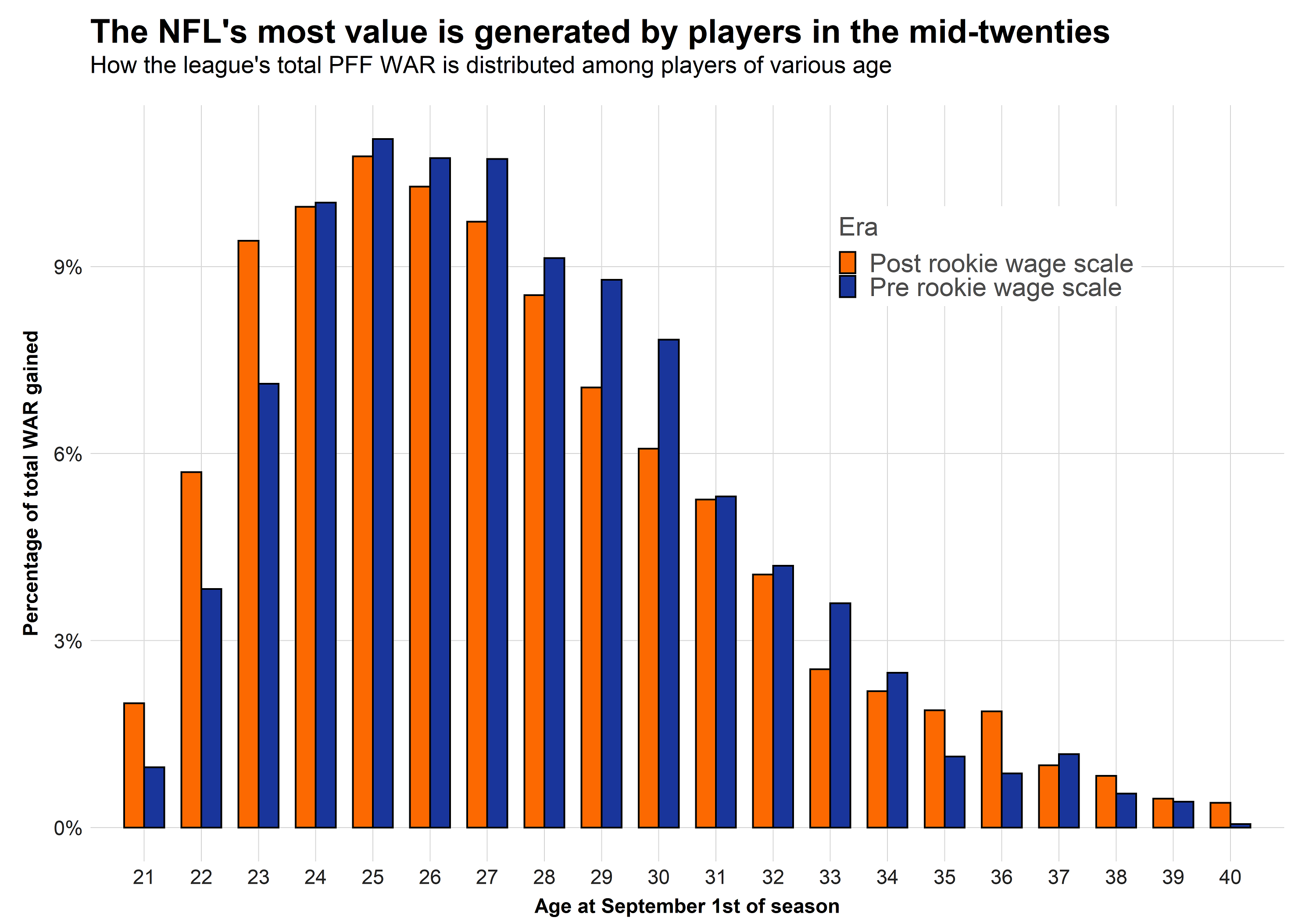