While a handful of teams still have Super Bowl aspirations, the rest of the league and its fans are preparing for the offseason. PFF is also getting into the action with the launch of its 2022 Draft Guide and free agency ranking tool, which allows you to sort by position or team needs and includes OverTheCap contract projections as well as historical grades and wins above replacement (WAR) numbers for the past three seasons.

This article is part of a series going through PFF's top-ranked free agents (excluding QBs) by position group, using their past stats to match them with historical players. Once we have a sample of similar players, we can see how they performed in subsequent seasons to get an idea of the current player’s range of outcomes. I’ll also include any potential bargain free agents who aren’t at the top of our rankings but look better than expected in WAR projections.

For each of the wide receivers below, the closest comparable players were found by measuring the similarity between them based on several features — age (within one year), weight, WAR, previous-year WAR, WAR per snap, air yards per target, targets per game and PFF receiving grades.

The first plot shows the relevant WAR numbers for each of the wide receiver’s closest comparisons, the next displays past and future performance for the free agent based on the comparisons, and the final table shows the dollar values based on positional WAR baselines for each outcome (expected, ceiling and floor) through 2022.

I decided to restrict the forecasts to the next two years in order to maximize the number of comparable players we have in the dataset, reduce error for longer forecasts and reflect the fact that all but the NFL's top-tier free-agent contracts are glorified two-year deals that give teams the option to continue.

Comparable players for Adams are elite NFL wide receivers. Julio Jones, Andre Johnson and Antonio Brown had some of the most valuable seasons in the PFF era (since 2006), but their results didn’t always maintain over the age equivalent seasons while looking out two years.

This season was Adams’ eighth in the NFL, and he’ll turn 30 years old during the 2022 regular season. Receivers can be productive well into their 30s, but each additional year raises the risk of an age-induced decline. 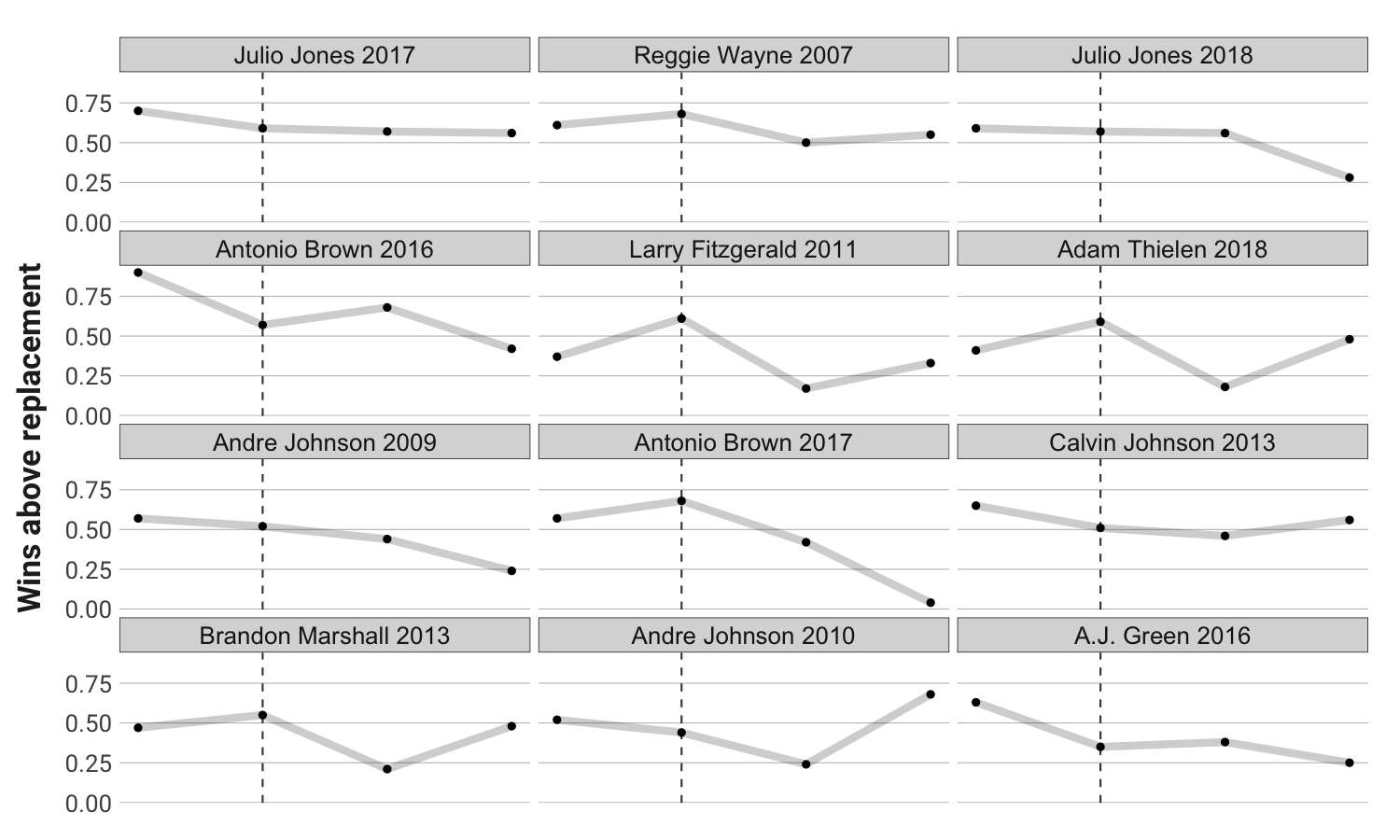 It’s fair to view Adams’ comparison-based WAR projections skeptically. In a way, he’s a victim of his own greatness. Adams' production has set such a high bar over the last two years that any group of similar historical players is going to have trouble matching it. The good news is that a half-win of value is still significant and well worth a top-notch contract. 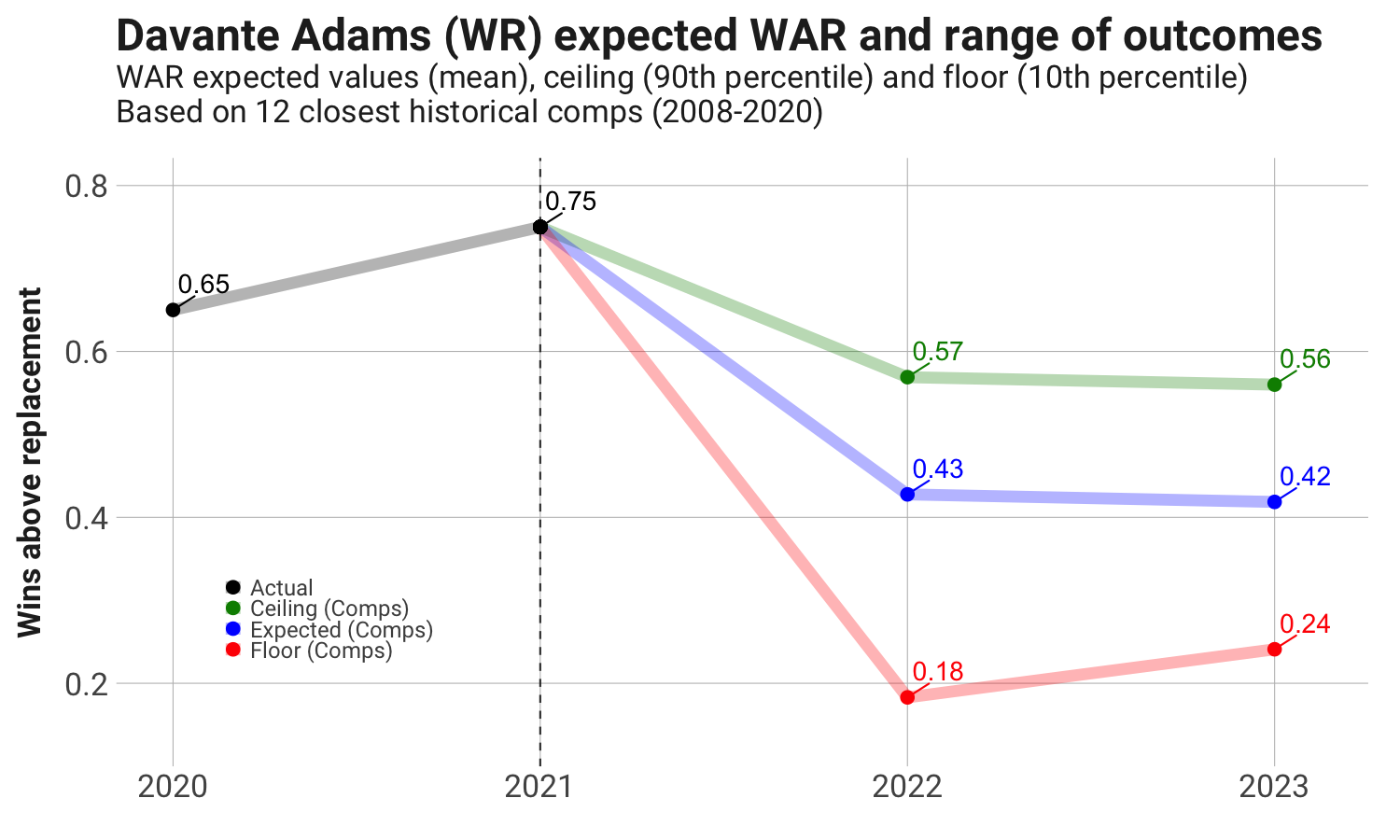 Adams should sign for around $23 million per season if he signs a long-term contract, though there is a possibility the Green Bay Packers use the franchise tag instead. A contract in that range aligns with his expected value over the next two seasons.

Godwin’s comparisons are a mix of good and great players, which is partially a reflection of muted WAR numbers that Godwin has compiled while missing multiple games the last two seasons. At 25 years old, Godwin likely has a number of quality NFL seasons in front of him, but he’s displayed less upside recently than many would have predicted a couple of years ago. 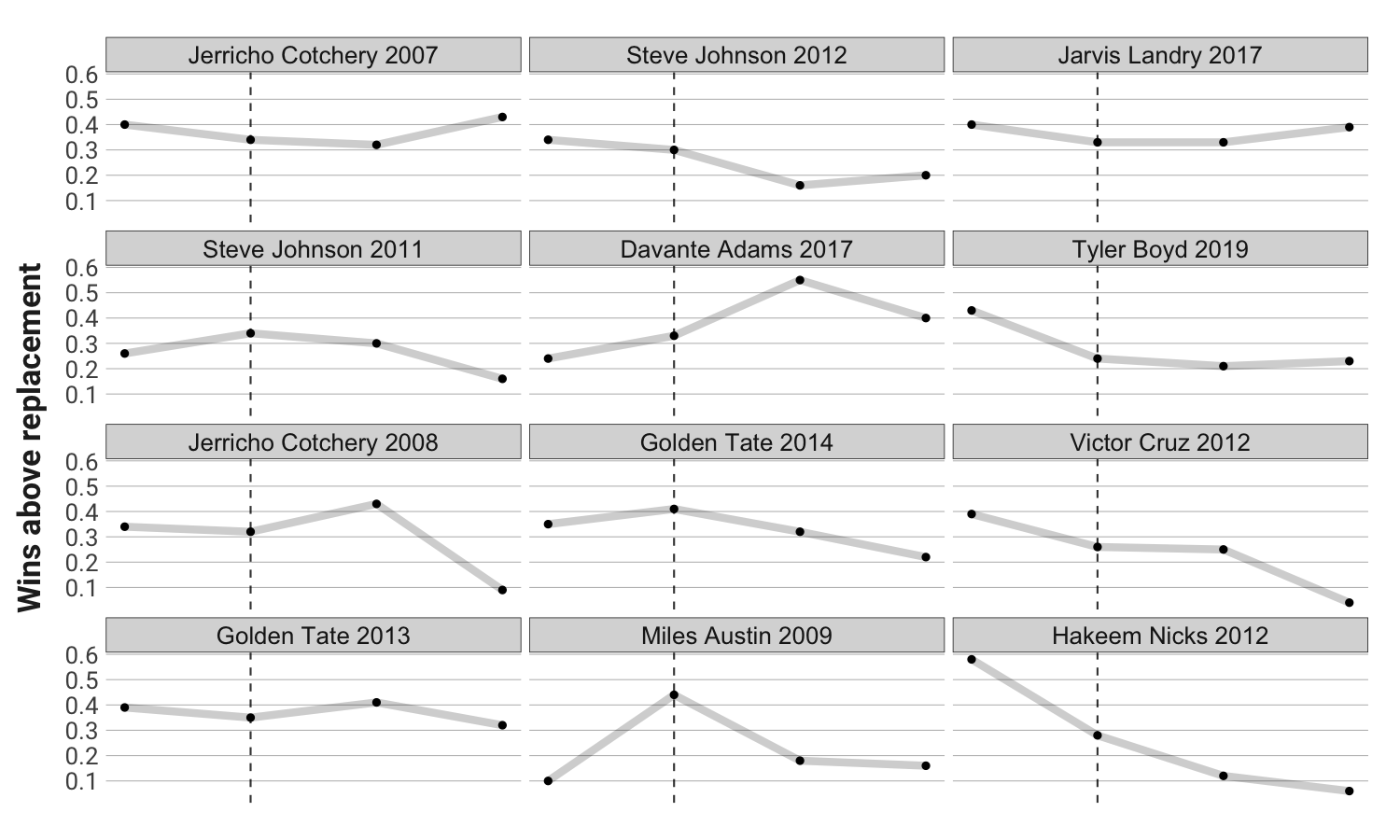 Godwin’s WAR projections aren’t much worse than his 2021 production, and he has a fairly wide range of outcomes.