A decade after star QB Russell Wilson entered the league as a third-round pick, the Seattle Seahawks did the unthinkable: They traded Wilson to the Denver Broncos after eight playoff appearances in 10 seasons and almost 300 touchdowns.

Wilson joins a Denver roster overflowing with skill-position talent opposite one of the league’s best defenses. Even in a stacked AFC West, the Broncos are expected to compete for a Super Bowl with Wilson in tow.

But the Russell Wilson heading to Denver is not the same quarterback as the one who beat out Matt Flynn during training camp in 2012, started Week 1 and hoisted a Lombardi Trophy in Year 2.

Though Wilson has consistently been one of the game’s top QBs over his decade-long career, his playstyle abruptly changed in 2016, leading to a spike in both aggressiveness and efficiency.

Let's examine the type of player Wilson is at this point in his career and what his evolution means for the Denver Broncos.

How valuable was Russell Wilson to Seattle, really?

Using PFF Wins Above Replacement (WAR), we can see that Wilson has added around 3.0 wins above a replacement-level quarterback per season. That is more than enough to decide whether a team makes the playoffs.

Since being drafted in 2012, Wilson has helped generate incredible amounts of expected points added (EPA) for his team. This number has been steadily increasing. We can see the slope of Wilson’s graph jumps quite a bit during the middle of his 2016 season.

From there, if we were to plot the derivative, we could see he was gaining EPA faster than most, if not all, other quarterbacks in the league. 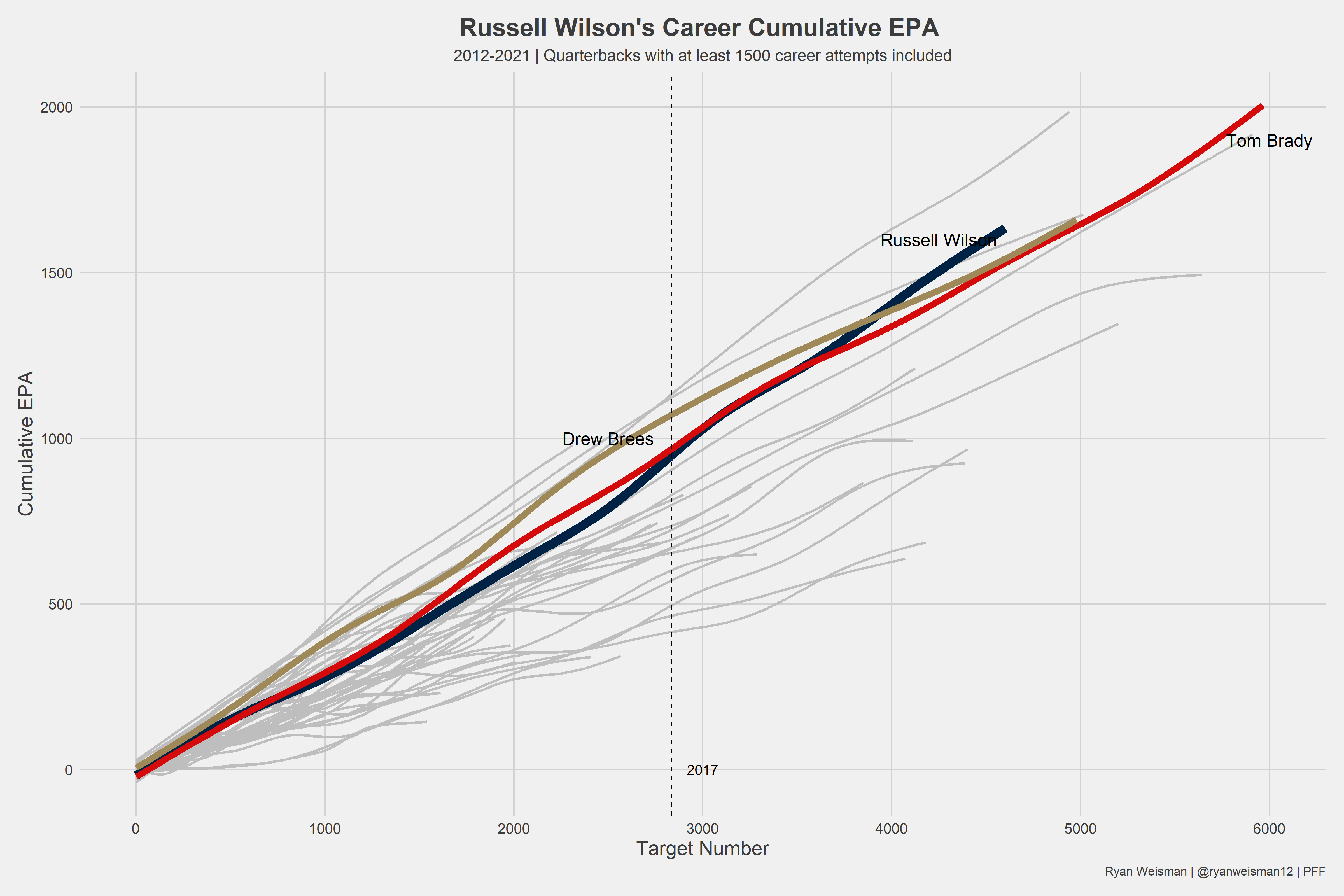 Let’s compare the first half and second half of his 2016 season to see if we can pinpoint why his EPA jumped so drastically.

Toward the second half of the 2016 season, Wilson became a lot more aggressive, throwing deep balls at a rate of almost 14% with an aDOT of 10.33. These changes essentially stuck going forward. 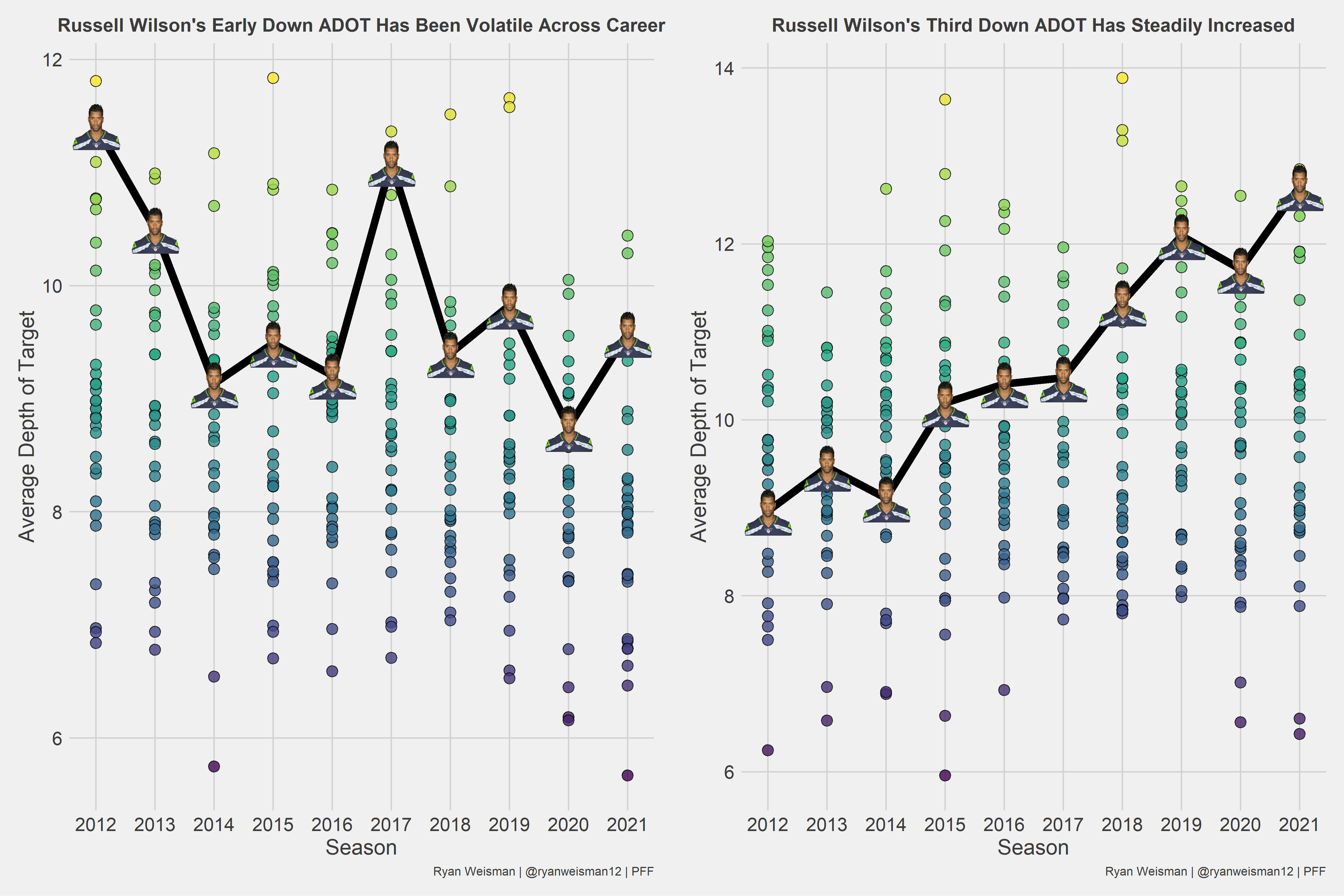 Has his aggressiveness translated to third-down success? 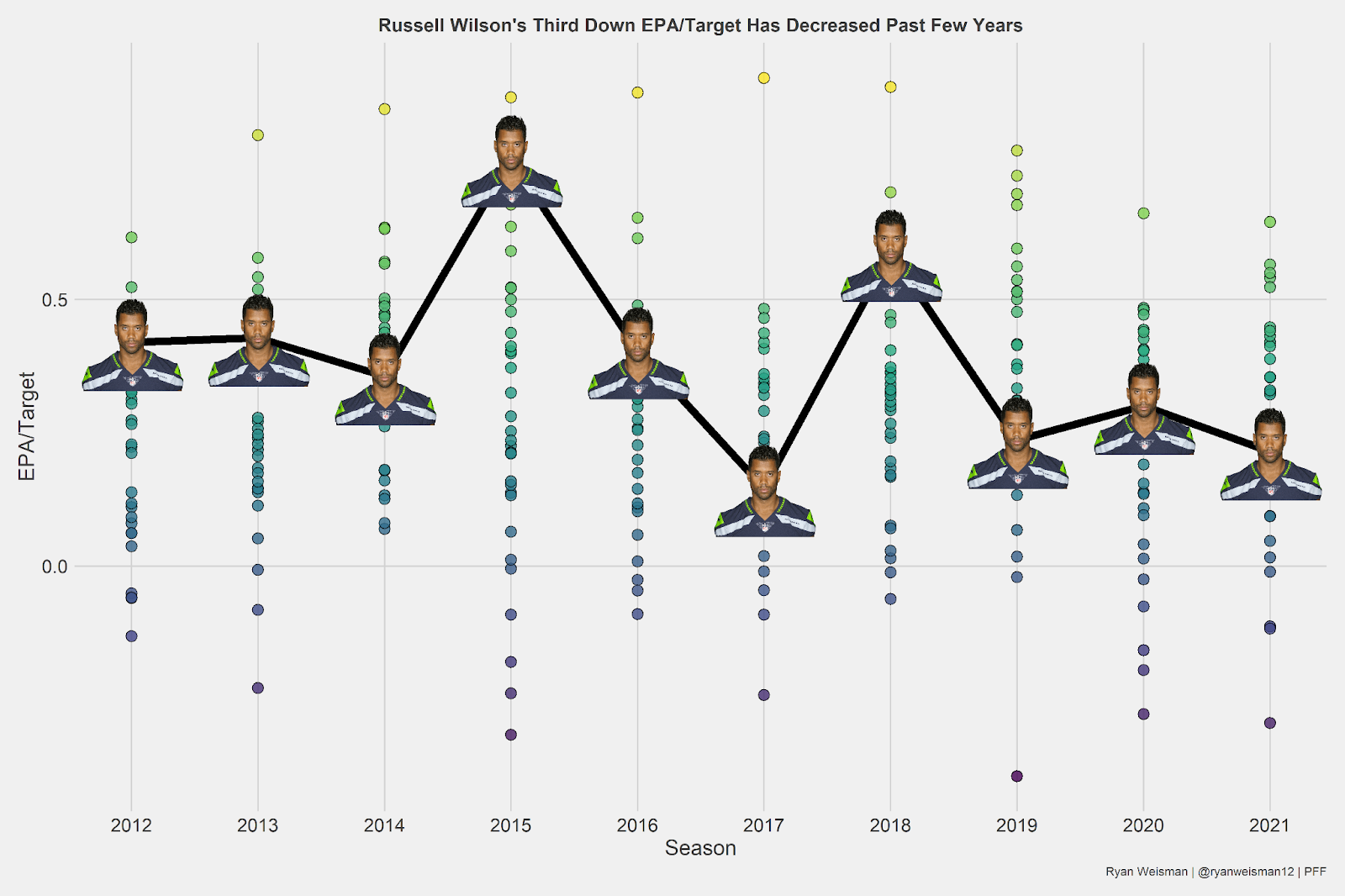 It has not. Since 2019, Wilson’s passing success on third down has been toward the middle of the table. There is minimal to no correlation (R = 0.35) between third-down aDOT and third-down EPA per target, which means quarterbacks aren’t really hurting or helping themselves by throwing deeper on third downs.

But the fact remains that Wilson has been a more aggressive passer in recent seasons. Even without an increase in third-down efficiency, Wilson in 2019 posted a career-high single-season WAR of 4.60, along with his best-ever PFF passing grade of 91.1. These career-best numbers were fueled in part by a career-low 1.7% turnover-worthy play rate.

If Wilson is the same type of aggressive passer for Denver, it's possible for him to return another WAR over 4.0 under similar circumstances.

Wilson is an athletic player who can scramble when necessary, but he does so less often than earlier in his career. He is now less Kyler Murray and more Aaron Rodgers.

How exactly can we look at this? Obviously, a quarterback's playstyle is more faceted than how far they throw the ball or how often they run. To solve this problem, we can use K-Means clustering to assign quarterbacks to clusters based on their playstyle.

To achieve this, a variety of factors are taken into account and then translated onto a standard scale. The passing metrics used here are aDOT on both early downs and third down, the rate at which they throw deep balls, average time to throw and the side of the field they target the most.

There are better metrics out there, such as the rate at which quarterbacks throw to their first and next read, but the data on these metrics is limited and doesn't go back as far as we’d like.

We at PFF have used K-means clustering in the past. In November, Tej Seth and I used it to analyze the uniqueness of NFL defense coverage schemes.

In this exercise, we’ll use the process to find clusters of QBs grouped by playstyle. Each individual season for a quarterback will be assigned to a cluster, not the quarterback's career as a whole. 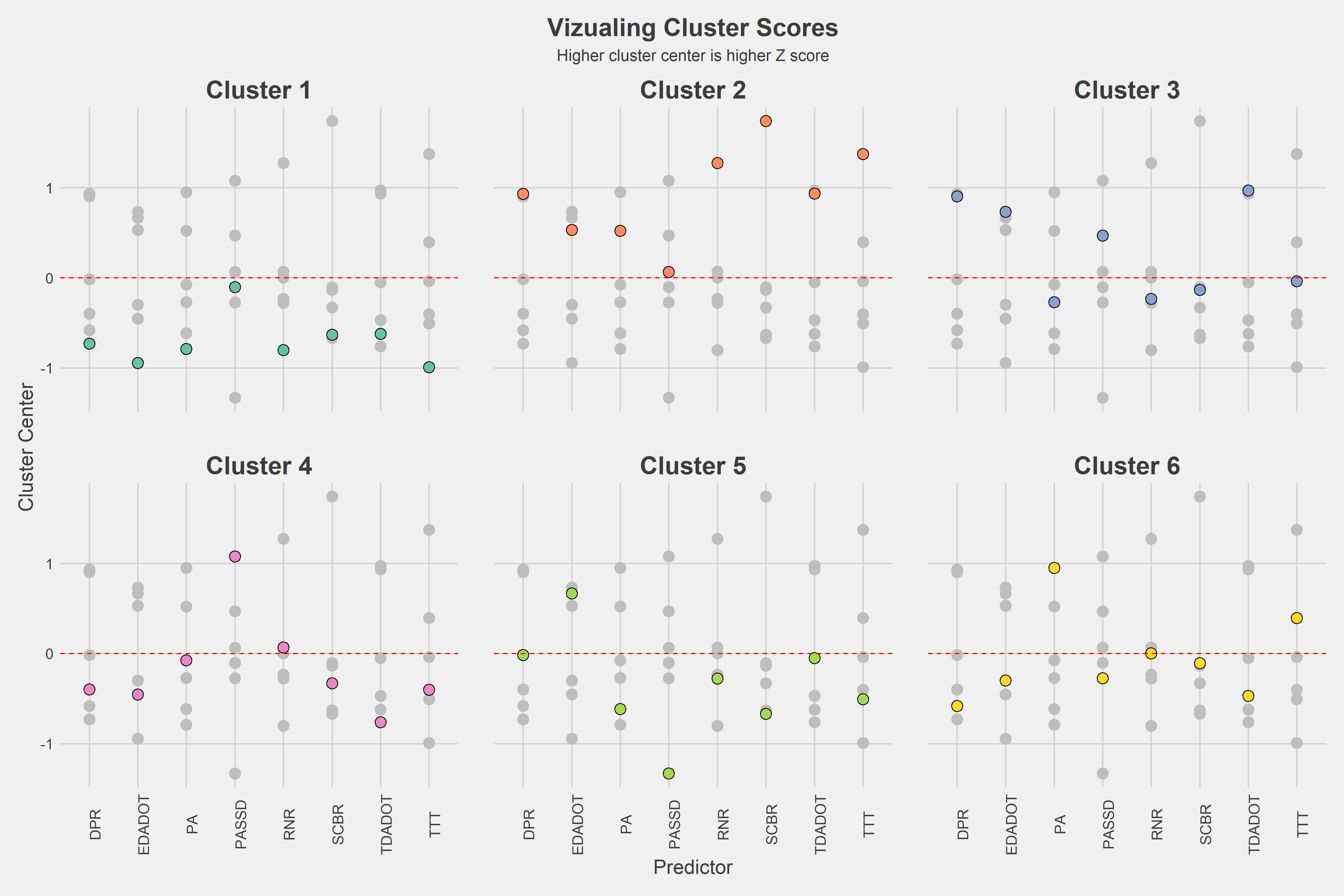 • Cluster 1: The conservative cluster. Low depths of target on both early downs and third down. Rarely scramble and generally pass to the center of the field. Drew Brees appears in this cluster every season since 2015.

• Cluster 2: Play-extenders. High scramble rates and above-average time to throw. Josh Allen in 2020 scrambled at a rate of 11% (third-highest) and his time to throw of 2.81 seconds was the fifth-highest.

• Cluster 3: Aggressive yet immobile quarterbacks; highest deep throw rate and the highest aDOT on early downs and third down. Carson Palmer in 2015.

• Cluster 4: QBs who throw to the right side of the field more than most while also being the most conservative on third down. Ryan Tannehil.

• Cluster 5: The opposite of Cluster 4 — QBs who throw to the left side of the field more than average while also being relatively aggressive on early downs. Tom Brady in 2017.

• Cluster 6: Average quarterbacks. High play-action rates and relatively high time to throw. However, they fall toward the center within the rest of the metrics. Matt Ryan has been in this cluster every year since 2016.

Wilson has remained in Cluster 2 for all but one year (2016) when he was in Cluster 5. This tells us that as Wilson has been progressing in his career, his playstyle has been getting closer to that of Aaron Rodgers and Matthew Stafford.

These are quarterbacks who have incredible arm talent but due to age have not been able to use their legs as effectively. For example, in Wilson’s early career (2012-2016), around 17% of pressures turned into sacks. However, toward the end of his time with the Seahawks (2018-2021), close to 21.5% of pressures turned into sacks. This illustrates that his ability to escape pressure is dropping off.