PFF Data Study: Coverage scheme uniqueness for each team and what that means for coaching changes

Defenses have tried a variety of different coverages and schemes to combat that. The Seattle Seahawks soared to relevancy in the “Legion of Boom” era by playing heavy Cover 3 Zone, while the New England Patriots have found success for over two decades playing man coverages such as Cover 0 and Cover 1.

Since there are various ways to line up in coverage, we can group the league's defensive schemes into six K-Means clusters. K-Means clustering takes a set of data points and aggregates them together based on similarity. This can be helpful for the NFL coverage analysis because we can take multiple coverage frequencies, put them into a clustering algorithm and see which secondaries play similarly. The features of each cluster are listed below: 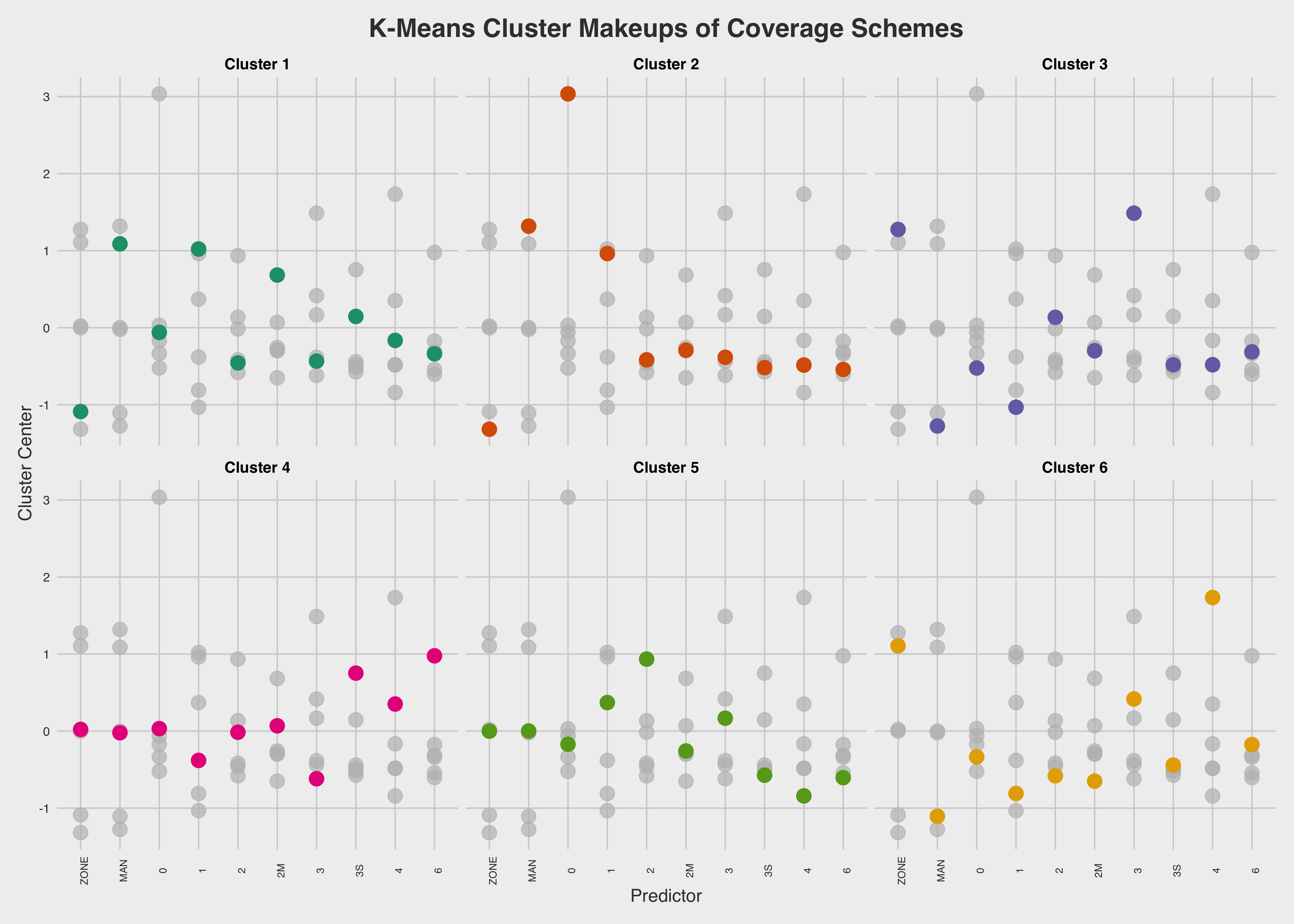 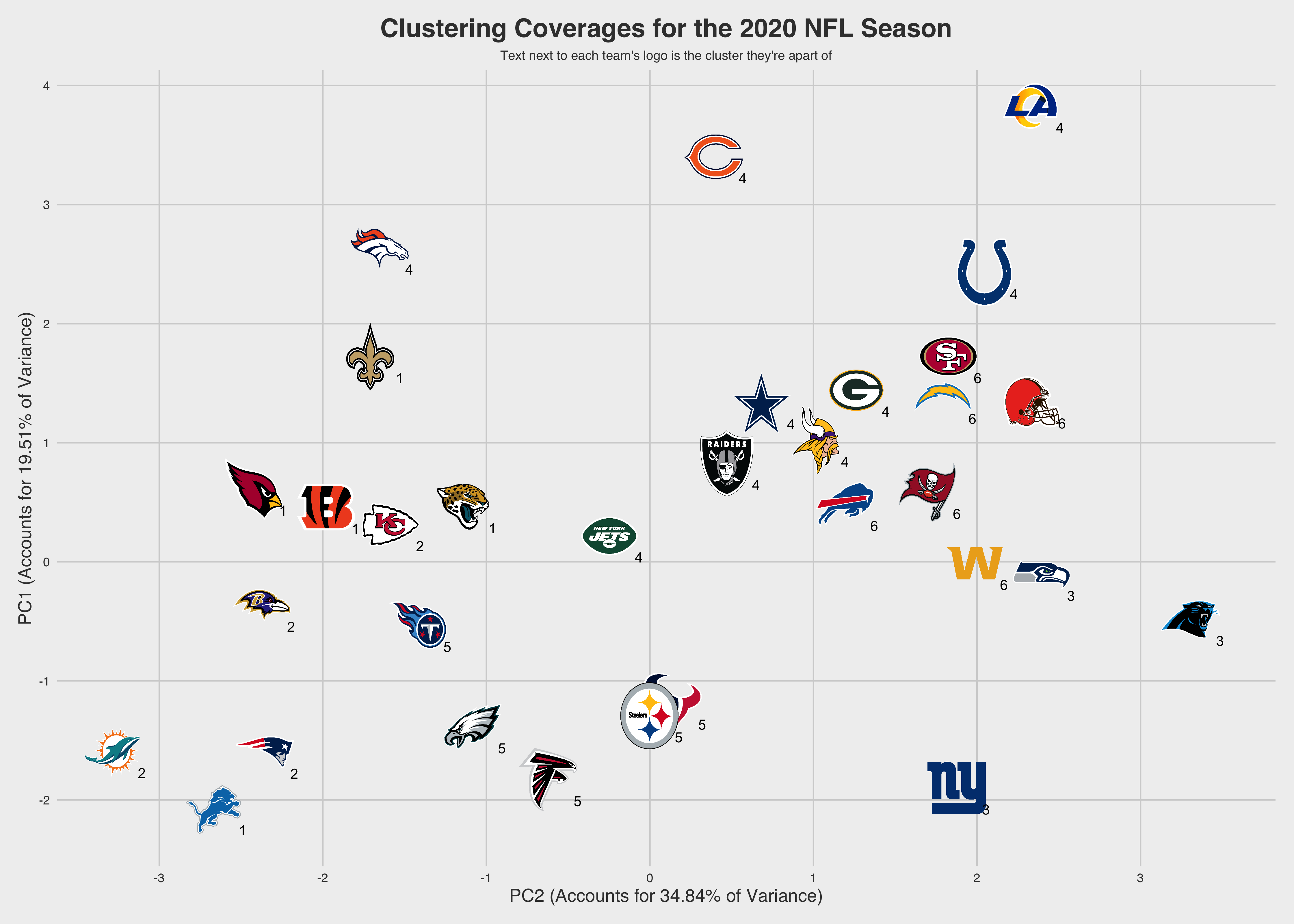 The “Bill Belichick tree” in the bottom left shows that the Miami Dolphins, Detroit Lions and New England Patriots featured a lot of man coverage, with Cover 0 and Cover 1. The “Vic Fangio tree,” with the Denver Broncos, Chicago Bears and Los Angeles Rams, is on the opposite side with zone coverage like Cover 4 and Cover 6.

That’s where we can create a new statistic called “coverage scheme uniqueness.” This statistic takes how far away a team’s PCA analysis is away from the origin. The more different a coverage is from the rest of the NFL, the higher their uniqueness score will be. 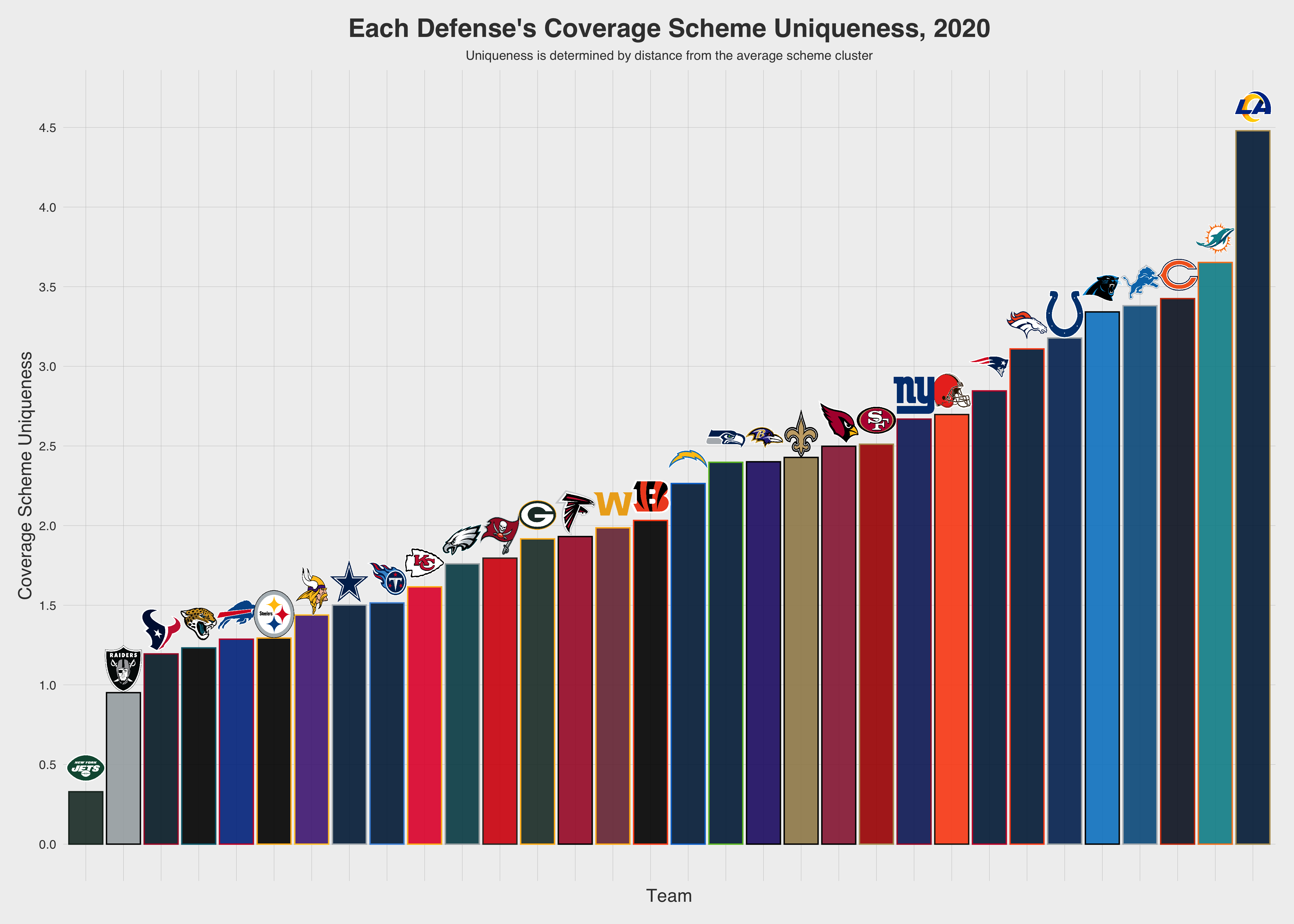 As mentioned earlier, Brandon Staley took a talented Rams defense, played a very unique sequence of coverages and finished with the No. 1 ranked defense in the league. On the other side, Gregg Williams’ Jets defense was the least unique, which might have contributed to him getting fired midway through the season. This prompts a deeper dive into those two teams' coverage usage.

Below is a side-by-side comparison of the most and least unique coverage teams, the Los Angeles Rams and the New York Jets, respectively. 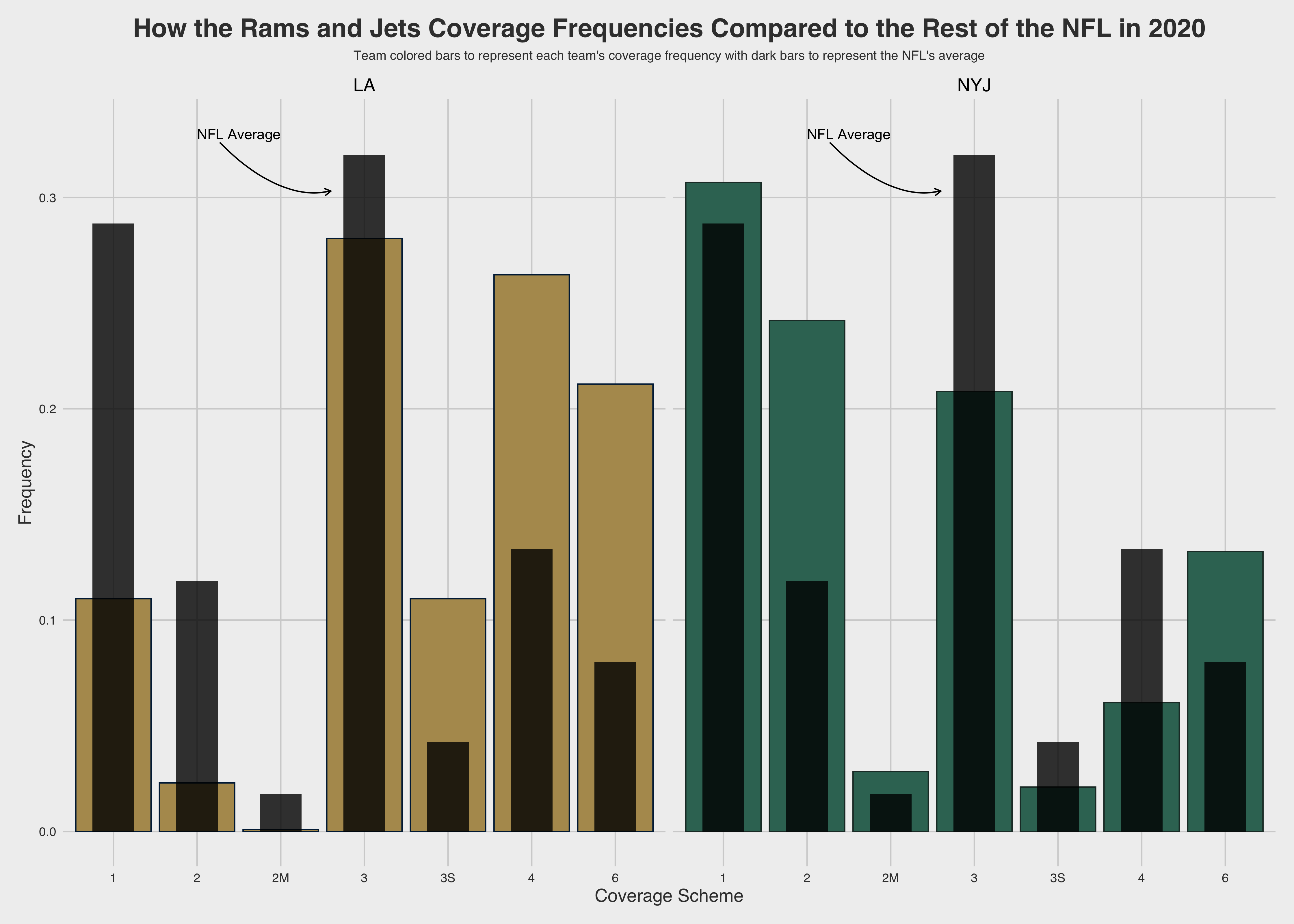 Because the Rams played Cover 4 and Cover 6 much more frequently than the rest of the NFL, this gives us an idea that coverage scheme uniqueness is heavily weighted on the frequency of uncommon coverages being used. Other teams’ coverage schemes can be explored on The Kneel Down, which uses PFF data to automate that process. 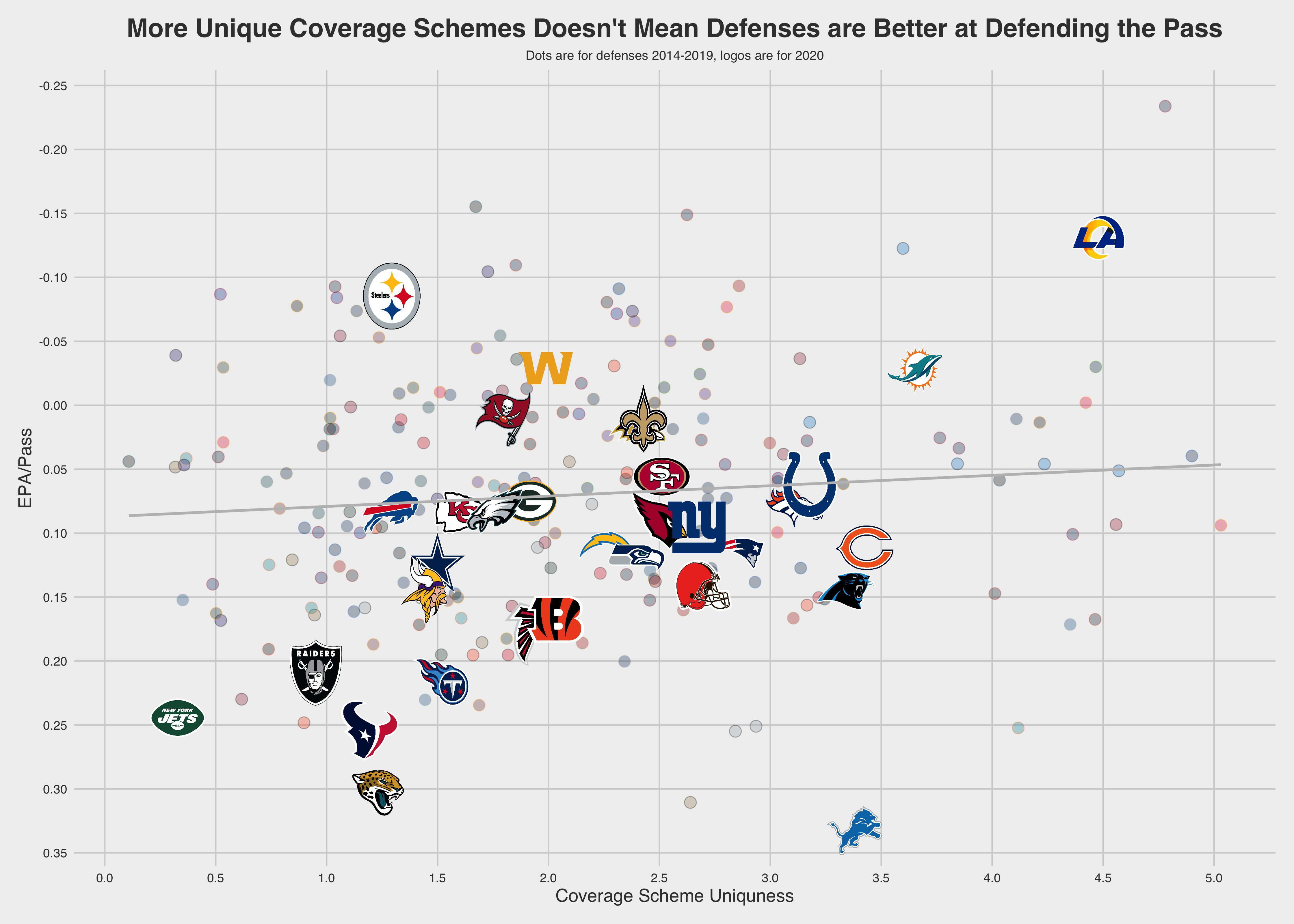 In this graph, the dots represent every defensive scheme since 2015 along with the logos plotted for 2020. The Rams and Dolphins fielded great pass defenses with unique schemes, while Pittsburgh, Washington and Tampa Bay relied more on the pass rush to stop opposing quarterbacks.

One of the more interesting case studies was that Matt Patricia made his coverage scheme less unique as the season went on in an attempt to save his job. Spoiler alert, it didn’t work: 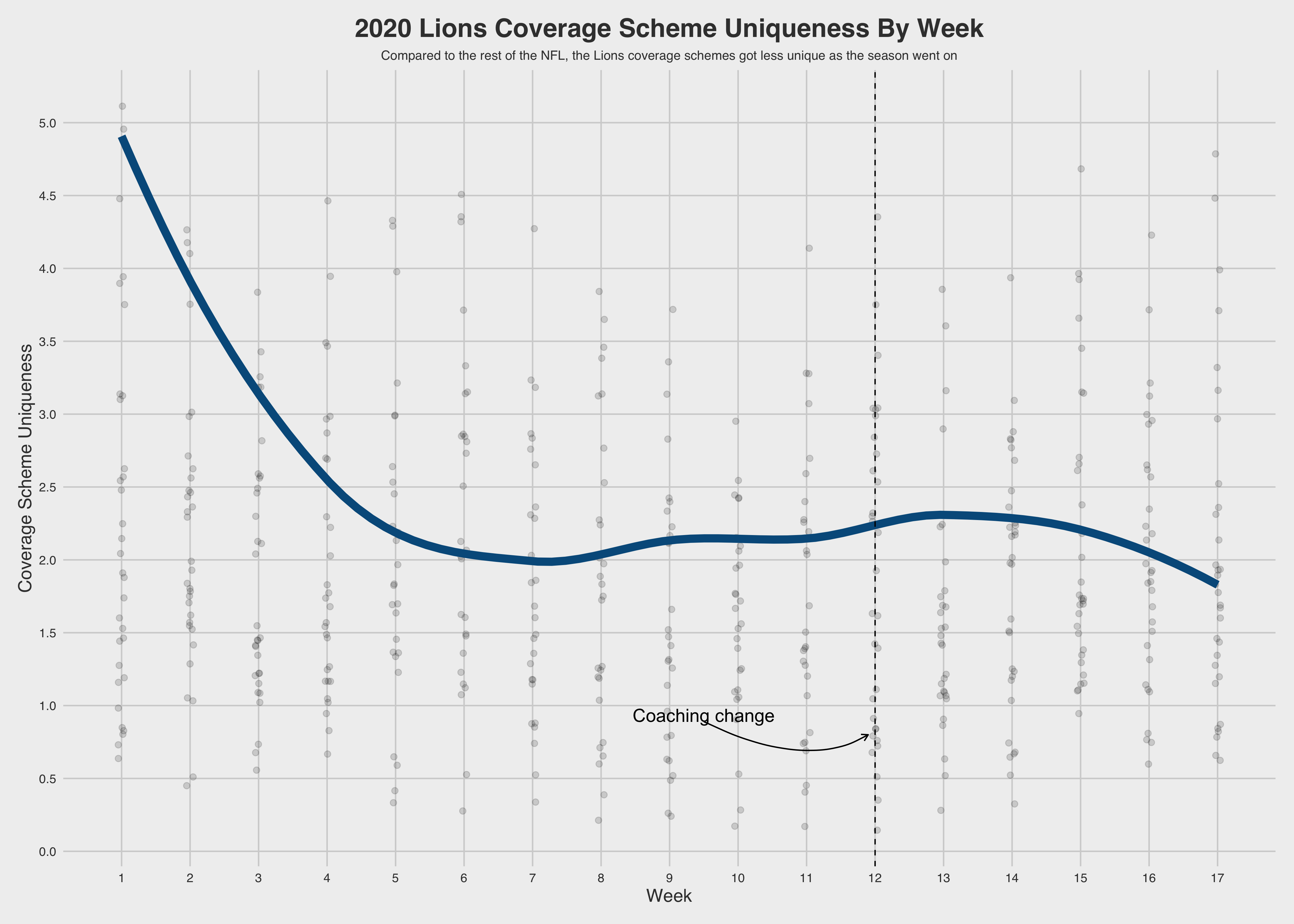 The Lions started 0-2 while playing zone coverage only 21% of the time during those weeks. They transitioned to a more common NFL defense, playing zone 48% of the time from Week 3 to Week 12, when Patricia was fired. The good news for Detroit — but the worrisome news for the Los Angeles Rams — is that scheme uniqueness is not stable when there’s a coaching change after the season: 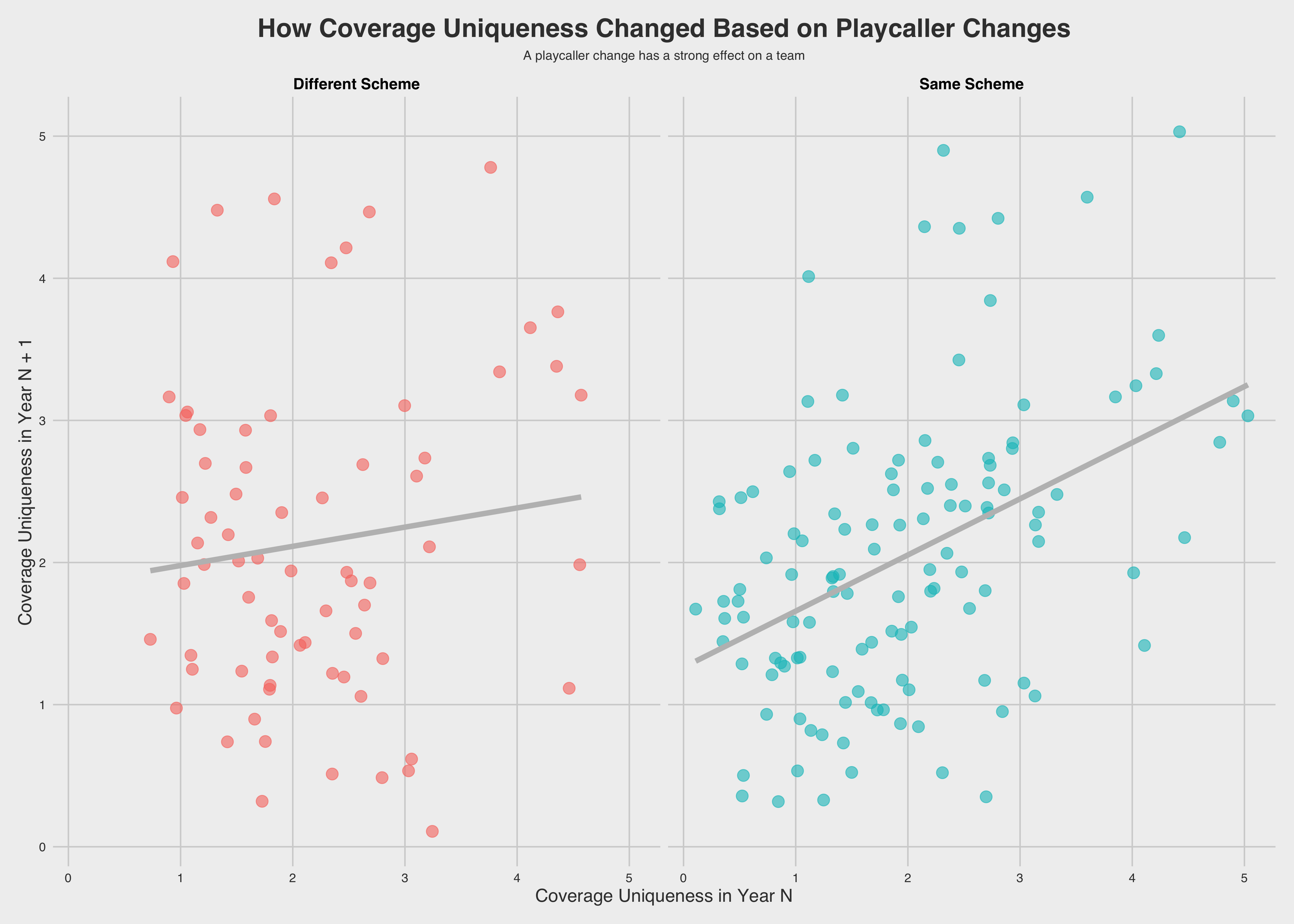 This makes sense, as schemes are largely controlled by the playcallers and not the actual players on the field. Of course, a good defensive coordinator should be able to adapt to the players they’re given, but there is not much evidence of that. If that was the case, “different scheme” would be more stable, and “same scheme” would be less stable.

Now that we have an idea of how much defensive coverage scheme uniqueness changes from season N to season N+1, we can look at how much it changes when there’s a mid-season firing: 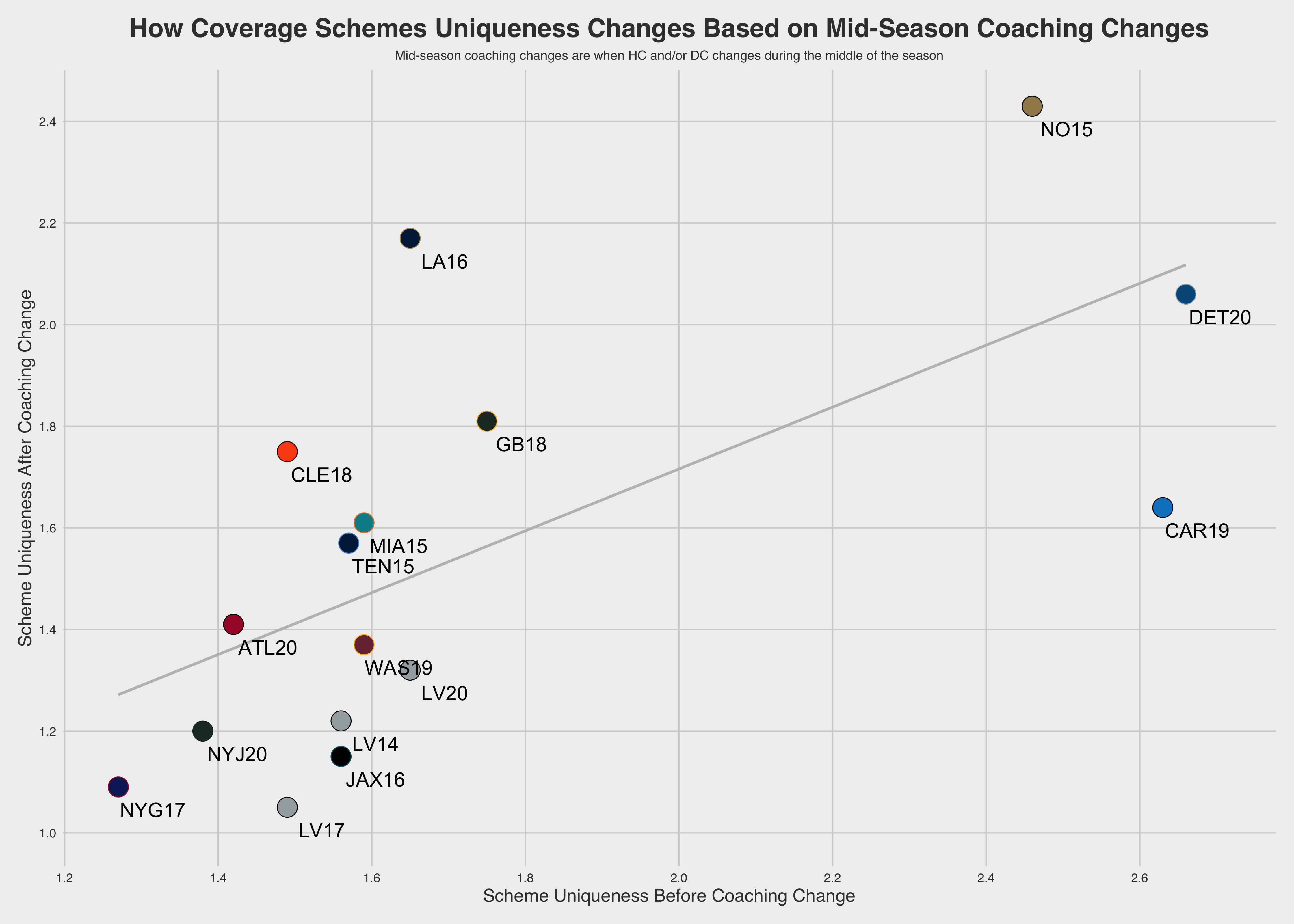 The Las Vegas Raiders appear on this graph three times in just seven years. They’ve tried and failed to run bland defensive schemes, and after a coaching change, their schemes get even more vanilla to finish out the season. This has contributed to the Raiders ranking 32nd in both EPA allowed per play and EPA allowed per pass from 2014 to 2020.

However, there are some really interesting outliers to look at, such as the 2018 Cleveland Browns: 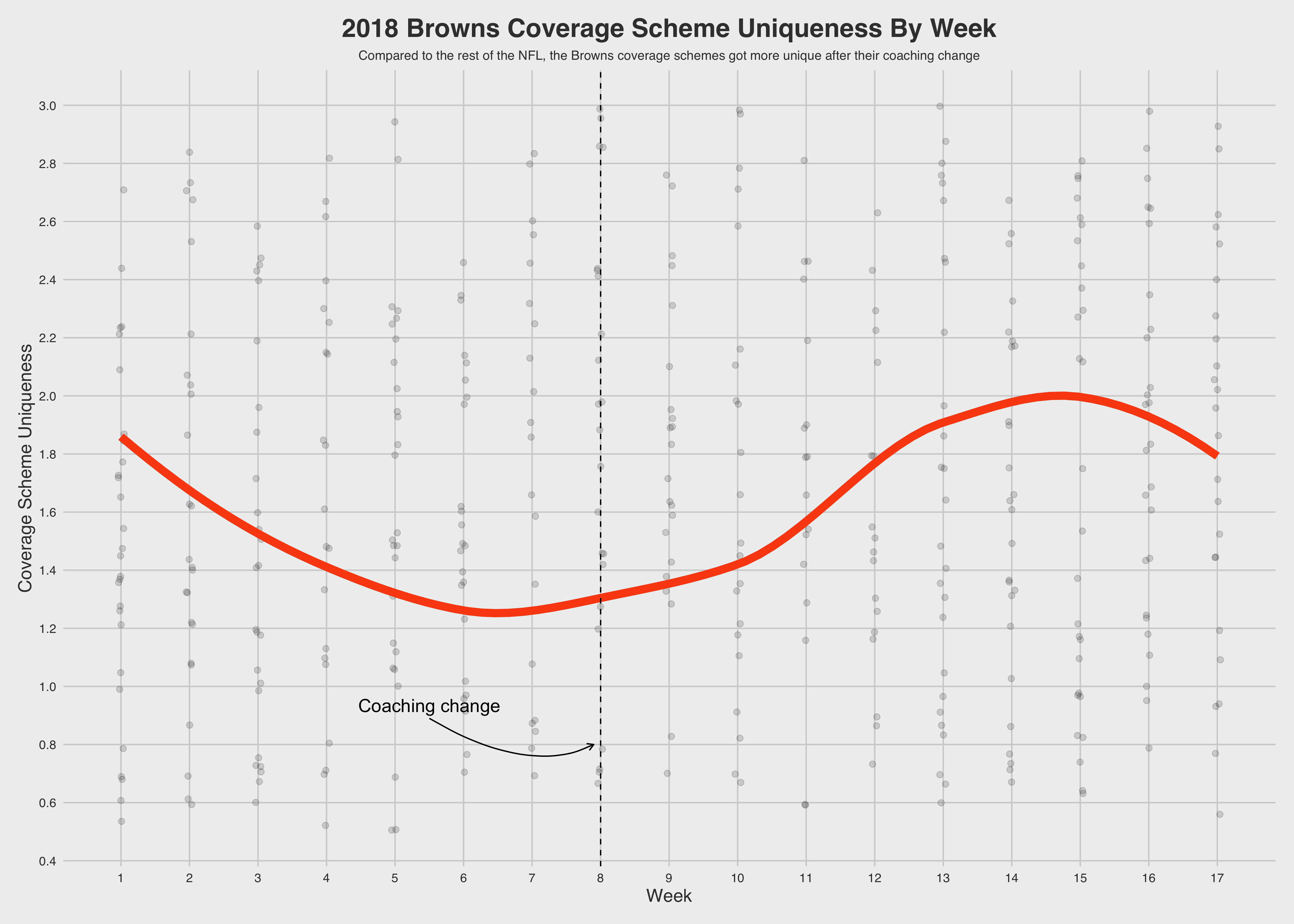 In her Big Data Bowl paper on maximum defender depth, Nicole Tucker used tracking data from the 2018 season to find that the Browns did some different things in the post-Hue Jackson era:

“During the first eight weeks of the season, with Hue Jackson as the head coach, the Browns’ last defender stood, on average, approximately 17.5 yards away from the line of scrimmage at the snap. In the back half of the season, with Gregg Williams as interim head coach, the average was down to 16.4 yards. This doesn’t seem like a significant difference, but combining this information with the consistent downward trend seen in the visual provides more insight into the bigger picture.”

The Browns’ scheme clearly changed from the first eight games of the season to the final eight. Their maximum defender depth moved closer to the line of scrimmage, and their zone rate dropped from 60% to 50% with interim coach Gregg Williams.

Coaching changes aren't the only thing that can change the uniqueness of the scheme. There’s also playoff Bill Belichick: 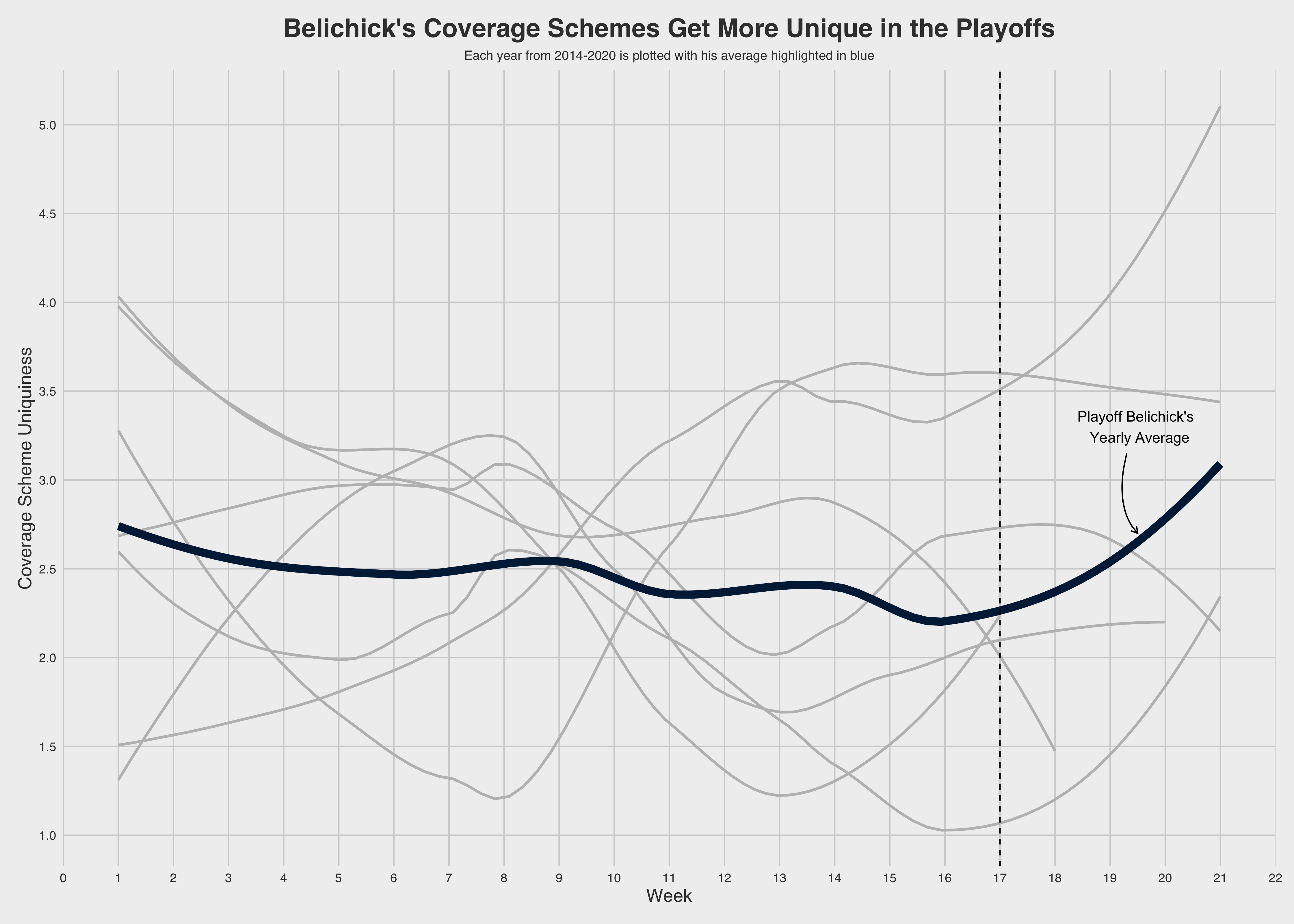 With each year’s coverage scheme uniqueness plotted in gray and Belichick’s yearly average in blue, we can see that he generally keeps his best cards hidden during the regular season and ramps up the unique coverage schemes during the playoffs. 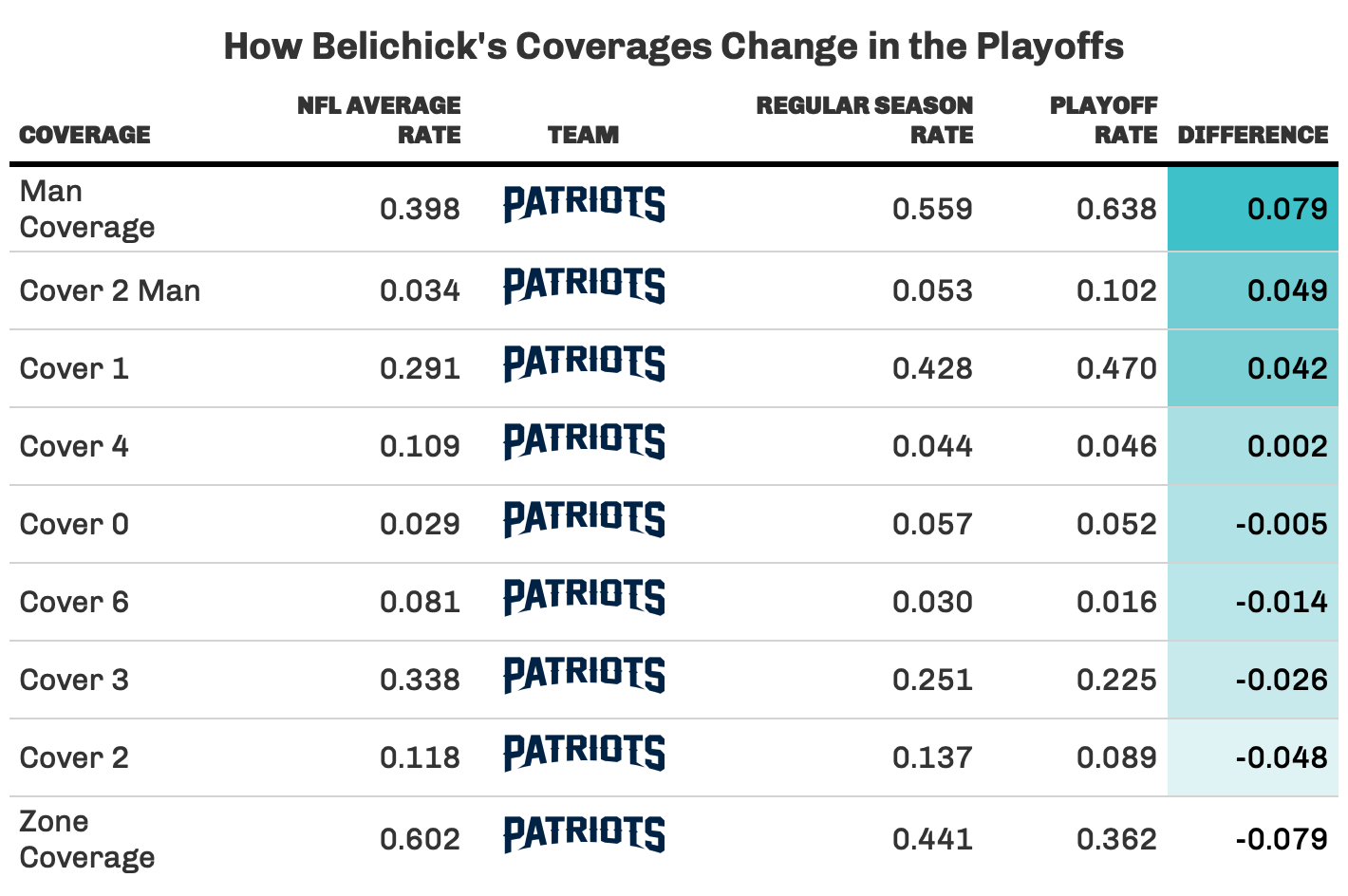 He does this by placing an emphasis on Cover 2 Man and Cover 1 while decreasing his use of Cover 3 (the most common coverage played in the NFL) and Cover 2. Between his ability to be unique each and every year and to cause opposing offenses fits, Belichick has shown why he is still the top defensive mind in the NFL.

Coverage scheme uniqueness is a great way to measure the innovation brought by each NFL defensive playcaller. Looking at Brandon Staley as an example: Throughout the season, there was a hunch he was an incredibly gifted defensive mind, and his uniqueness score proves it.

Of course, a scheme's uniqueness doesn’t necessarily make it a better defense. Staley showed that in order for defenses to succeed, they need a unique playcaller and talented personnel. That is why the 2020 Los Angeles Rams were so successful.