The Chicago Bears need to help QB Justin Fields, but Fields also needs to help himself

• An still-lacking offensive line: Chicago's front five has allowed pressure on 34.1% of pass attempts — the highest mark in the NFL — although injuries have decimated the unit.

• Holding onto the ball for too long: On perfectly covered plays, Fields takes sacks at the highest rate in the league.

• Fields not finding open receivers: He has been the league's worst quarterback on plays where at least one defender leaves a receiver open (0.17 EPA).

The Chicago Bears have been a puzzling team to follow this season.

On the one hand, they have claimed impressive victories over the San Francisco 49ers and New England Patriots, and they have lost by eight or fewer points in three of their five defeats. On the other hand, they have one of the lowest-graded quarterbacks in the NFL and an offense that ranks 27th in the NFL in yards per pass play.

Make no mistake about it, Justin Fields has been a big factor in the Bears' 3-5 record. His 51.1 PFF passing grade ranks 37th among 39 qualifying quarterbacks, and he has the third-highest turnover-worthy play rate at the position (5.3%).

He has also thrown just seven passing touchdowns, leads the league in sacks (31) and scrambles (38) from the pocket and has seen his WAR plummet to below league average over the past year.

But is Fields the only problem, or are there bigger issues in Chicago?

An offensive line pushed to the brink

PFF's Kevin Cole has recently shown that passers with a tendency to scramble have historically taken more sacks than quarterbacks who tend to stay in the pocket. And while that certainly holds true for Fields, the graphic below shows that he's also not had much help from his offensive line. 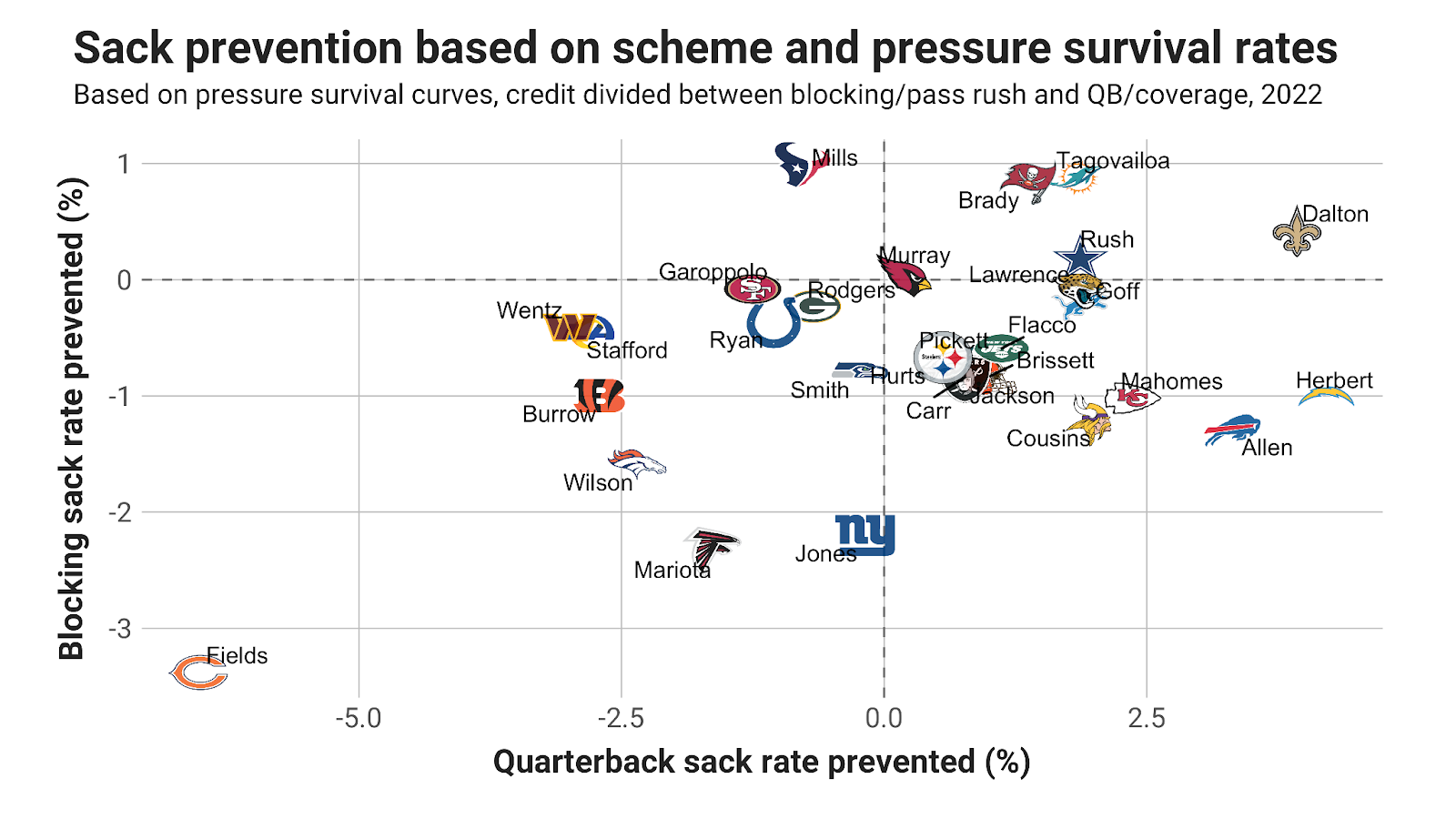 The Bears' offensive line came in at No. 31 on PFF's preseason offensive line rankings, and over the first half of the season, they've done very little to prove that initial assessment wrong.

Through eight weeks, Chicago's front five has allowed pressure on 34.1% of pass attempts — the highest mark in the NFL. Their 61.2 pass-blocking grade ranks 25th among the league's 32 offensive lines.

Granted, the unit has been plagued with injuries this season, with interior linemen Lucas Patrick, Dakota Dozier, Doug Kramer and Cody Whitehair all landing on injured reserve. Losing Whitehair was an especially significant loss, too, as the seventh-year pro was the seventh-highest-graded player at the position when he went down in Week 4. He was allowing pressure on only 3.8% of his snaps — a top-30 mark — and had given up no sacks or hits.

Still, it doesn’t help that Fields holds the ball for 3.43 seconds on average — by far the longest time in the league and well above the league average of 2.73 seconds. And as we know, there is only so much an offensive line can do when a quarterback holds on to the ball for that long.

A receiving corps in need of a star

And then there is the receiving corps that has put up a 63.0 receiving grade over the first half of the season, 30th among the NFL's 32 teams.

This season, passes to Bears receivers have netted just 0.014 expected points added (EPA) per play, the second-worst mark in the league. And those throws have resulted in completions just 58.5% of the time, which beats only the Denver Broncos (57.6%) and Carolina Panthers (55.8%).

Their struggles have not been due to opposing defenses, however, as the Bears' offense has faced the second-lowest rate of perfectly covered plays in the NFL through eight weeks.

A defense that can't keep up

The Bears have struggled on defense, as well, grading as the third-worst defensive team in football. They have allowed opposing teams to convert to a new set of downs or score a touchdown on 31.4% of plays, 23rd league-wide, while their 0.024 EPA allowed per play ranks 25th.

Struggling down the field and questionable decision-making

Through eight weeks, Fields has recorded only five big-time throws. Five different quarterbacks have hit that total in a single game this year, and Buffalo Bills quarterback Josh Allen leads the league in big-time throws on the year, with 20.

But it's not for a lack of trying. In fact, the Bears quarterback has thrown 20 or more yards downfield on 17.6% of attempts this season, the highest rate among starters. The problem is that he has one of the worst completion percentages (28.6%) in the league on deep passes, in large part because 53.6% of them have been charted as uncatchable.

And then there is the decision-making in short-yardage situations — when the Bears do pass the ball. So far, Fields has passed on just 25.5% of plays where the offense needs three or fewer yards to move the chains, and he often chooses to pass to lose yardage on these plays.

That is a recipe for disaster. 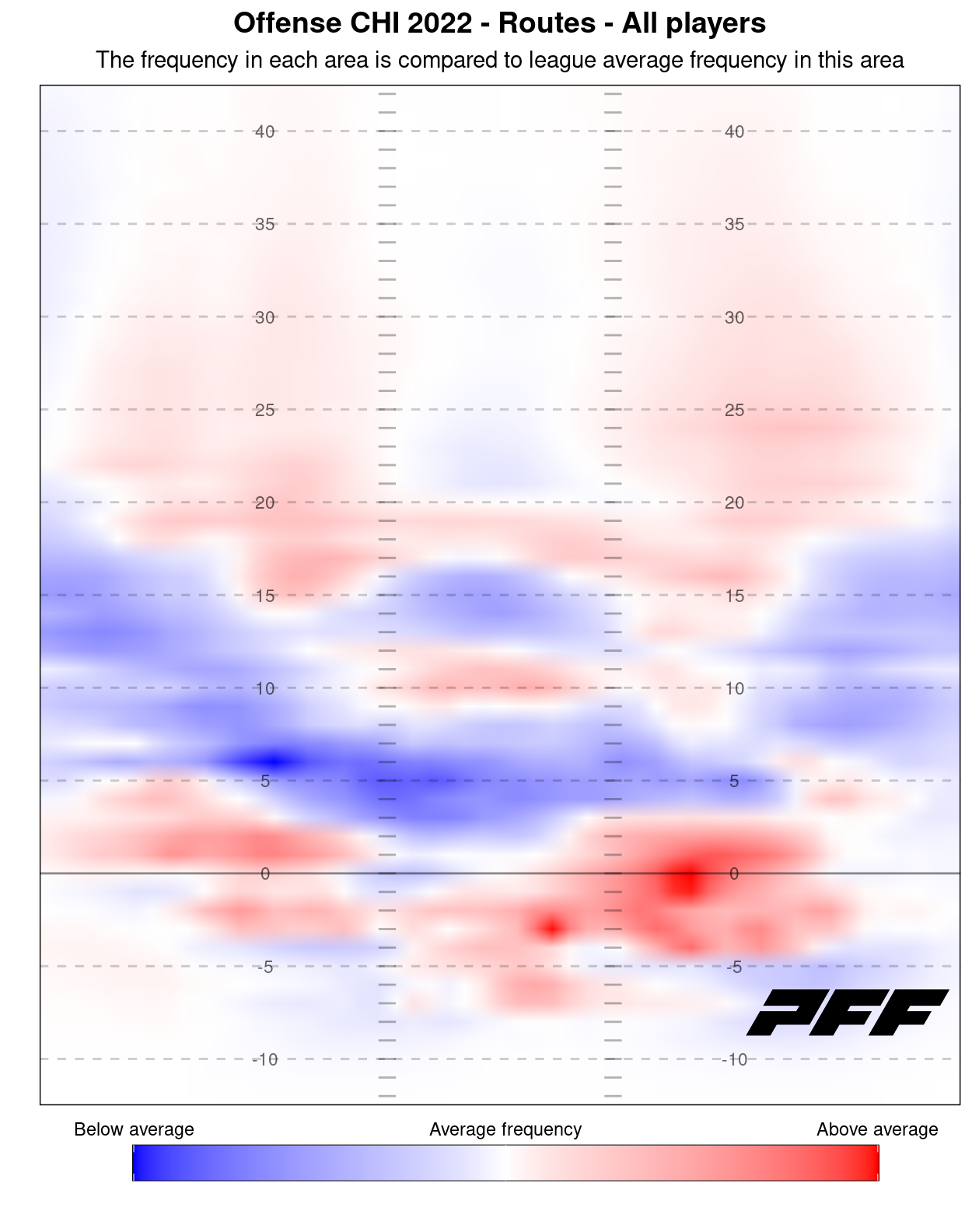 Now that we’ve looked at Fields and the Bears team as a whole, we’ll use analysis on perfectly and imperfectly covered plays to see how Fields has performed when the defense has both locked up every pass-catcher and when they have made mistakes in coverage.

The Bears' offense has faced the second-lowest rate of perfectly covered plays in the NFL, at 26%, eight percentage points lower than the league average. This should be a testament to a strong receiving corps that does well to get open, but the truth is that Fields just isn’t finding the open receiver.

On perfectly covered plays, Fields throws the ball 60% of the time, which ranks last in the NFL by over eight percentage points. Instead, Fields opts to take sacks, and he does so at the highest rate in the league.

The Bears passer generates -0.55 EPA against perfectly covered plays, 25th in the NFL. Behind only Mac Jones, Fields is the second-worst quarterback in terms of EPA when throwing into perfect coverage.

Looking at the above stats, he’s better off just throwing the ball away, which is shocking since scrambling usually results in the most EPA.

Let’s now look at how Fields and the Bears’ offense performs when at least one defender makes a mistake, therefore creating a non-perfectly covered play.

Again, Fields has been the league's worst quarterback on plays where at least one defender leaves a receiver open. His 0.17 EPA in such situations ranks last in the NFL among starting quarterbacks, and he also takes a sack more than 15% of the time — 10 percentage points higher than the league average.

He’s held onto the ball too long and has missed the open receiver, especially so considering the Bears' offense faces non-perfectly covered plays 74% of the time. Maybe new target Chase Claypool will give Fields more options, but can he take advantage?

The Bears' offense ranks seventh-worst against man coverage, which could be a testament to their lack of elite receiving options, a problem exacerbated by losing Allen Robinson II in free agency this past offseason. Chicago is, however, far more productive against zone coverage, although not at the same level as the league's top teams.

The Bears interestingly perform better against man coverage when they are facing a defense that employs mostly zone, and they also perform better against zone when facing a more man-style defense. In Weeks 1-3, 5, 7 and 8, the Bears' offense faced average to above-average zone coverage rates, but they faced high man coverage rates in Weeks 4 and 6. Their performance in those spans is shown below.

When the Bears have faced more man coverage, their offense has gotten little done. However, when they’ve faced more zone coverage, they’ve been successful against man. The Bears also generated their two highest EPA per play marks of the season against zone when facing it less often, but they had by far their worst two weeks by EPA per play against man when facing more of it. This pattern is puzzling, and we’ll see if the Bears can figure it out in the coming weeks.

Overall, the Bears are lucky to field an above-average defense, since their passing offense led by Justin Fields has fallen well short of where it needs to be. He has struggled to find open receivers and is making poor decisions overall. If Fields can avoid sacks moving forward, the unit will be in much better shape. Chicago's upcoming schedule is not easy, though, with the Eagles and Bills on the slate back to back in the last few weeks of the regular season. Realistically, the Bears may not improve for a few years, given that they traded away key players ahead of the deadline for draft picks.