In the lead-up to the 2019 NFL Draft, the Tennessee Titans acquired quarterback Ryan Tannehill from the Miami Dolphins in exchange for a fourth-round pick. Tannehill was set to back up Marcus Mariota, who was heading into a make-or-break season on his fifth-year option, but midway through Week 6, Mike Vrabel had seen enough of the former No. 2 pick and called for Tannehill out of the bullpen. Things didn’t go great for Tannehill in relief, but either what he had shown in practice or what Mariota hadn’t shown all season was enough to earn Tannehill the starting job going forward.

The Titans then won nine of the next 12 games, including two playoff victories, one of which ended the New England Patriots dynasty and the other saw them slay a seemingly unbeatable Baltimore Ravens squad that was led by NFL MVP Lamar Jackson.

Mariota is now gone, and Tannehill is locked in as the Titans’ long-term starter having signed a four-year, $118 million contract this offseason.

The Titans possessed the requisite parts to make Tannehill’s rebirth possible: a playoff-ready roster that posted three consecutive 9-7 seasons despite mediocre quarterback play. And while no one thought that Tannehill was an elite quarterback, he was good enough with the right surrounding cast to show sustained periods of elite quarterback play last season.

The Buffalo Bills don’t find themselves in the exact situation the Titans were in a year ago, but there are strong similarities. They have made the playoffs in two of the last three seasons without particularly strong quarterback play, and their front office has also meticulously built a winning infrastructure designed to maximize the quarterback with improved offensive line play and one of the leagues deepest receiving groups.

What the Bills could use this season is their own Tannehill, and the recently released Andy Dalton — the hero of the team’s 17-year playoff drought —  should be the one to answer their call.

For some, Dalton is the definition of an average quarterback, a thoroughly uninspiring option for teams that dream of championships. But Dalton has produced multiple seasons of strong quarterback play — in 2013, 2015 and 2018 when he respectively ranked 13th, 7th and 12th in passing grade — when given ideal quarterback environments like the one the Bills have built going into this season.

If the Bills are willing to take a look at Dalton — even though the faithful still believe in third-year starter Josh Allen — they’ll have a perfect insurance policy against injury or a failed breakout, and they won’t waste a valuable season with the rest of the roster primed for success.

Bills have built a winner but have questions at quarterback

Since Sean McDermott and Brandon Beane’s arrival in 2017, the Bills have successfully built one of the NFL’s best defenses and have made vast improvements on offense. 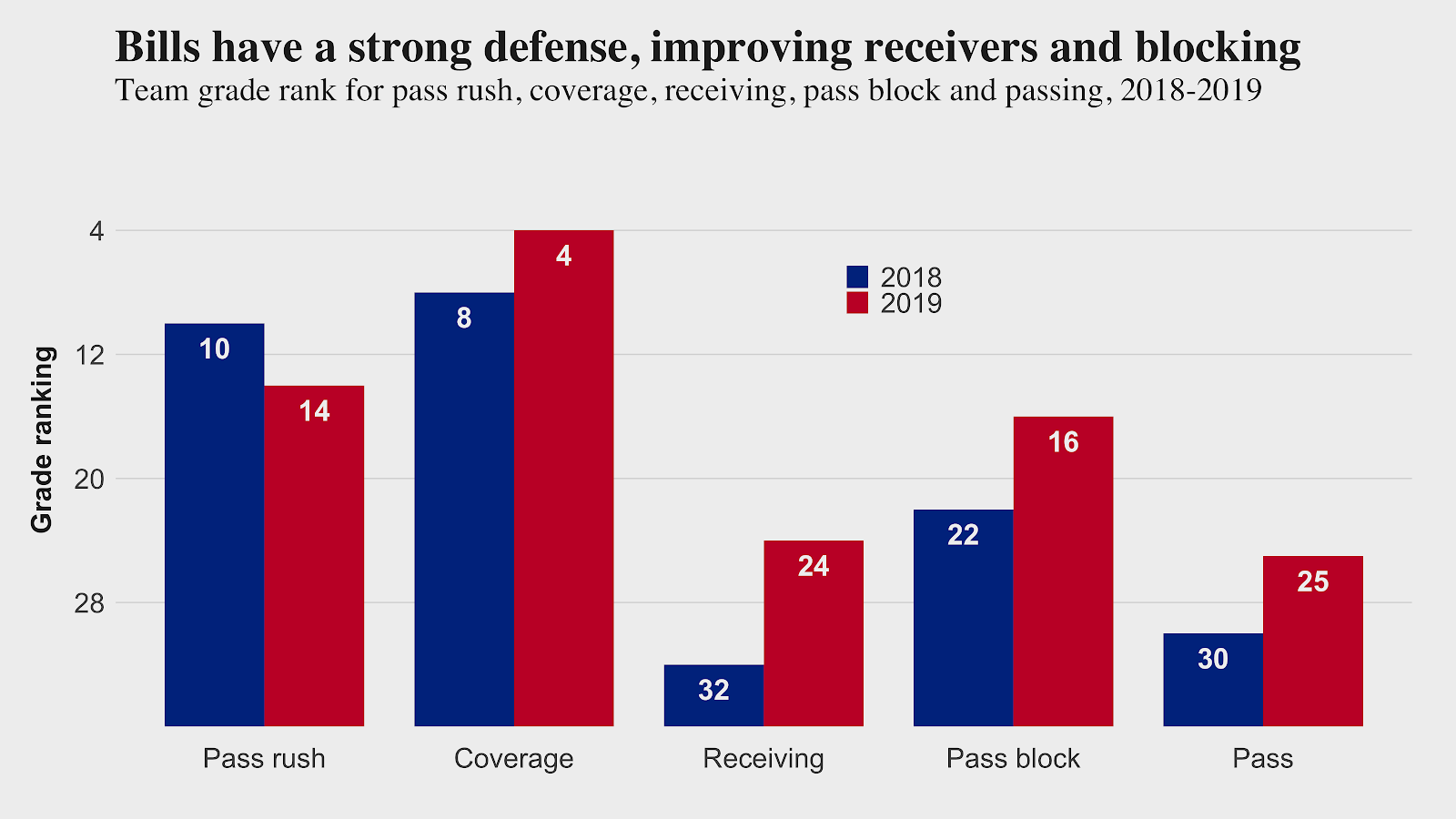 According to PFF grades, the Bills’ defense maintained its strength from 2018 to 2019, the receivers improved from league-worst to 24th and the pass blocking has improved from 22nd to 16th. Both the receiving and blocking units should continue to improve in 2020, given the addition of Stefon Diggs out wide, third-round tight end Dawson Knox entering his second season and an additional year for their rebuilt offensive line to gel after adding four new members in 2019.

The quarterback play also improved in 2019, though it wasn’t the second-year leap you would have expected from a successful top-10 pick. The Bills have been proactive in addressing needs and building quality depth across the roster, and how they approach the quarterback position this offseason should be no different.

Can Dalton be the answer?

Dalton has never been considered an elite option, but he has played well enough to produce success for his former franchise, the Cincinnati Bengals. During Dalton’s first five seasons in Cincinnati, the Bengals were 52-27-1 and went to the playoffs in five straight seasons. The Bengals haven’t had a winning record since, though it wasn’t because of a dramatic fall in Dalton’s play. His passing grade was 75.5 from 2016-19 versus 75.9 during the playoff streak from 2011-15. What changed was the quality of the rest of the roster.

There is more hope around Josh Allen entering the third year than there was for Mariota last season after four years of up-and-down play. The thing is, Allen hasn’t shown more than infrequent high-level play during his two seasons.

Allen posted passing grades of 58.0 and 61.4 in 2018 and 2019, ranking 28th and 26th in the respective seasons. Allen’s future is very much in doubt — an uncertainty that you don’t want hanging over a team with playoff aspirations, especially if the other quarterbacks on the roster are Matt Barkley and fifth-round rookie Jake Fromm.

It’s difficult to compare the performance of different quarterbacks, especially those with greatly differing career lengths. In an earlier analysis, I used a statistical technique called Bayesian updating to take the PFF passing grades for quarterbacks over time and forecast their performance going forward. This is the foundation of how I can compare Allen and Dalton. By properly weighing draft position, career performance and sample size, we can estimate the range of outcomes for both quarterbacks and then project how likely it is that one is better than the other. 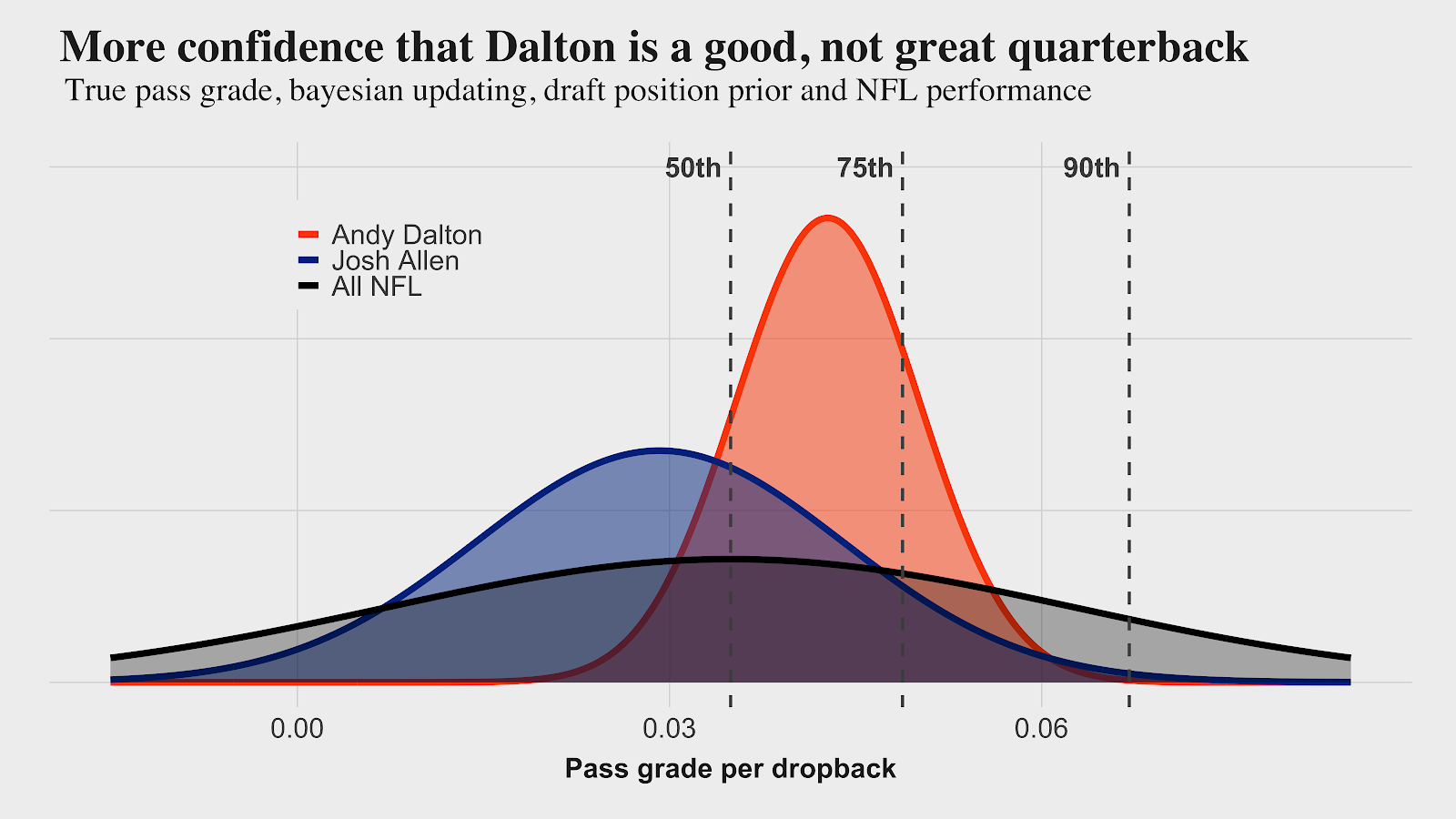 With more than five times the number of career dropbacks, were much more certain of who Dalton is at this point in his career. Dalton’s range of outcomes mostly exceeds the typical quarterback (percentiles based on all with 500 career dropbacks), though not much above the 75th percentile and certainly not in the 90th percentile. Allen has a wider range of outcomes with a shorter history of NFL play, but his curve is mostly below the 50th percentile — and even the higher end of his range doesn’t extend much beyond Dalton’s.

Running 10K simulations based on the above distributions gives us hard numbers of how likely each quarterback is to meet certain performance thresholds. 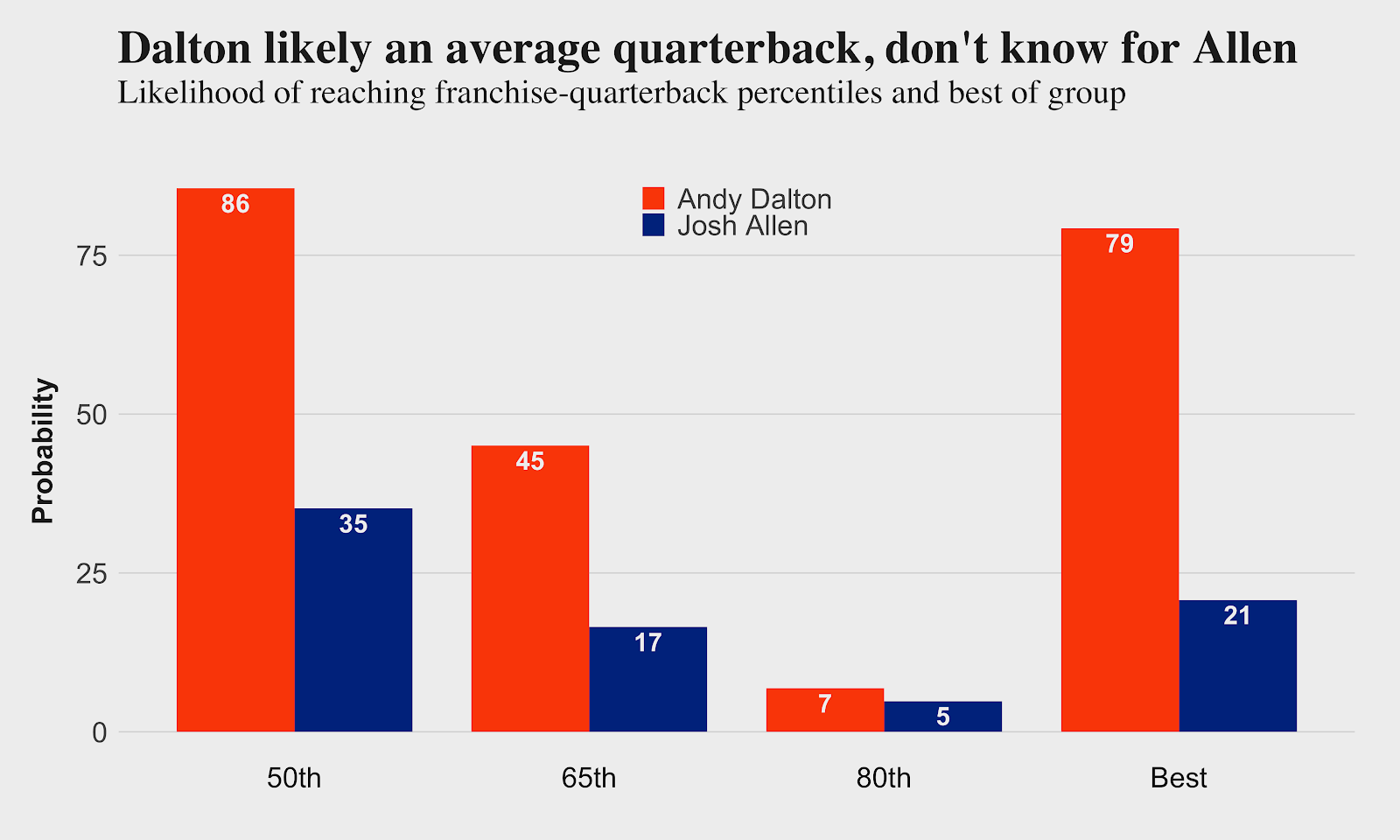 Dalton provides above-average quarterback play in 86% of simulations, ends up in the 65th percentile or better 45% of the time but breaches the 80th percentile in only 7% of simulations. This tells us what most know about Dalton: he’s probably good but not great, and there’s almost no chance he’s elite.

The simulations also show that there’s almost an 80% likelihood that Dalton is a better passer than Allen. Even with only two years of NFL play, we can practically eliminate Allen from being a potentially elite (or even a potentially great) quarterback. You don’t want to rush to judgment, but Allen’s passing grade has been consistently near the bottom of the league.

What Should the Bills Do?

According to the numbers, the Bills should not only sign Dalton, but they should immediately elevate him to the starting role. However, the numbers are a guide, not the answer.

A reasonable course of action would be signing Dalton explicitly as the backup who can mentor the younger Allen. He’d be the high-level backup who can keep aspirations of a deep playoff run on track if the risk-taking Allen suffers injury. With over $20 million in effective cap space, the Bills should also be able to outbid others for Dalton’s services.

What needn’t be said, is that the hook for Allen should not be slow or deliberate. If Allen doesn’t look like a new quarterback in 2020, then the Bills should move to install Dalton before valuable playoff positioning is lost.

It would be a dereliction of duty for the Bills to go into 2020 without a viable backup and alternative to Allen in place. Yes, they should hope that Allen is the quarterback they want him to be, but at the same time, they should recognize his flaws and shouldn’t be caught flat-footed if he fails.