What is the best fantasy football draft spot?

With virtually no exceptions, the answer is first. Drafters picking first overall win more often than any other draft slot, and it generally followers a fairly steady trend downward as you go through the round. We know this based on data from all the past years. Yet every year, the question arises: Is this the year to shoot for some spot other than first?

It’s not that there aren’t reasons to want to pick elsewhere. This year is an excellent example: There is a pretty clear top tier of four options to go first overall, and the four — Saquon Barkley, Christian McCaffrey, Ezekiel Elliott, Alvin Kamara — can just about go in any order and be fine. Doesn’t it stand to reason, then, that picking fourth is just as good as first? Sure, you get whichever of the four you are left with, but if they’re all about the same, and you can pick higher in the second round, isn’t that worth it?

Hey, maybe. Anything’s possible. I decided to put it to the test. Using our PFF DraftMaster mock draft tool, I conducted 60 mock drafts, five from each of the 12 draft slots. It was fully automated, so my own opinions didn’t matter at all. I then totaled each roster’s point total and found the average performance at each draft slot.

Conclusive? Nah. The sample size isn’t huge, for one, and this ignores any sort of waiver play from the equation, taking risky players you can replace later. But it’s definitely a data point. And here were the results. 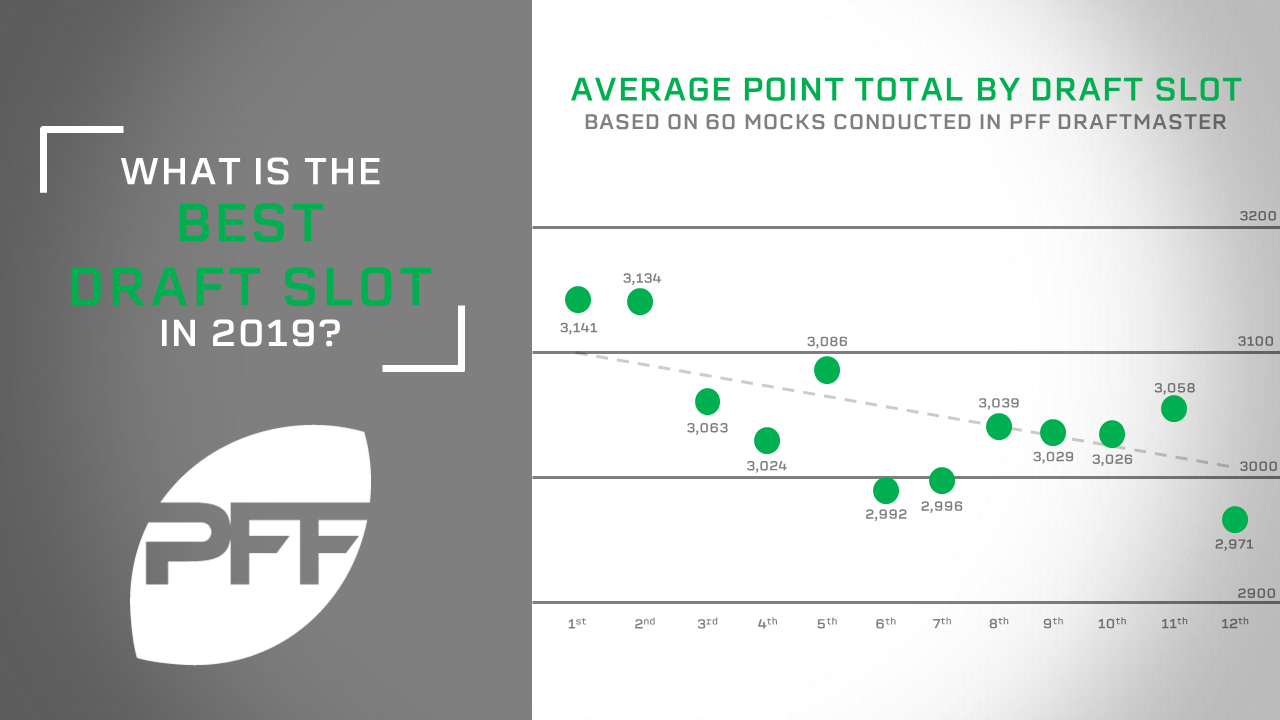 (EDGE and ELITE subscribers can conduct their own mock drafts in DraftMaster with a PFF subscription.)

Again, that isn’t conclusive, but the trends are pretty clear that at least in this sample, picking first overall is conclusively the best. And there’s a reason for that.

Think of it this way: The last players drafted in fantasy (other than handcuffs and such) are still reasonable expected to put up 120-140 fantasy points. Outside of the elite of the elite, players generally cap out at about 275 points. That means the players taken from the middle of the second round through the end of the draft (about 170 players) have a range of about 150 points. If you want easy math, we can be generous and say the range is 170 points. That is effectively a point per player in the draft value, if you assume our drafts go in perfect order (obviously they won’t, but the mistakes and successes tend to just about balance out, so it works). But then the range over the top round or round and a half of players is much wider, with the top scorers putting up much closer to 400 points.

(It is important to note that these aren't dramatic differences. You aren't screwed if you pick 12th. But if you have your choice, pick first. Always pick first.)

That’s really it. Part of our brain wants to think that each draft slot is on an even footing, because first and 24th is the same as fifth and 20th, which is the same as eighth and 17th, which is the same as 12th and 13th. After all, no one wants to pick last and already realize they are starting at a disadvantage. But it’s true. The first pick is the most valuable every year. And PFF DraftMaster shows that the 2019 season is no exception.